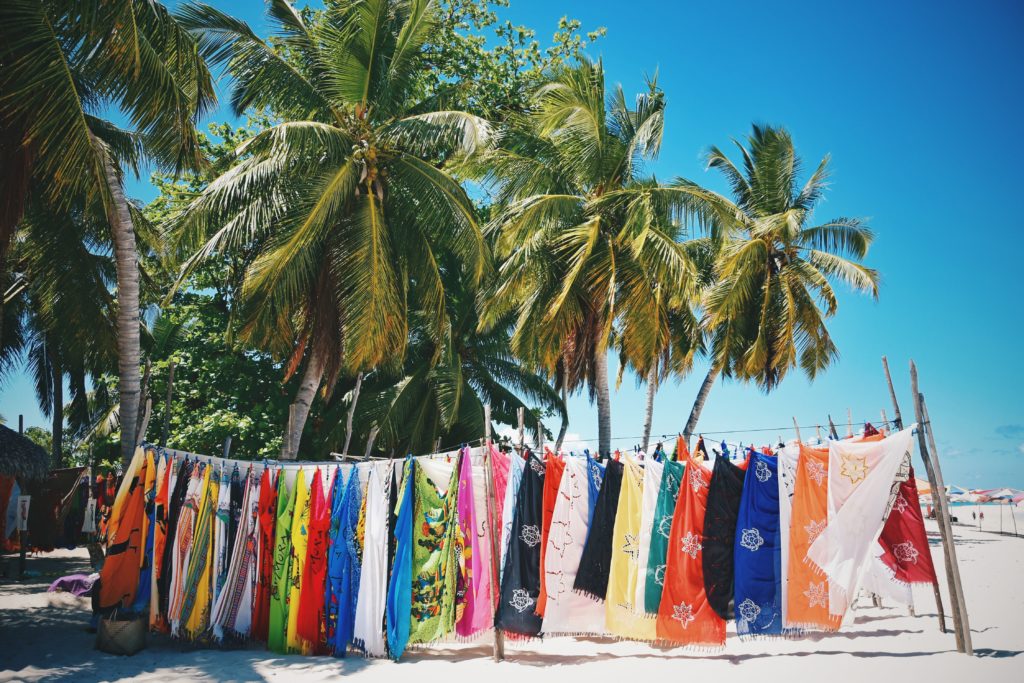 Loetitia Razanamarie never really set out to become a fashion designer — let alone launch her own brand — but the pandemic changed her plans in the most incredible way. After an intensive training course at the ESMOD Paris fashion school, this upcoming designer from Madagascar accomplished the impressive feat of launching her first collection of handbags made from Zebucq, a material she developed herself, made from coconut tree fibre.

It’s a considerable achievement at a time when all the biggest fashion houses seem to be launching into the race to find the materials of the future.

Fashion — the world’s second most polluting industry — is now being forced to reinvent, rethinking its production and turning to more environmentally friendly materials. As a result, luxury brands are partnering with start-ups or trying to develop their own innovative materials, such as Gucci’s Demetra, Bolt Threads’ Mylo, or the perhaps better-known Piñatex from Ananas Anam.

However, it wasn’t these issues that led Razanamarie to start manufacturing her own no-less-innovative material, Zebucq, but the desire to stand out, to offer something different, something which sparks curiosity, and which is unique. The result of a fortunate combination of circumstances, this adventure — which began in the midst of the pandemic — gave rise to the accessories brand Vazane by Lora & Zéboutin. It’s a brand that certainly stands apart from competitors, but which might never have seen the light of day.

From Madagascar to Strasbourg

Razanamarie was born and raised in Madagascar, and, in some way, it’s on her native island that her creative career began, albeit largely out of necessity. “I come from Madagascar, which is quite a poor country. Throughout our childhood, we dressed mostly with thrift stores or very poor quality products, so I started to have my clothes made, for going to parties or special events. I always wanted to stand out, to be original, so I didn’t copy what I saw in catalogues, but I gave instructions to the seamstress according to my inspirations of the moment.” And the results proved a hit.

Despite this success, Razanamarie never considered a career in the field, for the simple reason that no fashion design training was available in Madagascar, and that people generally need the means to juggle between fashion design and another profession in order to get by. She, therefore, turned to business administration studies but took a year off after her degree to learn to sew and to explore this passion, even if it still seemed inaccessible to her.

The first turning point came in 2011, when Razanamarie moved to France for personal reasons — to Strasbourg, more precisely. Her Madagascar diplomas weren’t recognised in France, so she spent five years working in the supermarket industry, as a self-service store employee — a job that sustained her, but didn’t exactly enthral her.

It was a wedding in Paris that made Razanamarie realise that her creative talents could set her on her way to bigger things. She chose to create her own outfit for the event, and to customise her shoes, which once again proved a great success. “I thought maybe there was something in that. And then other things happened in my personal life that made me realise that, if I didn’t do something, I might regret it, and I didn’t want to end up doing a job that I didn’t necessarily like. That was the trigger, and I decided to try my luck.” A few not particularly conclusive online courses later, and Razanamarie decided to head to Paris for an intensive training course at ESMOD, a reputed fashion school, where she specialised in accessories in order to broaden her skills as much as possible.

It was at this time, thanks to the Facebook page of her sister — who stayed in Sambava, a coastal city in Madagascar known for its coconut plantation — that Razanamarie stumbled upon handcrafted objects made of raw coconut fibre. “I found that interesting,” says the designer, who had the idea of using this material in what would traditionally be leather goods or accessories. The idea grew and developed until, in the midst of the Covid-19 pandemic — when successive lockdowns suddenly put paid to her second internship — the designer opted to take the plunge and start her own brand.

But it was far from a rash decision. The many months of lockdown allowed Razanamarie to research and develop her new material — which she is still refining today in her garage, now converted into a workshop. And only Razanamarie holds the secret to this new material, made from coconut fibre. It also allowed her to learn the basics of making leather goods like bags, alongside an artisan, if only to make her first prototype in Zebucq.  Unsurprisingly, the prototype proved a hit.

Coconut tree fibre: A material of the future

If you haven’t yet heard of Zebucq, something tells us that it’s only a matter of time. This new material, developed from coconut fibre hailing from the city where Razanamarie grew up, is characterised by its highly textured appearance, but also by the fact that it can only be worked by hand. This requires knowledge, but especially skills, which the designer has managed to master alone, with the help of her close relations and her husband.

“I’ve been asked why I don’t automate production. It is simply because it is a material that has a multitude of subtleties depending on how it is worked. The more I use it, the more I discover new ways to get various textures and appearances. It is a material that has a lot of potential, but this can only be realised by hand. My bags are very resistant and last over time because I have adapted their design to the constraints of the material,” explains the Vazane by Lora & Zéboutin creator.

Unlike many of the other ‘new’ and ‘alternative’ materials used to replace leather in the accessories world, Zebucq really isn’t like leather at all. “At first, I presented it as an alternative to leather, but in use, I noticed that it was nothing like that. It’s really a material in its own right, just as we discovered that raffia and bamboo were [also] good for making bags. In the end, I just discovered a material that was interesting to use to make certain [traditionally] leather goods. It is a plant-based material all of its own.”

The Lora & Zéboutin founder wants to be truthful with her customers about the fact that it’s not the environmental and sustainable qualities of coconut fibre that led her to develop Zebucq. Rather, it was about something she’s been fostering since her teenage years: The desire to stand out, to be original. But it’s also about setting herself apart as a designer — something that’s anything but easy in 2021.

Still, this outlook doesn’t prevent Razanamarie from seeing these natural fibres as the future of fashion, even if she’s not calling out any of the materials traditionally used in the accessories or leather goods trade, which have been coming under fire for some time. “I think these materials are the future because we can see that they are taking up a growing place [in the industry]. Simply because people have started to ask more questions about what they wear. I respect that a lot, but I think it’s not necessarily right to demonise leather either, because it’s a material that can be used in a proper way. Each thing has its place, so long as you do it correctly, and that you respect your own values.”

Transparency and authenticity are two essential values for the designer. “I don’t necessarily communicate about sustainability, even though it’s important to me, but I want to be honest about what guides me in my creations. So I tell the story as it really is. A lot of people have told me that I should put more emphasis on these environmental qualities, but I don’t want to lie. For me, the most important thing is to be true to myself and transparent.”

If one thing’s for sure, it’s that Vazane by Lora & Zéboutin bags are bags like no other. In fact, no two are alike — and that’s the beauty of hand-crafted products. Razanamarie tells us that it takes her at least one week to make her signature material, and then almost two weeks to create a handbag. In total, three weeks are necessary to craft these models, made using artisanal techniques. “I want to set myself apart as an [accessories] brand that has an exclusive material and offers unique models. Because that’s also the beauty of Zebucq, that you can have two bags of the same colour, but which will never be identical.”

Currently, the bags are priced between €320 (Rs 28,086) and €750 (Rs 65,826). This kind of price point is far from being accessible to most people, but it is justified by handcrafted manufacturing and by the fact that each model is unique. “These are goods that are handmade in an exclusive material. For a product positioned at a designer-made price point, it is very accessible,” says Razanamarie.

Aware of the outlay that this represents for many, the designer is working on a new range that can be designed more quickly and with less material. It will be available in three sizes, with a starting price set at €180 (Rs 15,798). It’s a product on which Razanamarie will make very little margin, but which could help raise the profile of this new brand and this exclusive material. Now it remains for the designer to hone and refine each of her models, to offer new options such as a shoulder strap, for example, and to enhance Zebucq — probably one of the only materials to have come about “thanks to” and in the midst of the pandemic.

Fashion Handbags Vegan Sustainable Fashion coconut
Lifestyle Asia
Here's where you can read the latest news and stories from Lifestyle Asia and our sister titles PrestigeOnline and Augustman, curated from all of our editions in Hong Kong, Singapore, Kuala Lumpur, Bangkok and India.
Luxury