The sneaker universe in India gets bigger every week with new drops. It comes as no surprise then that brands are looking to stand apart by creating new narratives and USPs around their new sneakers. For its newest RS 9.8 Sci-Fi sneaker that launched a week and a half ago, Puma created a special comic book that weaves the idea of the shoe into a story. And the man behind it is Bengaluru-based comic artist and author, Appupen a.k.a George Mathen, well-known creator of the parallel universe, Halahala.

Appupen, (“George makes me feel like a painting from the Bible!” he says) has created a limited-edition action hero comic titled ‘Get Grounded’, which is available on purchase of the sneaker, online and in stores. A true blue superhero story – RS 9.8 comes from the Galaxy of the Great Cat to save Earth from a black hole virus that threatens to devour it. He grants his earth pals the power of gravity through the RS 9.8 shoe and together, as the Universal Guardians of Gravity, they save the planet from annihilation.

“The theme of sci-fi and the numeric reference to gravity (RS 9.8 is 9.8 m/s2 – the acceleration of gravity from the earth’s surface) was set. I just used these and elements of the shoe’s design to create a visual that would connect it all,” explains Appupen.

The black holes in the story take inspiration from the elliptical design on the base of the shoe, while white, black, purple, and yellow form the colour palette that the story is created in. Of course, that gravity saves the day is a given, considering this is the theme of the shoe. 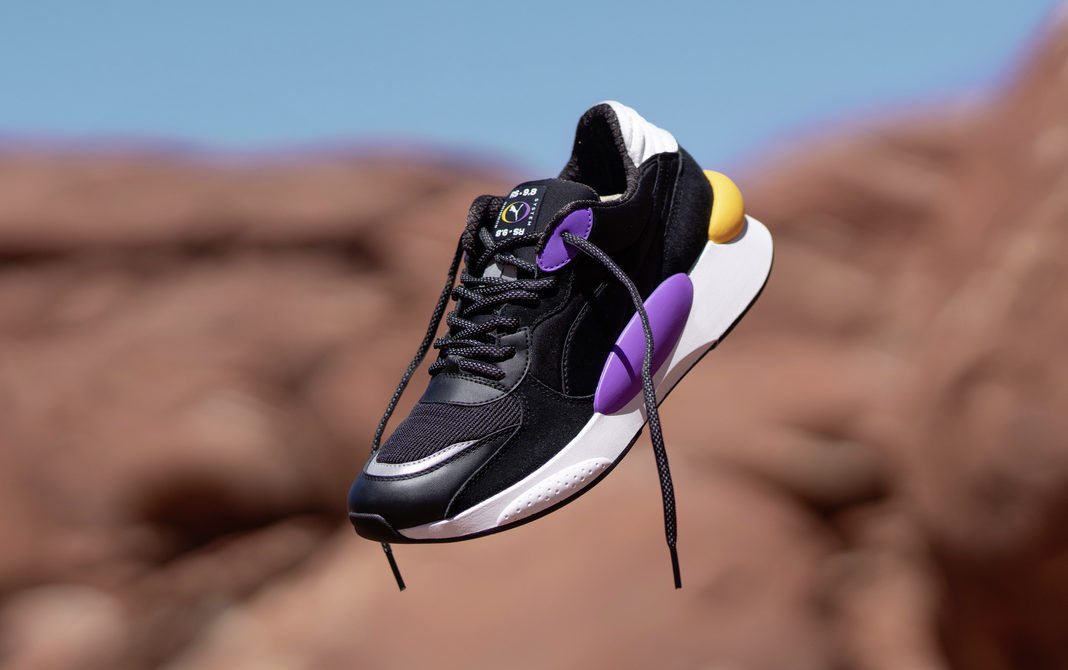 Every product at Puma has a story, but this time the brand wanted the sneaker to have more than a design-led story, says Jerry Sebastian, marketing manager, Puma India. “We wanted to create a parallel / fictitious universe which is inspired by the sneaker and becomes a talking point among our target audience. Appupen has a signature style, with a cult following, and he is one of the pioneers in the Indian comic scene. We couldn’t have asked for a better collaborator who nailed the character and story-line in his first attempt.”

Appupen has always worked in creative fields – advertising, tattooing, and music (he is a drummer) – and he began conceptualising stories since the early 2000s under the pen name (meaning ‘from the pen of Appu’, a riff on his pet name). Having tried other modes of expression, he took to comics mainly because “it did not need heavy investment, beyond my time and my back,” he chuckles. His works online were noticed and over time he has been published by Blaft, Harper Collins, and Amazon Westland.

Appupen’s world of Halahala is a tribute to nature, with stories that traverse the physical and mental; parts of this world can stand on their own as a book. Rashtraman, from Rashtriya, a world within Halahala is one that sees a new book self-published each year. “I am concerned about issues like personal freedom – of thought and expression. When these things get controlled or limited, I get upset, because that is where art speaks,” he says.

Appupen believes that all art should have an agenda now. “We don’t have the luxury to paint flowers and sit by it. We need to know how to make things better. We are fighting a side that has no message beyond the bubble-gum and noise. I think it is best done through humour and art. If my reader laughs along with me then I have a connect.”

The one concern Appupen has is that with graphic novels being expensive, one is often feeding into a comfortable crowd. This led him to create the online forum Brainded. “This is an attempt to get to more people. We give you small chunks and there is often no need to even click next. However, the flip side is the more the number of sentences you use, the lesser attention you get. And none of the issues we deal with can be reduced to a sentence,” he says.

While India doesn’t really have a graphic novel industry at the moment, he says that there are a lot of new creators and talent coming up. “They are seeing things develop in real time where once we had to wait for years for the next in a series. They pick up things fast and have lots of tools. I am hoping they will get past the honeymoon stage and will choose to stay around in this field,” he says optimistically.