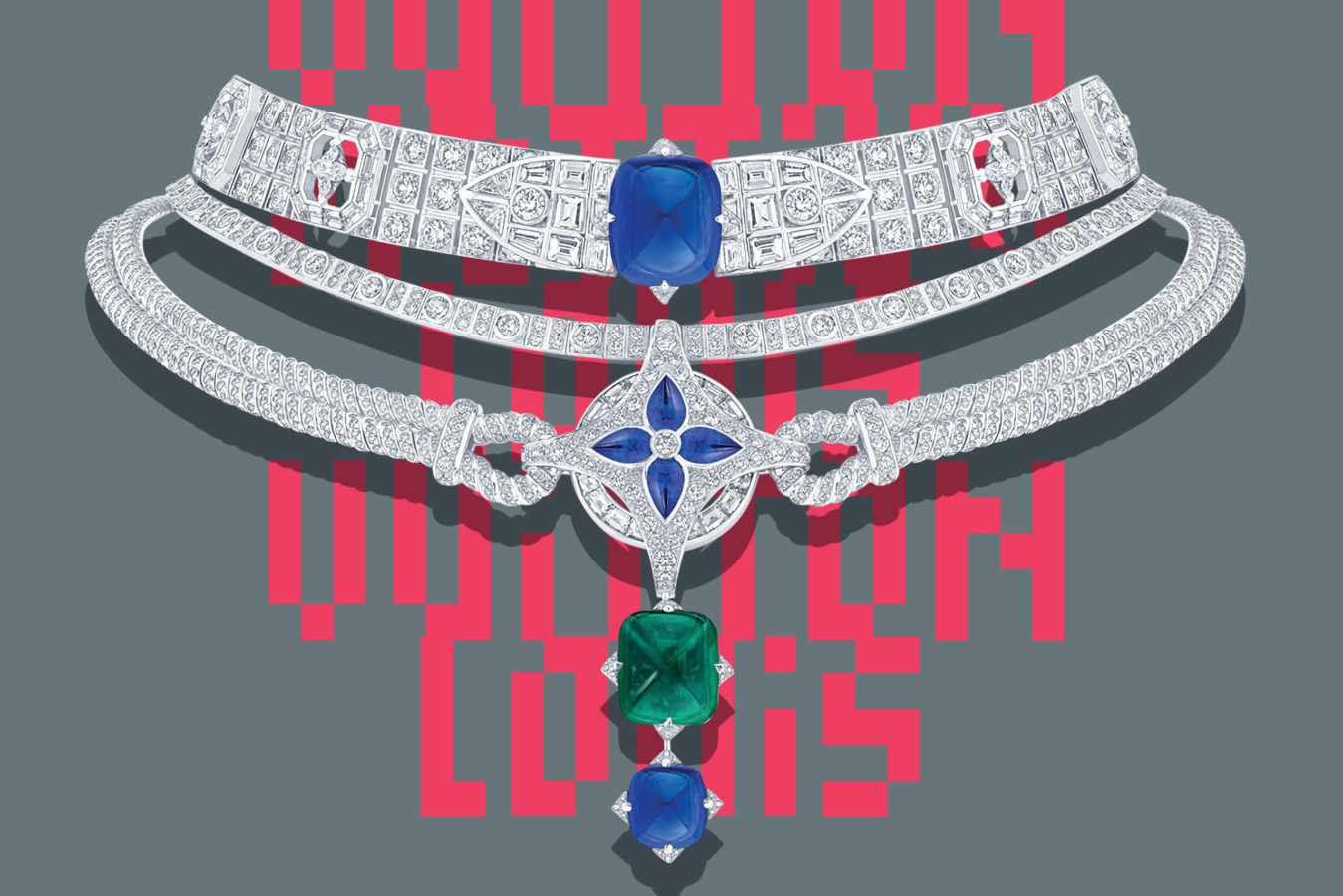 More relevant now in a world that demands adaptability, convertible pieces not only offer options to incorporate high jewellery into everyday wear, but their complexity is a great avenue for maisons to showcase savoir-faire, creativity and innovation.

These are the most unique transformable jewellery pieces 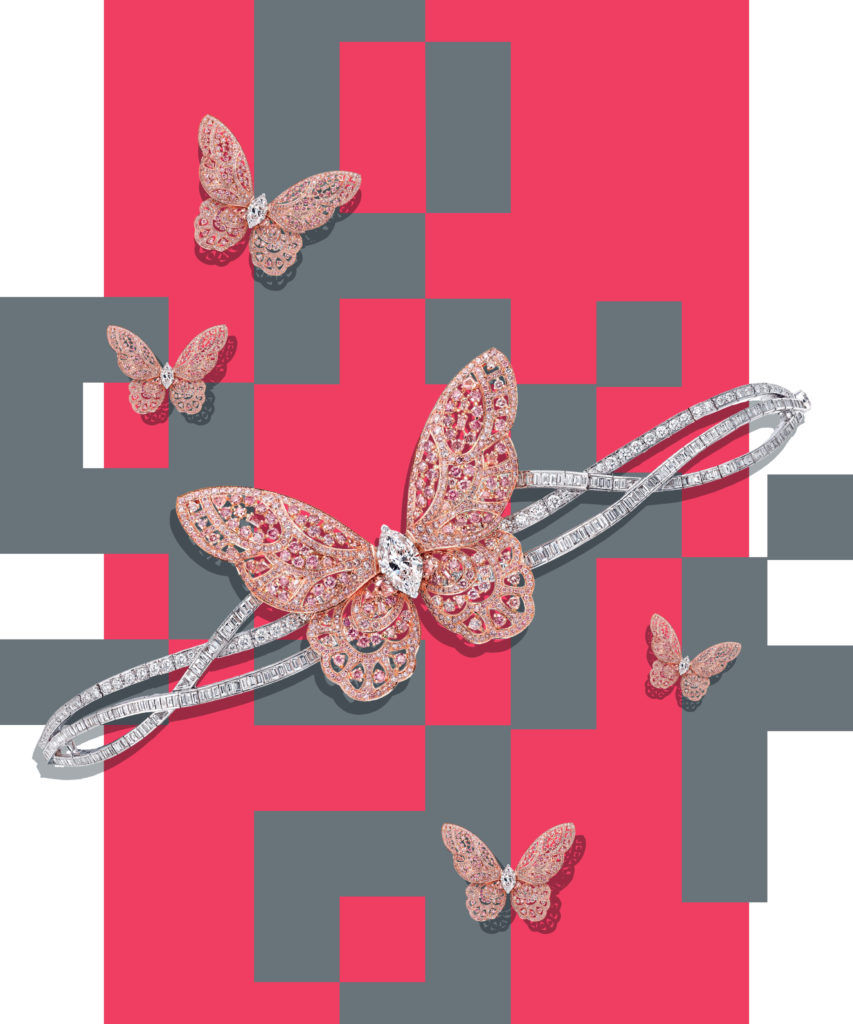 Not just a centrepiece on a platinum and white gold bracelet, this Graff intricately crafted pink gold butterfly – with a marquise diamond for its body and openworked wings set with dazzling pink and white diamonds – can also be detached to be worn as a brooch. Bringing a subtle sense of three dimensionality to the ensemble and resembling graceful vines that are interwoven ever so deftly, the bracelet band is composed of baguette and round brilliant-cut diamonds for varying light play and added visual interest. Both pieces are sold separately. 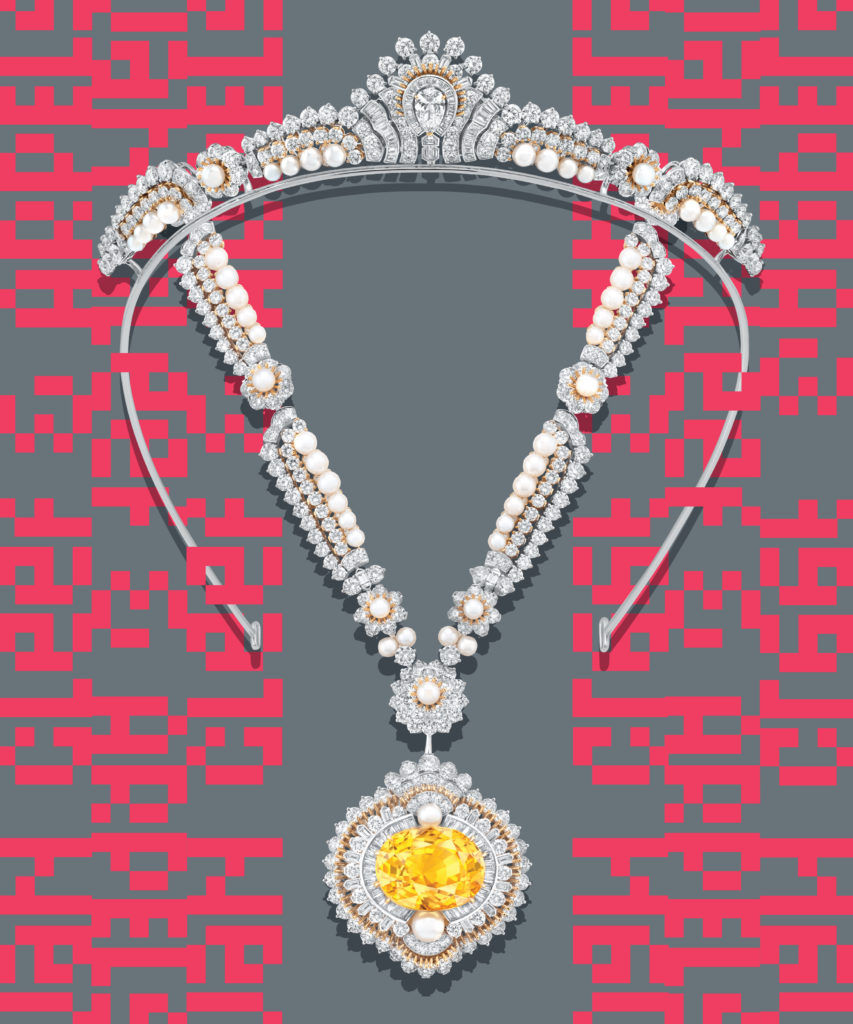 Named after the Greek Sun god, the Helios long necklace from the Sous les Étoiles high jewellery collection is an ode to the fiery orb. A stupendous Sri Lankan yellow sapphire of over 50 carats takes pride of place on this elegant composition of diamonds and cultured pearls. Encircled by yellow gold and diamonds, the horizontally set gemstone’s gleaming buttercup shade is revealed through a deep oval cut. A removable tassel of white cultured pearls may also be attached to the central pendant, while at the nape, a 1.11-carat pear-shaped diamond takes centre stage. Great attention has been paid to articulating the numerous elements for flexibility and ensuring the transformation mechanisms are easy to use. The white and yellow gold necklace can be worn in three possible lengths with or without the central yellow diamond pendant or tassel, as well as a diadem crowned by the pear-shaped diamond. A discreet gold structure at the back of the necklace will also cast a halo of light onto the hair when this piece is worn as a diadem. 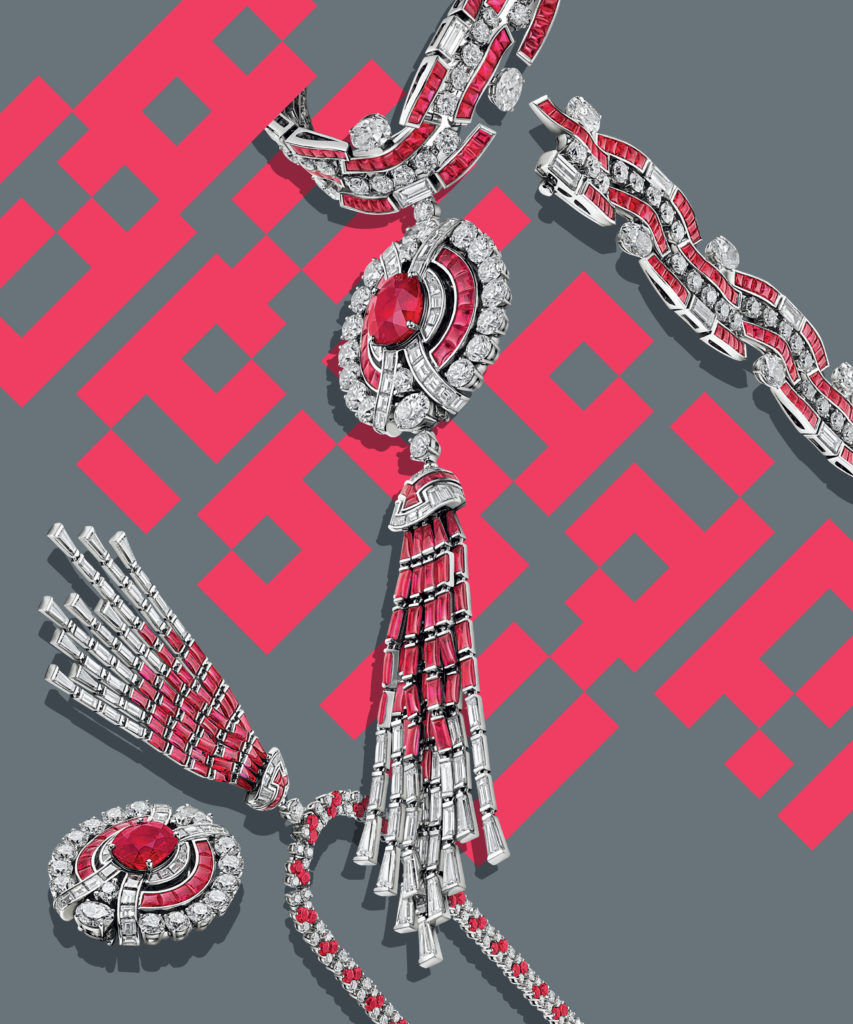 A superlative masterpiece from the Roman jeweller’s Magnifica high jewellery collection of 350 creations is this Ruby Metamorphosis necklace. No less than 2,500 hours were needed to craft the platinum piece that can be worn at least nine different ways. Composed of detachable pieces, including a diamond choker and chain, this convertible work of art flaunts an impressive 10.02-carat antique cushion-cut Mozambique ruby at its centre, as well as a sensual silk-like tassel featuring a mix of baguette diamonds and cabochon rubies. However, it is what‘s deftly concealed – a complex, articulated and carefully engineered structure that enables the jewel to be easily transformed – that is a true testament to Bvlgari’s jewellery-making prowess and innovation. 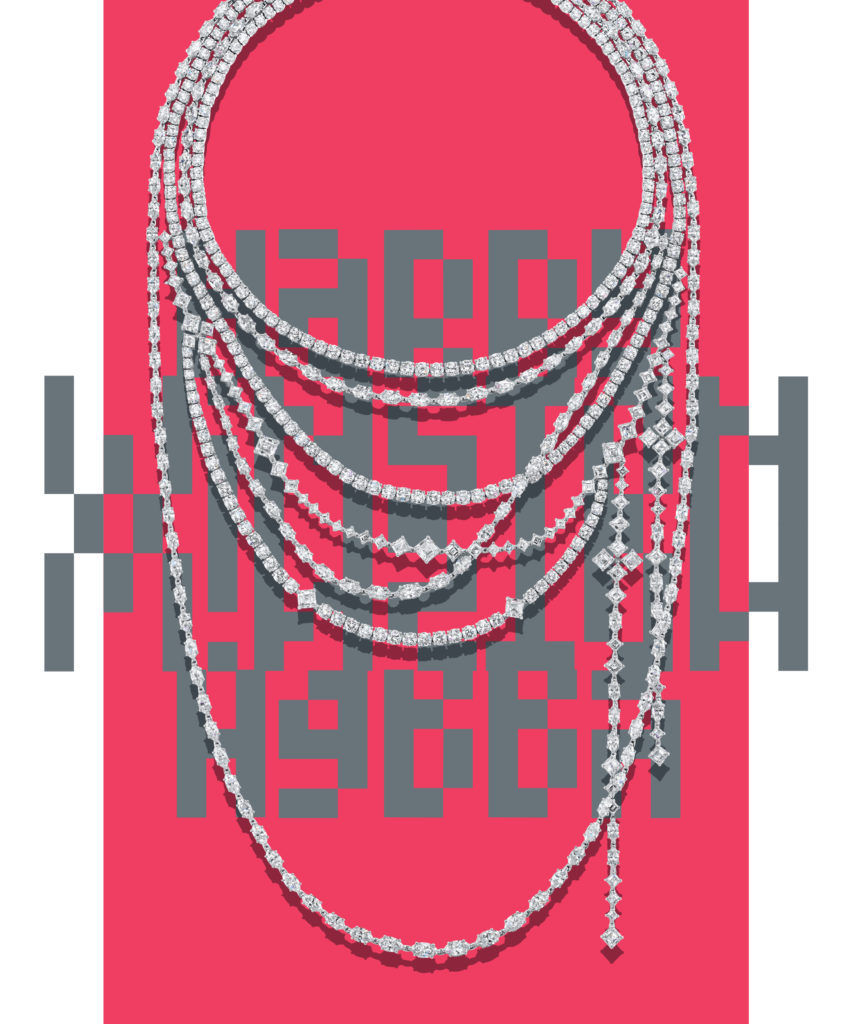 The Secrets by Harry Winston fine jewellery collection of 29 designs is a fitting tribute to the house’s founder Mr Winston’s own mystique and also his vision in design and craftsmanship. At first glance, the pieces are fine specimens of Harry Winston’s most celebrated designs presented through different themes. But there’s more than meets the eye, as each jewel hides an incredible secret, like this Secret Combination Necklace. Boasting 568 marquise, round brilliant and square emerald-cut diamonds weighing about 115.9 carats, the multi-tiered platinum creation comprises several strands of fancy-cut diamonds. These can be detached and converted into seven bracelet and necklace styles, ranging from cascading layers of delicate diamonds to a simple strand of brilliant-cut stones. 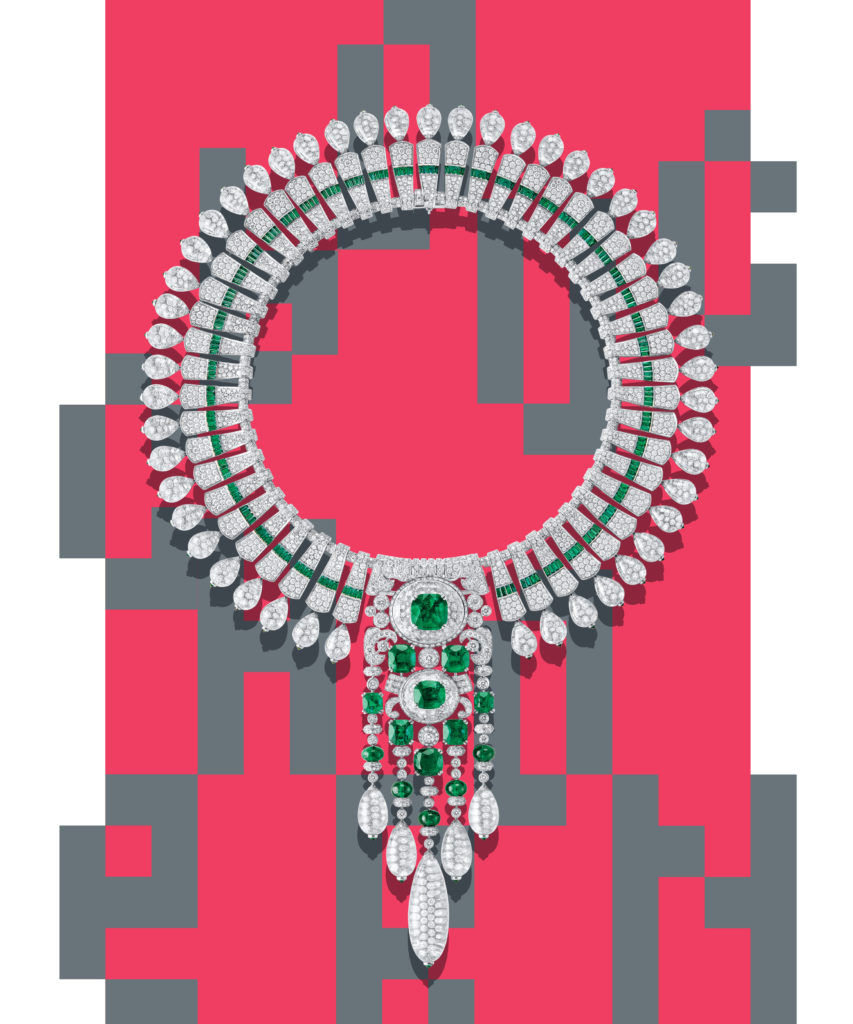 The New Maharajah Necklace is part of Histoire de Style, New Maharajahs, the latest high jewellery collection by Boucheron that pays homage to its largest commission by the Maharajah of Patiala in 1928. Claire Choisne, the maison’s creative director, took inspiration from the 149 original designs drawn for the maharajah by Louis Boucheron, founder Frédéric Boucheron’s son, and reimagined the new pieces for the 21st century. For the only colourful parure (it also comprises a pair of earrings) of the collection, nine Colombian cushion-cut emeralds totalling 38.73 carats with diamonds, rock crystal drops and emerald beads compose the main cascading motif, which can be detached and worn as a brooch. The necklace itself is an articulated diamond collar lined with baguette-cut emeralds. For a modern touch, Boucheron replaced the green gems set at along the fringe of the original design with rock crystal-encased diamonds to illuminate the creation. 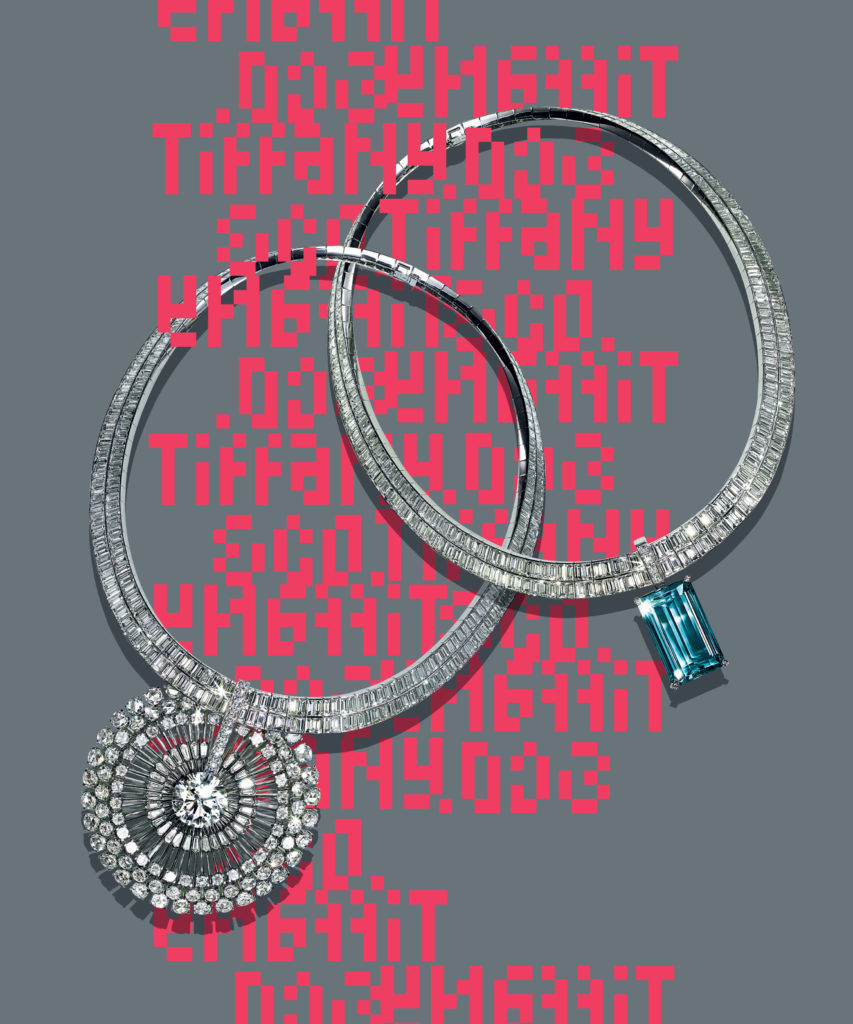 The Tiffany Blue Book 2022 honours the timeless beauty of flora with the Botanica high jewellery collection. The pieces are inspired by botanical motifs from the house’s heritage, ranging from orchid brooches to Louis Comfort Tiffany-designed dandelion hair ornaments and wisteria lampshades that have re-emerged as transformable jewels. The Dandelion necklace offers the owner five ways to wear the platinum piece. There are two interchangeable pendants: a dandelion medallion adorned with a show-stopping round brilliant diamond of over 12 carats, and a pendant showcasing a remarkable emerald-cut aquamarine of over 31 carats with an exceptional aqua blue hue bearing a slight hint of green. The necklace also comes in two forms – as a baguette diamond choker pictured here and a long diamond chain necklace set with a total of over 85 carats of mixed-cut diamonds. 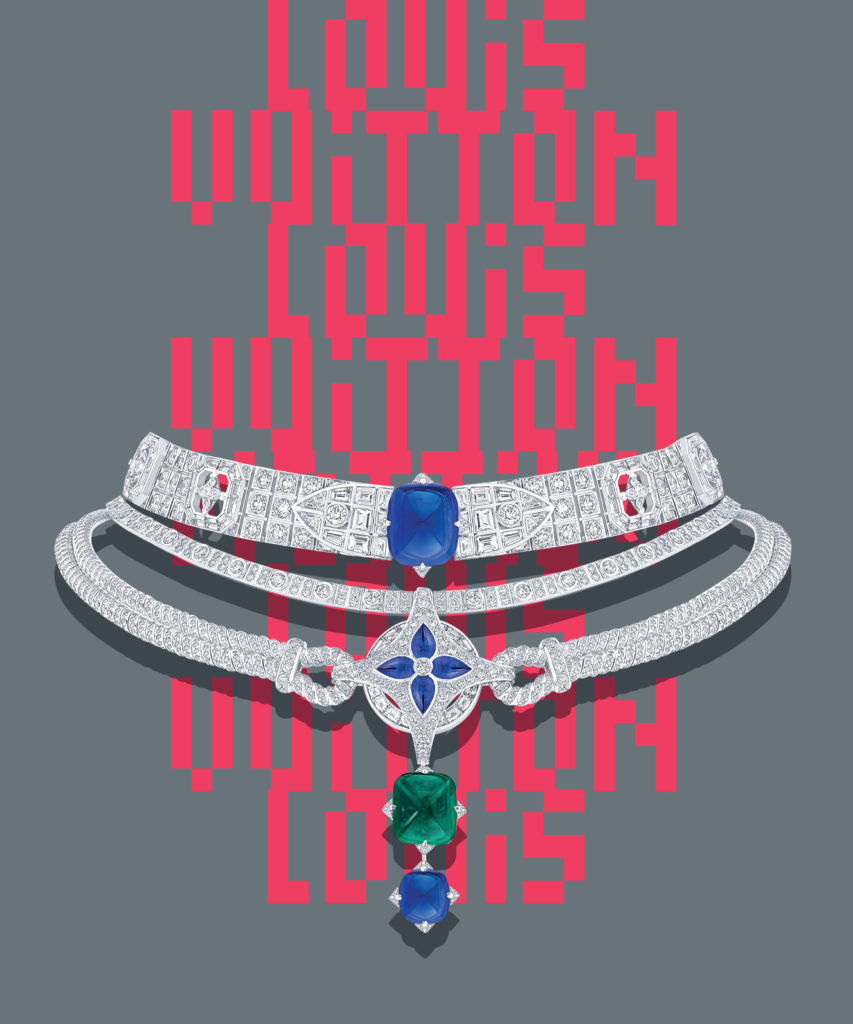 The centrepiece of the Bravery high jewellery collection created in honour of Louis Vuitton’s bicentenary, Le Mythe combines several of the maison’s emblematic signatures. These include the Damier or checkerboard pattern, studs and motifs inspired by trunk locks, rope and the Monogram flower. Gracing the triple-row necklace are three extraordinary sugarloaf cabochons: a 19.7-carat Sri Lankan sapphire in a sublime royal blue, a detachable 8.64-carat Colombian emerald with a rich green hue and a vibrant yet velvety-soft 7.11-carat Madagascan sapphire that’s also detachable. Over 1,300 hours’ work was required to create the phenomenal white gold necklace, which can be worn in 12 different permutations and is extremely supple. 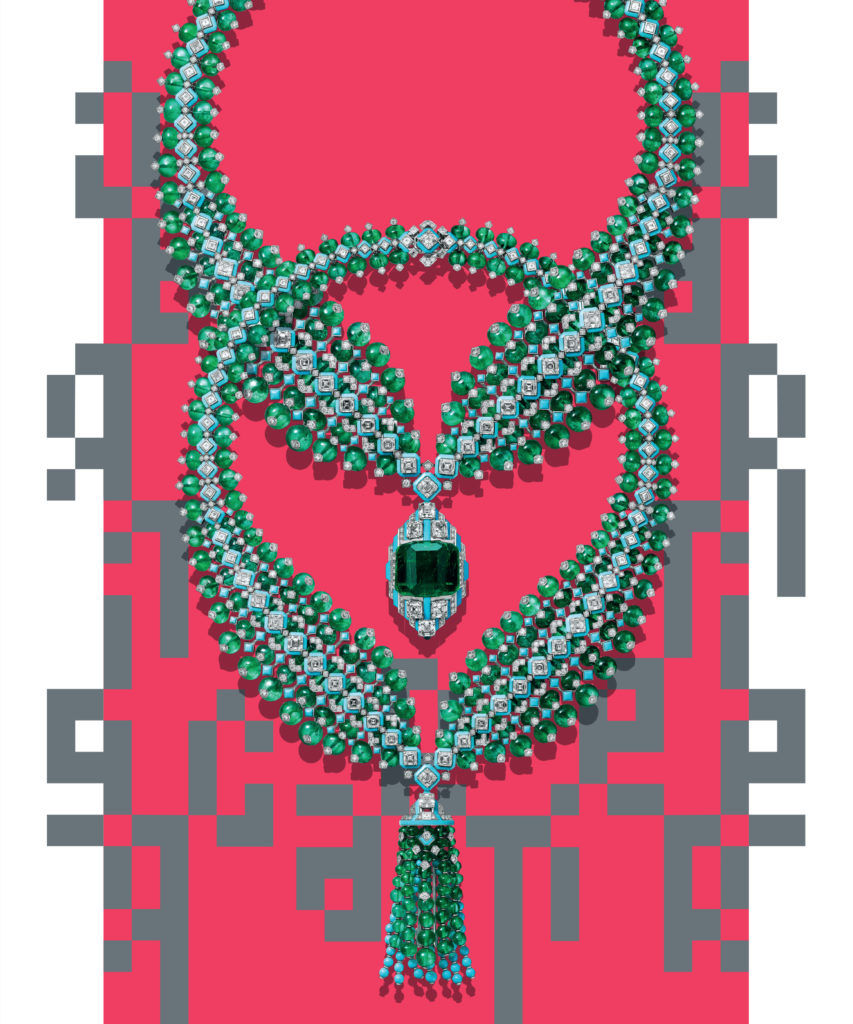 One of the new pieces that the maison will add to the astounding Sixième Sens par Cartier High Jewellery collection is the hypnotic Synesthésie necklace. Instantly captivating the gaze is its detachable central pendant of a 35.47-carat Colombian emerald nestled  among turquoise and diamonds. Boasting remarkable transparency, the stone features a large base and a step cut forming bevelled rectangles, displaying three facets that create the illusion of emeralds juxtaposed against each other. The eye is then led to an incredibly textured cascade of round emerald and square turquoise beads set with brilliant-cut or square diamonds. Volume and movement are afforded by the weaving of perfectly polished gemstones into an articulated lace design – executed with such finesse that it renders the platinum setting almost invisible. Also delivered with the necklace is a tassel of emeralds and turquoise, which is interchangeable with the central emerald pendant. This allows for the piece to be worn three ways.

This story first appeared in the April 2022 issue of Prestige Singapore.

Allyson Klass had her start in the publishing industry 20 years ago as a fashion stylist and writer. Over the years, she’s worked in various women’s and bridal magazines covering fashion, beauty and lifestyle. She’s now Deputy Editor of Prestige Singapore and oversees the watches and jewellery beats. Off duty, she enjoys spending time with her family and searching for the next beach holiday destination.

Zhang Ziyi
Sign up for our newsletters to have the latest stories delivered straight to your inbox every week.

Looking for a little sparkle? These are the biggest trends according to Natural Diamond Council