What comes to mind when you utter the word “elegance”? We enlist the help of Emporio Armani to paint us a picture.

Isn’t it alarming? What is she, a bird?

A witty exchange between Fredrik Egerman and Desiree Armfeldt in late Stephen Sondheim’s A Little Night Music (1955) is a charmingly timeless quarrel between two ex-lovers that many might find themselves reflected in. In the 2009 revival of the musical comedy, Catherine Zeta-Jones as Armfeldt bore a parure of pearls and diamonds and an elegant updo punctuated with white feathers. A spitting image of sophistication of the year 1900.

Elegance is timeless, and gemstones, pearls and precious metals are its unwavering ambassadors. And, coincidentally, it’s the realm where Emporio Armani never misses a mark. Its latest collection of watches and jewellery pays homage to such symbols, namely the mother of pearl.

Known among the Ancient Greeks as a purity and wisdom regalia, mother of pearl is a dial choice both extraordinary and logical, which Emporio Armani is well aware of. The women’s collection, presented by Emporio Armani’s new ambassador for Greater China and Asia Pacific, Wenqi, features two timepieces, crafted from 50% recycled aluminium. One of the watches is presented in an art-deco-inspired squared silhouette with a five-link metal bracelet in an arrestingly icy rose-gold hue. The other model is slightly more modern – the large circular dial of either white or black mother of pearl is housed within a crystal-studded bezel. The fans of the house’s Horlogerie can choose whether they like this style with a black or green leather strap. Both watches boast two-hand automatic movement.

And now on to the jewels. Although the mother of pearl is not featured in Emporio Armani’s range of jewellery, it’s echoed in spirits through tasteful black-and-white lacquer motifs. Those are presented as rings with rose-gold-coloured eagles etched onto them. There is also a dainty parure in the same rose-gold tone, studded with star-and-crescent charms framed with glimmering crystals. 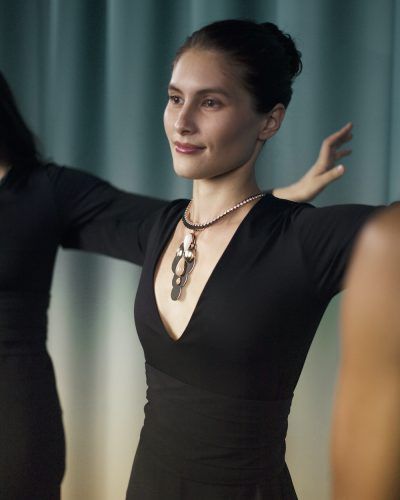 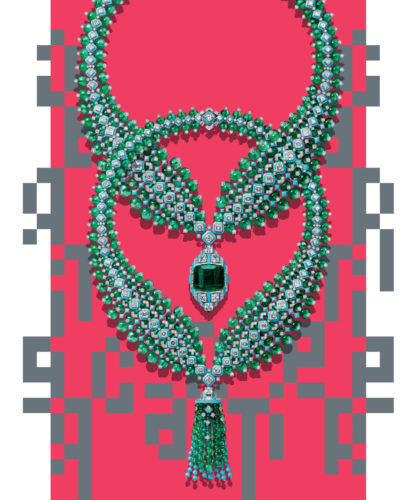