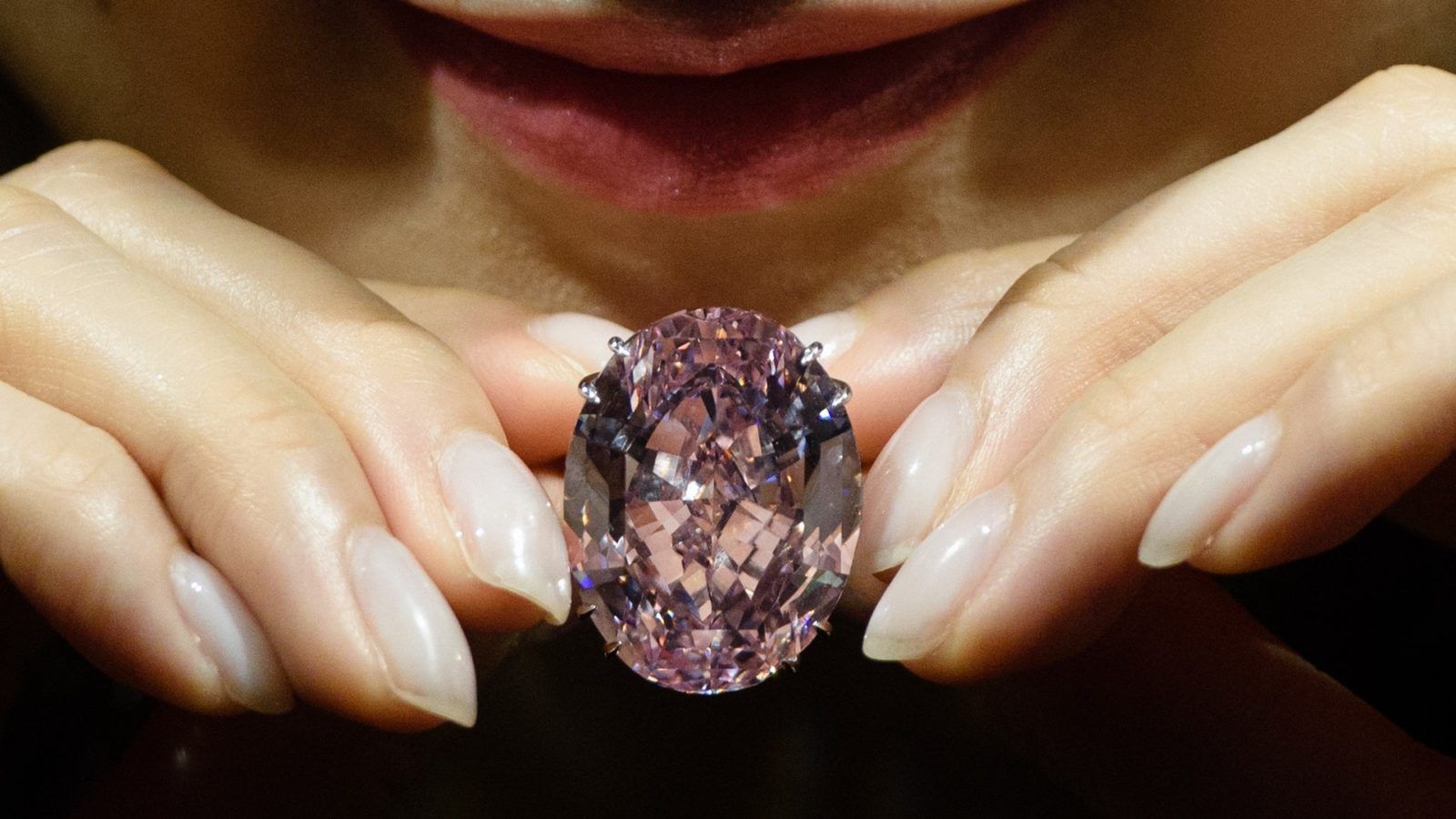 On 27 April 2022, the De Beers Cullinan Blue will be up for sale at Sotheby’s Hong Kong. At an estimated value of USD 48 million, it is set to become one of the most expensive diamonds ever sold at an auction.

The De Beers Cullinan Blue was discovered as a rough stone in South Africa’s historic Cullinan mine in April 2021. According to Sotheby’s, the 15.10-carat gem is the largest and most valuable blue diamond ever to be sold at an auction. It is also the largest internally flawless step-cut vivid blue diamond ever graded by the Gemological Institute of America (GIA).

It is noteworthy that De Beers Cullinan Blue is the first blue diamond weighing over 15 carats to have come to the auction table. Only five blue diamonds of over 10 carats have previously been sold at auctions.

Style
Why is it expensive: The De Beers Cullinan Blue Diamond being sold for $48M

Additionally, diamonds are among the costliest gems in history, prized for their beauty, shine and rarity. Thus, the estimated value of De Beers Cullinan Blue does not come as a surprise.

Grading and certification of priceless diamonds

The value of all diamonds is measured as a combination of four Cs — carat, cut, colour and clarity. Other than the GIA, diamonds are rated by the American Gem Society (AGS). Together, they are the two most reputed diamond grading and certification bodies in the world.

Although some of the world’s most famous diamonds are deemed priceless, there is no sale record of these most sought-after gems in history. Moreover, some of them have not even been evaluated in recent years, which could have determined their estimated price. Others, especially pink and blue diamonds, have been auctioned across the world for record prices.

Koh-I-Noor means ‘Mountain of Light’, and the gem is considered the world’s most famous priceless diamond. Originally weighing 793 carats, it has been cut and polished over centuries into the present form of a 105.6-carat gem.

It is widely believed that the diamond was mined during the reign of the Kakatiya dynasty (11th to 12th century) in India’s Golconda region. Later, it came into the possession of the Mughals. When Nader Shah of Persia sacked Delhi after defeating Mughal emperor Muhammad Shah, he took the diamond along with the Peacock Throne, in which it was encrusted.

In 1813, the diamond came into the possession of Sikh ruler Maharaja Ranjit Singh before eventually falling into the hands of the British.

Mined in South Africa in 1905, the Cullinan diamond originally weighed 3,106 carats — the largest rough diamond in history. However, it is now a collection of 105 gems of different cuts and weights.

The Cullinan, one of the most magnificent diamonds in the world, was named after Thomas Cullinan, the chairman of the mine. The worth of the stone would be an estimated USD 400 million in the current market.

There are nine large pieces of the diamond, totalling approximately 1,055 carats, besides other smaller cuts.

The biggest piece is known as Cullinan I and weighs 530.20 carats, making it the largest clear cut diamond in the world. The Cullinan I is mounted on the spectre of Queen Elizabeth II.

The Cullinan II, weighing 317.40 carats, is part of the Imperial State Crown. These are also referred to as the ‘Star of Africa’ and ‘Lesser Star of Africa’, respectively.

Jean Baptiste Tavernier, a French traveller, purchased a 112-carat diamond, which eventually came to be known as the Hope. It is believed that it was found in the same Golconda mine from where the Koh-i-Noor came. In his records, Tavernier described that the diamond had a “beautiful violet” colour.

Tavernier sold it to King Louis XIV. Over the years, it came to be recognised as the “Blue Diamond of the Crown”. However, the diamond was stolen in 1792 and emerged in London in 1812. After changing several hands, including King George IV, and crossing the Atlantic Ocean, the diamond ended up in the Smithsonian Institution in 1958.

The Hope diamond has remained in the Institution’s collection ever since and has been publicly displayed outside of Smithsonian only four times. While the weight of the diamond is 45 carats, its estimated worth is USD 200-350 million.

Even though the De Beers Centenary Diamond was discovered in the Premier Mine in South Africa in 1986, its existence was announced two years later at the 100th anniversary of De Beers in Kimberley. This is how it got its name — Centenary.

Weighing 599 carats, it was one of the world’s largest top-colour diamonds. The Centenary was then cut down into a heart-shaped gem of 273.85 carats with 247 perfectly aligned facets. The GIA certified the diamond’s colour as D — the highest rating for colourless diamonds — and internally and externally flawless in clarity.

At the time of its unveiling in 1991, it was the largest known colourless modern-cut diamond. The Centenary has never been valuated, but it was insured for USD 100 million before it was put on display in 1991. No one knows who owns the diamond and therefore, its current location remains a mystery.

Oval in shape, the internally flawless gem is the world’s largest vivid pink diamond. Though the exact location is unknown, it was mined by De Beers in Africa in 1999. The stone weighed 132.5 carats at the time. For over two years, experts from The Steinmetz Group cut and polished it into a 59.60-carat diamond.

It was first displayed in public in Monaco in 2003. At the time, it was known as the Steinmetz Pink diamond.

In April 2017, the Pink Star was sold for USD 71.2 million at a Sotheby’s auction in Hong Kong to city-based jewellery company Chow Tai Fook. The owner of the jewellery renamed it CTF Pink Star in honour of his father.

To date, it is the most expensive diamond ever sold at an auction.

Before the CTF Pink Star, the Oppenheimer Blue was the costliest diamond to have been sold at an auction when it went under the hammer for USD 57.5 million at Christie’s Geneva Magnificent Jewels sale in 2016.

The 14.62-carat diamond, which is graded as a fancy vivid blue diamond, was named after its owner Sir Philip Oppenheimer, whose family once controlled the De Beers Mining Company.

It is an extremely rare diamond because only 10 percent of all blue diamonds are larger than a carat. The emerald-cut diamond has a VVS1 clarity grade — a grade below Internally Flawless.

In November 2015, the vivid blue diamond sold for USD 48.4 million at a Sotheby’s auction in Hong Kong. At the time, the 12.03-carat diamond was the costliest ever to have been sold at an auction.

The Blue Moon diamond, as was known at the time, was bought by billionaire Joseph Lau for his daughter. He renamed it ‘Blue Moon of Josephine’ after her.

In 2014, the diamond was discovered as a 29.6-carat rough cut in the Cullinan mine by Petra Diamonds in South Africa. Petra sold it to Cora International, which gave the diamond its present shape.

The Graff Pink diamond was last sold for USD 46.2 million at a Sotheby’s auction in 2010, making it the costliest transaction at the time for a diamond at an auction. It gets its name from its current owner — Laurence Graff of Graff Diamonds.

The 24.78-carat Fancy Intense Pink emerald-cut diamond was not seen on the market for 60 years before the sale. After Graff acquired it, his team worked on further enhancing the look of the diamond. As a result, the Graff Pink is now a 23.88 carats Internally Flawless Fancy Vivid Pink diamond. Already rare because of its colour and size, the gem became even rarer.

The history of the diamond is not very clear. Before Graff, its owner was jeweller Harry Winston who sold it in the 1950s to an unknown buyer.

Style
12 most exquisite vintage engagement rings to pop the question

The Princie is one of the world’s best known pink diamonds. In 2013, it sold at a Christie’s auction in New York City for USD 39.3 million.

Like many other highly valuable diamonds, the 34.65-carat Princie comes from the mines of the Golconda region. According to Christie’s, it was discovered around 300 years ago. One of its owners was the Nizam of Hyderabad, described as the richest man in the world by Time magazine in 1937.

The diamond got its name in honour of the Prince of Baroda, son of Maharani Sita Devi, who attended a party thrown by its last owner Van Cleef & Arpels in Paris.

This is the largest fancy vivid orange diamond to have ever been sold at an auction. It was purchased for USD 35.5 million at Christie’s Geneva Magnificent Jewels sale in 2013.

The 14.82-carat, pear-shaped stone was found in South Africa and was owned by early-20th-century Bolivian industrialist Simón Iturri Patiño, famously known as ‘The Andean Rockefeller’.

Like many other diamonds, the Sancy diamond, too, originated in India and had many owners. Weighing only 55 carats, the diamond resides in the Louvre Museum in Paris, France.

It is believed that the first owner of the diamond, following its discovery in India, was Charles the Bold, Duke Burgundy. It was passed on to his cousin, King Manuel I of Portugal, and then to the latter’s heir Dom António. When the Spanish threatened Dom António, he fled with the diamond and used it to fund his battle.

Eventually, it reached Nicolas de Harlay, seigneur de Sancy, a French Ambassador to Turkey, in 1570, after whom the diamond was named.

The diamond changed notable hands such as King Henry III, King James I and King Louis XIV over the following few centuries till it came into possession of William Waldorf Astor in 1906. The diamond was sold by the Astor family to The Louvre for USD 1 million in 1978.

Diamond Blue Diamond pink diamond Koh-i-Noor De Beers Cullinan Blue
Manas Sen Gupta
Manas enjoys reading detective fiction and writing about anything that interests him. When not doing either of the two, he checks Instagram for the latest posts by travellers. Winter is his favourite season and he can happily eat a bowl of noodles any time of the day.
Travel Culture Entertainment Food
Sign up for our newsletters to have the latest stories delivered straight to your inbox every week.