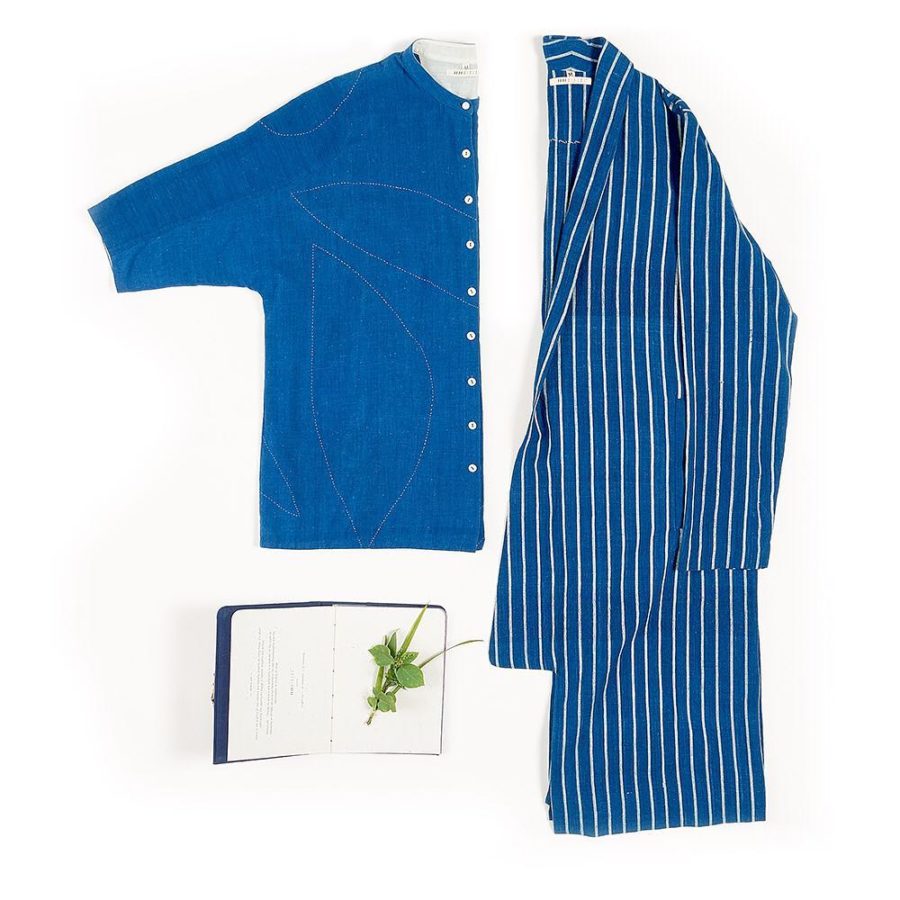 Khadi stands as a potent example of centuries-old Indian hand-spun textile traditions. An insignia of everything swadesi during India’s independence struggle, the textile has become an ultimate representative of self-reliance.

The fabric was adapted by the intellectuals, favoured by the likes of Rabindranath Tagore and Subhas Chandra Bose. With changing times, khadi became a widely popular fabric among the patrons of Indian craft culture, once again finding its way into their wardrobes. It is the canvas the likes of Ritu Kumar, Rohit Bal, and Abu Jani and Sandeep Khosla, the original school of Indian designers, used to mirror Indian traditions via their work.

However, the evolving fashionscape is seeing a new clique of creatives who are questioning stereotypes by writing a new vocabulary of fashion with khadi. For anyone who wants to make a statement, there is a whole spectrum of Indian designers that have led fabric interventions by creating contemporary iterations of khadi. We round up the best names for you.

Ace bridal couturier has garnered a cult following owing to his decadent lehengas and jewellery. However, Sabyasachi Mukherjee has time and again shared his admiration for khadi. His exquisitely embroidered lehengas and lightweight anarkalis make a strong case. Even as a part of his latest Summer 2020 line, Mukherjee has rolled out interesting renditions of traditional Indian sarees in khadi.

For anyone intrigued by Indian hand-painting techniques such as Kashmir’s Kalamkari to modern renditions of traditional miniature paintings, Gaurang Shah’s rich repository offers ample inspiration. Recently, as a part of a travelling exhibit that opened in Delhi, Shah created a collection of hand-spun khadi fabric sarees with pallus featuring handwoven paintings by the artist Raja Ravi Varma using vegetable dyes. In case you are looking for cool, wearable khadi blends, Shah’s work is for you.

Delhi-based Gaurav Khanijo aces the art of making Indian fabrics cool, as seen in his experiments with Khadi. Imagine precise cuts, sharp silhouettes, and subdued colour schemes – all crafted from 500-count khadi linen. From jumpsuits to bandhgalas to dhoti pants, his wide range of offerings won’t let you down.

There is a sense of nostalgia and effortlessness that makes every creation by Maku Textiles’s Santanu Das unique. From using luxurious mulberry silks to handwoven jamdani fabrics, Das is a recognizable name in slow fashion. His experiments with khadi cotton and indigo dyes have garnered rave reviews worldwide. For those intrigued by khadi breezy shirt dresses, pleated skirts, light shrugs, he is the designer to explore.

Woolmark Prize winner Ruchika Sachdeva needs no introduction. She can be credited for working with interesting khadi iterations. Her signature khadi-panelled shirt dresses, wide-legged trousers, and jackets have fetched her a loyal fan following.

Spearheaded by Mia Morikawa and Shani Himanshu, 11.11 is a label known for its 100 per cent khadi cotton offerings. Imagine slouchy jackets, blazers, trousers in khadi cotton and hand-dyed indigo. Although their experiments with khadi don’t stop at apparels, they also design beautiful totes apart from other accessories. For those on a lookout for something edgy, check out their range of khadi denim.

Yadvi Agarwal’s love for everything khadi and hand-painted reflects her label Yavi. Packed with quirky shirts, pleated trousers and dresses, her love for impressionist paintings, all done by hand on khadi canvas is pure fashion goals.