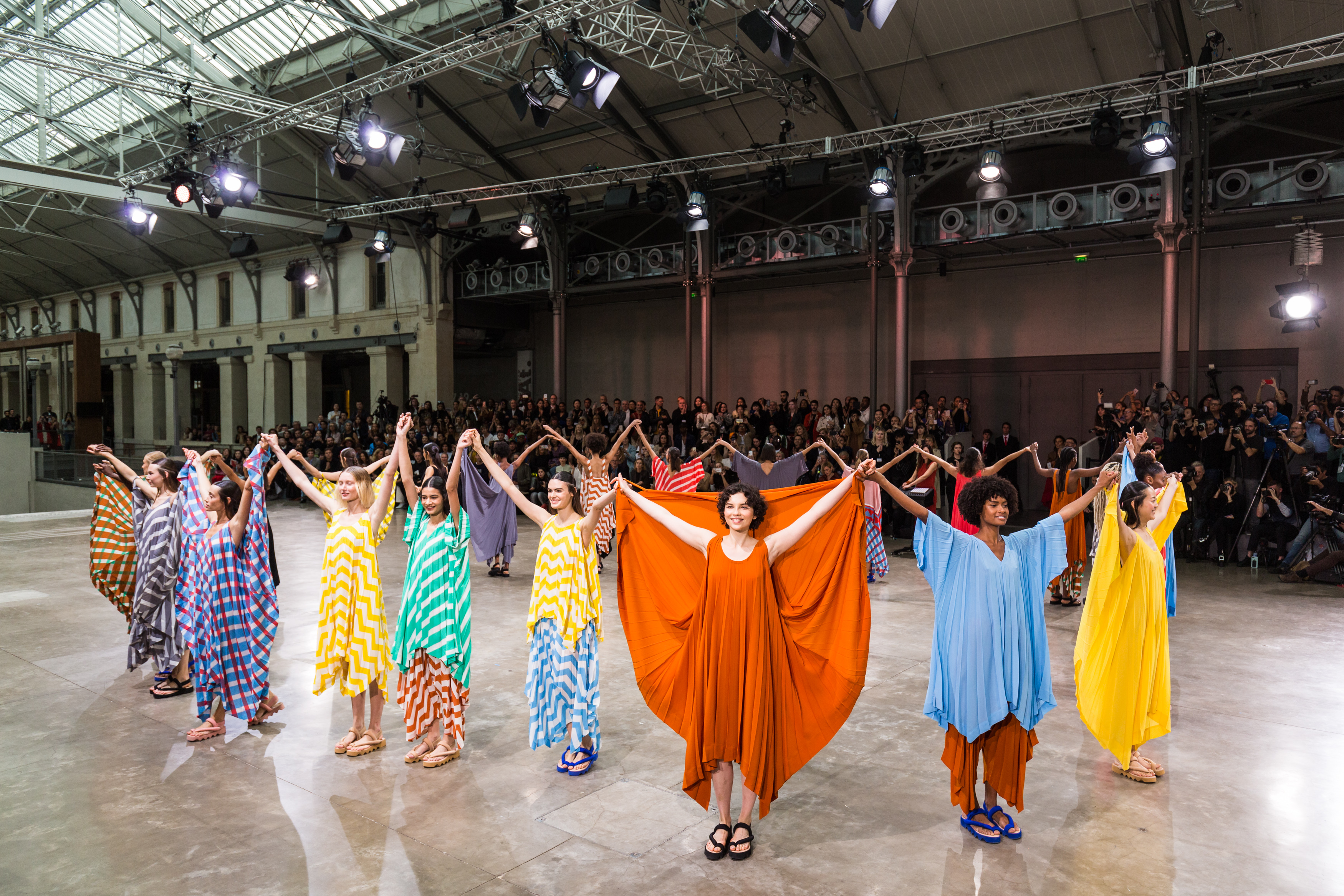 From powerhouse brands such as Dior and Stella McCartney reinterpreting the idea of sustainability in unorthodox ways, and Issey Miyake’s vibrant show celebrating the simple joy of dressing up, to Rahul Mishra‘s ode to growing urbanscapes, and Naomi Campbell closing YSL’s show, Paris Fashion Week SS 20 had plenty moments that made it memorable. While Chanel’s show made headlines owing to a vlogger  joining the final lineup of models (and Gigi Hadid coming to the rescue), John Galliano’s morbid yet fascinating  World War I and II references once again created a buzz. Here are some of the best highlights that you might have missed.

Among her signature slouchy blazers, baggy pants, and statement skirts, Stella McCartney once again cemented her claim of being an industry leader when it comes to exploring different aspects of sustainability. The designer introduced Koba, the world’s first faux-fur made with recycled polyester and plant fibres. This rendition of fur is equally rich and luxurious in texture as its original counterparts and can be recycled, minimising waste.

Want to witness serious fashion through a dramatic frame? You can count on Satoshi Kondo, creative director at Issey Miyake. Besides the striking colour scheme and summer-appropriate silhouettes, it was the music, and models dancing and sailing on skateboards on the stage that stole the show. The highlight was when three circles with stretched fabrics were lowered onto the outstretched arms of the models that then transformed into dresses.

It was once again attention to detail that stood out at Rahul Mishra’s SS 20 showcase. Exploring varied forms of embroideries, Mishra’s focus was ‘shapeshifting’ techniques. His penchant for couture-like finishing even in his ready-to-wear pieces, was evident in his latest show too. Some pieces took over 3400 human hours of hand cutting and embroidering. The line showcasing his expertise with 3D embroideries comprised of skirt suits, floor-length dresses, trenches, and more.

One of the most awaited shows this year was Chanel SS 20, marking Virginie Viard’s first prêt-à-porter collection since the passing of Karl Lagerfeld. Her reinterpretation of the quintessential French girl was infused with a punch of fun and modernity. Denim jackets with short tweed skirts, white coats finished with braids, the signature Chanel tweed jacket reimagined in the form of playsuits, and pleated blouses with balloon sleeves, everything seemed to fit in the quirky and updated Chanel canvas.

Maria Grazia Chiuri knows how to celebrate women, and this time she was inspired by photographs of Catherine Dior, Christian Dior‘s sister who was also an avid gardener. For Chiuri, this led to exploring the theme of gardens and sustainability. She collaborated with the landscaping collective Coloco to create an ‘Inclusive Garden’ comprising of various species that were sourced from nurseries in France, Germany, and Italy. The idea was to make people aware of biodiversity and climate change. Every tree that was part of the show will now be planted in forests by GoodPlanet Foundation, and several other elements recycled. Chiuri packed a punch for summer with her flora-fauna printed taffeta and organza gowns, cocktail dresses featuring signature Dior embroideries, and subdued colour scheme.

Fashion’s enfant terrible once again lived up to his title – John Galliano’s visual narrative is marked by textures, silhouettes, and drama. His latest showcase for Margiela was inspired by references to World War I and II. Heavy coats, military jackets, leather playsuits, thigh-high boots, and classic silhouettes that were deconstructed and experimented defined his collection. However, it was the dramatic and powerful strut of the 20-year-old model Leon Dame that was most Instagrammed.

Dior Issey Miyake Sustainability PFW International Fashion Paris Fashion Week SS20
Anupam Dabral
Sr. Associate Editor
It was while studying fashion journalism at London College of Fashion that Anupam developed a keen interest in the anthropological aspect of the discipline; for him, fashion only makes sense when seen in the context of its environment. He is always on the hunt for great stories, and in his spare time binge-watches films/shows starring Whoopi Goldberg, Dawn French and Jennifer Saunders.
Fashion Jewellery Style