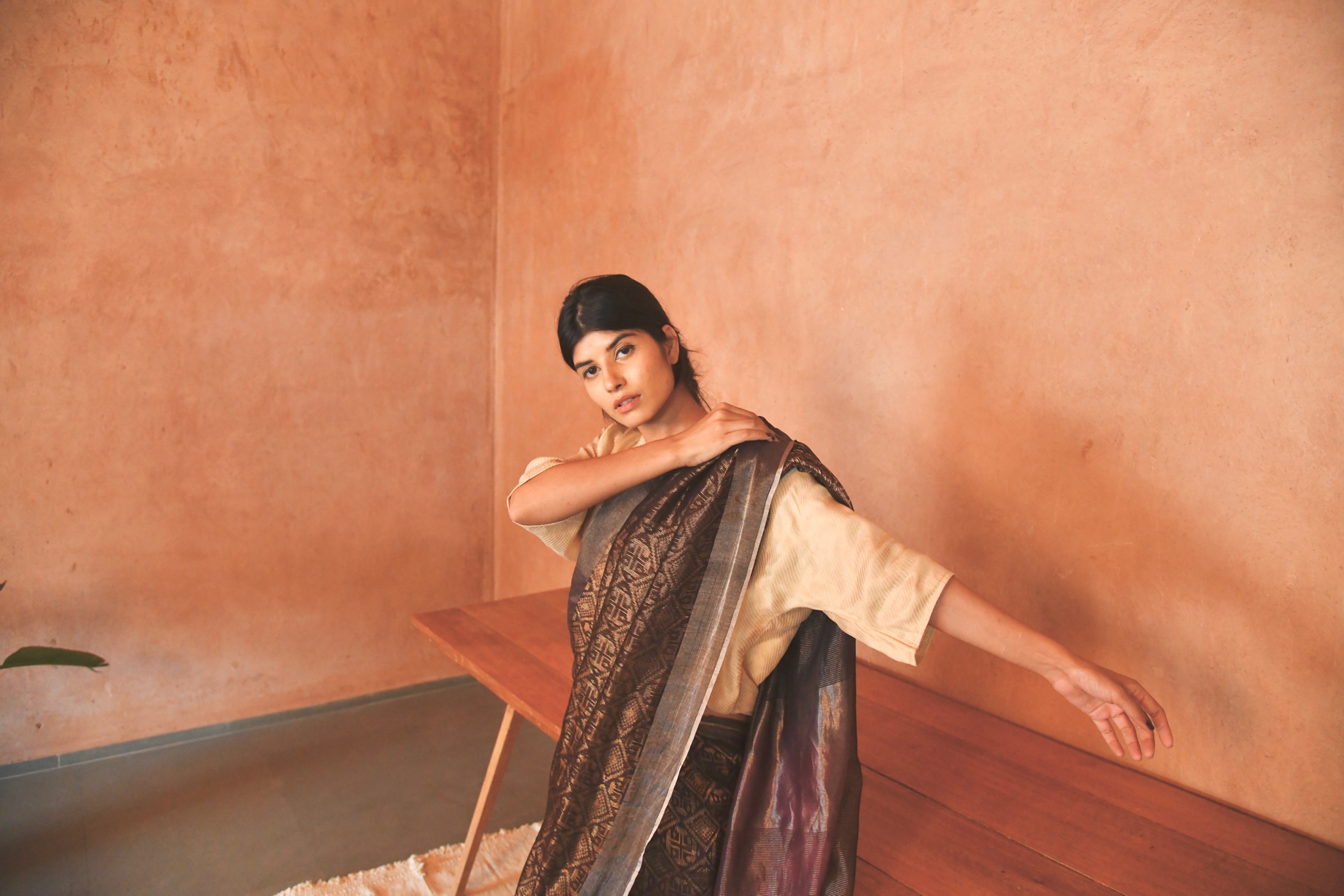 For sari lovers, the traditional Indian handloom spectrum presents an array of options. From rich Kanjeevarams to intricately woven Bengali Balucharis to comfortable Dharwad cotton saris, there is something for everyone. Among these, the elegant Chanderi has its own legion of fans. Traditionally, Chanderis are crisp, soft, and breezy, ideal for every day and occasions alike. But Somya Tambi is giving them a new feel.

Lustrous and luxurious, his Jaipur-based label Meekhalio focuses on diaphanous Chanderis with extra sheen and chatai motifs, on a base of steel greys, rusts, greens, and browns. Tambi has reinvented the traditional ‘Kiramjee’ technique, which allowed a single colour to appear in a warp and weft; his innovations now see seven-nine hues in Chanderi warps. There is also fabric innovation — he mixes soya yarn with silk. Even though Indian saris conjure up a maximalist image, Tambi’s designs speak to a discerning woman. His creations are in subdued tones of charcoal, beige, and creams, juxtaposed with soft pinks and other such all-season colour schemes. Even though Tambi’s rendition of the Chanderi might come across as far more glistening and rich than traditional ones, there is an inherent ease in what he creates.

The age-old traditional design practices adopted by the clusters required updates, and so Tambi has also made innovations keeping the idea of sustainability in mind. His primary focus was on creating homegrown fabrics with lesser environmental impact, which led him to do intensive research on mass-produced fabrics in India. “I wanted to pick up a local yarn and employ local craftsmen,” he says.

The designer found his solution in soya yarn. The isothermal properties of the yarn were perfect for every season, keeping saris cool in summers and warm in winters. The yarn not only had increased tensile strength but also fared well on sustainability parameters. “Though not 100 percent sustainable, it required a lesser amount of chemicals and water when processed. And those chemicals could be reused in other processes. Besides this, the yarn absorbs colour easily,” says Tambi.

An ex-banker and handloom enthusiast, Tambi was always passionate about textiles. Once he decided he wanted to pursue something in this industry, he was determined to think about fabrics beyond colours and motifs, and so his designs keep craft at the core. With this in mind, he started working with Chanderi clusters in Madhya Pradesh from the very start itself (his label was born in 2016). His idea was to make the traditional Chanderi work for modern times without compromising its deep-rooted heritage.

His upcoming plans include the nettle yarn, and Tambi says this label will be plastic-free by the end of 2020. And with every sari sold, the brand will plant a tree. They have started using ash instead of detergents in their workshop kitchens. According to Tambi, sustainability is subjective — it is not limited to processes or products, and can be achieved at any stage from production to packaging. Somya Tambi’s experiments and his understanding of the ground reality paint a candid account. “Complete sustainability is utopia. It is a slow process, and we have to fight one battle at a time,” he says.

Tambi creates made-to-order pieces ranging between Rs 7,500 and Rs 20,000, and retails through exhibits at Dastkar Bazaar in Delhi and Kala Ghoda Arts Festival in Mumbai. To know where he’ll show next, follow his Instagram feed.

Sustainable Fashion Indian Fashion sarees Somya Tambi Meekhalio Chanderi Handlooms
Anupam Dabral
Sr. Associate Editor
It was while studying fashion journalism at London College of Fashion that Anupam developed a keen interest in the anthropological aspect of the discipline; for him, fashion only makes sense when seen in the context of its environment. He is always on the hunt for great stories, and in his spare time binge-watches films/shows starring Whoopi Goldberg, Dawn French and Jennifer Saunders.
Fashion Jewellery Style