“Hermès’ interpretation of time runs counter to industry trends and is supported by models dedicated to a singular function, but also by models with distinctive and non-formalistic designs,” says Philippe Delhotal on the idea behind the maison’s art.

We’ve always admired Hermès’ timepieces for being pieces of art as much as watchmaking novelties. After all, it is only understandable that the French luxury fashion brand’s design sensibilities would percolate down to its timepieces. But over the last decade, Hermès’ watchmaking prowess has steadily grown to establish a distinct identity.

We’ve noticed a signature in many of Hermès creations — brilliantly intricate movements that hide underneath dials that in themselves are like artworks (the Cape Cod and Arceau lines have often been the vehicles for this). This year, the watchmaker hit another high.  At the online Watches & Wonders 2020, a digital fiesta of Haute horology, Hermès debuted a string of watches being touted as some of the best presented this year. There were three new men’s watches — Arceau L’heure de la lune with new dials, Slim d’Hermès GMT in rose gold, and Arceau Skeleton. For women, the Cape Cod took on a new look, and on Nantucket and in the métier d’art, Arceau with exceptional craftsmanship.

At their helm is Philippe Delhotal, artistic director at La Montre Hermès. Having spent time at Vacheron Constantin, Jaeger-LeCoultre, and Patek Philippe, where he’s been responsible for overseeing some of the brand’s finest watchmaking marvels, Delhotal has been building Hermès watchmaking repertoire for the past decade.

We took a deep dive and spoke to Philippe Delhotal to understand the art and craft behind the novelties.

What are the key elements Hermès took inspiration from for their collection this year?

The Hermès Time: Hermès Watchmaker conveys a different approach to time, an approach free of any formalism and unmistakably recreational. We don’t create totems of fashion or cult. We create objects. Objects that artisans’ hands shape to make them true companions for those who wear them. These practical and functional objects stemming from uncompromising expertise radiate all the inherent lightness of the unexpected.

For Hermès, time is also an object. Rather than measuring it, dividing it into sequences and seeking to control it, the Maison dares to explore another time designed to stir emotions, open up interludes, and create spaces for fanciful approaches and recreation. This time it gives birth to watches freed from the bonds of conventions. They are endowed with the name and the high standards of craftsmanship inherent in watches while playing the role of agents provocateurs dedicated to creating a pleasant mood and alleviating the frantic pace of our daily existence.

Tell us about the Arceau L’heure de la Lune – what inspired its design and innovation?

Arceau L’heure de la lune is a good expression of the singular interpretation running counter to industry trends. We presented it last year in a limited edition. This year, we renewed it with versions on a lunar, Martian or Black Sahara meteorite dial. It’s a useful function with a graphic and mysterious side. It’s a traditional complication interpreted in an offbeat way, designed to offer a singular approach to mechanical watchmaking, along with a playful read-off mode based on two moons built into the dial and playing hide-and-seek with satellite-type gravitating sub-dials.

This complication evokes a sense of dreams and emotions. Its read-off is playful, with counters gravitating around the moons and topsy-turvy moons because Hermès loves to dream with its head upside down. On most models with a moon-phase complication, the latter is a subsidiary function visible through apertures and is not expressed as a priority dial read-off. With the Hermès moon phase, we express a loss of temporal and spatial bearings, an ‘upside-down’ environment, a voyage through the cosmos. Stars, metal, and rock conjure up images running counter to the acceleration of the world around us. This watch hints at the existence of another space-time, a deeper interlude.

The Arceau Squelette is another standout piece this year – can you elaborate a little bit about the innovation in it?

The Arceau Skeleton expresses a right balance between elegance and mystery and goes a step further than pure equestrian codes. The enigmatic Arceau watch confines itself to essential: The mysteries of an elegance imbued with understated lightness. Its skeleton heart appears beneath a smoked crystal, punctuated by openwork numerals that evoke a galloping horse. Between shadow and light, the Arceau Skeleton is a new interpretation of the Hermès time, subtly revealing the complexity of mechanical architecture.

The Cape Cod Martelée revived the age-old method where the case material is hammered to create its finish. How did a treatment so distinct find its place in this year’s collection?

This year, Cape Cod introduces again a bold and innovative new creation with a matt hammered finish, borrowed from the world of jewellery. It adorns the steel case as well as the gradient lacquered dial, ranging from black to anthracite. Cape Cod is perpetually transformed and lays itself open to all kinds of whimsical interpretations. 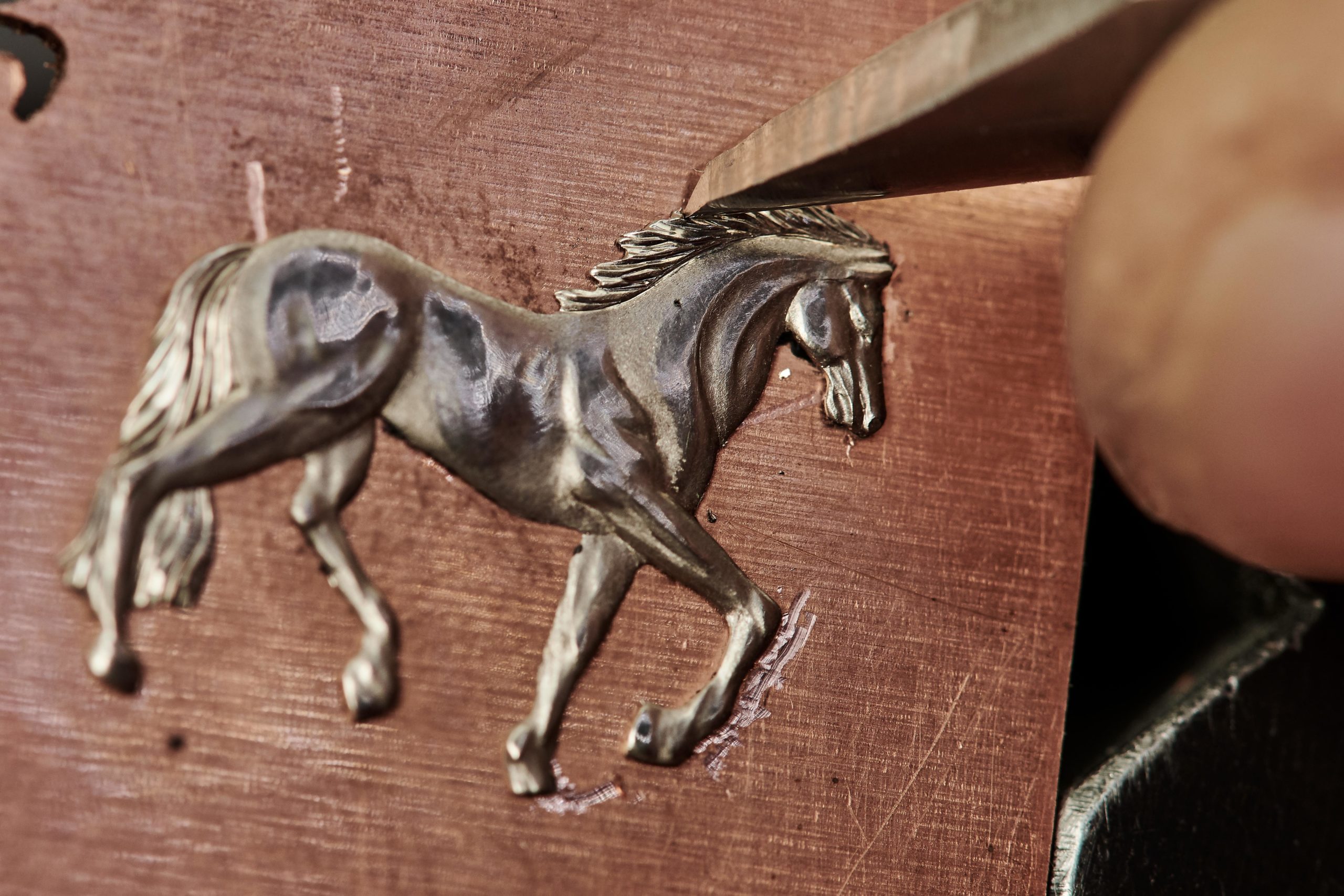 What inspires your final decisions on design, and what are the principles you adhere to when it comes to Hermès’ design, movement, and finishes for its watches?

When designing, I’m constantly thinking about what our clients are expecting from us — it’s about asserting oneself as a man or woman free of temporal constraints, relaxed, and occasionally whimsical. It is about making light of time rather than seeking to dominate it. It is an invitation to experience a singular relationship with time, a time with which one plays, yet without ever hoping to control it.

Hermès’ watchmaking approach melds its legacy, a sense of whimsy, and of course, design – does it get overwhelming to balance these?

While every R&D-department in this industry is engaged in a perpetual quest for innovation, precision, and numerous functions serving to better master time, Hermès’ watchmaking offers a different interpretation of time: A time full of fanciful touches, which goes well beyond style. The Maison does not seek to replicate what already exists but to be audacious.

Hermès is striving to harmonise mechanical complexity with high design, and every year ups the ante on innovation. How is the brand looking to build on this further?

In recent years, we have seen growing interest from Hermès customers, and watch collectors, thanks to launches featuring singular designs and unconventional interpretations of traditional watchmaking. In 2015, for example, there was Slim d’Hermès, born from a stylistic exercise around the purity of design, and expressing a move towards essentials with a minimalist style; in 2018 it was Carré H, a square-shaped watch designed by Marc Berthier featuring a contemporary aesthetic etc.

We are enthusiastic to see the growth of collectors’ interest for our watches which are proofs that the expression of the Hermès time pleases them. Watchmaking represents a ‘client recruitment’ metier for the Maison, through objects imbued with Hermès values, whether equipped with exceptional technical watchmaking elements or expressing singular creativity unrestrained by conventions.

How are you reaching out to your consumers in the times of coronavirus?

We are, of course, adapting to the situation by ensuring that our launches convey the right messages and are understood in the world, which has become digital over the last months. And by supporting the retail in markets that have re-opened or are about to re-open, the second semester will be rich, especially for our women customers highlighting creativity and singularity in our objects.

What do you predict for the future of the watch industry in 2020?

I can’t speak for the future of the watch industry, but I can tell you where we see Hermès watchmakers. These recent years have confirmed that Hermès is legitimate in making watches, bringing its creativity and craftmanship with full credibility. We will keep developing watches that capture the full Hermès essence and alternative ways of displaying the time. Our ambition is to remain an important and well-respected player in the Swiss watch industry while respecting the values of the House. We will never stop surprising our customers with innovative products.