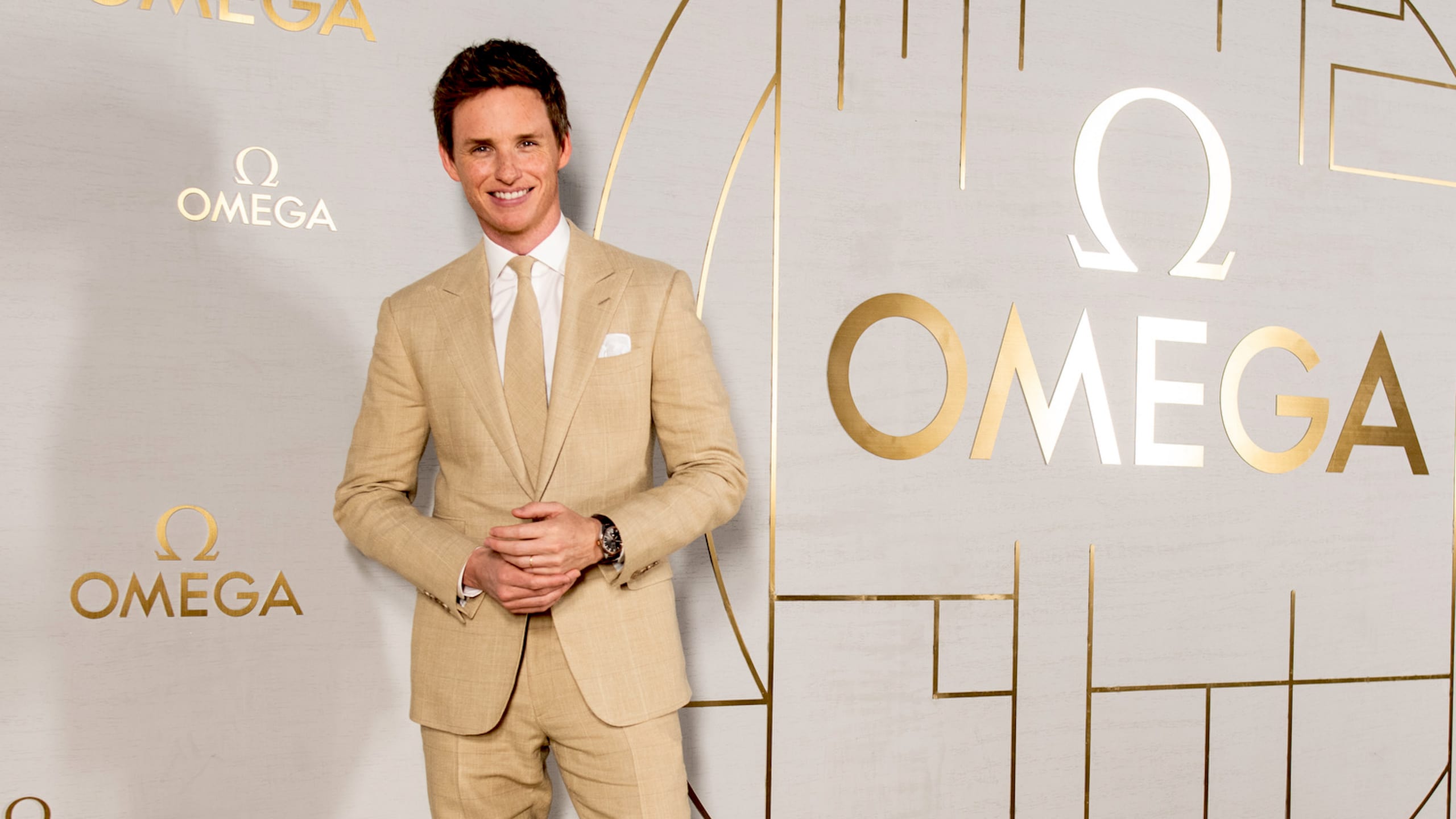 Eddie Redmayne on ‘The Aeronauts’ and his favourite OMEGA moment

Despite 14 hours of travel and a back-to-back shooting schedule, Eddie Redmayne doesn’t seem jet lagged. Far from it, in fact. “I’ve just spent the morning at a Zen tea garden”, says the 37-year old Oscar winner, a picture of boyish charisma as he addresses droves of interviewers assembled at The Peninsula Shanghai. The Fantastic Beasts star is in town to open Planet OMEGA: the watchmaker’s flagship heritage exhibition, slated to begin its globetrotting tour in China later this June. Featuring a plethora of watches and artefacts (some over 100 years old) that are essential to the brand’s heritage, it represents the most comprehensive version of the OMEGA story — save perhaps for the brand’s museum in Bienne — ever to be told under one roof.

Though Redmayne has been an OMEGA ambassador since 2015, the award-winning thespian (who has been working steadily in film & stage for over a decade) actually has a long-standing relationship with the brand, going back to his teenage years. “My father owned an incredibly beautiful De Ville that I used to ‘borrow’ when I was younger”, Redmayne says. “So when I graduated to serious watches, OMEGA was always the obvious choice.”

Beyond the subject of horology, Redmayne is keen to discuss his latest project — an Amazon-backed biopic about the British meteorologist James Glaisher. The film, centring on a balloonist’s perilous journey to 10,000 metres above sea level — in the days when fixed-wing aviation was an absurd joke — is a good fit for the OMEGA alum, who has pitched a career out of playing humble, unpretentious, yet quietly resourceful individuals. Just hours before his headlining appearance at Planet OMEGA, we caught up with Redmayne to discuss acting at altitude, his favourite moments “on set” with the brand and why he prefers tailoring that fits like a second skin.

As you know, OMEGA uses their history to reinterpret their timepieces. If you could choose one historical figure to play in a film, who would it be?

The film that I’ve just wrapped on — coming out later in the year, called The Aeronauts — enabled me to play a guy called James Glacier. He was one of the first people to reach the upper atmosphere via hot air balloon. When I was preparing for it, I realised his father had actually been a watchmaker, and in that moment the knowledge I gleaned from my time with OMEGA enabled me to become the consummate method actor [laughs].

If we look at it from the perspective of era, I’d be very interested in playing an individual from the 1920s. I’ve already done that a bit with Fantastic Beasts but the atmosphere of the Roaring Twenties — in large part because of the fashion and energy — makes it a period whose historical figures I’d be really interested in revisiting.

You’ve been a brand ambassador for OMEGA since 2015. It’s fair to say you’ve made an extensive number of films since then. In that time, what’s your favourite “on-set” OMEGA moment been?

Within the wider context of commercial shooting — not just films — one of my most enjoyable experiences was actually the Seamaster Aqua Terra campaign, which we shot on location in Ibiza. I remember OMEGA asking me to front it and thinking “Really? I’m the worst sailor in the world bar none. I’m just not sure my seafaring skills are that great”! But it ended up being the most amazing experience: I was taught how to sail a yacht for 24 hours and then immediately the next day we were out on the ocean, shooting on this gigantic boat, helicopters whirling above, and the video came out and made me look like the most competent sailor in the world. So that was incredibly special.

The other most memorable time, I suppose, was when I was at the Rio Olympics and was being introduced to the timekeeper technology, which OMEGA has had a pivotal role in producing. My conception of timing at the Olympics had always been very old school: you press “start’ and then you press “finish”. But seeing the intricacy, precision and the dedication required to time was really just overwhelming. We’re still two years away from the Tokyo Olympics yet the timekeepers are already there setting up and working it all out!

In terms of your acting career, what’s the most important milestone for you professionally?

The official answer is probably when I was fortunate enough to win an Oscar for Theory of Everything — that felt like an incredible thing. But weirdly, I often think about the first play that I ever did, about Mark Rothko. It started here in London and eventually moved to New York. On Broadway it began as a very small play (with Alfred Molina) and kind of grew and grew to become this major thing. Obviously I love acting, but that particular play was also about the art world — which is what I’d studied at university — and that conflation of things which I was passionate about was pretty special.

Say you had a time machine: would you choose to go back to the past or into the future?

Is it wrong to say definitely the past [laughs]? I mean, I’d nip to the future out of curiosity but go back to the past for security. The last 100 years seemed like such a period of upheaval and change and I think that, as a generation, we’re only now realising how lucky we’ve been the last 30 years. Weirdly, and I don’t mean to romanticise, the 1920s would be the period to look into: I don’t know that it’d be as fun as it seems — everybody wearing cool gear, doing cool dances and drinking lots of champagne — but definitely very interesting.

Name one guilty pleasure you have that makes people go, “Oh my God, he does that?”

You’d need to ask my wife this question — I’m sure she’d come up with a list. I definitely have the capacity to be impatient and somewhat of a control freak, but the real thing is constant anxiety.

Since you became an ambassador for OMEGA, what do you look for in watches?

The thing I love about OMEGA watches — and I suppose it seems absurd to relate it to acting — is how they have such a formidable history. The brand has such extraordinary stories, all of which they mine to great effect: The watchmakers in Bienne are all very much steeped in their own narrative. But [the brand] doesn’t just linger there — they take their past and they push it into the future. So you have all the classical elements of a watch but you also have them advancing technology — the Master Chronometer certification for instance. And as actors, we try to do something similar: We go and immerse ourselves in the world of [a character]. Though, there does come a point when you have to let it all go to create something new.

You experienced exciting aerial views during the filming of 'The Aeronauts'. In the course of shooting, did you discover any new angles or insights regarding how to appreciate Earth? It feels incredibly surreal: You’re essentially in a little fire basket, and then suddenly you’re in the air. But because you drift up, it doesn’t feel scary, although you’re at the will of the elements. You can’t guide where the balloon is going — all you can do is go higher by throwing more sand out. And so that idea of having to surrender to something was pretty extraordinary. Also, there’s a weird quietness when you descend for the first time. You pull a rope which lets out some of the balloon’s gas, but you can’t be exactly sure where you’re going to land. I remember as we were coming down, we cascaded into a set of trees and I went from being totally at peace to experiencing the most terrifying two and a half seconds of my life! There was quite a bit of sensory overload during the making of that film.

If you could pick any vintage or historic OMEGA timepiece you wanted, which would it be?

Interestingly, for the 125th anniversary of OMEGA I was able to hold a pocketwatch from 125 years ago. So I’d probably go back to something quite old school. I don’t know that I could pull it off in everyday life, but I think pocket watches are just such beautiful objects. But as far as romance goes, it’s my dad’s De Ville which I love. Something about the thinness makes it so discreet and elegant.

What is the importance of a watch to a British gentleman such as yourself?

Have you bought any watches for your wife from OMEGA?

Yes! In fact, she has a very beautiful men’s Globemaster: she likes the sort of chunkier watches which can be worn as jewellery. What’s great about that particular model is that she wears it as a kind of big bangle [laughs].

Have you made any recent discoveries about OMEGA as a brand that were particularly interesting?

As someone who’s pretty technically ignorant, when I was talked through the Master Chronometer tests — and the idea that we now live in a world where there are so many things in our pockets creating magnetic fields — I found that to be pretty extraordinary.

As someone known for their incredible red carpet style, can you share your tips for mixing and matching at awards ceremonies and other formal events?

Firstly, it’s all about picking something that you feel comfortable in, because red carpet events never stop being surreal. It’s fundamentally weird to stand in front of a bank of people and pose — it’s just odd. And it can feel quite intimidating, photographers shout at you and everyone is trying to get your attention, so it’s important to feel comfortable. Who’s your favourite style icon of all time?

Weirdly, my dad. He’s just pretty elegant — and seems to do it effortlessly. He still works in the city, and will always be dressed in a very classic suit but with some flamboyant handkerchief!