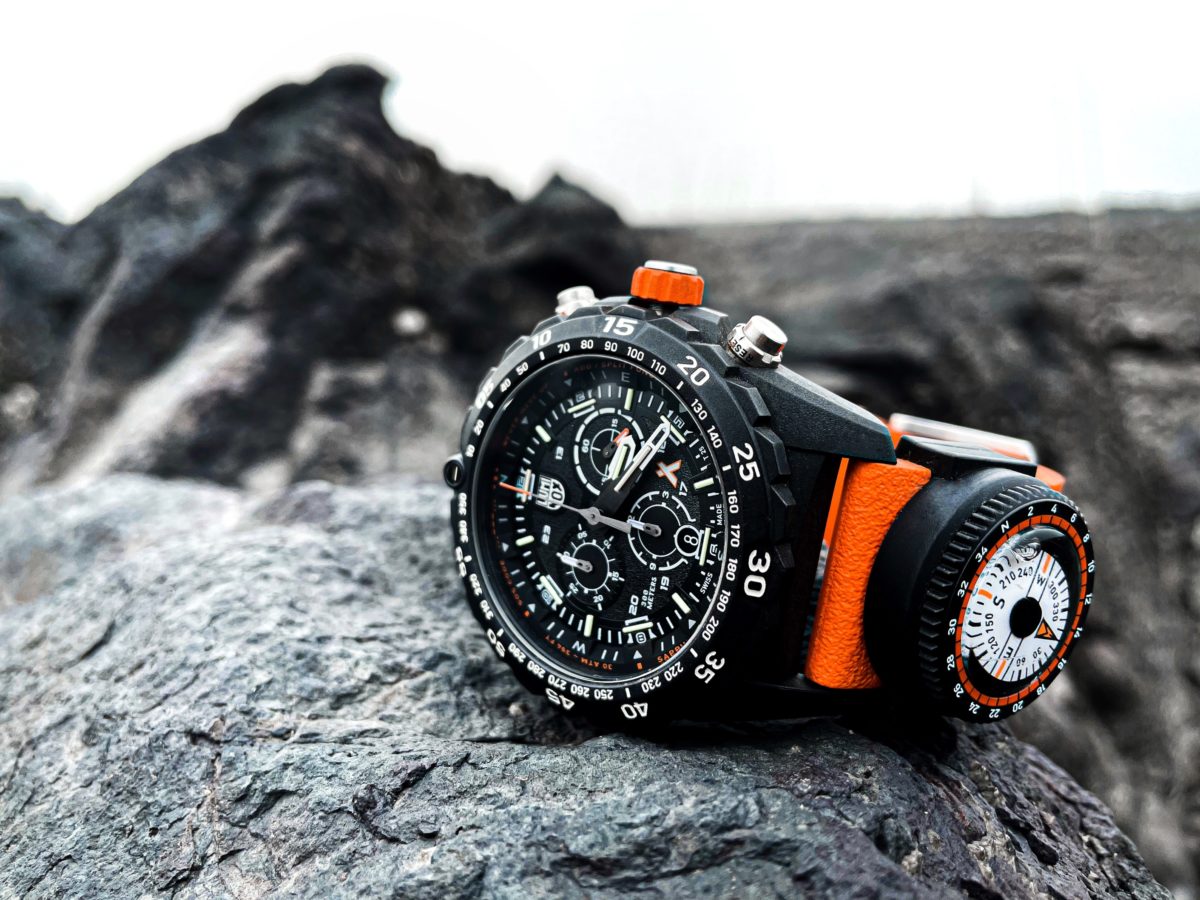 We got our hands on the Luminox Bear Grylls Survival Master 3749. Coming with a seal of approval from Bear Grylls himself, we put this tool watch to the test.

We’ve seen plenty of ‘tool watches’ in our time. Timepieces trying to double up as utility kits or navigational apparatus on our wrists, built for the wild and the rugged. But rarely do we see one with a seal of approval of a survivalist himself. Luminox has a strong reputation of crafting heavy-duty tool watches that are well, tough, in every sense of the word. Built for the extremes of life, they’ve also been supplying the armed forces with tactical wrist-wear, so you know they mean serious business. On the other hand, we have a man who’s endured the harshest sides of nature. Bear Grylls has beat them all – desert, snow, and jungle. A true outdoorsman and master of the survival arts. The two recently united over a brutish Luminox Bear Grylls Survival line, comprising of three capsules – Sea, Land,and Master. 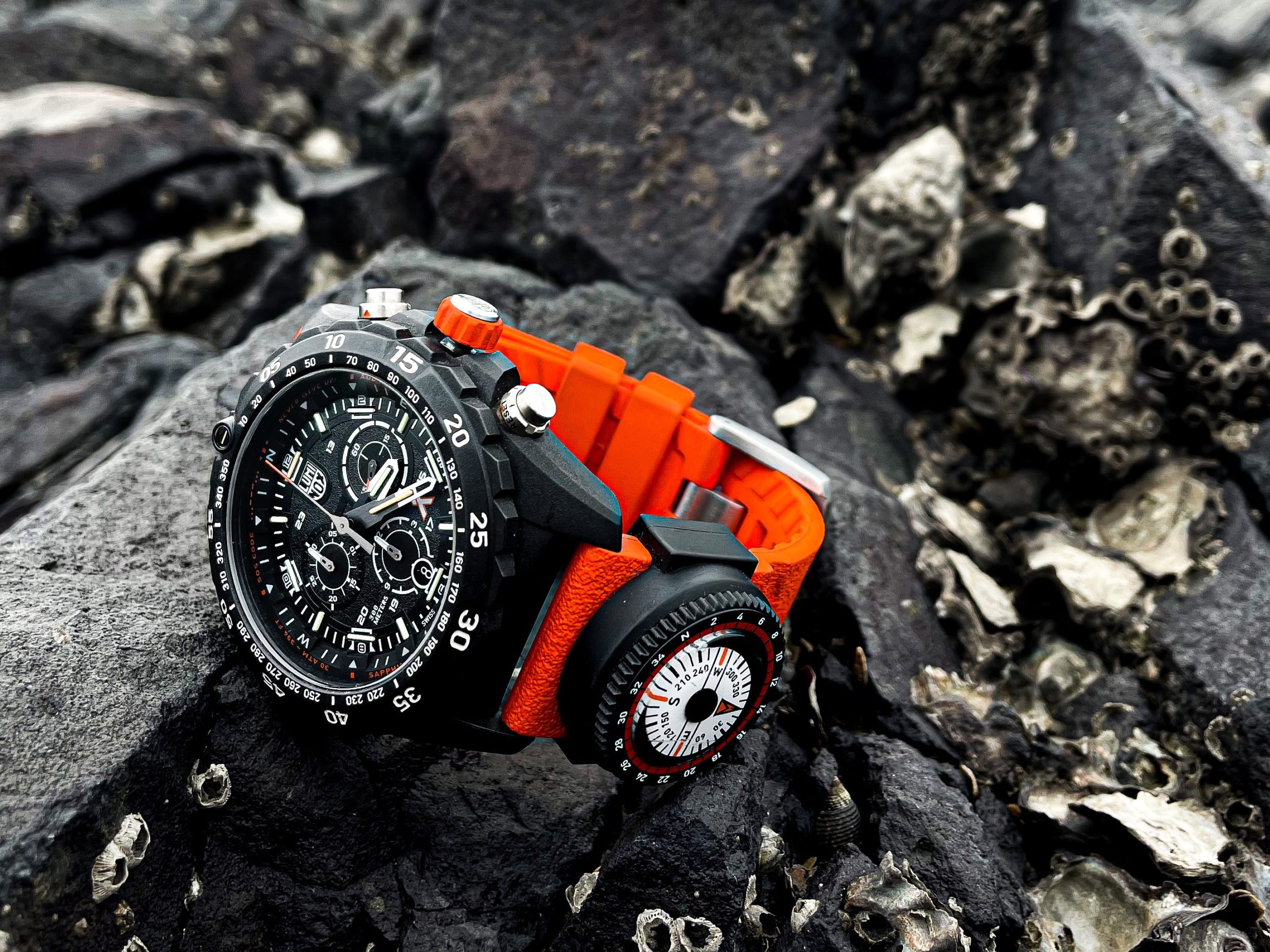 The Luminox Bear Grylls Survival Master 3749 is the one we got our hands on. At first impression itself, the 3749 makes wants you to put your boots and gloves on, embark on an adventure and get dirty. It’s a 45-mm heavy-duty blend of survival features and resilient watchmaking, something really prominent here. The colour of this watch is striking, a monochromatic case and dial with an loud florescent orange strap.

While most watches today, including tool watches strive to be lighter, the Luminox Bear Grylls Master doesn’t. It isn’t heavy per se, but there’s prominent weight that’s felt when worn. One of the many details of the watch that gets my attention is the case — it’s made out of CARBONOX, an in-house carbo-mix Luminox has been using since 2006. Simply put, it promises strength and ease of use, which is the core for any and all survival and adventure gear. I think it’s this very material that separates it from the rest, it doesn’t let it look or feel like most sports-utility watches in the market today. While it might be lightweight, it’s almost indestructible. It also certainly doesn’t feel like it’s made out of resin at all, which is why it gains my favour. 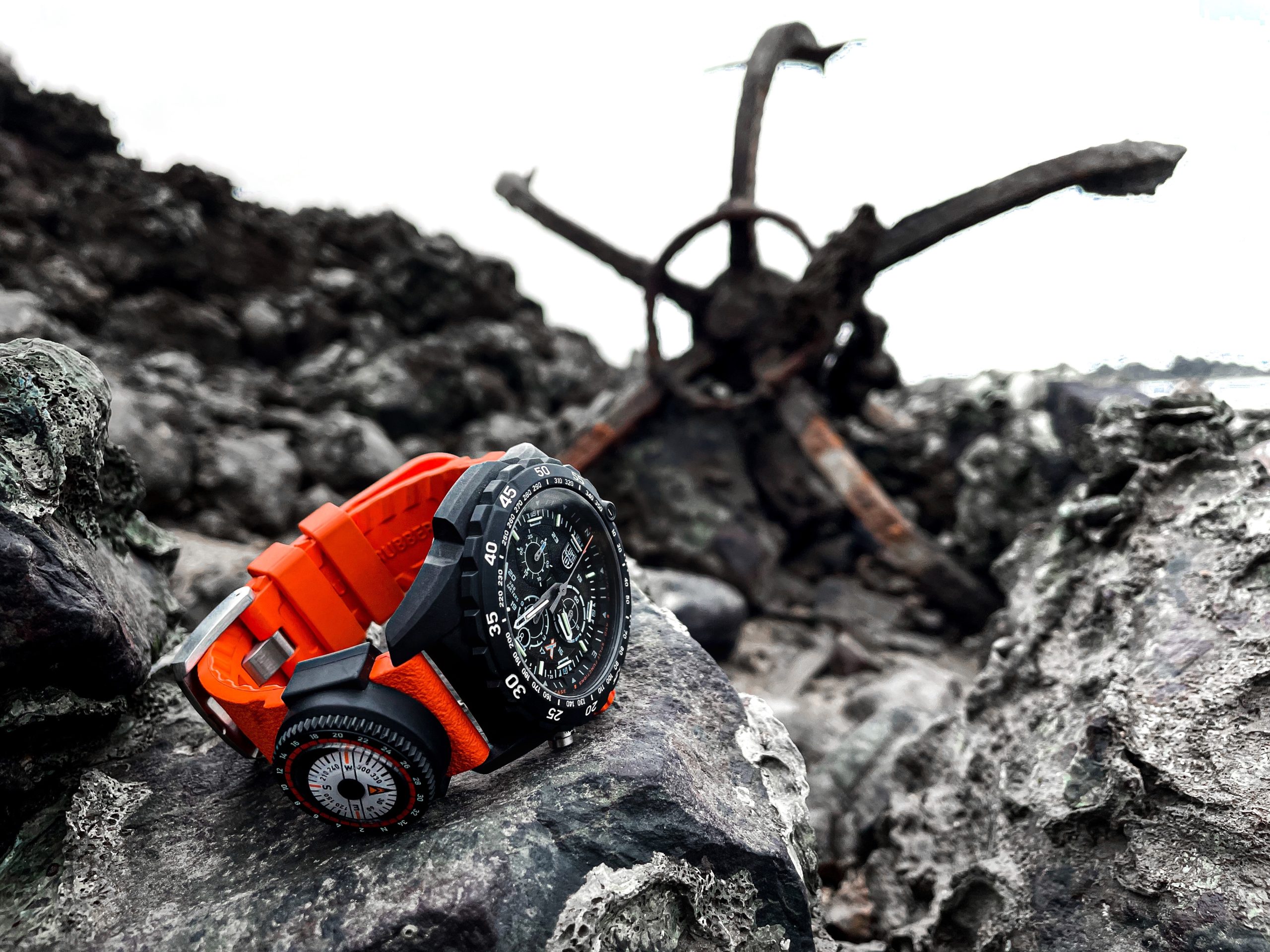 The strap is well, vibrant. It’s a real burst of orange and is complemented by some sturdy rubber. Mind you, this isn’t silicon — it’s rubber and it’s really thick. I think this also contributes to that punch of ‘toughness’ you’d expect from a survival watch. Another cool plus point. 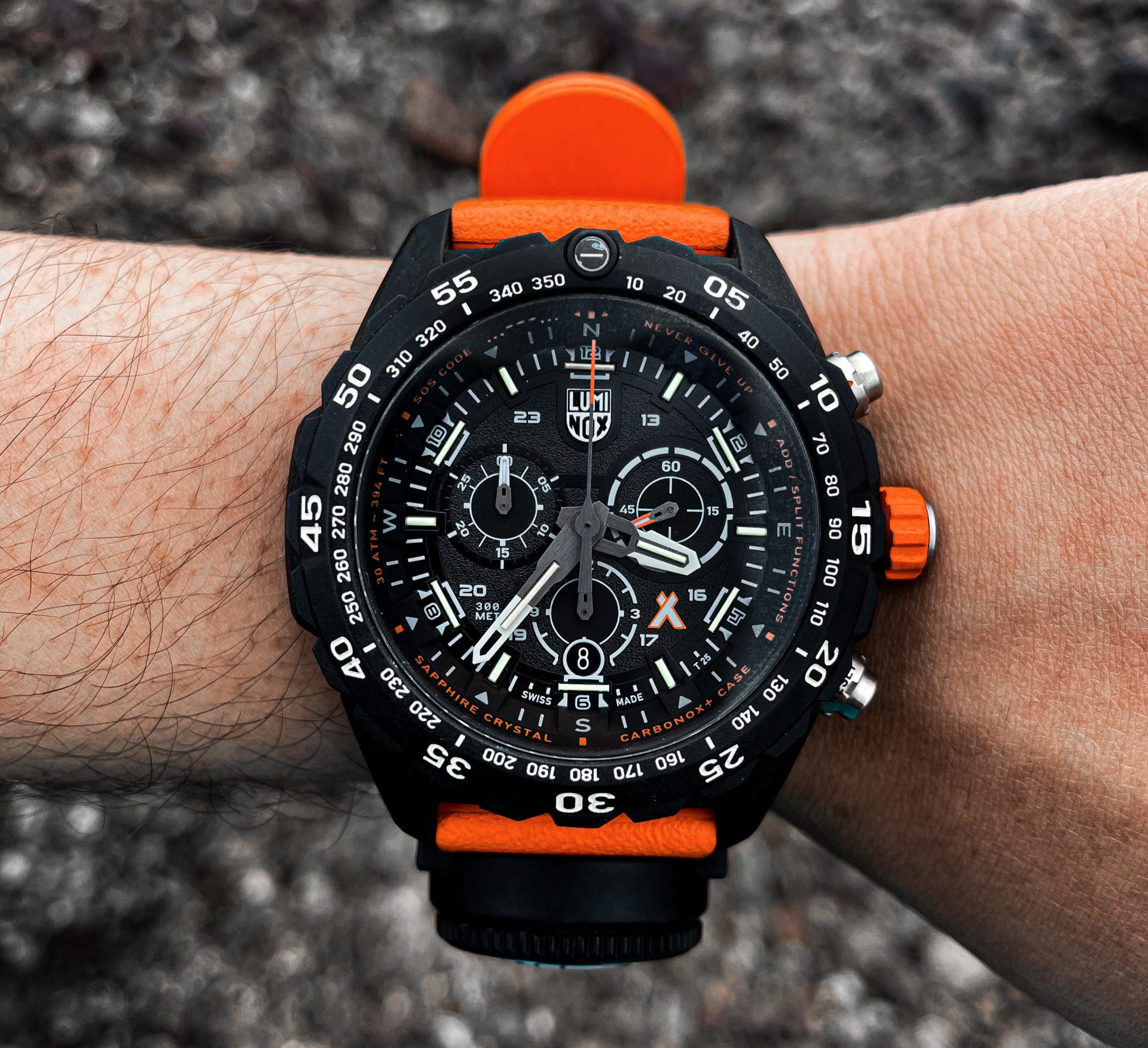 Moving on to the main attraction, the dial. At first impression itself you can tell that it’s quite busy. It boasts a monochromatic aesthetic with a black date and white indicators. The hands, you’ll see upon close inspection, have a brushed metal look with only the tips being dipped in white paint, I guess for better reading. The seconds hand has actually been moved to a sub-dial at three o’clock while its original spot is occupied by the chronograph. The sub-dials at six and nine o’clock are to display the chronograph’s hours and minutes respectively. There’s also a date window at the bottom of the dial. Every alternate hour marker is luminated at night, including the hands and the pip on the bezel. Oh yes, the bezel, carved out of CARBONOX as well, is unidirectional. 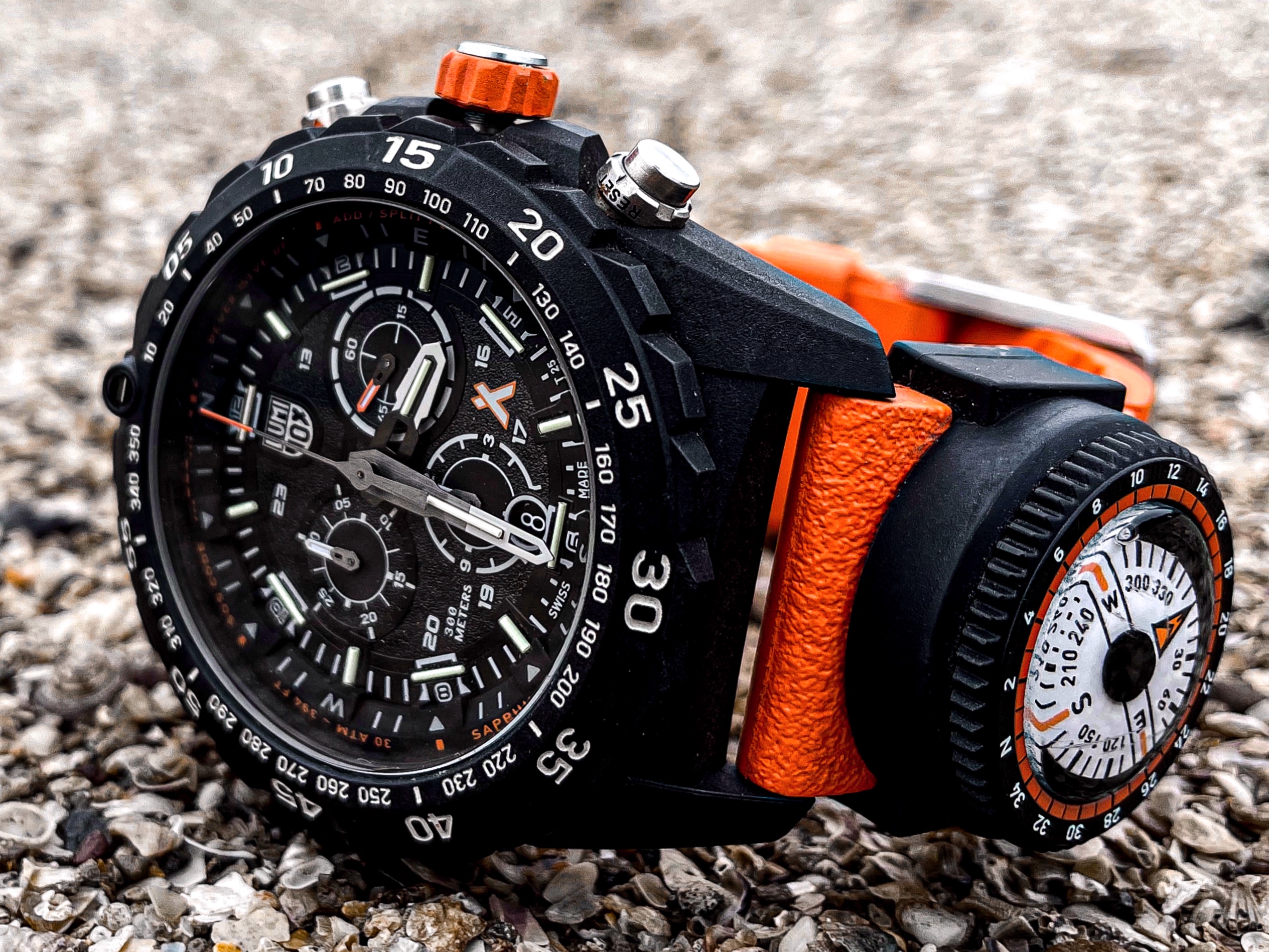 Something that we don’t see everyday is a compass on a watch. I think feature garnered the appeal right around World War II and it’s certainly another cool feature to add it to the mix. Personally, I think it disrupts the brutish aesthetic of the watch and in case you feel the same, you do have the option of sliding it off (though don’t forget how great this feature is if you’re out in the wild). Under the hood, rests a Swiss made, RONDA 5030.D quartz movement, which has one impressive feat. I’ve noticed that most quartz movements usually aren’t perfectly aligned with the indicators, they’re usually a bit off. However, this one is minute precise. That’s another plus point about the Luminox Bear Grylls Master Series. As you flip the watch over, you see a stainless steel caseback with the collection’s slogan ‘Never Give Up’ engraved alongside Bear Grylls’ signature. The watch is 45-mm wide and 14-mm thick. Yes, it’s really big on the wrist, but then it’s been designed to suit a particular silhouette. My wrist being on the this side, I’d expected this watch to appear severely oversized. Surprisingly it didn’t. The compass bulges out but the case doesn’t, thanks to the curved lugs. So incase you’re worried about it appearing bulky, you don’t need to. 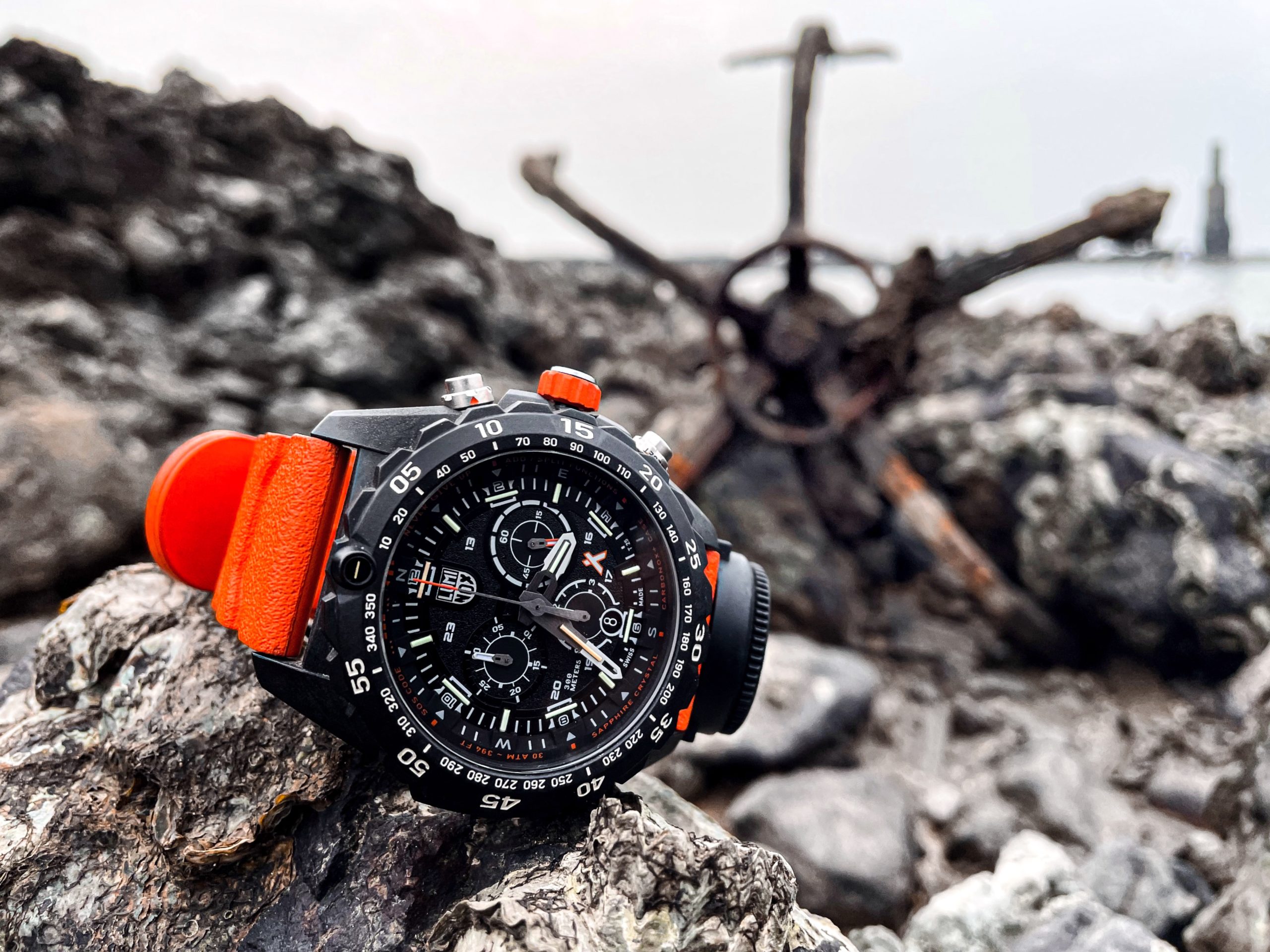 I think Luminox and Bear Grylls uniting over a survival watch is a match made in heaven. While Luminox strives to craft pieces that are tough, resilient, and efficient, Bear Grylls is the human embodiment of that very ethos. He stated he expects just one thing from a watch when he’s away and in the wild — for it to stay strong and intact, no matter what. Considering Luminox’s reputation for crafting indestructible wristwear and being an official supplier to the US armed forces and many more special divisions, the Bear Grylls Master Series is certainly up to par with that. What I like best about the watch is the materials that have gone into the mix — they give it that oomph factor. It’s a heavy-duty accessory, built for those who want to make a statement.

As a survival or tool watch, I think Luminox has included the right features here. Though the compass was a little off-putting for me, but as an exploration tool, I can see the appeal. The Master Series 3749 isn’t for everyone, it’s been designed for a purpose, and therefore not meant for casual indulgences or for those with a general sporty taste for watches. However, for someone looking to invest in a solid piece of wristwear for adventures in the wild or tough terrains, this watch certainly hits the mark.

The Luminox Bear Grylls Survival Master 3749 will be available at select Luminox boutiques and Helios stores. Price available upon request.

Take a look at Hardik Pandya’s arsenal of luxury timepieces