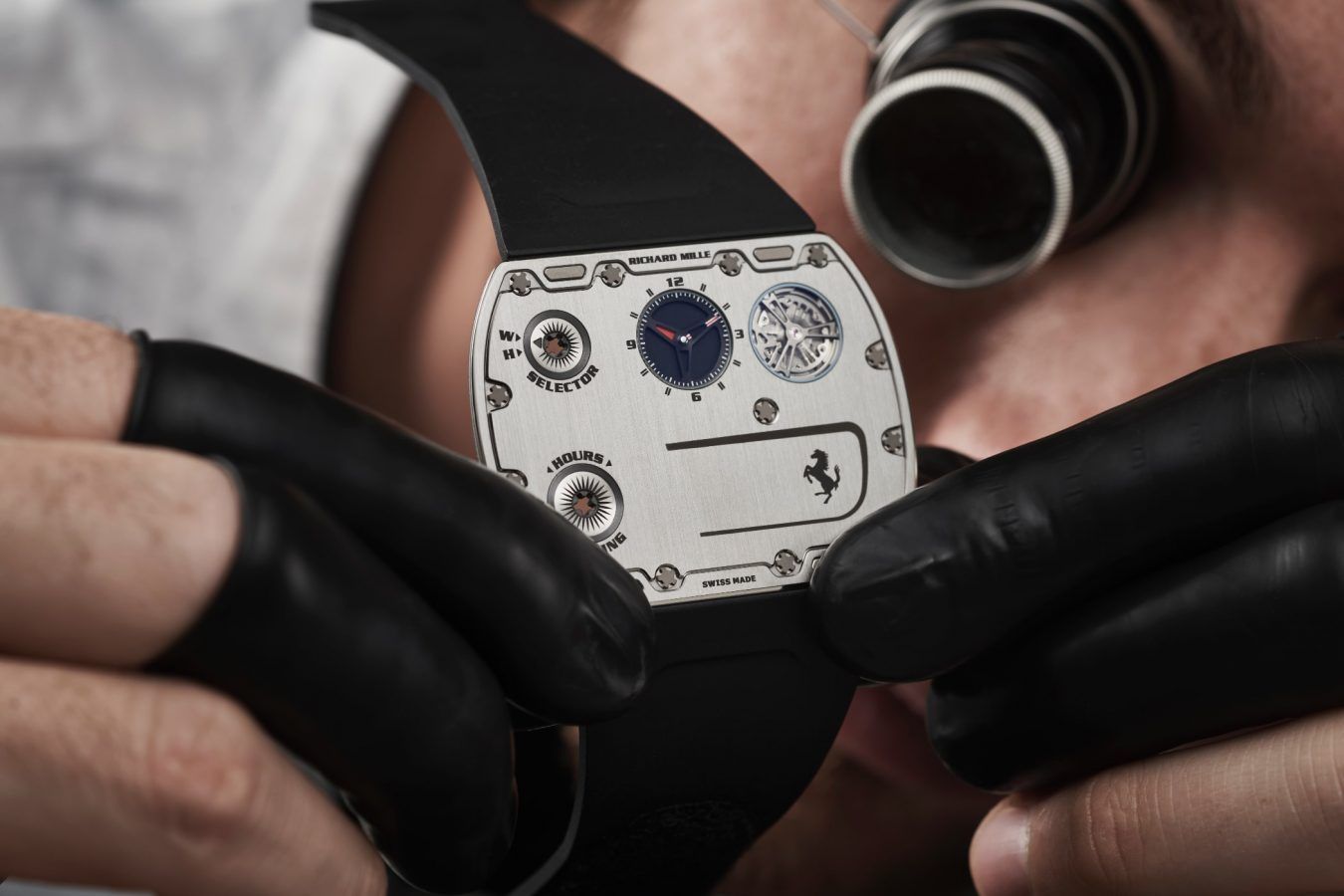 How Richard Mille created the RM UP-01 Ferrari: The world’s thinnest watch

Richard Mille debuts the RM UP-01 Ferrari, measuring 1.75-mm in thickness and becoming the world’s thinnest watch. Here’s how it was constructed.

Just a few months ago, Italian Haute horlogerie titan, Bvlgari set another record in ultra-micro-engineering with the Octo Finnissimo Ultra, measuring in at a mere 1.80 millimetres. It made us wonder – How slim can calibre this complex get? Bvlgari has held this title for years now, consistently upping the ante, year after year, with new Finnisssimos bearing fancier complications. But well, looks like there’s a new champ in town and it’s Richard Mille and Ferrari. Meet the Richard Mille RM UP-01 Ferrari, a samurai sword-thin horological marvel, that slates in at 1.75 millimetres in thickness, giving it a mere 0.50-millimetre edge over the Italians. 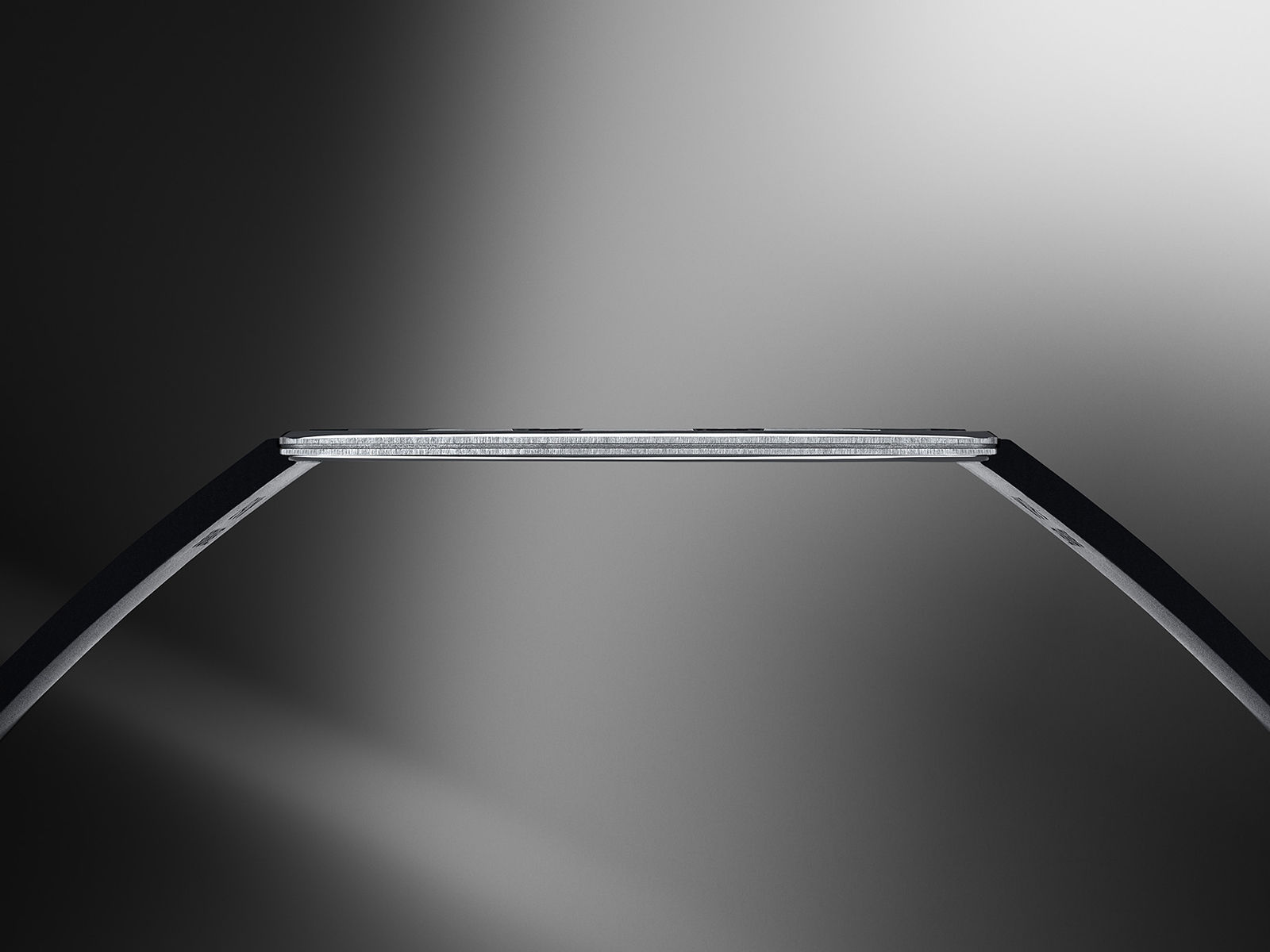 However, unlike Bvlgari and Piaget, who formerly held the title of creating the world’s thinnest watch, the RM UP-01 Ferrari boasts a completely new architectural blueprint for its dial and movement. Considering the extremely-limited dimensions, watchmakers typically used the case back as the baseplate for the movement. However, Richard Mille had other ideas, they spread out the hours, minutes, seconds, and a few fancy mechanicals all across the board. 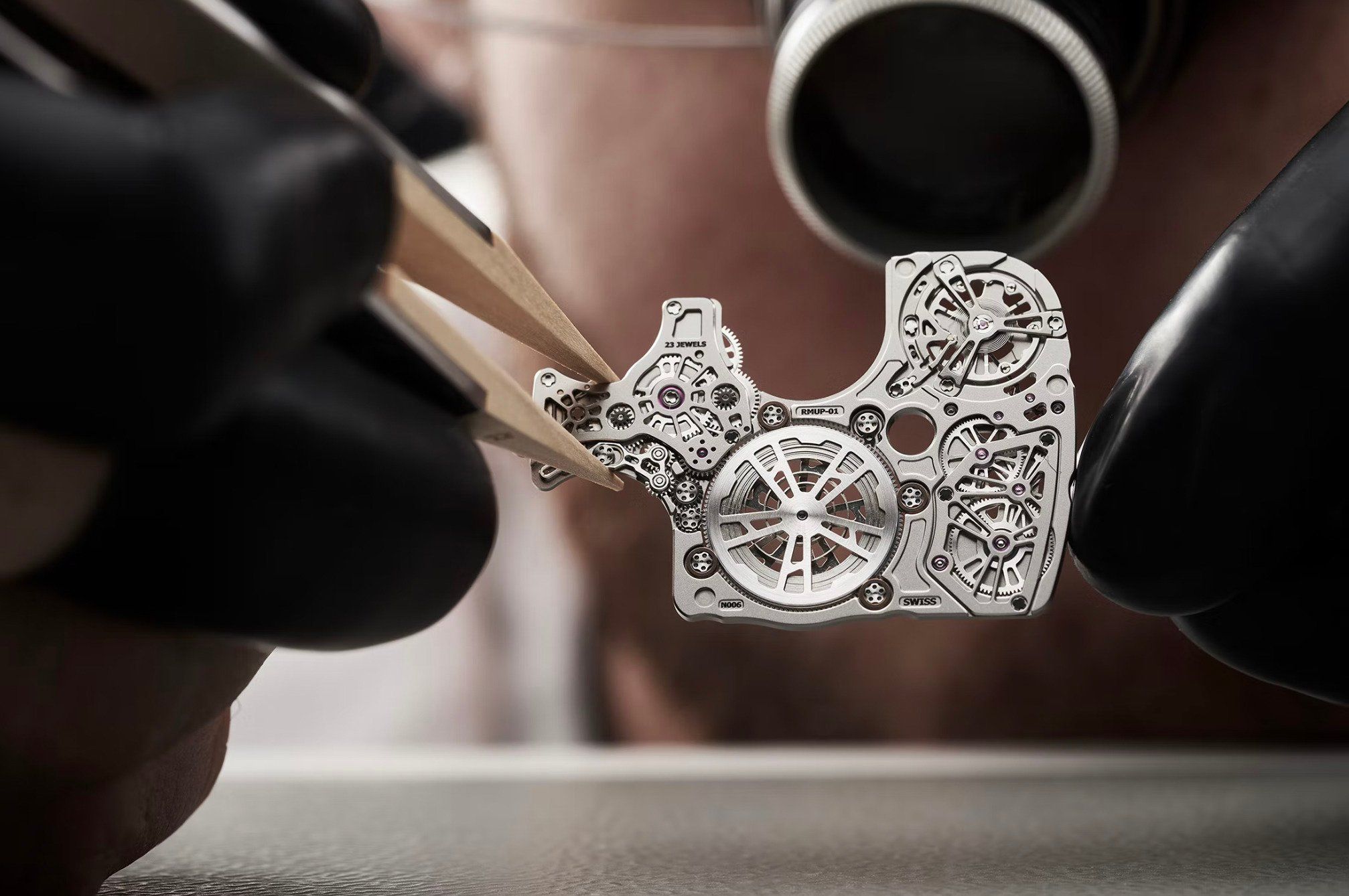 The trick was simple – For the movement, RM teamed up with Audemars Piguet Renaud & Papi to completely rethink how the mechanism and escapement. After vicious hours of R&D, they pieced a titanium variable inertia balance wheel which allowed the movement to reach such minimal dimensions yet retain functionality. Also, the crown, which is used to wind and adjust the time, which of course, the RM UP-01 Ferrari doesn’t have a conventional one, in fact, it has two. Surrounding both crowns are two black ceramic inserts that protect the bezel from friction and also aid in water resistance. And yes, it comes with a 10M water resistance. 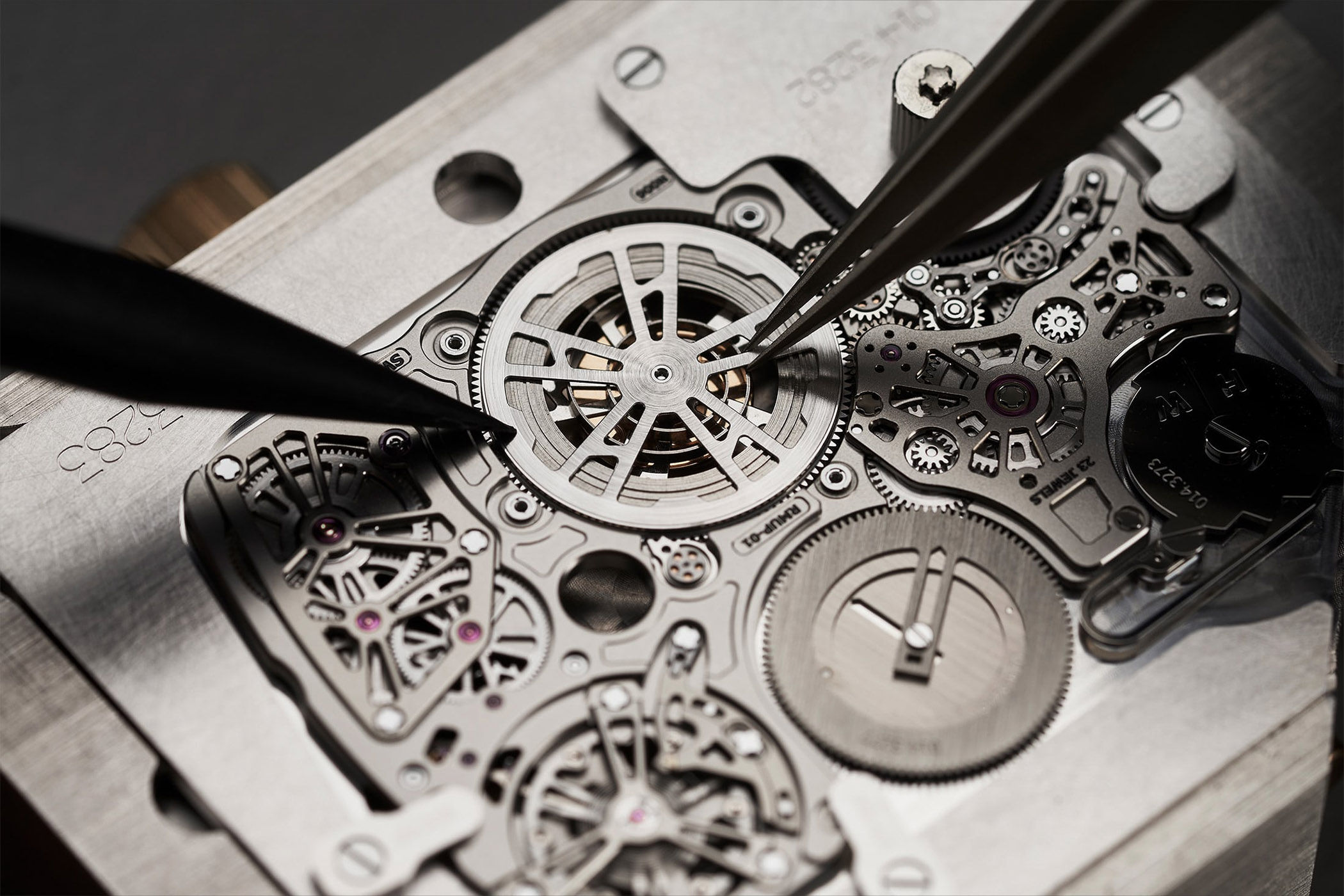 We wouldn’t expect the watch designed for record-breaking to actually be functional. However, considering Richard Mille’s penchant of crafting timepieces that can effortlessly handle extreme pressures like their brand ambassador, Nadal, slicing his 135-mile/hour first serves wearing a Richard Mille tourbillon on his wrist. But well, the ultra-slim calibre RMUP-01 Ferrari features a movement plate tested to withstand accelerations of over 5,000 Gs. 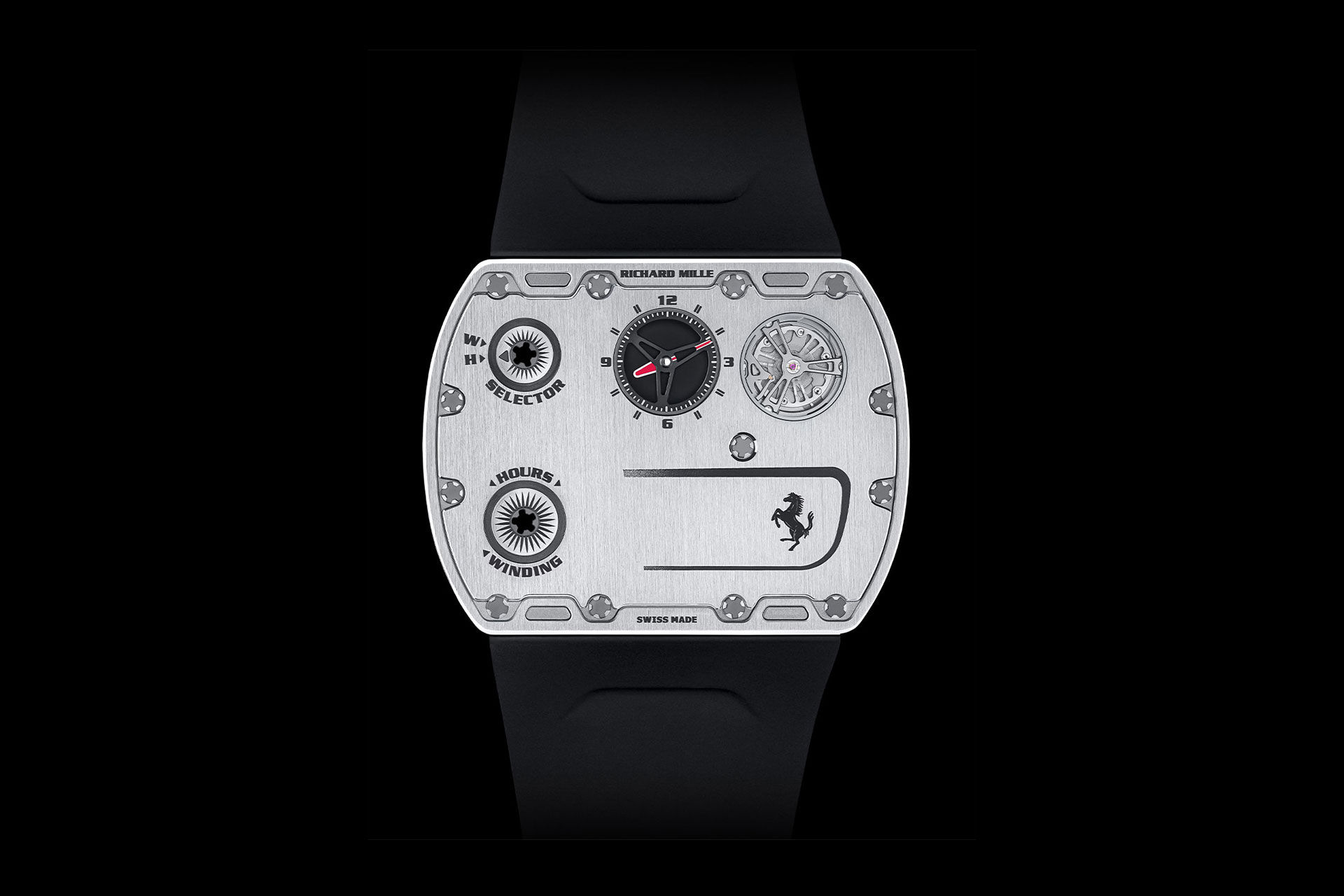 Cased out of Grade 5 Titanium, the dial is black with white index markers. We also spot Ferrari’s proud prancing horse up top. Underneath, the RMUP-01 calibre runs manually and tells hours minutes and seconds. It offers a power reserve of 45 hours.

So far, Richard Mille and Ferrari have confirmed that this will be a limited edition of 150, each costing a hefty USD $1.8 million dollars. Certainly one of the most expensive watches surfaced in a while and it’s quite a high jump from Bulgari’s Octo Finissimo Ultra which was sold at USD $407,000.