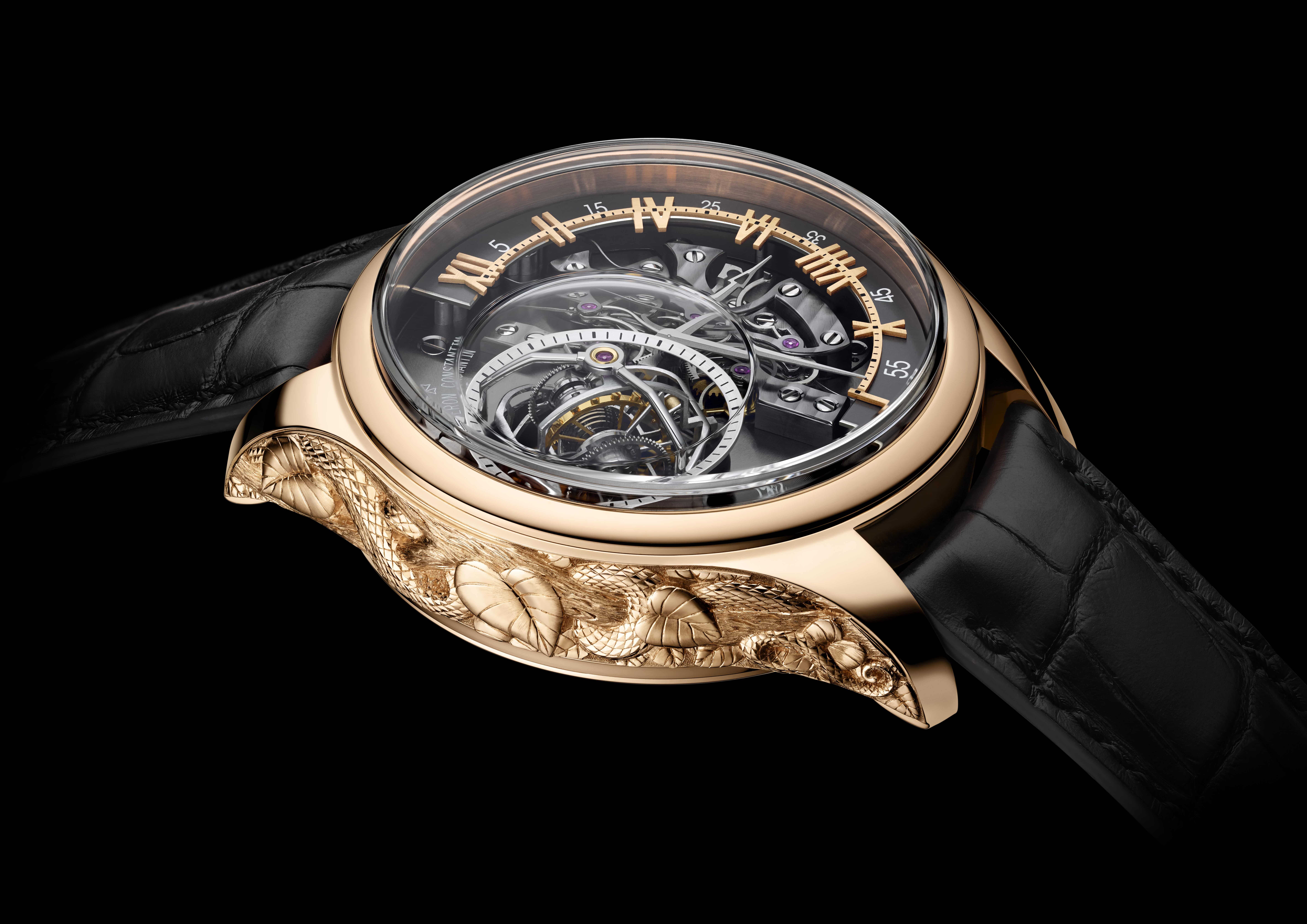 Vacheron Constantin’s prowess in watchmaking is well known, and every year, the brand seems to outdo itself with new offerings. The latest work of art that has the world of horology sitting up and taking notice is the Les Cabinotiers Mécaniques Sauvages collection, which embraces elements from the animal kingdom to craft timepieces enriched with grand complications and rich Swiss watchmaking expertise.

Consisting of the 14-Day Tourbillon Lion, the 2755 Eagle, the Mysterious Animals Tiger, the Grisaille Falcon, and the flagship timepiece, the Armillary Tourbillon Snake, the line translates the strength of a bird, reptile, and feline to convey the values of the maison: Tradition and innovation, craftsmanship, attention to detail, and elegance.

The Armillary Tourbillon Snake is the highlight of the collection and features 57 complications, and splits the dial into a bird-caged grand tourbillon and a classic skeletal dial, which displays its architectural elegance. The feature that sets this timepiece apart from the rest is its strikingly engraved case belt, which features a never-seen-before intricate slithering reptile artistry. With this timepiece, Vacheron Constantin has filed for six new patents.

The watch has instantaneous double retrograde hour and minute indicators on the right side of the dial. The tourbillon on the timepiece floats on a double-axis with one-minute rotations, and is placed inside a Maltese Cross, Vacheron Constantin’s iconic symbol, with the cage on the opposite side.

The dial is a slate grey aluminium that bears 18K gold-plated titanium numerical indicators and standard titanium hands. The device is powered by a 1990 calibre and strapped on by hand-stitched Mississippi alligator leather with large square patterns representing a snake’s skin. The timepiece is said to have 65 hours of power reserve, and is manually wound.

Sharing a similar case-belt engraving style like the Tourbillon Armillary Serpent Snake, the 2755 Eagle is just as elegant and sharp. The 48-hour power reserve that comes with the 2755 calibre is purely manual wound and is developed exclusively by the watchmaker. The dial is comparatively sober than the other heavily detailed timepieces. It features a minute repeater, a single-axis tourbillion, and a perpetual calendar, and the navy dial complements the gold case beautifully.

The glorious Leo has been embraced with a majestic portrait and a bi-axis tourbillion, making it one of the capsule’s most regal pieces. The 2260 calibre powers the mechanical timepiece with a stunning 336-hour power reserve. The dial features a Grand Feu translucent and grisaille enameled face, which resides over an 18K 5N pink gold case, hand-engraved with an ornamental pattern. The entire watch case includes a magnifying glass to admire its detailing.

The tiger has been noticeably given a bit more attention. The dial comes with a classic 4-window face that’s graced by a peeking tiger. Day, date, minutes and hours, are all enriched underneath 8K yellow gold, hand-engraved ‘bamboos’, and a white gold, hand-engraved tiger. The 2460 G4 calibre is said to power the timepiece for 40 hours while the winding is automatic. Unlike the other timepieces, this comes with a shiny 950 platinum case to match its buckle.

The Grisaille Falcon strives for simple elegance, which begins with an grisaille enamelled falcon on the face. This timepiece is definitely on the sober end of the spectrum with its monochrome dial, and 18K white gold hands and case. The timepiece comes with a 2460 SC calibre, which is much sturdier compared to the rest. This automatic piece has a power reserve of 40 hours.

The price of all the models are all available upon request, but due to the bespoke nature of the Les Cabinotiers department, it’s likely that the Armillary Tourbillon Serpent was produced with a client in mind.