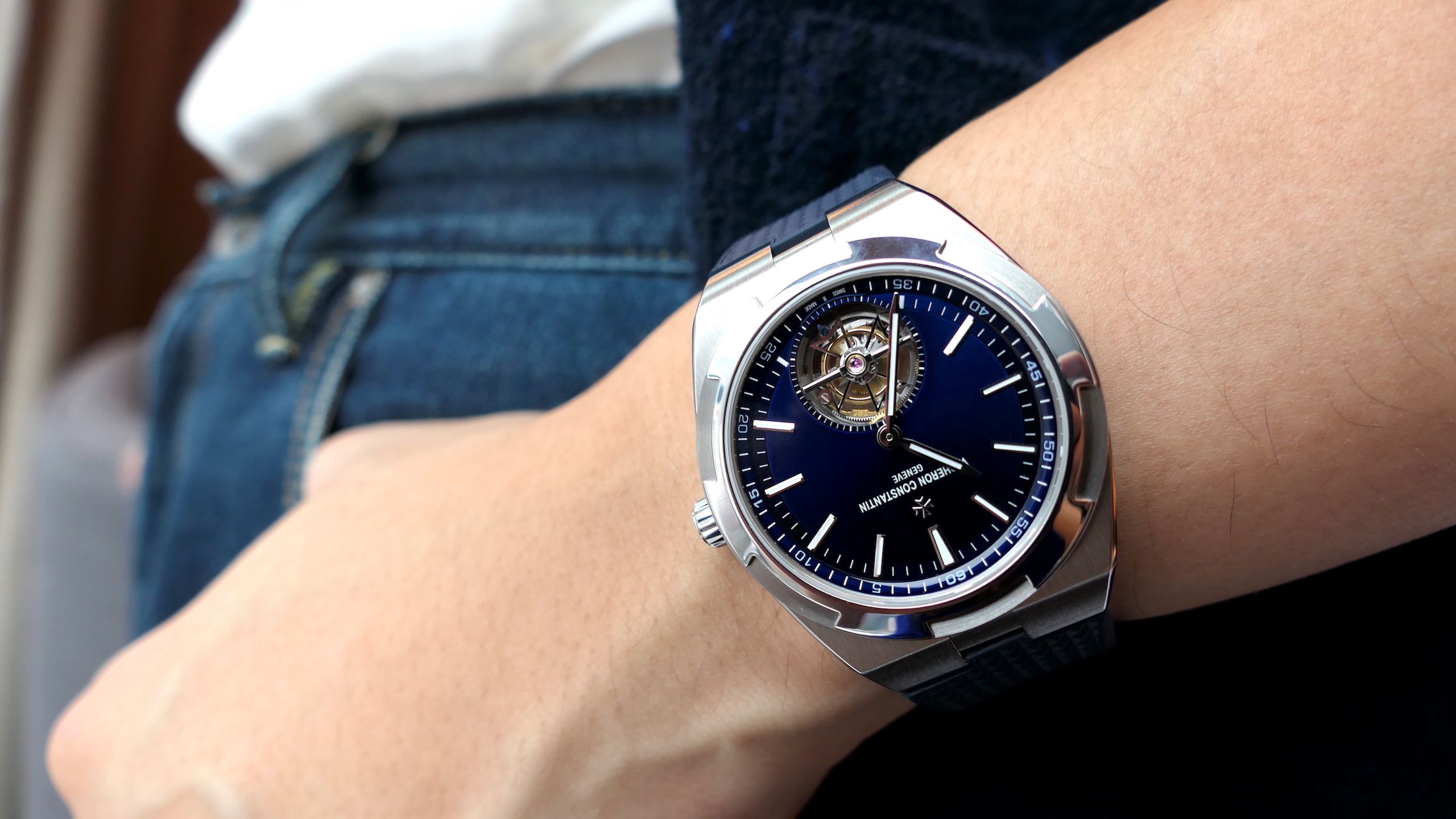 Following the introduction of a chronograph, GMT, and perpetual calendar, the tourbillon is the latest complication to join Vacheron Constantin’s ever-popular Overseas lineup. The new Ref. 6000V ticks off many of the hottest boxes for 2019 — it’s a sporty stainless steel number, that can be worn multiple ways, with the audacity to incorporate a dress watch complication — and in doing so, reveals a more casual element of Vacheron’s usually refined approach to watchmaking. It’s also a refreshing outlier in terms of how the brand has historically presented the tourbillon: re-envisioned for 2019 as a pure aesthetic flourish, encased in a package that’s purpose-built for daily wear.

Before we dig into meatier topics (read: the dial), it’s worth reiterating that the entire Overseas family is pretty damn wearable. With the notable exception of the Worldtime, the collection is mostly concentrated in the 42.5mm size range. Looking at diameter and thickness, you immediately get the feeling that Vacheron designed this new Tourbillon with feet planted firmly in both the modern and ‘golden’ era of watchmaking. The new model (42.5mm) has incredible presence on the wrist: with enlarged surface areas helping to capture the level of finishing present in the bezel (polished) and case band (brushed).

I was immediately struck by just how impactful the proportions were — in three days, half a dozen people stopped me in an effort to work out what I was wearing — and I’m willing to bet that for most collectors, this is going to be a clincher. That isn’t to say that the Overseas Tourbillon is obnoxiously large. If anything, the overall effect is of a watch which wears smaller than its stated size, thanks to the sobering influence of an extremely slim case (10.39mm) and stubby integrated lugs. Thin enough to slip under a dress cuff, yet big enough to register at a distance, this new Overseas sits somewhere between a daily wearer and casual option, and is more than capable of playing in either sandbox.

Like many of my favourite SIHH releases, the new Overseas is a watch that really hits its stride once you get to the dial. Blue is a popular oftentimes generic colourway for a sports watch, but the sophistication of this particular iteration immediately identifies it as the work of an extremely high-end watchmaker. The base dial is sunburst-brushed before being coated in consecutive layers of blue lacquer. Optically, the outcome is a multispectral blue, exhibiting ink-like qualities at the centre, before gradually becoming lighter and more metallic at the edges. (In the image above, the blue is unusually electric at 9 o’clock and towards the flange.) On the wrist, I found the tonal nuances to be extremely satisfying, and I’d often make it a point to check the time under various lighting conditions in order to experience the dial’s various ‘moods’.

A first for the collection

When the new Overseas was originally unveiled in January, the biggest takeaway from Vacheron’s presentation was that this was the first model in the collection to feature a solo tourbillon. The fact that there hasn’t been such a release since 1996 underscores just how atypical the new Overseas is. The brand has traditionally couched tourbillons in a language of necessity — most notably, in its ‘Grande Complication’ watches — so it’s refreshing to see them finally acknowledged, primarily, as works of elaborate mechanical art.

As you can see above, Vacheron have chosen a fairly classic method for implementing the complication, displaying it in a large open-worked recess at 6 o’clock. The brand are responsible for some of the most refined-looking tourbillons on the market, and there’s a neat tension in the way that it visibly juxtaposes the surrounding steel case and electric blue dial. Unsurprisingly, make is another area in which Vacheron’s watchmakers haven’t skipped a single beat. The Maltese-cross-shaped carriage capitalises fully on the brand’s recognisable iconography while exhibiting various handmade details that are beautifully intricate. The bridge securing the tourbillon carriage in place, for instance, is topped with a single gold-set chaton, and the process by which this one component is decorated (requiring hand-bevelling and black-polishing) takes the individual watchmaker almost 12 hours.

The movement powering the Overseas Tourbillon (dubbed the calibre 2160) is a fairly recent addition to Vacheron’s stable. Originally developed for the Traditionelle line, this release marks the first time the 2160 has gone into an Overseas model. Beyond the patently high degree of finishing we’ve all come to expect from Vacheron — every screw that’s visible through the caseback has been chamfered — the new movement offers plenty in the way of modern technology. To prevent views of the tourbillon from being obstructed, Vacheron equipped the calibre 2160 with a peripheral rotor — itself a platform for more ornate hobnail-style finishing. This is where things start to get interesting: unlike conventional winding masses, the rotor is bidirectional, meaning that every time the rotor moves it’s able to wind the mainspring backwards and forwards. In conjunction with the ‘Magic Lever’ system (a kind of clutch originally developed by Seiko), this means that the 2160 is able to achieve an 80-hour power reserve, despite the demanding energy requirements of the tourbillon.

I’ve already spoken ad infinitum about how Richemont are rolling out quick-change technology across their various group-owned watch brands — those of you who read my Cartier Santos review know the drill — and I’m happy to report that Vacheron is no exception. Consequently, wearers of the Overseas Tourbillon have a trio of accessories to choose from, and are able to swap, in a matter of seconds, between two leather straps or the signature half-Maltese-cross bracelet. This effectively triples the watch’s versatility — anything up to black tie, in my opinion — and is a great way for Vacheron to differentiate itself from the competition.

At just shy of HK$900,000, it would be absurd to call the new Overseas Tourbillon ‘a value proposition’. That said, in the extremely narrow strata of the market that’s occupied by the Holy Trinity, that description does feel somewhat earned. Vacheron have crafted one of their best releases in some years; and the irony is that they achieved this by embracing a veritable maelstrom of contradictions. On the one hand, the new Overseas is a culture-savvy steel sports watch — destined to expand the clout of Vacheron beyond its archetypal, blue-blooded audience — and yet it’s also a feat of extreme horological sophistication. I guess that Old El Paso commercial was right: in 2019, there’s no reason we shouldn’t have both.

All photos shot on-location at The St. Regis Hong Kong.

Style Watches Tourbillon Watches Vacheron Constantin Vacheron Constantin Overseas
Randy Lai
Editor
Having worked in the Australian digital media landscape for over 5 years, Randy has extensive experience in men's specialist categories such as classic clothing, watches and spirits. He is partial to mid-century chronographs and a nice chianti.
Style Watches Drinks Tailoring Travel
Sign up for our newsletters to have the latest stories delivered straight to your inbox every week.

Must have: 6 chic luxury smartwatches to check out in 2022