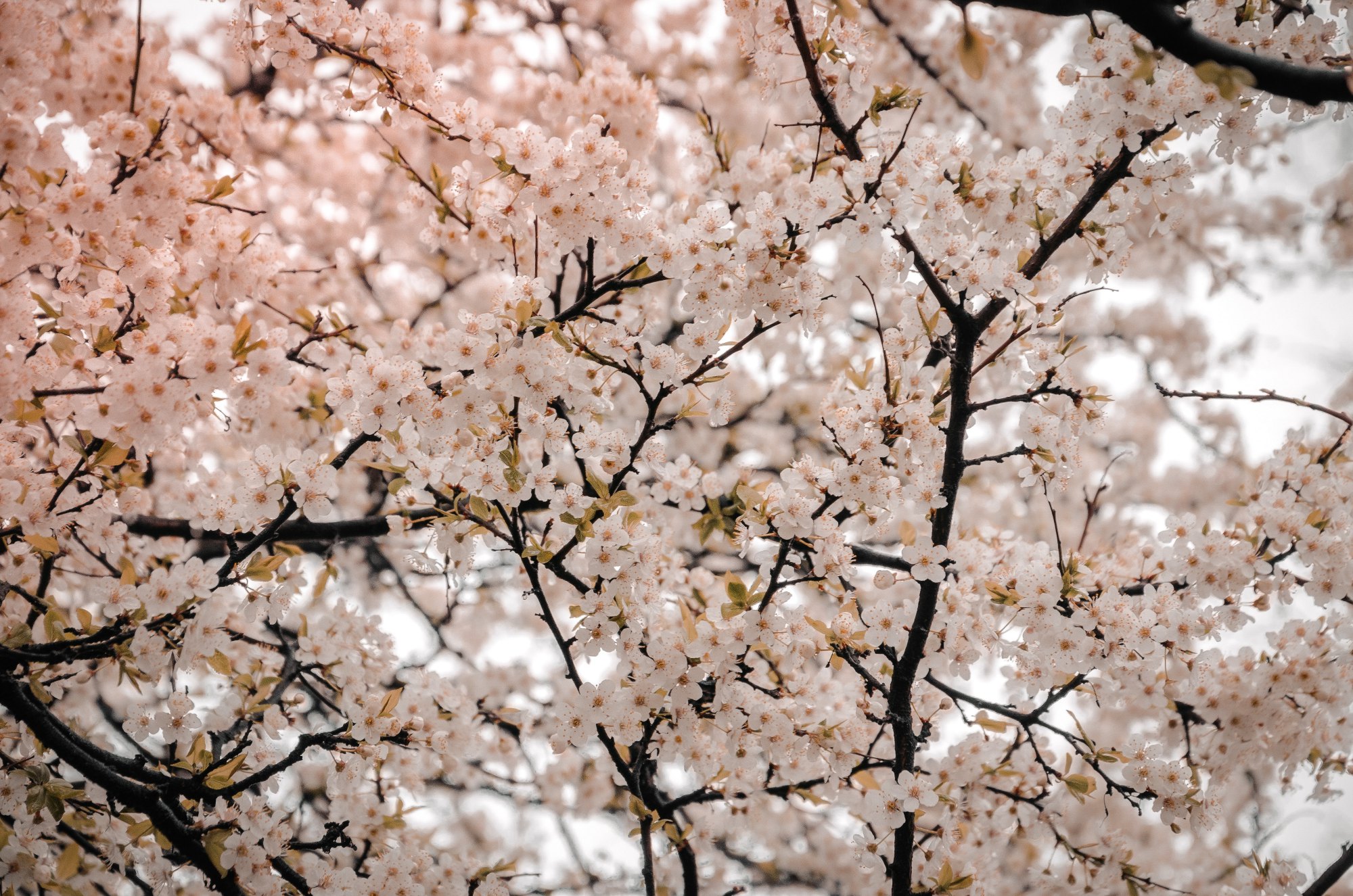 Here’s where you can catch cherry blossoms outside of Japan

With sakura season fast approaching, it’s only a matter of time before the streets of Japan will be thronged with too many tourists shoving their selfie sticks in your face. You may be torn between wanting to experience the fleeting beauty of cherry blossoms for yourself and trying not to get stampeded down by tourists, but did you know that you can view the sakura outside of Japan too?

Consider this a cunning life hack: while everyone heads to Japan for sakura viewing, you’re elsewhere in the world seeing them too — minus the crowd. Most people will already be familiar with the cherry blossom viewing festival in Washington D.C. The American state commemorates annually the date that Mayor Yukio Ozaki of Tokyo gifted cherry trees back in 1912. But Washington D.C. isn’t the only city that the Japanese government has gifted sakura trees to — there are also other cities with ties to the land of the rising sun, such as Hamburg. The city housed many Japanese companies that have offices there, and in return for their hospitality, Japan gifted them 5,000 sakura trees in 1968. Brazil too has cherry trees brought over by Japanese immigrants, which resulted in one of the most beautiful places to view the sakura blooms.

Armed with this knowledge, it’s time to book your tickets to view cherry blossoms in a country that isn’t Japan. Read on to find out where and which time of the year to visit. 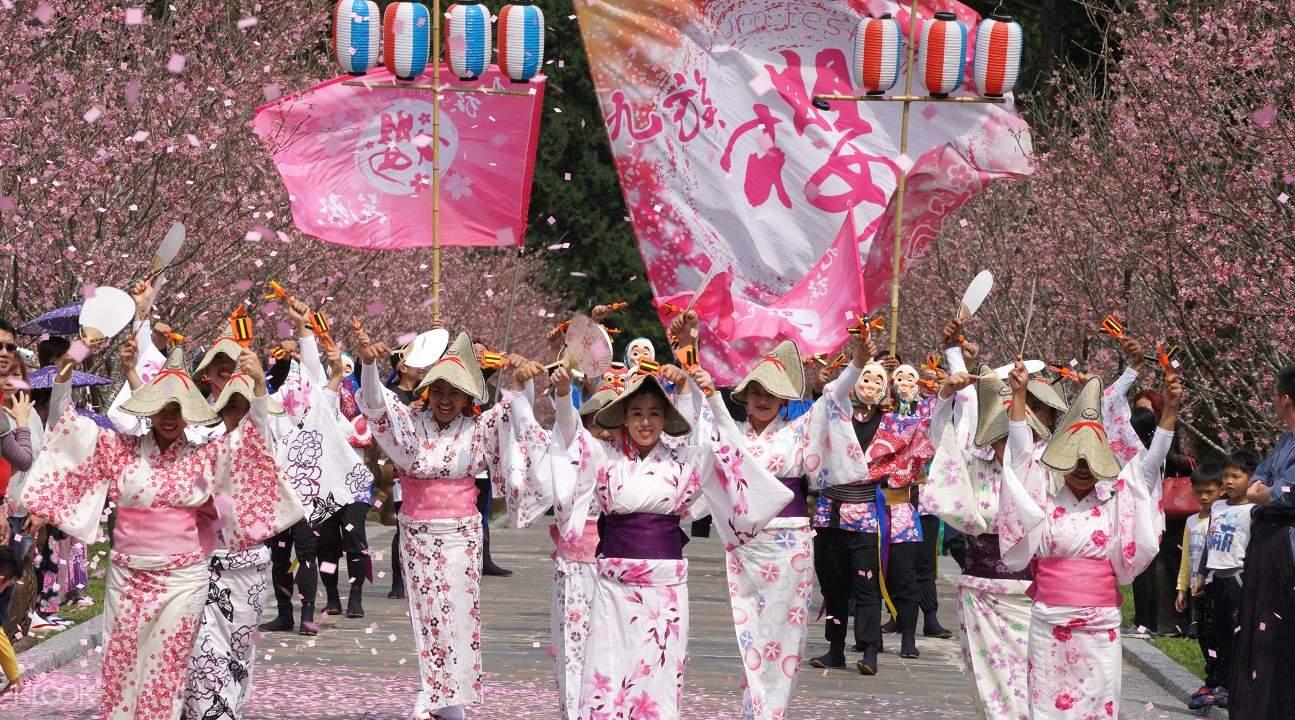 The Formosan Aboriginal Culture Village is one of Taiwan’s most known theme parks, and also a great place to know more about the country’s aboriginal people. It also happens to house Taiwan’s largest cherry blossom festival every February. During the festival, you’ll be able to see cultural performances on the Taiko drums as well as nighttime illuminations on the 2,000 cherry trees that line the village. While we may have passed the festival celebrations for the year, there’s always next year to plan for.

When to view: Early February to late March. 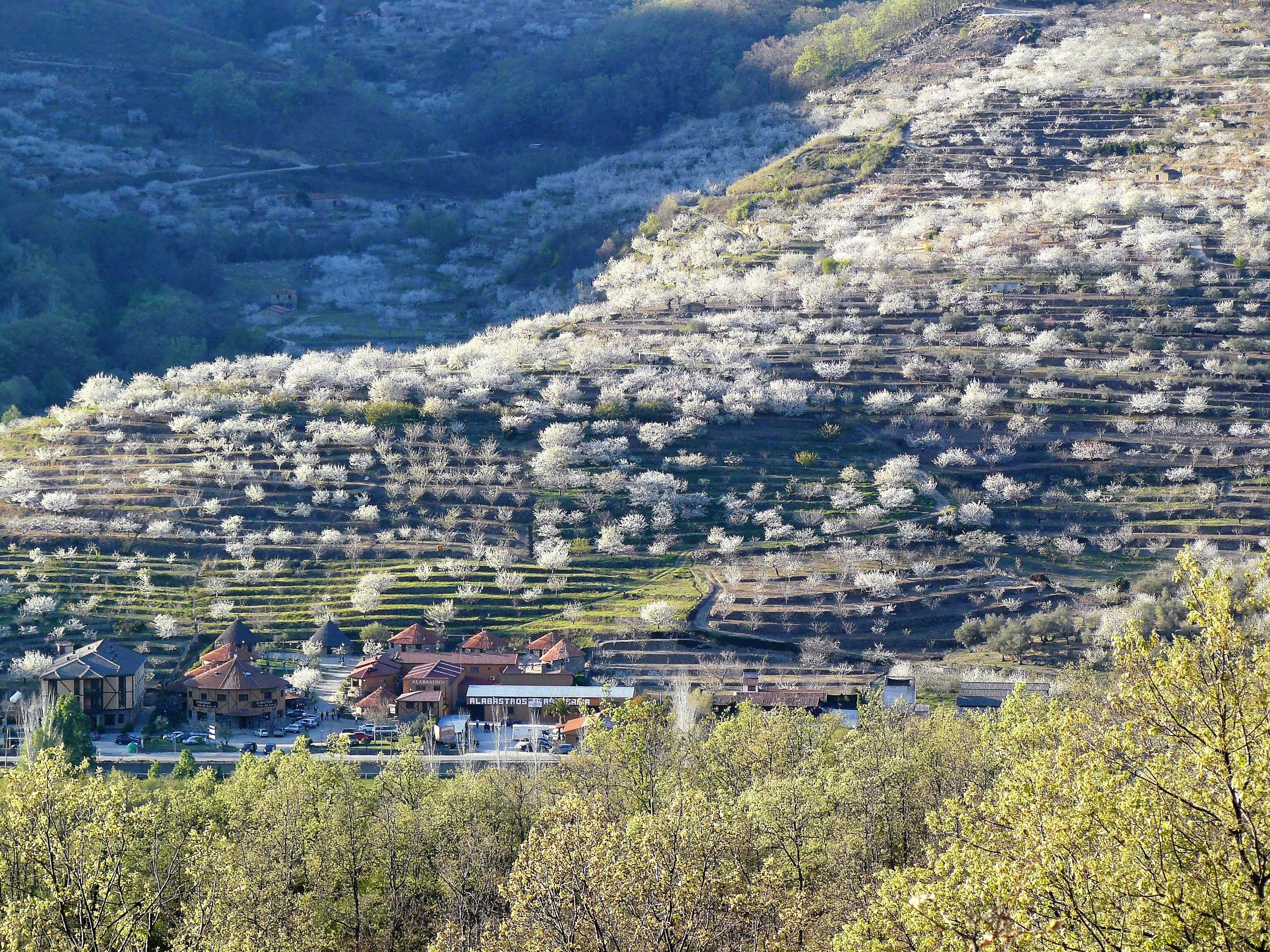 You might have seen a vineyard filled with grapes, but have you seen a valley filled with cherries? Jerte Valley in Spain is one of the country’s major producers of cherries, which means that in spring, the entire valley will be filled with the blooms of the cherry blossom. While it’s not pink like the Japanese sakura, the white cherry blossoms are equally as stunning — especially when there are more than a million trees grown there. They even have a festival called the Fiesta Cerezo en Flor to celebrate the spring season.

When to view: Mid March. 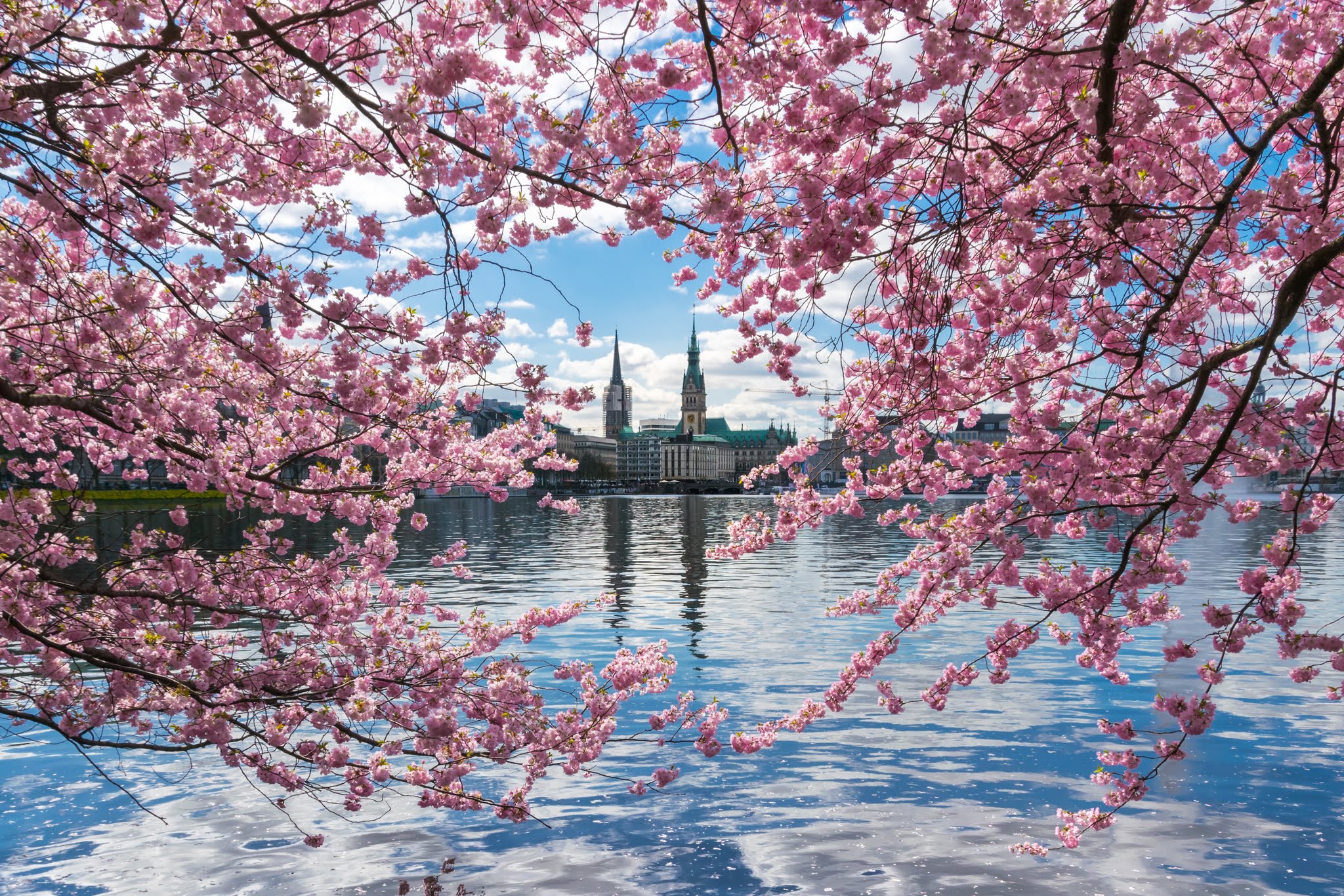 Hamburg has strong ties with Japan, thanks to a great number of Japanese companies having their offices in this German city. As a sign of gratitude for Hamburg’s hospitality, the Japanese government gifted them 5,000 cherry trees in 1968. Since then, each spring has seen many beautiful cherry blossoms bloom, and the city annually holds a festival with fireworks included. Take a walk through Alsterpark to bask in the blooms.

When to view: May. 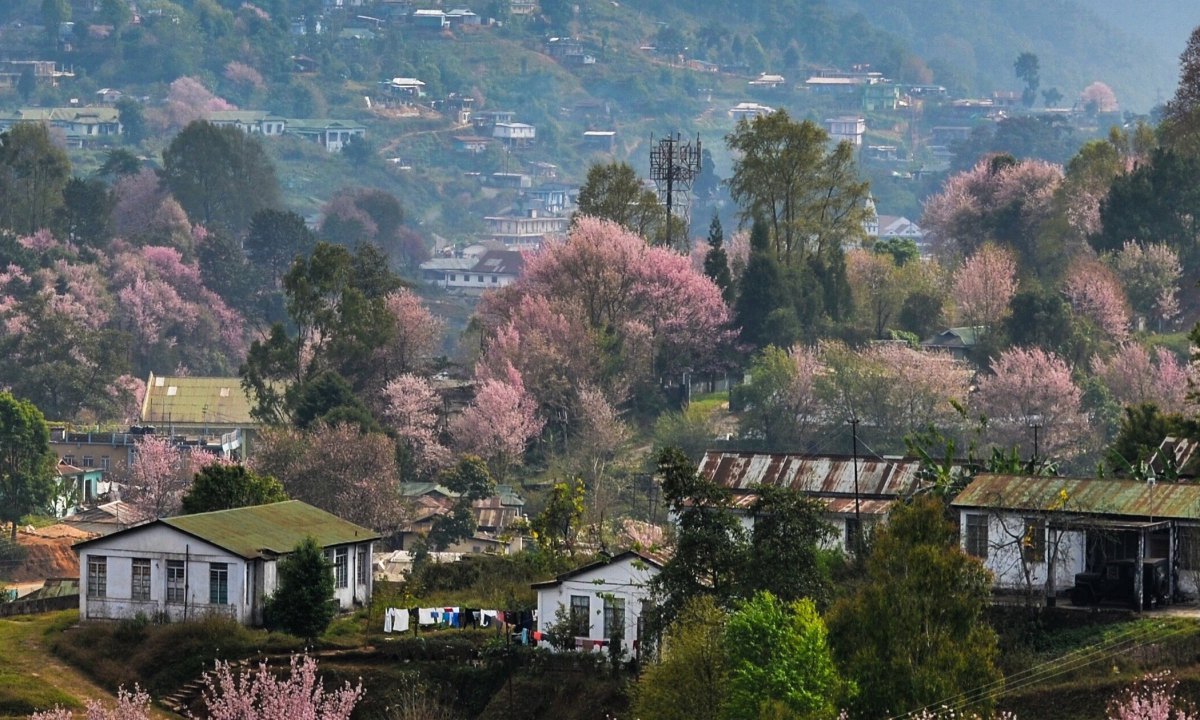 Shillong is a hilly town in Meghalaya located northeast of India. While most people would think that cherry blossoms only bloom in spring, the Himalayan cherry blossoms of Shillong flowers in autumn, thanks to the cooler climate of the area. To view the blossoms in its entirety, visit Ward’s Lake, Polo Grounds, Jawaharlal Nehru Stadium, and State Convention Centre where the India International Cherry Blossom Festival is usually held.

When to view: November. Once upon a time, Salem was nicknamed cherry city, thanks to its many cherry orchards. Although they’re no longer a cherry capital, some cherry trees still remain in the city, blooming every spring to everyone’s delight. Most of the cherry trees are planted along the Capitol Mall, and you can sit on the grass to admire them on a nice sunny day.

When to view: March. 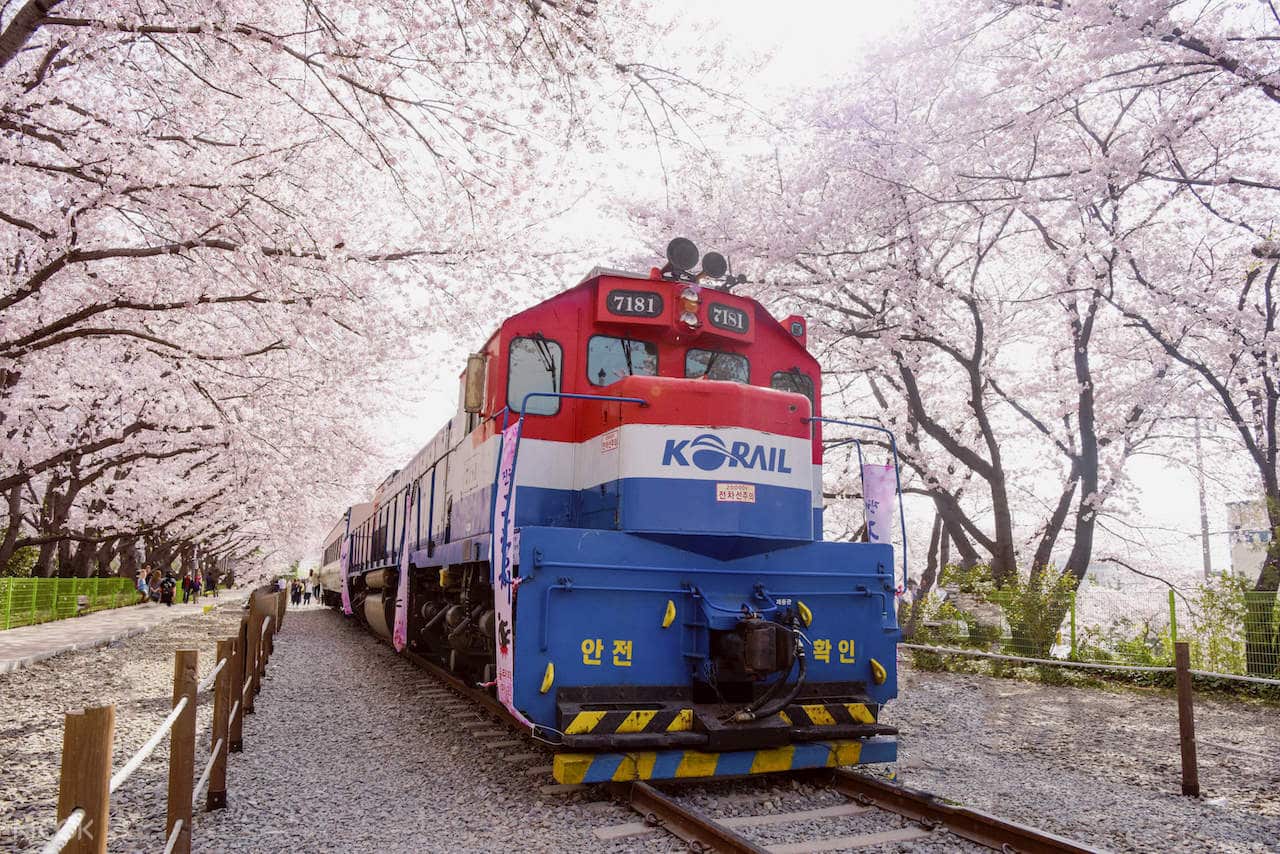 Another popular destination to view the cherry blossoms outside of Japan is in Jinhae, a port city in Changwon, South Korea. Its annual Jinhae Gunhangie Festival attracts over two million visitors a year, and is South Korea’s biggest spring festival. Best spots to catch the blooms include the Romance Bridge where the flowers grow in a canopy over the Yeojwacheon Stream, as well as Gyeonghwa Station where the trees line the railway tracks. Fun fact: the spring festival was originally a memorial service to commemorate Admiral Yi Sun-sin’s services.

When to view: Late March to April. Did you know that you could also find cherry blossoms flowering in our neighbouring country Thailand? Up north in Chiang Mai, Himalayan cherry trees bloom over the winter months thanks to the colder climate. The Khun Wang Royal Project (also known as the Khun Wang Royal Agricultural Research Center) is a great place to view the cherry blossoms. The blanket of pink Himalayan cherry blossoms takes over the area, making it a beautiful pink paradise. The blooms usually only last for two weeks, and they are in full bloom by the second week of January.

When to view: January. 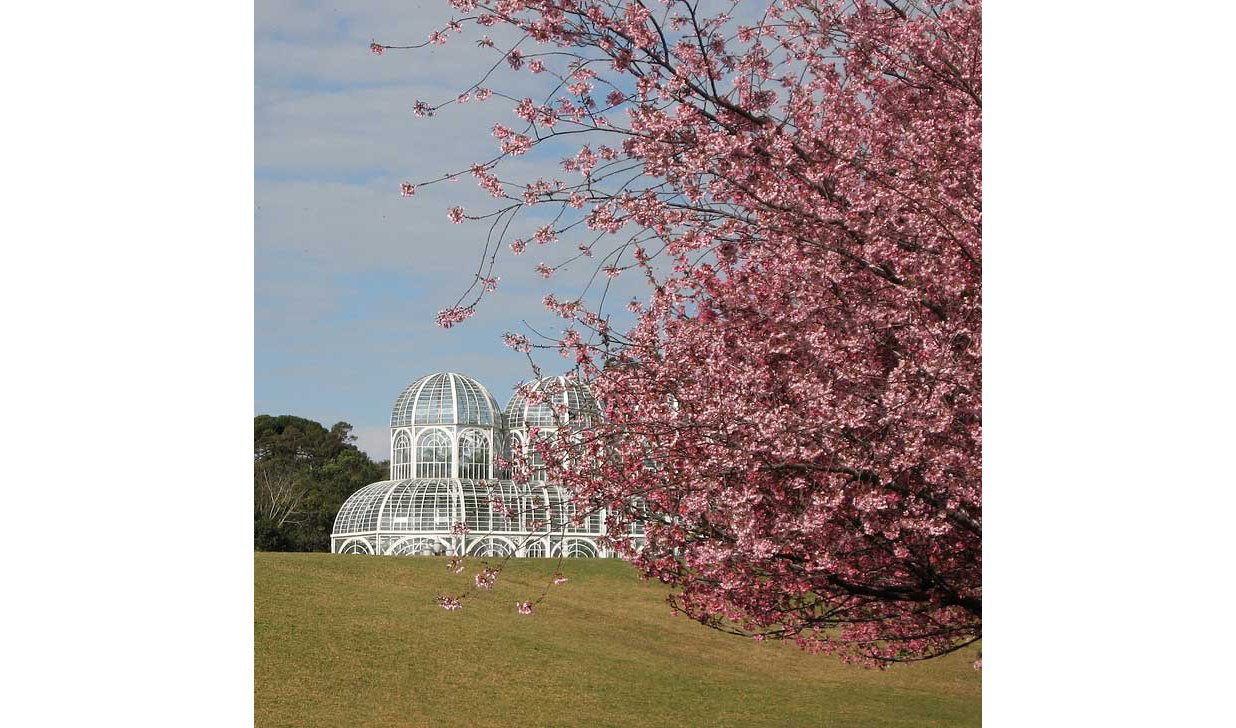 Interestingly enough, Brazil actually has the largest population of Japanese people outside of Japan. The migration was at its height in the early 20th century, and the Japanese brought over several cherry tree seeds. One of the best places to view the results of this migration is in the Jardim Botânico gardens in Curitiba, Brazil. The perfectly manicured gardens are not only home to some of the most beautiful flowers in the world, but also cherry blossoms. However, the cherry blossoms only bloom during winter — not spring.

When to view: July.

cherry blossom outside of japan sakura season sakura outside of japan sakura viewing cherry blossom viewing
PohNee Chin
Editor, Kuala Lumpur
Poh Nee is the editor and writes about travel and drinks. When she's not living out her holiday dreams via Google Earth and sipping on an Old Fashioned down at the local bars, you can find her snug at home bingeing on Netflix and mystery fiction.
Travel Drinks

Charming homestays in Nainital that are perfect for work and play

These are the most beautiful olympic stadiums and venues ever built