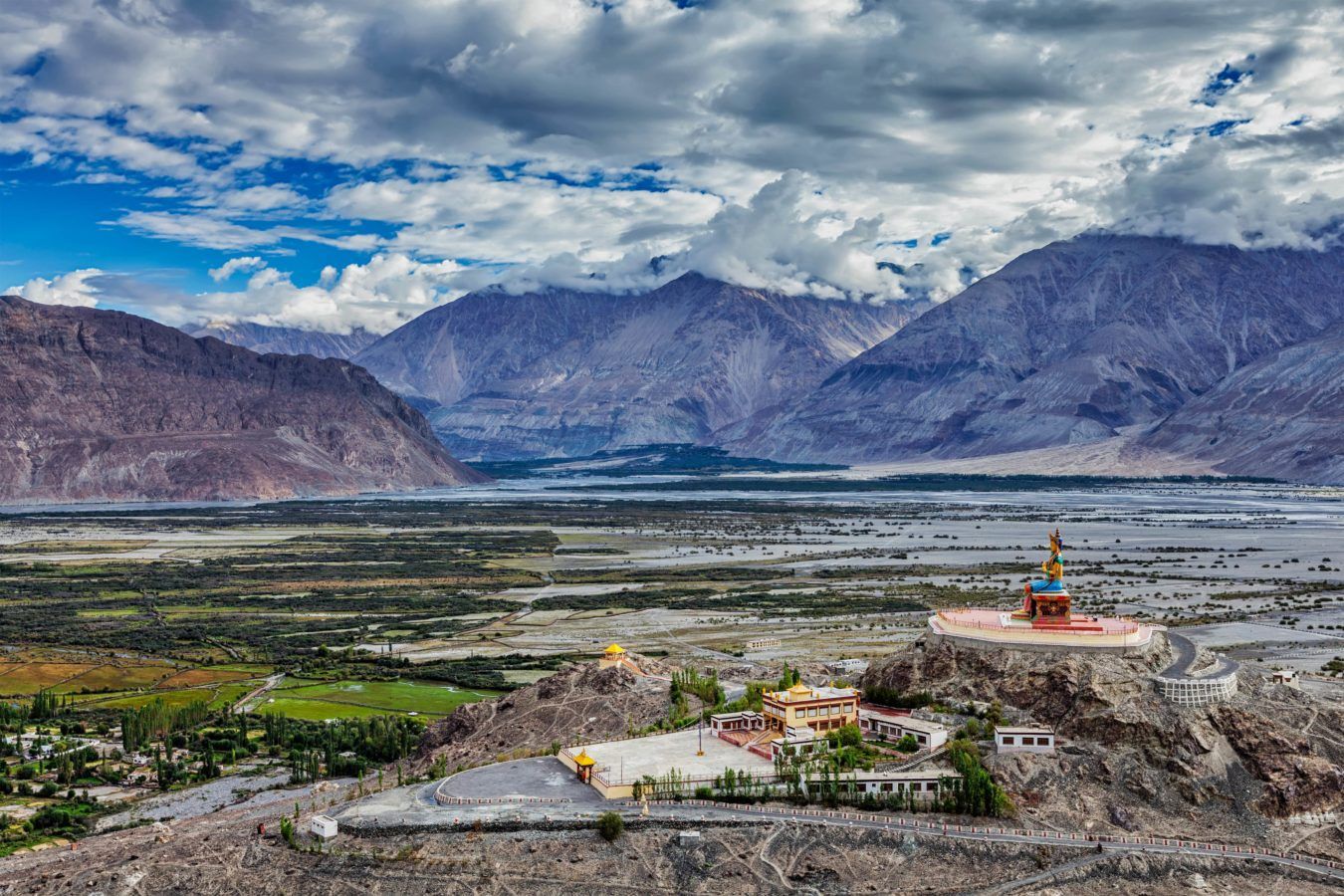 Bollywood has shown Indian destinations in a new light and made viewers fall in love with these scenic places time and again. Be it the picturesque ghats of Benaras or the (then) unexplored destinations of Pangong Lake and Ladakh, movies have highlighted the beauty of the Indian states like none other. So, if you want to travel to your favourite Bollywood film’s shooting locations that are scenic and serene, read on!

Ranbir Kapoor-Vaani Kapoor’s latest release, Shamshera, has been grabbing eyeballs for a number of reasons – a major one being its stunning shooting locations. The film depicts Kaza, but was shot in Nubra Valley – both equally stunning destinations in the Himalayas.

While this is not the first time such scenic locations have been used in Bollywood films, going back to them time and again only incites wanderlust. Whether it be the ruins of Purana Qila or the stunning City Palace in Udaipur, each destination has added a fresh flavour to the movies that you so love. So, if you’re inspired to go on a trip based on destinations used in movies, these Bollywood film shooting locations are some that you must check out!

Bollywood film locations that make for scenic spots to visit

Shamshera brought us scenic views from the Himalayan destinations of Nubra Valley. While portrayed to be Kaza, the shooting location is actually the valley, but if you ask us, both destinations make for some stunning views and travels. And in case you’re keen to know more, check out our travel guides on Kaza and Nubra Valley to plan your itinerary at these stunning, exotic locales.

Rajasthan has served as an inspiration for many movies and shows. Its stunning hill forts, expansive deserts and vast colours in terms of its buildings, cities and even the people have been used as an influence in movie sets. Amer (or Amber) Fort, located about 11 kilometres from Jaipur, is a popular tourist spot in the state, and has been featured in several movies so far, including Jodhaa Akbar, Bajirao Mastani (as the backdrop for the song, Mohe Rang Do Laal) and many more.

Fanaa takes you through the stunning old monuments and city life of Delhi. Be it Qutub Minar, Red Fort, Purana Qila, the lanes of Connaught Place or the city’s many auditoriums, the film shows them all. What’s more, the film is also a great reference for first-time visitors to the city to explore all that it has to offer. Other films you can take inspiration from are Rang De Basanti, Atrangi Re, Raanjhanaa and Ek Ladki Ko Dekha Toh Aisa Laga, to name a few.

Another state that has served as a stunning backdrop as a Bollywood film shooting location is Goa. The state’s capital, Panaji, was featured in the movie Drishyam, and its colourful colonies have long been depicted in movies such as the Golmaal series. What’s more, the ultimate youth movie, Dil Chahta Hai, saw the lead characters go on a road trip to this stunning state, exploring the ruins such as Chapora and Aguada Forts and Goa’s many beaches.

The stunning hill station of Ooty is a traveller’s delight. With air fragrant from the many trees and spices that grow here, to clouds that cover the place in a moist mist and a gentle, cool breeze, Ooty is the perfect place for you to unwind at and disconnect with your daily life. And what makes it all the more exciting for movie buffs is the fact that is one of the Bollywood film shooting locations that has been featured in Karwaan, Ajab Prem Ki Ghazab Kahaani and Barfi, to name a few!

The stunning valley has been featured in several movies and shows, be it Bobby, Kashmir Ki Kali, Highway, Jab Tak Hai Jaan, Mission Kashmir or many others. With its unique culture, gastronomic cuisine and scenic locations, the valley is definitely one place to visit.

Rajasthan has several stunning locations that have been captured in Bollywood films, serving as shooting locations for scenes, songs and more. Some of the popular movies that capture the beauty of Udaipur are Yeh Jawaani Hai Deewani and Dhadak, to name a few. What’s more, the nearby sites of Kumbhalgarh and Chittorgarh make for great places to visit if you are interested in history, and have watched the movie Padmaavat!

Benaras and its ghats have graced the silver screens and OTT platforms many times. Be it Raanjhanaa or The Last Color, both movies show different facets of the city and its mane ghats, highlighting stories from time immemorial.

Kolkata exudes a quiet, old-world charm. The city, with its kaali-peelis, cultural hubs, ghats and more, is a beautiful place to visit. The city has been featured in countless movies, be it The Namesake, Piku or Kahani, and makes for a must-visit.

There’s something magical about Marine Drive. The cool, gentle breeze, soothing sounds of waves lapping up the shore and vast views of the water make for a calming sight. What’s more, several movies, especially those based in Mumbai, have had scenes shot here, be it Wake Up Sid, Munnabhai MBBS or more!

Pangong Lake came to the forefront when 3 Idiots released. The scenic spot was featured in the climax of the movie, and introduced the country to the then less-travelled-to spot of Ladakh. Now, the destination is among the top-visited spots by locals and international tourists alike, and offers some stunning views.

When talking about scenic locations where films were shot in India, Punjab cannot be left behind. The gorgeous city of Amritsar, especially the Golden Temple, has been featured in several movies including Rab Ne Bana Di Jodi, and the Wagah Border has served as a backdrop for iconic scenes in Veer-Zaara, Main Hoon Na and more.

Bollywood Films best travel movies bollywood shooting location
Anushka Goel
Anushka likes to spend her time reading, scrolling through Instagram for some travel inspiration or looking after her plants. She loves reading about the latest skincare and makeup but tries to make mindful choices and live sustainably.
Sign up for our newsletters to have the latest stories delivered straight to your inbox every week.

9 picturesque resorts for the destination wedding of your dreams