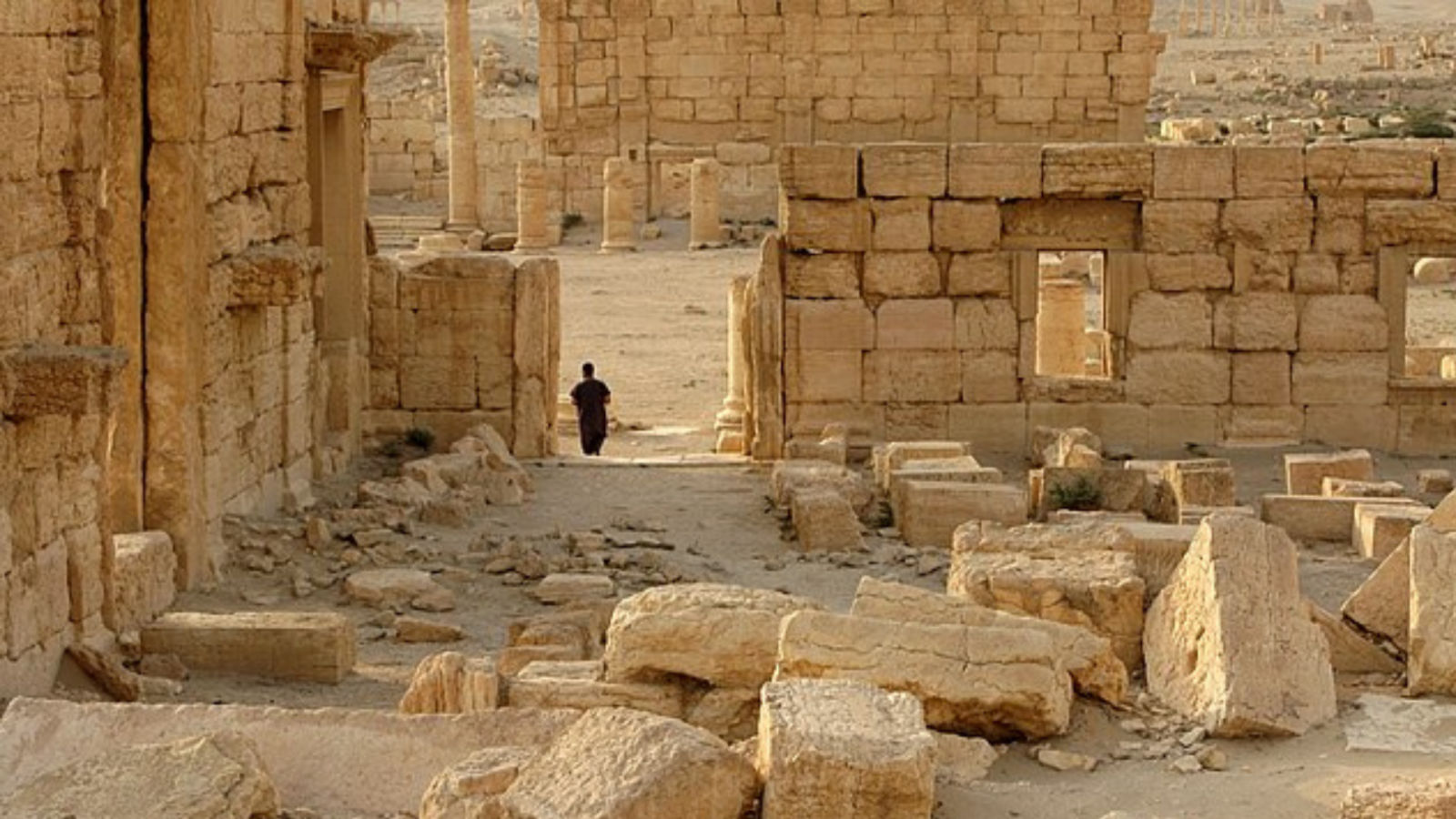 Former Director-General of UNESCO Irina Bokova once aptly said, “Heritage, before being a building, is a consciousness and a responsibility. When violent extremism attacks culture and cultural diversity, it is also necessary to respond with culture, education, knowledge, to explain the meaning of sites and share the message of tolerance, openness and humanity that heritage carries.”

Our heritage helps us understand our ancestors better and should be considered our greatest cultural wealth. Unfortunately, natural calamities and wars have made it difficult to preserve this inheritance.

Over the years, wars or terrorist attacks have targeted many historic buildings, religious and architectural sites. Consequently, we are losing our cultural or spiritual heritage to human conflict.

UNESCO describes Palmyra as “an oasis in the Syrian desert, north-east of Damascus, Palmyra contains the monumental ruins of a great city that was one of the most important cultural centres of the ancient world. From the 1st to the 2nd century, the art and architecture of Palmyra, standing at the crossroads of several civilizations, married Graeco-Roman techniques with local traditions and Persian influences.”

During the 2015 civil war in Syria, the Islamic State of Iraq and Syria (ISIS) destroyed many parts of UNESCO’s World Heritage Site Palmyra, including many important archaeological sites such as the Temple of Baalshamin, Monumental Arch and Tower of Elahbel.

After their expulsion from the ancient site, Syrian forces learned that some of Palmyra’s structures were saved from destruction. Thus, plans were made to restore the destroyed parts of the heritage site.

In 2016, the demolished Arc of Triumph of Palmyra was replicated in London’s Trafalgar Square. This referred to the reconstruction of the damaged ancient city in the coming years.

A three-dimensional digital model of Palmyra was prepared by Russian specialists in 2020, who have begun restoration works in cooperation with UNESCO and the Department of Antiquities and Museums in Syria.

The ISIS conquest in 2015 also ruined many cultural and other heritage sites in one of the oldest Syrian cities, Aleppo. This includes the Citadel, a UNESCO World Heritage Site, which was severely damaged as it was used by ISIS and the Syrian forces. The castle used to be one of the world’s largest and oldest castles that dated back to the third millennium BC. While it has lived through many civilisations, like Greek, Byzantine, Ayyubid, and Mamluk, a major chunk of its construction was done in the 12th and 13th centuries during the Ayyubid period.

Another UNESCO World Heritage Site that bore the brunt of this heinous attack was The Great Mosque of Aleppo. While its tall, thin tower (minaret) was destroyed completely, other parts of the heritage site were severely damaged by bombs and gunfire. It used to be an iconic part of Syria that contained the remains of Zechariah, the father of John the Baptist.

The minaret of the central Umayyad Mosque, along with around 60 percent of the covered marketplace (souk) and the ancient houses made in the first century AD, are among the ruins of the old city.

Many religious and historical buildings in the Malian city of Timbuktu that included numerous tombs and mausoleums of Sufi saints, medieval shrines and the 15th century Sidi Yahya mosque, were attacked and demolished by Malian jihadist Ahmad al-Faqi al-Mahdi in 2012. As a result, the first-ever war crime trial for the destruction of a cultural monument was appealed to the International Criminal Court (ICC) in 2016.

According to UNESCO, 14 of Timbuktu’s destroyed mausoleums were rebuilt by 2015 as per traditional construction methods and with funding from UNESCO. Al-Mahdi was sentenced to nine years’ imprisonment in 2016.

However, Timbuktu is now an endangered World Heritage Site because of the armed conflict in the region.

The Buddhas of Bamiyan, Afghanistan

The Buddhas of Bamiyan were the tallest standing statues in the world, with one towering at 55 meters, before being destroyed by the Taliban in 2001. They were key evidence of the Gandharan school of Buddhist art in the Central Asian region. The statues stood as an important stop on the legendary Silk Road, since the 6th century.

Under the direction of Mullah Mohammed Omar, the Taliban used tanks, artillery shells and dynamite to damage the cultural monuments.

While several attempts were made to restore the statues of Buddhas, the reinstallation of the monuments were put on hold because of the disputes regarding the original materials to be used. As of now, what remains is the ruins of the Bamiyan Valley.

The beautiful residential complex of the Qing Dynasty was completely destroyed by British and French troops during the Second Opium War in 1860. Constructed during the 18th and early 19th centuries, the compound housed lofty temples and pavilions that were surrounded by lush, exotic gardens.

If you happen to visit Beijing’s Old Summer Palace today, you will see the area has been transformed into a beautiful park open to visitors. Just like the image above, you can see many ruins of the former palace still standing there.

More so, its replica was inaugurated at Hengdian World Studios, a film studio in Dongyang in 2015.

When someone mentions Hiroshima, the first thought that may come to your mind is the atomic bomb explosion during World War II that destroyed the city.

Hiroshima housed Japan’s former Prefectural Industrial Promotion Hall which was designed by Czech architect Jan Letzel and constructed in 1915. It was used for displaying and selling prefectural products along with showcasing art shows and other expositions. However, when the War intensified, a number of government agencies took shelter in the Hall.

It suffered major damage when the US Air Force dropped the first atomic bomb in 1945. The remains of the Hall called A-Bomb Dome are now a part of the Hiroshima Peace Memorial Park.

The Park serves as a symbol of the continuation of international peace and was inscribed into the UNESCO World Heritage Sites list in 1996.

Known as one of Malta’s mesmerising and iconic buildings that was designed by English architect Edward Middleton Barry, the Royal Opera House was inaugurated in 1866. Unfortunately, it was destroyed by bombs of Germany’s Air Force aka Luftwaffe during World War II in 1942.

Several attempts were made to reconstruct the theatre in the past. Finally, in 2013, an open-air theatre called Pjazza Teatru Rjal was built amid the Royal Opera House ruins to protect the cultural heritage while encouraging emerging, modern forms of artistic production.

Also known as The Mosque of the Prophet Younis, Jonah’s Tomb was considered as the final resting place of the biblical prophet and one of the important religious sites for both Christians and Muslims. It was built in the 8th century in Mosul, Iraq.

However, in 2014, the entire religious site was blown up by the ISIS who claimed the act was done as a protest against the mosque which had become a place of apostasy, instead of a prayer area. In fact, there were several nearby homes that were also damaged in the act.

The beautiful and grand Gothic church was built between the late 14th and early 15th centuries in Coventry, United Kingdom. It was first constructed as a chapel or the Earl of Chester’s castle in the twelfth century but then was expanded in the late fourteenth century to eventually become the largest parish church in England. It earned the status of a cathedral in 1918.

However, during World War II, the Cathedral was also badly damaged by the Germans, leaving just the spire, tower and outer walls intact.

A ‘new cathedral’ that represents Coventry’s medieval and modern history was officially rebuilt in 1962 alongside the ruins of the old cathedral.

UNESCO world heritage site World War II Heritage sites terrorist attacks
Moyena Parikh
Moyena loves exploring personal development and spirituality. She believes in the power of words. She is also passionate about food, dancing, finance, and her family.
Lifestyle Culture Entertainment Wellness
Sign up for our newsletters to have the latest stories delivered straight to your inbox every week.

Walking tours to museums visits: Top free things to do in London