You must visit these endangered places in India before they disappear

India is home to a unique amalgamation of nature, culture and history. However, many of these sites are disappearing fast because of climate change and man-made activities. Here are 12 such endangered places in India.

India has had a long history that’s filled with changing civilisations, historical incidences and a rich culture that transcends over thousands of years. Each of the eras have left an impression that remains till date, in the form of cultural practices, mythology, stories and monuments. This is not all. The stunning landscape of India has been around for centuries, making the country a must-visit for travellers of all kinds – adventure, nature, history-buffs, and leisure.

However, over the last few years (and in some cases, the last couple of decades), some of these stunning destinations have faced rapid deterioration. This can be attributed to the changing climate, increase in pollution, and global warming, along with destructive human activities such as overfishing and mining.

As the world loses several such unique places, here’s a list of the endangered places in India that are at threat of vanishing completely. While these are still around for a few more years to visit, do bear in mind to not indulge in any activity or practice (such as drawing on the walls, plucking flowers or harming the wildlife, along with spreading pollution) that disrupts the environment at these destination. In fact, work towards helping in preserve the places for future generations.

Endangered places in India to visit before they disappear

The largest river island in the world, Majuli island is located in the Northeastern state of Assam. Accessible by boats, it is a stunning place with lush greenery and rich culture. However, the once over 1,200 square kilometre island is now under 400 square kilometres, a result of floods, erosion, and climate change.

This stunning mangrove forest in West Bengal is among the endangered places in India. The forest is a beautiful tourist destination, with lush green trees, rainy forests, and flora-fauna, and makes for a stunning travel destination in India. However, due to an increase in pollution, rising sea levels, and aforestation, the forest is receding, and may vanish soon.

The Western Ghats are among the most stunning destinations in India, complete with misty clouds, pleasant air and the amazing views. The place is known for the many treks and hill stations that it is home to, but it is among the destinations that are at the risk of vanishing soon. A Times of India report states that about 35 per cent of the original ghats have been destroyed between 1920 till 2013! So, in case you do plan to visit the ghats, for activities such as the Rajmachi Fort trek or just for a weekend getaway, be mindful to not harm the nature (including all flora nad fauna) here.

Hemis National Park is a beautiful place in the pristine union territory of Ladakh. It is a must-visit to spot the famous snow leopard. However, the population of these magnificent creatures has been dwindling over the years, falling slowly, making both the animal as well as the park engangered.

Kashmir’s largest freshwater lake, the Wular Lake, draws a huge number of tourists each year. However, over the years, the lake has been shrinking rapidly, making it among the endangered places in India. This has happened due to erosion and siltation, which is filling up the lake, and the hunting of waterfowl and several fish unique to this lake and landscape. This has rendered not only the water body, but the animals in it, too, as engangered.

Rakhigarhi is among the few sites from the Harappan civilisation that lie in India. The place, located in Haryana, draws in tourists every year. However, the reason it may vanish soon is the fact that locals seem to keep stealing from the site, selling artefacts to buyers and taking away from the ancient history of the place.

Ram Sethu, or Rama Setu, is also known as Adam’s Bridge, and is a chain of limestones that connect India’s Dhanushkodi with Mannar island in Sri Lanka. This bridge is believed to have been constructed by Rama (in the epic Ramayana), to allow him and his army of monkeys to travel to Lanka to rescue his wife, Sita, from Raavan. However, the Sethusamudram Shipping Canal Project is said to disturb the remains of this bridge, which may lead to the disappearance of the Sethu.

The fort, a UNESCO World Heritage Site, is a must-visit in Rajasthan. The place is also called Sonar Killa due to its yellow hue, and its stunning architecture makes it a popular backdrop for shoots and more. And, the place still houses local residents. However, the increasing population is affecting the fort walls, making it weaker, because of which the fort may disintegrate.

Travel
A staycation at Amanbagh, Rajasthan — where pink is the colour of warmth and wellness 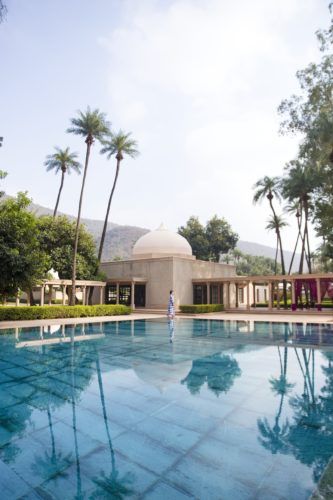 Travel
Thanks to #VicKat, we bookmark 6 destinations in Rajasthan for a pre-wedding shoot

Located in southern Meghalaya, Balpakram National Park serves as the home of the local Garo tribe. Legend has it that this is the place where the souls of those who have departed go to rest. The lush green area is filled with local flora and fauna, and houses plenty of wildlife. This is one of the reasons why it is popular among nature lovers and photography enthusiasts. However, due to mining activities, the forest area has been receding, and lies in danger of disappearing soon.

A post shared by Lakshadweep Tours and Vacation (@lakshadweeptourism)

Blast fishing and pollution have had an adverse effect on the coral reefs of Lakshadweep. The union territory is a pristine region that has restricted tourist access, and the destination is no less than an international island vacation spot. However, due to increasing human disturbance in the form of changed navigation paths and activities mentioned above, the reefs here lie in danger of being extinct.