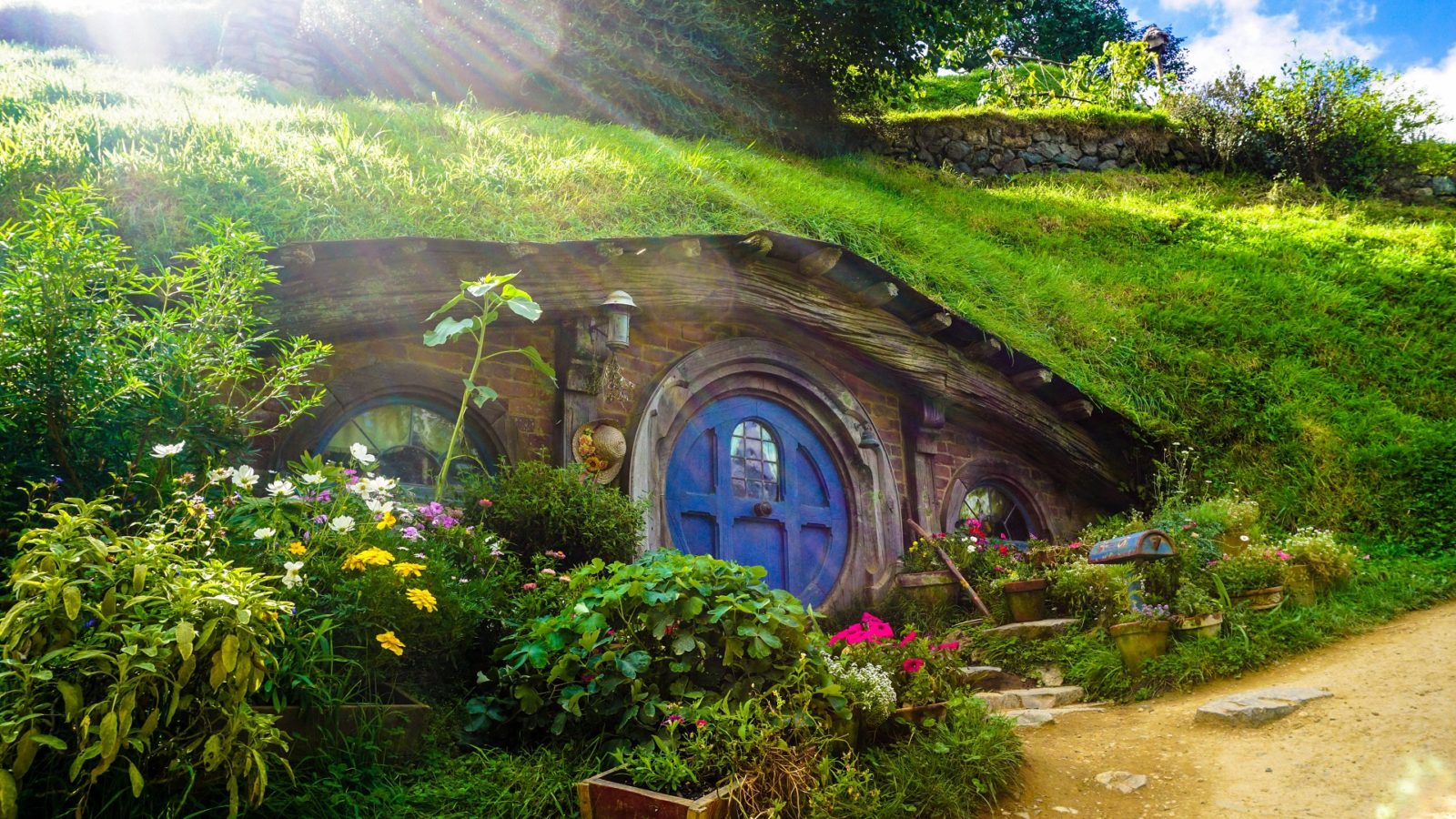 Based on the books of the same name by the author J.R.R. Tolkien, Peter Jackson’s The Lord of the Rings trilogy is one of the greatest ever made. The epic high fantasy films astounded fans with the level of special effects, gripping story, fantastic performances and amazing cinematography. The Lord of the Rings filming locations are today major tourist attractions in New Zealand, the island country where it was shot in its entirety.

The untouched landscape made it possible for Jackson to visualise Middle Earth, created by Tolkien, in New Zealand. There were more than 150 locations used, some of which have since become unforgettable for being the setting of major scenes in the films.

Mountains, vast open grasslands, volcanoes, ancient forests and rolling green hills, all made it possible, with a little help of technology, to bring to life the grandness of the epic film saga.

The locations are spread across New Zealand’s North Island and South Island. Of course, it is difficult to see all of them, so here are some of the best ones.

Matamata in Waikato district is perhaps the most famous of The Lord of the Rings shoot locations. Matamata’s rolling green knolls became the Shire and the fictional Hobbiton was thus constructed near the town.

Hobbiton is the only set from the two film trilogies that are still standing, which perhaps adds to the popularity of the place for those who want to see what a quaint hobbit home looks like.

A guided tour through Hobbiton is the only way to explore the place, which brings alive the joyous experiences of life in the Shire.

Visitors can see the Green Dragon Inn, the mill, the Party Tree and the low dwellings with circular doors known as ‘hobbit holes’. There are 44 of those beautiful houses in Hobbiton, including Bag End — the home of Bilbo and Frodo Baggins.

Hobbiton is only 16 kilometres from the town of Matamata from where regular tours to the film location can be availed.

Fans of The Lord of the Rings will instantly recognise this 2287-metre-tall mountain as the appropriately named Mount Doom. In the films, the One Ring was consumed by the lava of Mount Doom to bring an end to the evil Sauron.

The mountain is located in Tongariro National Park on the north island, which itself was depicted as Sauron’s land, Mordor, in the films.

One of the most recognisable filming locations from The Lord of the Rings in New Zealand, Mount Ngauruhoe, like the fictional Mount Doom, is an active volcano. It has erupted over 70 times between 1839 and 1975 but has become cooler over the decades.

The 20-kilometre Tongariro Alpine Crossing day hike, one of New Zealand’s nine Great Walks, takes visitors past Mount Ngauruhoe. But the mountain is sacred to the Maori and, therefore, trekkers are encouraged not to climb the mountain itself.

One of the best things about Mount Victoria is that it doesn’t require a guided tour for exploration. This is the most easily accessible of all of The Lord of the Rings locations from Wellington — just about walking distance from the city.

Walking tracks lead up to the top through enchanting pine forests. The reward for reaching the top is panoramic views of Wellington city, its harbour and the ocean.

In the films, Mount Victoria was the filming location for Hobbiton Woods. This is where the hobbits hide from the pursuing ringwraiths, or black riders, in The Fellowship of the Ring (2001). The exact location falls on the Hataitai to City Walkway.

Putangirua Pinnacles are geological formations carved by erosion for millions of years. The place is close to Martinborough in the Aorangi National Park. The unusually shaped hoodoos make the place appear truly otherworldly.

The pinnacles served as the Dimholt Road in the ‘Paths of the Dead’ scene from The Return of the King (2003) featuring three main characters from The Lord of the Rings trilogy — Legolas, Aragorn and Gimli.

One of the most amazing The Lord of the Rings shoot locations, the Putangirua Pinnacles has three routes for exploration. Visitors can walk to a higher elevation for a better view of the rock formations and also walk between the pinnacles.

They can also walk further to the nearby Lake Onoke and Palliser Bay.

Better known to The Lord of the Rings fans as Rivendell from the trilogy, the park is about a 45 minutes drive from Wellington. An ancient rainforest nestled along the foothills of Tararua Ranges, the park is home to endemic plants such as Rātā and Rimu some of which are over 1200 years old.

Rare birds such as yellow-crowned parakeets and New Zealand falcons can be seen here.

The magical woods justify why it was picked as the filming location for the home of the elves in the films and the Fords of Isen. There is an Elven archway replica next to which visitors can pose for photos for their Insta posts and tell the world that they were here.

The forested lands were also where the scenes depicting the formation of the fellowship were shot.

Kaitoke Regional Park is a great place for mountain biking and hiking. The Te Awa Kairangi, or Hutt River, cuts through the forests, offering the more adventurous souls the thrill of kayaking on rapids and the leisurely ones the pleasure of secret swimming areas.

An overnight camping trip with family is guaranteed to bring the visitors closer to nature.

Purpose built in the 1960s, Twizel is the biggest town in the Mackenzie District of Canterbury Region in South Island. For Peter Jackson, it served as one of the top filming locations in New Zealand for his epic high fantasy film series.

The Twizel was the site of one of the most significant scenes from the film — Battle of the Pelennor Fields involving the men of Rohan and Gondor against the ferocious orc army.

Interestingly, the extras for the epic battle scene were mostly residents of Twizel. The exact location of the battle is on private land but a guided tour can be arranged at Twizel.

Twizel is the gateway to Mount Cook National Park and is surrounded by gorgeous mountains across vast grassy fields. It is a major tourist destination during the summer season, which in New Zealand is sometime between November and February.

Fishing for salmon in lakes and rivers around Twizel is something that can also be tried.

Even before its association with The Lord of the Rings films, Fiordland National Park in South Island was renowned for one of the most famous natural attractions in New Zealand — the Milford Sound, which Rudyard Kipling described as the ‘Eighth Wonder of the World’.

The Fiordland National Park is part of the UNESCO World Heritage site Te Wāhipounamu (Place of the Greenstone), and is known for its glaciers, lakes, rivers and rugged mountains.

Snowdon Forest inside the Fiordland National Park was depicted as Fangorn Forest, where Gandalf whistles for his horse Shadowfax, where he transforms into Gandalf the White and where Aragorn tracks the hobbits into the forest in The Two Towers (2002).

Te Anau, a town near the national park, is the best place to begin the exploration of Fiordland.

In one of the greatest scenes from The Return of the King (2003), the most critically acclaimed of The Lord of the Rings saga, a series of beacons are lit to signal for aid as the war against Sauron’s orc army draws near.

Mount Gunn in Waiho Valley near Franz Josef in the South Island served as one of the major filming locations for the scene.

The Franz Josef glacier can be best explored in one full sweep from the air. Flight operators take visitors on helicopter rides across the outstanding landscape, an experience that has no parallels.

But those who want to explore on foot, there is the challenging  Franz Josef walk.

The first 15 minutes of the walk are breezy as it passes through the forest. It then gets to the rocky riverbed and ends at a lookout from where the beautiful glacier can be seen at a distance.

Located near Queenstown in New Zealand’s South Island, Skippers Canyon is certainly among the top filming locations in New Zealand though it appeared very briefly in The Fellowship of the Ring (2001).

The scene where Skippers Canyon appears is, however, one the best in CGI and perhaps set the mood for what was to follow. Pursued by the Ringwraiths, Arwen summons a flood which takes the form of furiously galloping horses to wash away the ominous black riders.

The river where the scene was filmed in Skippers Canyon is known as Shotover.

But reaching Skippers Canyon will require courage of a different kind as the gravel road is rugged and one of the most dangerous in the world due to the steep cliffs on one side.

Another of the best filming locations from The Lord of the Rings, the Twelve Mile Delta is located on Lake Wakatipu near Queensland. It was the setting for the Ithilien Camp from the films, where the famous “potatoes” talk between Sam and Gollum took place.

It was also where Frodo, Sam and Gollum saw Faramir and his rangers battle Haradrim  on a gigantic Oliphaunt.

A walk along the Bob’s Cove Track from the Twelve Mile Delta campsite is the best way to appreciate this geological wonderland abundant with ancient marine sediments and fossils.

Queenstown is also known for Deer Park Heights, which was partly the setting of the kingdom of Rohan. Nearby places Glenorchy, Paradise and Arrowtown also served as shooting locations for settings such as the beech forest of Lothlórien and the Gladden Fields.

New Zealand The Lord of the Rings Filming Locations Hobbiton Wellington
Manas Sen Gupta
Manas enjoys reading detective fiction and writing about anything that interests him. When not doing either of the two, he checks Instagram for the latest posts by travellers. Winter is his favourite season and he can happily eat a bowl of noodles any time of the day.
Travel Culture Entertainment Food