The Indian Railways is constantly evolving, improving passengers’ experiences and setting new records. Now, the Vande Bharat train, among the latest offerings by the railways, is set to get many upgrades – higher speed as well as bigger TVs, increased energy efficiency and more. Here are the details.

The Indian Railways recently announced the newer version of the Vande Bharat train. These trains, which are set to launch soon, will be even more comfortable for travellers and take them to more destinations, with improved features such as a lesser weight, 0 to 100 kmph speed in 52 seconds, WiFi content on demand, and a lot more. These Vande Bharat 2 trains will reach a maximum speed of 180 kmph, reports state.

One of the most important features of this train is its high speed. The train can reach up to 100 kmph speed in just 52 seconds, which is way faster than any other train. To put this into perspective, the train broke the record of the Bullet train during its trial run between Ahmedabad and Mumbai, covering the distance in just over five hours, reports media.

The trial run of Vande Bharat Express was conducted between Ahmedabad & Mumbai today. 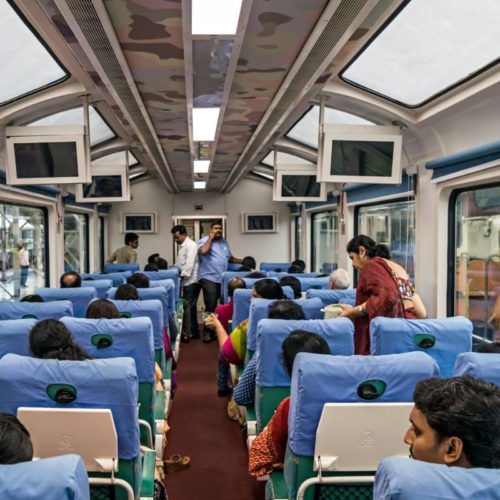 Apart from this record-breaking speed, the new Vande Bharat train is set to come equipped with a 32-inch LCD screen instead of the earlier 24-inch TVs, lower weight of 392 tons instead of 430 tons, WiFi content on demand, 15 per cent more energy efficient ACs that come with dust-free clean air cooling with dust-free clean air cooling of traction motors, and the list goes on. The side recliner facility, which was available only to Executive Class passengers, will now be available for all, reports add. Not only this – the train will even be able to reach a speed of 160 kmph in just 130 seconds. This is 16 seconds faster than the earlier version, which reached the speed in 146 seconds.

The railways target at manufacturing 75 such trains by August 2023, a report states. Railways minister Ashwini Vaishnaw said, “We have shown that a fully loaded water glass has not shaken at the speed of 180kmph, but, it shook the world,” writes Hindustan Times.

These are the most Instagrammable landmarks in India; take note