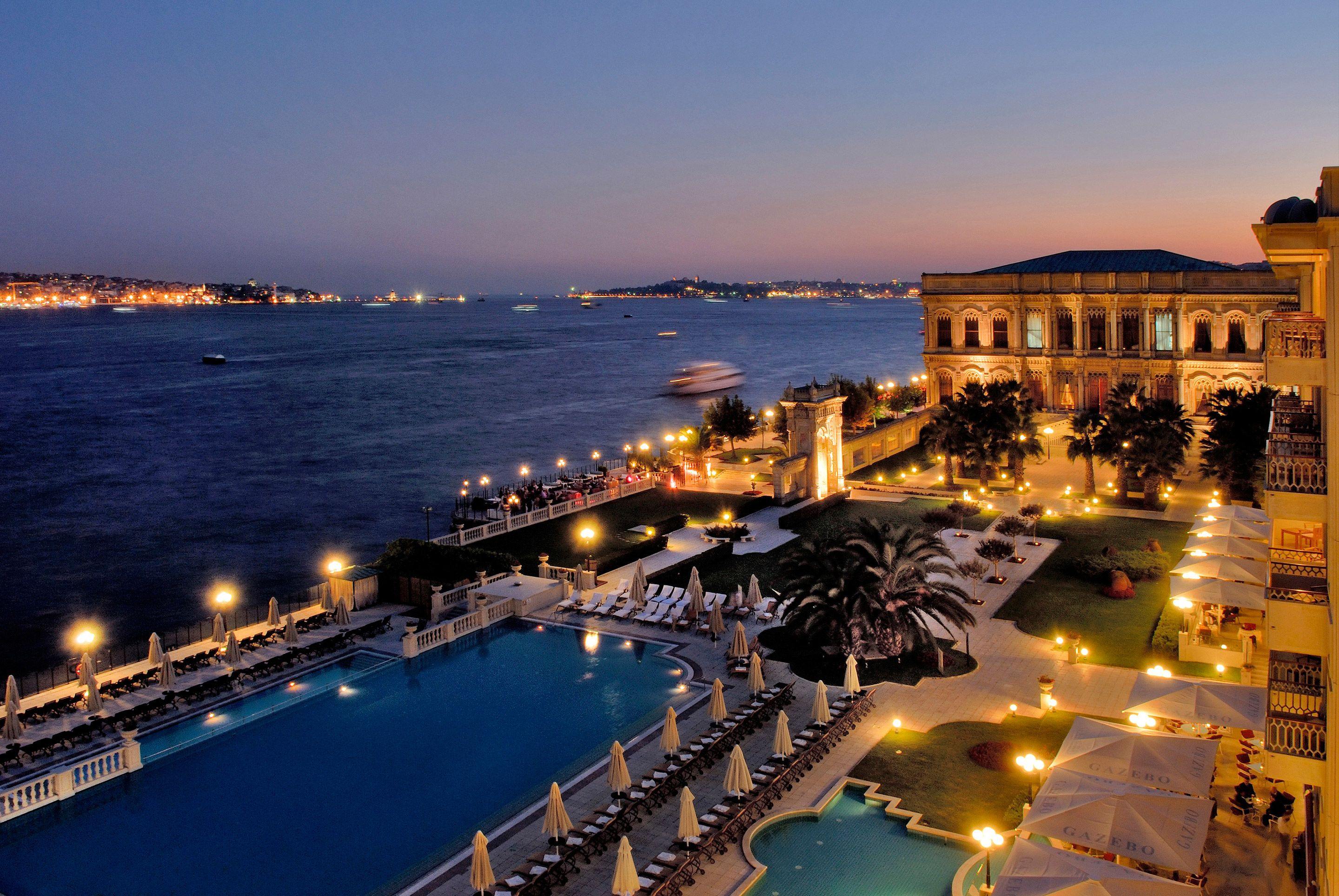 It was in 2012 that I had first visited Istanbul, and every time I had mentioned my impending trip to someone who had been there, one word came up more than any other to describe the city – vibrant. The people, the colours, the traditions, the ambience – ‘vibrant’ seem to encapsulate Istanbul perfectly. Of course, when I did visit the city, it was evident why. The Bosphorus that neatly bifurcates yet melds the ‘Asian’ part of the city with the ‘European’; the mosques that are representative of more than one faith; the food that is influenced by several cultures; the people who straddle legacy with modernity – everything personified Istanbul’s spirit. This year, I added another reason to that list: Ciragan Palace Kempinski Istanbul.

The Ciragan Palace Kempinski Istanbul, part of the prestigious The Leading Hotels of the World portfolio, is one of the top luxury hotels in the city, set by the river Bosphorus, and with a history to boot. With a historic building on its grounds, and celebrating every aspect of Turkey’s culture, it’s a stay that could in itself be a wholesome holiday. Here are eight reasons you need to make it a part of your 2020 travel bucket list.

For a sense of history

What better way to experience Turkey’s rich past than to live it every day? A stay at Ciragan Palace Kempinski Istanbul is the first step. The original building of the hotel dates back to 1863, when Sultan Abdülâziz started its construction. Meaning ‘light spreading’ in Persian, the Palace has hosted people like Empress Eugenie de Montijo of France, the wife of Napoleon II, and also the opening of the Ottoman parliament in 1909. After a fire destroyed it in 1910, it was left unkempt for several years, till in the early 90s when it was completely restored and a modern hotel building added next to it.

The hallways of the original palace are lined with artefacts that hark back to its past. The rich tapestry, baroque architecture, majestic chandeliers, and lavish suites are all in likeness to the lifestyles led by the sultans. There a stunning marble bath here is beyond the proof you’ll need to get an idea of the royal lifestyle of yore. Though today a popular wedding venue and stay for the wedding party, there’s nothing stopping you from booking a suite here.

Because the suites are really something else. While the modern building of the hotel has chic, contemporary rooms that have accents of Turkish design, it’s really the suites where the magic happens. Canopy beds, dual rooms, expansive areas, undulating views of the Bosphorus, and state-of-the-art technology are the first steps towards an indulgent stay. In the original palace, the Park View Palace Suite is a maisonette-style duplex; the Bosphorus View Palace Suite has a 24-hour butler service; and the Corner Palace Suite is a three bedroom-duplex with sash windows. At the Sultan Suite, there’s a large hall, a living room, a dining area for 12, a jacuzzi and kitchenette, and two unique designed bedrooms. Past guests include Oprah, Madonna, and Bill Clinton. No wonder then that it is one of the most expensive suites in the world.

To experience the best of the Bosphorus

There’s something magical about a river on whose one side lies Asia, and on the other Europe. Get a ringside view of its blue waters as you wake up panoramic views of gently bobbing speedboats and the Bosphorus Bridge in the distance. In the evening, enjoy a drink at the bar, The 47, set right by the river, and walk down to the pier to experience the ebb and flow of history at your feet.

For a culinary adventure

The hotel’s four restaurants cover a gamut of cuisines. Laledan, in the gardens of Çirağan Palace, serves over 300 dishes, while at Tuğra, in the historic building, Executive Chef Sezai Erdogan serves Ottoman and Turkish dishes inspired by recipes from the archives of historic sites such as Topkapi Palace. The Bosphorus Grill serves seafood right by the river, while the chic bars Le Fumoir and The 47 are ideal for an aperitif or nightcap.

…sign up for the Sultan’s Dinner. Hosted in a dining hall in the original palace, the experience is by far the most indulgent one you could have. Recreating a royal meal in a setting that is reminiscent of how sultans dined, the menu consists of recipes that have a rich legacy and unique story. Antique candelabras, jardinière, carafes from 19th-century, gold-lined plates, and imperial silver coffee set with the monogram of one of the Sultans of Ottoman Empire are some of the highlights of this enchanting experience that marked by a multi-course meal. Most of all, you’ll be blown away by the delicacy of flavours that appealed to the kings.

For the best of recuperation

How can you go to Turkey and not step into a Turkish bath? Tiled and heated hammams are the age-old recuperation hotspots and the hotel’s Sanitas Spa has one, along with treatment rooms offering Thai, Ayurvedic, and Balinese massages. Book yourself a session – I picked the Pasha Treatment – and step into the mosaic-ed, heated space. One of the hammam’s more popular therapies, it has a expert first cleansing you with a textured mitt, and then covering you with fragrant soapsuds, which cleanses and revitalises the body. The resulting feeling of being cocooned in relaxation and well-being is one you wouldn’t have experienced.

Step into the hotel foyer and turn left, and you’ll encounter two walls filled top to nearly bottom with celebrity images. It’s an insight into the kind of patronage the Ciragan Palace Kempinski Istanbul has enjoyed over the past decade. John F Kennedy Jr., Sophia Loren, Robert De Niro, Kofi Annan, Naomi Campbell, Jean Paul Gaultier, Sting, and U2, are few of the names that have walked its hallways.

Affinity to the Ortakoy

Step out of the hotel and just a kilometre away is the buzzing Orkatoy neighbourhood. A fishing village during the Ottoman period, today it is filled with cafes, bars, restaurants, and stores, making it one of the most lively areas in the European sector. Within a triangle of a mosque, church, and a synagogue, it is also representative of the Turkey’s secularism. Step out late in the evening to witness a buzzing nightlife filled with street performances, food and lively banters with locals.

All hotels images: Courtesy The Leading Hotels of the World

Istanbul leading hotels of the World The Matrix 4 Horoscope of the Week Tarot Reading Weekly Tarot Reading 2020 Louboutin Happyrui Spikes
Preetika Mathew
Editor
Mathew has been a part of the luxury industry for over a decade now, writing on arts & culture, style, and watches for some of the leading publications in the country. When not working, she spends time tracking counter-culture trends.
Watches Style Arts Culture
Sign up for our newsletters to have the latest stories delivered straight to your inbox every week.

Time-travel to ancient Uçhisar, Turkey at Argos in Cappadocia

How do hotels get their star ratings?