Home > Travel > First person: This couple give us tips on how to travel the world on a vegetarian diet 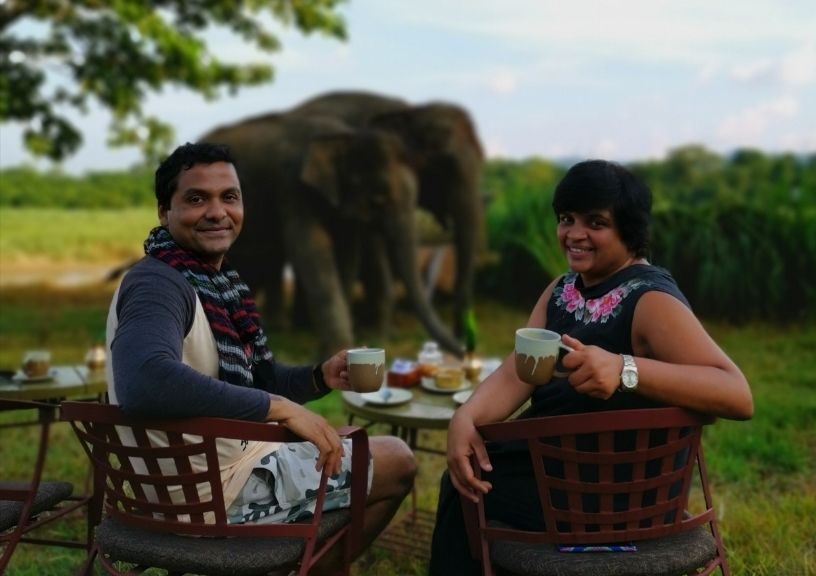 First person: This couple give us tips on how to travel the world on a vegetarian diet

Here is how they did it:

1. What inspired you to take up the mammoth world-tour mission?

Actually, our travels didn’t start off with any kind of goal or mission. Rather, it started off as a simple desire to explore a foreign land. In fact, I didn’t even possess a passport until I was 25! It started when I had to relocate for a new job on my first international trip to America from India. That was also the first flight of my life! I was petrified during the first few legs of the trip. But now, thousands of flights later, sitting on a cramped airline seat with a glass of wine and listening to my favourite Spotify playlist gives me such joy.

Since then, I have been fascinated by the alluring feeling of embarking on a trip to a foreign land: unfamiliar cultures, exotic languages that sound like music to untrained ears, surreal landscapes, new cuisines to try, new places and bars, and majestic monuments that can make you forget all your worries. This fuelled us to keep travelling and exploring—a constant craving for that stimulating unfamiliarity of a foreign land, and the unpredictable adventure that it beckons. Eventually, visiting every country in the world was a side effect of satiating this constantly burning desire.

2. As globetrotters, has language ever been a hurdle for you in any country and how did you overcome this? 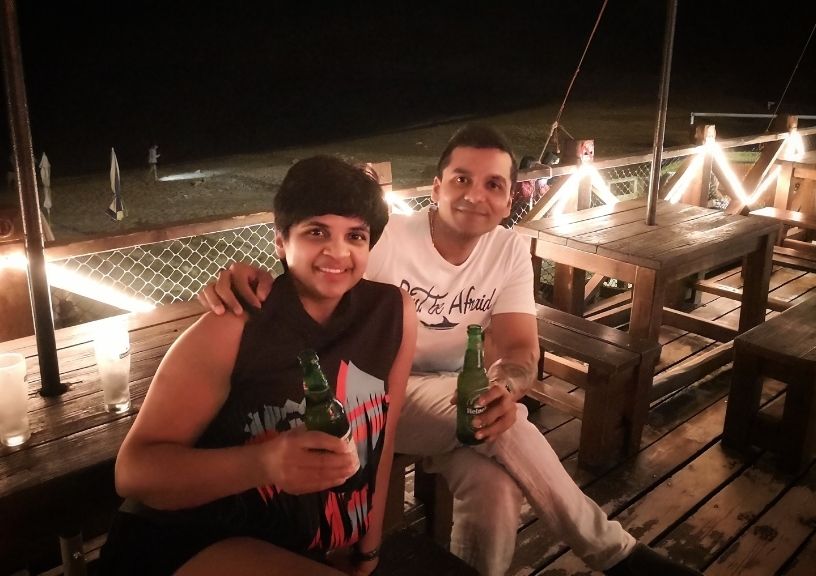 Not as much. In the early 2000s, when we started travelling, we would face a few hurdles. But now, given all the technological evolutions and tools available to travellers, it’s no longer an issue. There is always Google Translate or an app available to download that you can tap into. Nonetheless, there are still parts of Eastern Europe or rural destinations around the globe where not being fluent with the local language was a hurdle. Off-the-beaten tracks tend to be more daunting. However, that is the whole charm of travelling, right?

That being said, we’ve had some fun stories on the road because of language, especially when there weren’t many tools available. For example, we had a funny incident a long time ago in Buenos Aires. We visited a restaurant specifically to try out Argentina’s famed asado (grilled meat). And I wanted to clarify to the waiter that my wife, Sangeetha, is a vegetarian and that she doesn’t eat meat. The waiter replied, “si, sin moo, sin baa,” while making animal noises! Everyone around looked at us until a neighbouring guest took pity and helped us place the order.

3. As your wife is a strict vegetarian, how do you overcome diet-related challenges, especially in meat-loving nations? 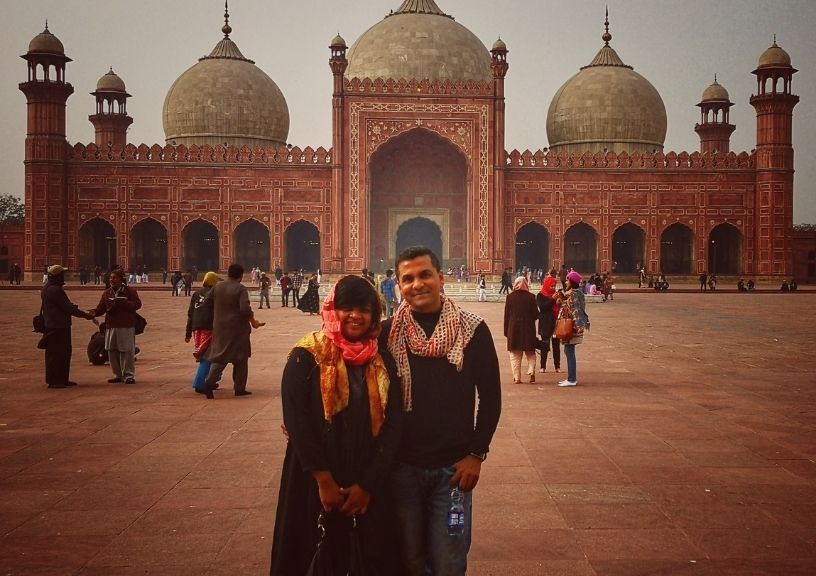 Typically, we research a lot on vegetarian alternatives before arriving at the destination. This could be reading blogs and sites like Happy Cow, visiting restaurant sites, or searching on Google. However, more often than not, such sites suggest organic, vegan restaurants; international restaurants where you can get salads, sandwiches, soups; or Indian joints. We love and prefer an immersive local experience. So, we look for places that serve local vegetarian dishes.

We also hunt and save recipes of vegetarian dishes specific to the country we travel to. This aids us in giving suggestions to the restaurant staff on what they could prepare for us. Example, beef rendang is very popular in Malaysia, but we came across a recipe for potato rendang and suggested it to the chef.

Apps also help us. We use Google Translate and even download offline languages, to type in our requirements, save the phrases as ‘favourites’, and use it to converse with the staff. I have learned how to say, “my wife is a vegetarian and doesn’t eat X, Y, and/or Z” in many languages. Thanks to many dietary fads and an obsession with eating healthier, countries have started adopting vegetarian options into their traditional menus. For example, in 2000, travelling to a place like Japan or Spain as a vegetarian was a nightmare. But now, that is not the case. Now you have more than a few options that cater to diners who don’t eat any kind of meat or seafood.

4. The two of you try to sample beer in every country you visit. Which are some of the most unique variations you’ve had? 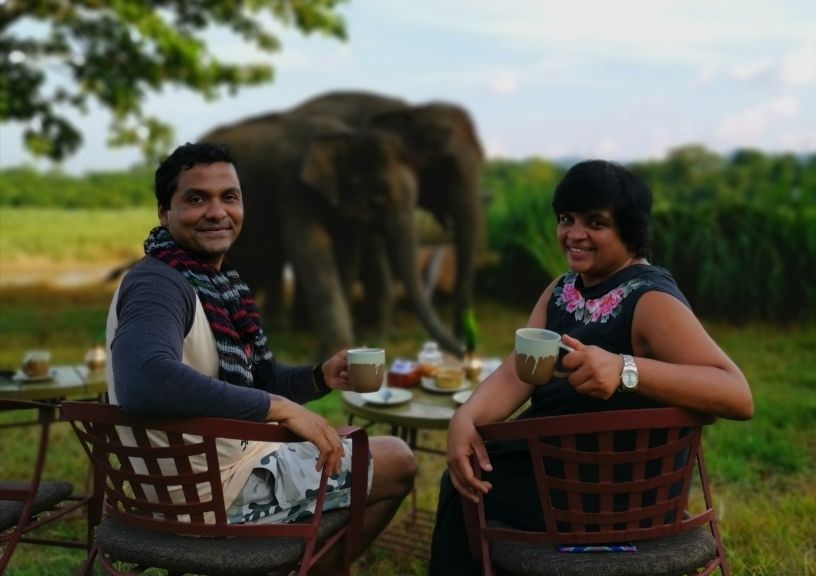 While we like all kinds of beer, we typically prefer the more flavourful and hoppy ales compared to lighter lagers. Our favourite breweries are mostly in the United States. However, since the world is going through a Craft Beer Revolution, most countries are evolving to address this new craving. While we love beers from places like America, Australia, and New Zealand—which have taken the lead in the Craft Beer Revolution—the more interesting versions of beers are brewed in Asia. They have taken the initiative of blending interesting local ingredients into the brews. For example, Jim and Dad’s Brewing Company in Taiwan brews a wicked ale with a locally-grown kumquat. Pasteur Street Brewing Co. in Vietnam whips a killer jasmine IPA. Some breweries in Philippines and Thailand cook up a refreshing mango wheat beer that is perfect for the countries’ tropical weather.

5. How do you narrow down on your next destination? 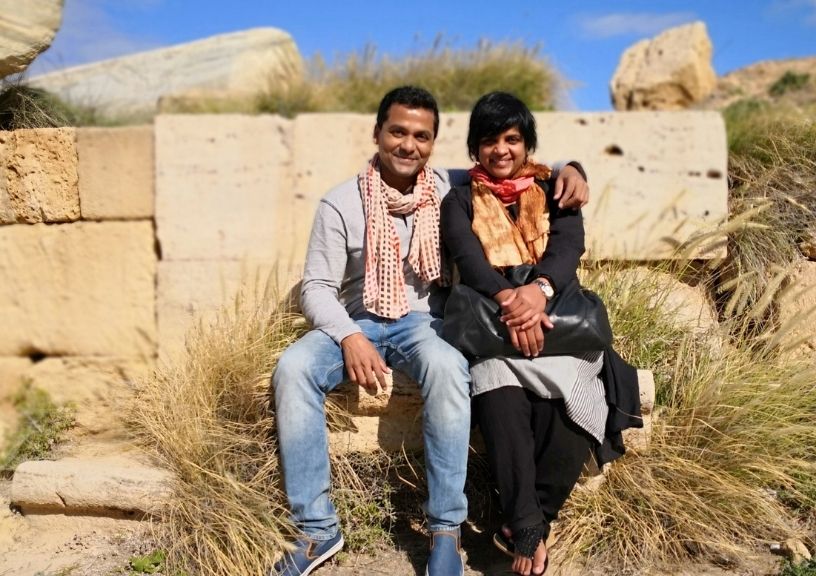 The process of researching and planning our travels has come a long way since we first started travelling around two decades ago. We relied on old-school channels and media outlets, including—but not limited to—scouring through hundreds of current and old issues of multiple travel magazines like Travel + Leisure; picking and choosing from travel guide-books over weekend coffee sessions; spending hours at public libraries; and watching travel shows on TV. Although planning was multi-layered earlier, it wasn’t a chore. Now you have destination apps, an exhaustive array of online sites and influencer sites to go through.

With regards to choosing the next destination, we pick from bucket list that has gradually built up over a course of time. The inputs of this bucket list comes from a variety of sources: articles and write-ups featured in interesting magazines like Travel + Leisure, movies that feature some stunning locations and sometimes even from social media posts.

6. What are some of the relatively lesser-known destinations you’ve come across during your travels? 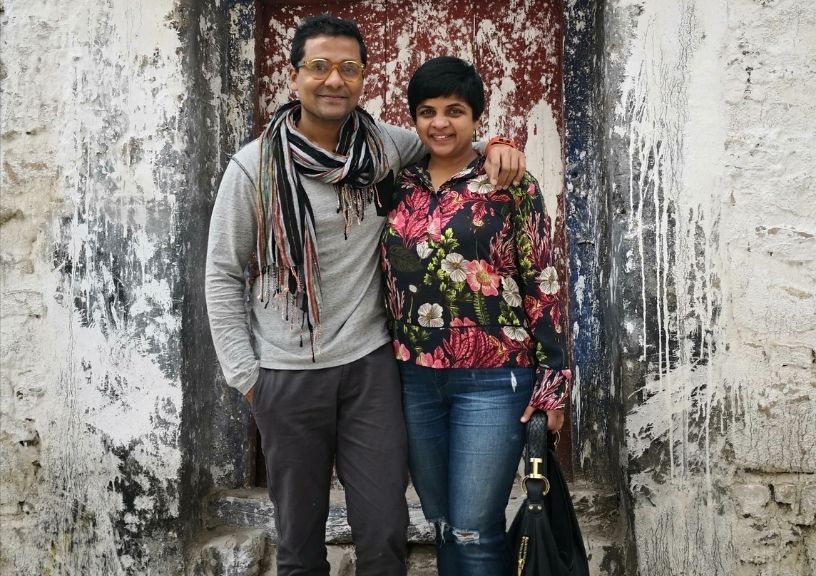 Some of my favourite destinations are actually way off-the-beaten-track that a lot of folks cannot even place them on the map!

7. Tell us about a lesser-known cuisine or dish you’ve tried and wish the world knew more about. 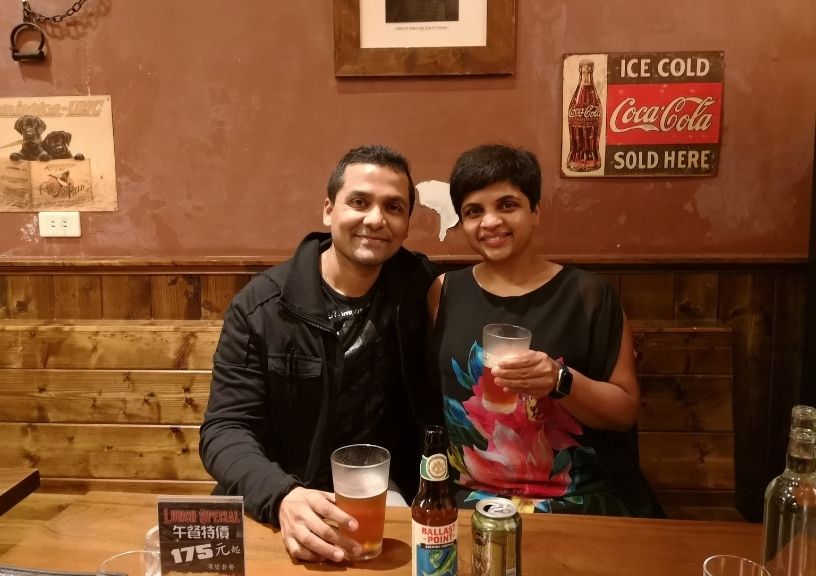 While a lot of travellers visit Tunisia for its beaches, ruins, unique landscapes, not many people are aware of its most wonderful treasure: the lablabi! The dish is a hearty, piping hot, spicy bread with chickpea soup that tickles all your taste buds and warms your insides! It is served only during breakfast and found on the streets of old Tunis. Watching it being prepared is a sight in itself. It begins by tearing and crumbling bread into a bowl, followed by adding boiling hot salted chickpea and chickpea broth and then topping it with garlic, cumin, harissa, olive oil, salt and lemon juice. Finally, it’s all beaten together to create a bowl of heavenliness (and a happy foodie!)

Another is Ethiopia’s injera fir-fir. With humble origins of a dish created using leftover injeras (fermented sour pancakes made from teff flour), fir-fir is injeras sautéed or cooked in a sauce with a tomato base, onions, garlic, and berbere (an Ethiopian spice). It makes for a delicious breakfast, brunch and anytime-snack!

8. Which are your top favourite countries to visit? 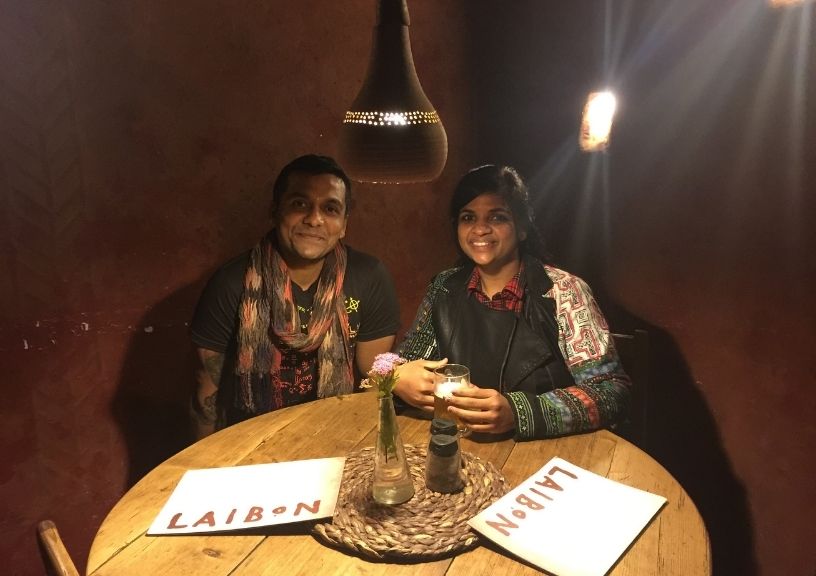 This is a very difficult question to answer, especially for someone who loves travelling and exploring every land like it’s the best. However, all countries are in different leagues in terms of heritage, culture, cuisine, hospitality, etc. For me, a list of favourites would include places which offer immense diversity around each of these factors. It should have the potential to provide a variety of nature, cuisine, culture and heritage. By that criteria, very few have this unmatchable level of diversity, of which India tops the chart. It is followed by other places like China, Italy and Mexico.

9. Any tips for couples who wish to go on #IntimateTravel vacations such as you? 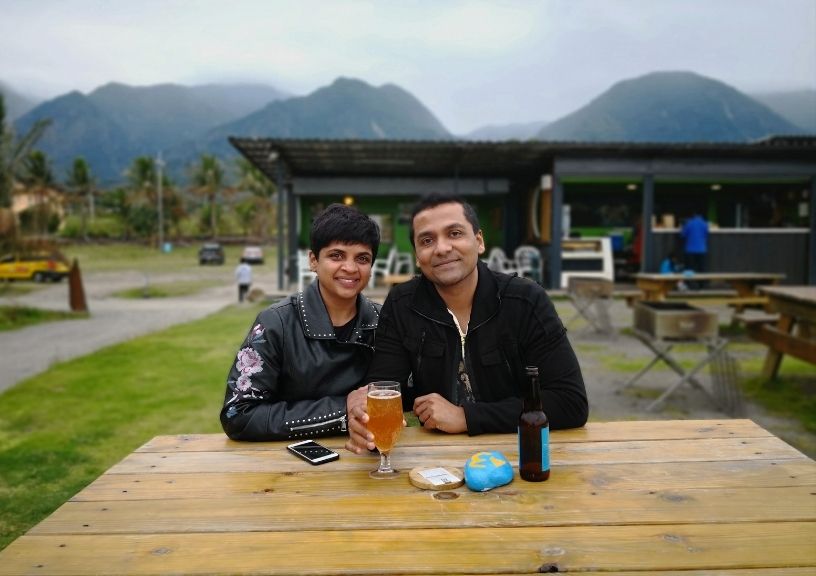 My recommendation for couples who wish to have more intimate experiences revolve around when and where they travel. I strongly recommend travelling during the off-season and to off-the-beaten paths. For example, we’ve had lovely moments in certain European destinations during winter—a season often avoided due to the cold. However, by visiting then—and if you can bear the cold—you’ll be rewarded with cosy experiences like having an entire place almost entirely to yourselves. We’ve had similar romantic sojourns in places like Montenegro and Macedonia where we travelled during peak winters.

Some of our most intimate experiences have been at destinations that aren’t on the radar for a lot of travellers like Lesotho (where we had an entire mountain lodge resort to ourselves); or Pacific islands like Tuvalu, Vanuatu, Kiribati and Federated States of Micronesia, which pack enough punch to compete with the other big hitters in the region, but without crowds. These are the kind of places where you get to fall in love with your partner all over again without the distraction or chaos of other travellers.

To prevent hassle and stress that could negatively affect the intimacy and create a more ‘us’ time:

10. How do you incorporate sustainability into your travels?

We believe we are doing our part in ensuring a sustainable world, not just in our travels, but also in overall lifestyle and living. We pride in not having kids or a vehicle. We prefer walking over driving, not wasting food, and supporting a sustainable environment.

When travelling, we reuse the towels in hotels or rooms; carry and refill our own water bottles to avoid plastic; travel light with carry-ons; do our own laundry; and choose wisely—both, in terms of quality, and quantity, during buffets. For accommodations, we opt for folks who encourage sustainable travel, such as eco-lodges. We pick establishments that train, employ and encourage locals. In this way, the place just doesn’t support the environment, but also the people and resources that belong to it.

This article was first published on Travel and Leisure. Do click here for the original story

Travel diet Destination what to eat Places to Visit Vegetarian Travel first person vegetarian travel vegetarians in Europe Indian food in Europe how to travel on a vegetarian diet
Bayar Jain
freelance writers
Sign up for our newsletters to have the latest stories delivered straight to your inbox every week.

Global Liveability Index 2022: These are the world’s best cities to live in