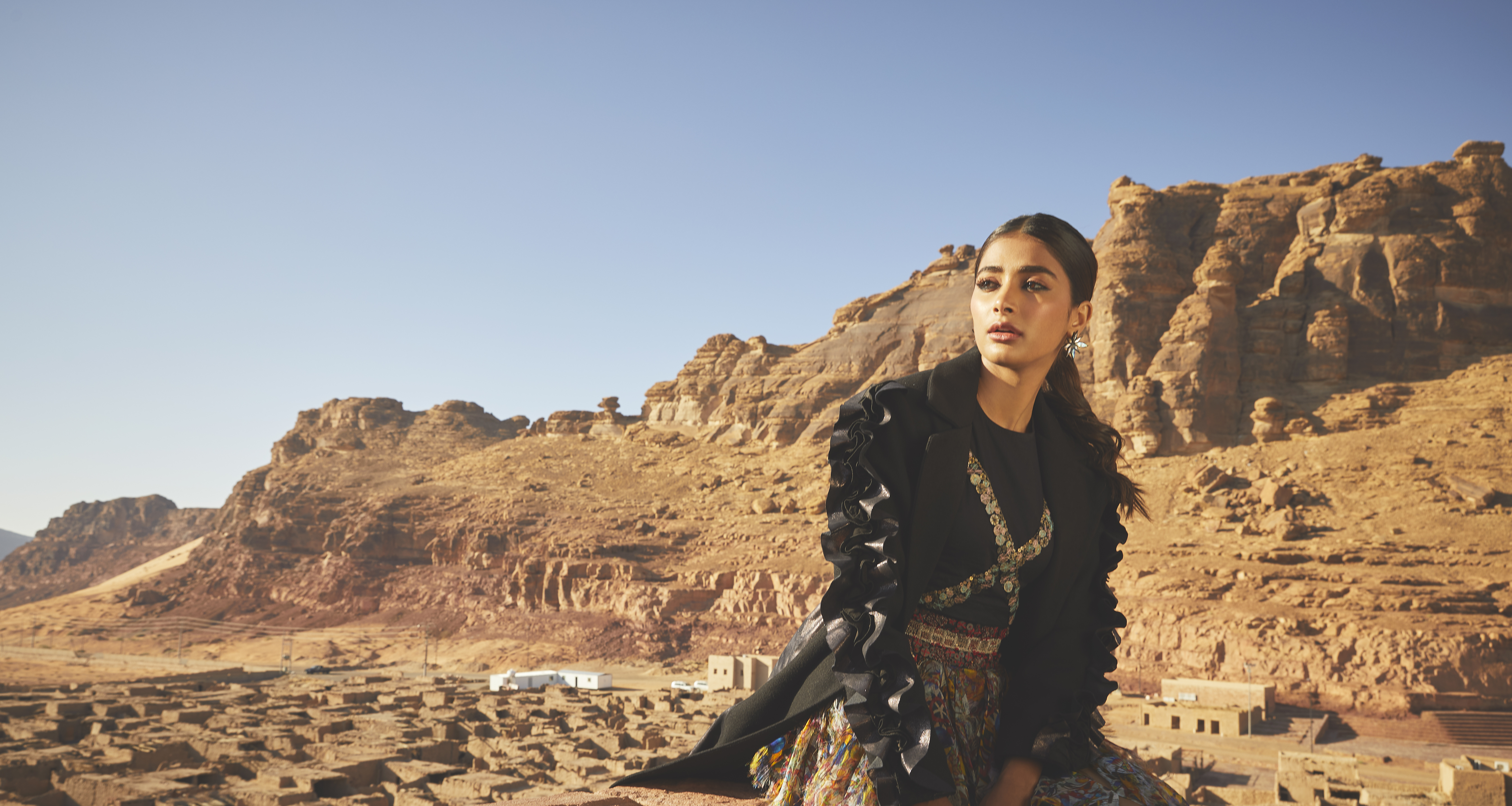 Three flights over one day. That’s all it took to land in the middle of nowhere. But when the destination is as remarkable as AlUla, the travails of travel mean nothing. Add to that the scent of landing on a fresh new airport, which is still getting its finishing touches, and you know you’ve arrived at a destination largely untouched by humanity. A convoy of five luxurious SUVs carried us into the heart of the city. As the landscape of AlUla—brimming with sandstone—took over, flight fatigue and jet lag lost all meaning.

If this article made you look up AlUla, don’t be hard on yourself. Most people hadn’t heard of it until recently. It was only in the last couple of months that the name began to appear in headlines. Many articles called it ‘Saudi Arabia’s Petra’. But it’s more than a little unfair to compare one marvel to another. It’s time to recognise AlUla for its uniqueness. But before we get to its present alluring state, it bodes well to delve into its rich, captivating history.

It was in AlUla that the ancient Dadanite and Lihyanite kingdoms thrived from the ninth century BCE to the first century BCE. An oasis in a desert valley, the walled city was blessed with fertile soil and plenty of water. It was located along the Incense Road, the network of routes that saw caravans of traders carry spices, silk, and other luxurious items through Arabia, Egypt, and India.

Though most of the original houses of the Old Town were rebuilt over the centuries, there are many remnants of traditional Arab architecture among the ruins. In fact, some old stones used in the foundations of buildings standing today have Lihyanite markings on them. The abandoned city has a religious significance as well. Muslims believe that Prophet Muhammad passed through Wadi al-Qura in AlUla—located about 380 kilometres north of the holy city of Medina—at least thrice, including on his journey to the Battle of Tabuk in 630 CE. The Old Town of AlUla was founded around the 12th century and remained inhabited until around three decades ago. They say that the last family left town in 1983, and the last mosque service was held two years later, in 1985.

Now popular for housing the archaeological site of Hegra, the first one in the kingdom to be recognised by UNESCO as a World Heritage Site, AlUla is being positioned as the crown jewel of Saudi Arabia’s tourism. Hegra was once an important trading hub for the Nabataeans; today, it is dotted with ancient ruins, tombs that date back several centuries, date farms, and sandstone boulders. This became actor Pooja Hegde’s favourite site in the ancient city (watch full video below).

Hegra is dotted with over 100 Nabataean tombs carved into gigantic rocks. “If I have a God named after a mountain, I will bury myself inside the mountain, to be closer to God.” Hamed, a young guide from the Royal Commission of AlUla (RCU), explained the theory behind the awe-inspiring structures we were looking at. The God here was Dushara.

If the deity sounds familiar, it’s probably because you’ve been to or read about Jordan. Within the temple of Al Deir, the largest and most imposing rock-cut temple in Petra is an unworked block of stone that represents one of the most revered deities of the Nabataeans—Dushara. The term Dushara (‘Lord of the Shara’) refers to the Shara mountains, which lie north of Petra. That belief in Dushara permeated AlUla too, back in the day. Today, Hegra is the largest preserved site of rock-cut tombs of the Nabataean civilisation south of Jordan.

We proceeded inside one of the rocky chambers in Hegra to observe the ancient burial site. The size of the tombs suggested the wealth of those who were buried there. Complying with our guide’s instructions, we spent no more than 10 seconds observing the surfaces, made painstakingly with hammer and chisel, their primeval simplicity being “the most beautiful detail inside the tomb.” No wonder each one took anything between nine months and two years to carve!

A 20-minute drive away from Hegra, the mountainous Jabal ‘Ikmah is another cultural treasure. Regarded as one of Saudi Arabia’s largest ‘open libraries’, it features rock inscriptions as old as 2,000 years. These writings shed light on the origins of the Arabic language, beliefs, and practices. The site is also believed to have been spiritually relevant due to its secluded location in a canyon valley, and the inscriptions being a medium of praying and giving thanks.

Across the city of AlUla, one can find hundreds of ancient inscriptions—in scripts including Safaitic, Aramaic, Thamudic, Minaic, Greek, and Latin. Inscriptions that inform specifically of the three kings of the Dadanite kingdom can be found at the site of Dadan.

A different kind of historical wealth can be found in archaeological sites such as Al-Khuraybah, once known as the legendary Dadan.

The metropolis at the centre of the Dadanite and Lihyanite kingdoms, Dadan was one of the most developed cities of the Arabian Peninsula in the first millennium BCE. It is here that King Saud University recovered colossal human-figure sculptures, which are now placed in the Louvre Museum of Paris.

Once the site of 900 houses, 400 shops, and five town squares, the Old Town of AlUla today features some preserved remnants of the original stone and mud-brick buildings. A citadel dating back to the 10th century is still accessible via a restored staircase. It might be interesting to note that this site was inhabited until very recently, and hence, offers unique opportunities to share oral histories of a fast disappearing way of life.

A chance meeting with a couple of archaeologists in the Old Town helped me understand the nuances of conserving a heritage site better. “Except the corridor that we’re standing in, nothing of the Old Town has ever been restored. It is as it was thousands of years ago.” When asked about the factors such sites need to be protected from, I was told, “sun, sand, and weather.” As it turns out, there’s nothing more powerful than nature.

The city’s most iconic landmark, or should I say ’grammable one, Elephant Rock is a natural formation that looks like an elephant with a long trunk. It lies 11 kilometres northeast of the province, at a height of 52 metres. It is surrounded by hundreds of other rock monoliths. If you are creative enough, feel free to lend your own nicknames to some of these and find them on your next visit.

AlUla’s rich history comes alive in a mesmerising series of events at Winter at Tantora, an annual festival that will run each weekend from December 19, 2019 until March 7, 2020. The ancient cities of Hegra and Dadan boast activities inspired by the knowledge of how ancient civilisations lived. The desert offers a cultural oasis as well, with a variety of performances and immersive experiences. Enjoy weekly concerts, a sculpture garden, multiple art exhibits, and an open market featuring local arts and crafts. Bathing in a Lihyanite basin recreated using the same techniques that went into making the ancient basins found at Dadan, is another unique experience found at the festival. Other attractions include luxurious boutiques and pop-ups, amid surreal surroundings.

During Winter at Tantora, AlUla also unveils its adventurous side. You can hike diverse nature trails and tour an ancient volcano that serves up a chiaroscuro of hot lava. One can enjoy vintage aircraft flights, or take a helicopter tour over the Red Sea to see virtually unexplored areas of Saudi Arabia. Soar on a hot-air balloon over sand- swept landscapes, and watch one of the most-exciting horse-races in the world. If you love to explore the outdoors, AlUla is a playground unlike any other.

On her maiden trip to Saudi Arabia, Pooja Hegde couldn’t help but marvel at the overwhelming beauty of AlUla’s virgin landscape. If she had to put it in one word, she’d call it “magnificent” but Hegde let us in on more than that.

What were your initial thoughts about a trip to Saudi Arabia?

Honestly, I first thought: What’s there to see? But when the T+L team sent me the reference pictures, I was stunned, and couldn’t wait to shoot there.

Modern cities or destinations rich in heritage: what is your cup of tea?

Both. London and New York are my favourite cities in the world. But I also have immense respect and admiration for heritage sites like this one [AlUla]. It is wise to realise the significance of such places and be a little sensitive about what they have to offer.

What do you think of emerging offbeat destinations like AlUla?

Had I not come here, I wouldn’t h­ve known what I’m missing out on. But now, I must say that those who haven’t been here yet are missing out on something extraordinarily beautiful. If it is in favour of the locals’ sentiments, then why not promote tourism in such destinations? I’m glad that the government is doing it.

If you had to put AlUla in the same bucket as some other destinations, which would they be?

Utah would be one; it’s similar. The landscape is just as dramatic, but the vibe is different. The good thing about this [AlUla] is that it’s only six hours away, and America, of course, requires 24 hours. Then there’s Istanbul. Just like AlUla, it took my breath away and is more beautiful than expected.

I want to hold a panda! It’s like my spirit animal.

What kind of a traveller are you?

I’m quite adventurous when it comes to my trips. And I like to plan every second of my holiday. Anyone travelling with me ends up exhausted, because I go far and wide to explore, and make the most out of the place.

What is the most offbeat location that you’ve been to?

AlUla! It wasn’t on my list, which is why I have found it all the more surprising.

What is your earliest travel memory?

Travelling from Mumbai to Mangaluru regularly to visit our relatives, in a red Maruti car.

What is it that you love most about travelling?

It is the fact that we live in our own little shells and travelling opens you up like nothing else.

Things you do not travel without?

A battery backup! Everything else is figureoutable.

The Saudi Arabian capital, Riyadh, is well connected to major Indian metros by multiple airlines. Domestic flights from Riyadh get you to AlUla in two hours. Get more information, here

With only a handful of resorts available at present, Resort Shaden is your best bet. It is a new luxury resort that features traditional Bedouin-style rooms surrounded by AlUla’s quintessential topography—gigantic rocks and boulders. Visit shaden-resort.hotels-saudiarabia.com

From Hegra to Elephant Rock, Jabal ‘Ikmah, Dadan, Old Town, Al-Qurh, and Al-Aqra, every corner in AlUla has a unique slice of history to offer. But don’t let the guidebooks restrict you; in a destination that’s largely unexplored, the world is your oyster, as they say.

10 stunning boutique hotels and homestays a short distance from Chennai

The next big travel trend: Circadian travel and sleep retreats