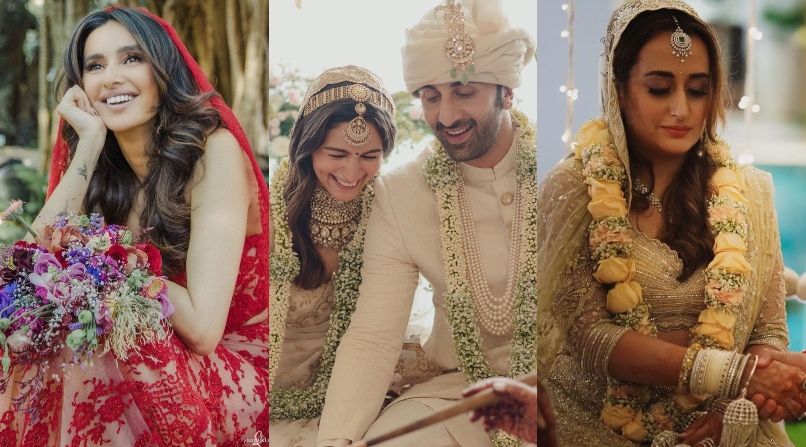 Not tied in a bun but let down freely. This is the look contemporary brides are sporting on their wedding day now. From Alia Bhatt to Shibani Dandekar Akhtar, modern Bollywood brides are letting their hair down and ditching the traditional bun this season.

6 Bollywood brides who sported open hair on their wedding

Giving a traditional twist to the bohemian bride was Alia Bhatt, who recently tied the knot with her beau Ranbir Kapoor. On her wedding day, she chose a wavy hair look that she decorated with a matta patti. Her hair further complemented her overall unorthodox ivory-gold Sabyasachi sari.

Shibani Dandekar got married to actor-filmmaker Farhan Akhtar on February 19. As soon as the couple shared their inside pictures from the wedding, people went gaga over Shibani’s open hair look. The actress and model went offbeat with her hairdo and decided to leave her locks down for her big day. She was praised for her choice of outfit, which featured a red veil.

Another Bollywood bride to bid adieu to the traditional bun is Ankita Lokhande. Although she did tie her hair while wearing her wedding lehenga, the actress left her hair open and flowy while performing all the pre-wedding rituals. She shared a bunch of pictures of her nuptials with her husband, Vicky Jain, on her official social media handle.

Varun Dhawan and Natasha Dalal tied the knot in January last year. And this Bollywood bride was among the first to sport open hair on her wedding day. Flaunting a lavender lehenga for the nuptials, Natasha Dalal looked breathtaking on her D day. She is a fashion designer who specialises in bridal couture. All thanks to her skills, her fashion house ‘Natasha Dalal Label’ added a perfect blend of contemporary and traditional wear to her wedding.

Paying homage to her Christian roots, Katrina Kaif opted for a blush pink Sabyasachi sari with a long veil. Her outfit was embellished with hand-designed embroidery and gorgeous prints. She teamed her look with English flowers, heavy jewellery, open hair and minimal makeup. For the unversed, more than 40 artisans from West Bengal were behind creating this beautiful drape.

Sonam Kapoor’s sister Rhea Kapoor got hitched to her long term beau Karan Boolani in an intimate wedding during the lockdown. The film producer said ‘I do’ to her fiance at father Anil Kapoor’s Mumbai residence. Keeping the low-key ceremony in mind, she opted for a minimalistic yet classy bridal look. Kapoor left her hair open under a beautiful pearl veil with bold eye makeup.

indian celebrity weddings celebrity weddings alia bhatt wedding Katrina Kaif Bollywood celebrity wedding Celebrity wedding
Sanyukta Baijal
Apart from scrunched up paper with recycled aspirations, Sanyukta is also a writer. When not reading or scribbling, she loves playing copious amounts of video games and watch tons of films.
Sign up for our newsletters to have the latest stories delivered straight to your inbox every week.

Bridezilla or bridechilla? What kind of bride you’ll be, according to your zodiac sign