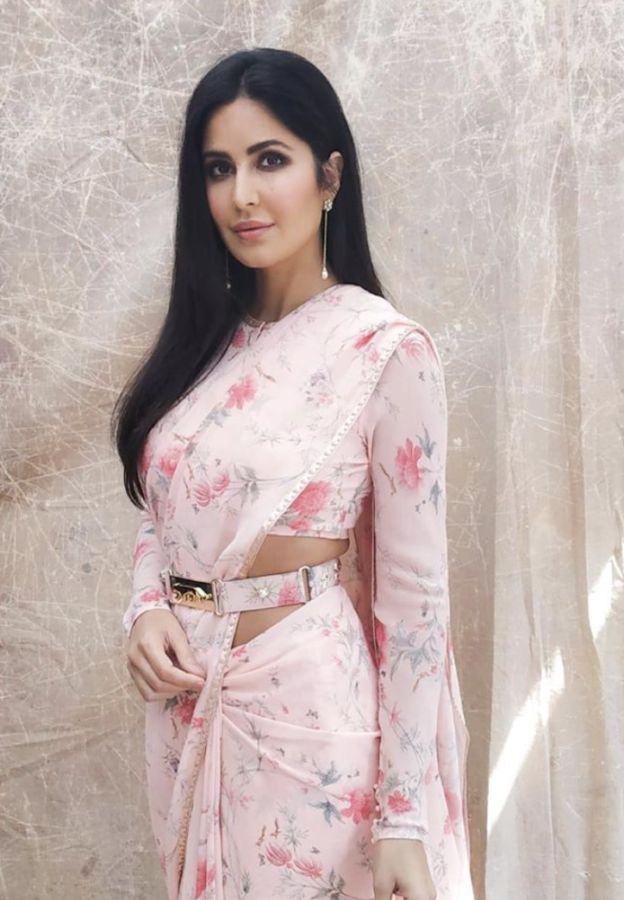 Belted sari trend has been a rage for a while. We round up the best of celebrity looks for  your inspiration board.

The quintessential Indian sari has always been tied to tradition. Several iterations of handloom finery have come to define Indian fashion. However, it’s safe to say that there is something about saris that resonate with weddings. Thanks to designers Anamika Khanna, Tarun Tahiliani and now Masaba Gupta, saris have been reimagined in a new light. Think of pre-drapped versions or Amit Aggarwal’s uber-cool saris that double as gowns, brides and her friends have an easy way out. Just in case you want to veer away from the run-of-the-mill lehengas, the good old fashioned sari can be looped in a variety of ways.

The hautest trend making it to the red carpet and star studded weddings is the belted sari. Yes, just pair the kind of belt you prefer with your traditional drape and you are good to go. Needless to say, some of Bollywood’s loved celebs have a made strong case for the belted sari trend.

If you are planning to splurge on a lehenga or an anarkali for your friend’s mehendi, give the sari a twist. Katrina Kaif in this peach Anamika Khanna sari is giving us major cues. A light cape with scalloped borders and an ethnic belt seems to pull the look together. What’s not to love? Case in point being you can do so much with several renditions of ethnic belts available in the market. Invest in the one’s featuring intricate embroideries and mirror work. They are extremely versatile and can be paired with any colour or texture.

Even though white or cream might fall in the category of unorthodox hues for a wedding, we say give it a try. Nushrat Barucha’s half sari with a traditional embroidered belt makes for a winning look.

Statement buckles are here to stay. Whether you are power suit donning executive or a sari wearing traditionalist, let the labels speak with the help of buckles. Bollywood has shown immense love for the Sabyasachi belts featuring his royal Bengal Tiger logo. Sabyasachi’s green ruffled iteration with his belt on Alia Bhatt makes for a engagement look.

Priyanka Chopra also wore a belted sari when she went with a desi girl look in the pages of Instyle Magazine.

You don’t really have to be walking down the Cannes red carpet like Kangana Ranaut to wear a corset belt with a sari. Opt for traditional drapes and let a big corset belt make a statement. Case in point being Rhea Kapoor’s Rheson sari featuring a retro take on Indian miniature paintings. What we love about the look is the stark pairing of the corset belt that helps elevate the look.

One of the safest options to start experimenting is through sleek belts. Keep it simple and subtle. We love the way Shilpa Shetty is sporting this belt with her Ridhi Mehra sari. The look is giving major mehendi vibes. Also, Karishma Kapoor in yellow floral sari with a sleek white belt is easing it down.

Not-so-basic black belts are a hot trend. The idea is to veer away from your regular leather belts and invest in delicate fabric belts with beautiful hand embroidery or super-sleek pieces that can pull the entire look together. Schooling us on the same are Katrina Kaif in this fit for a pre-wedding cocktail Sabyasachi ensemble and Sonam Kapoor in her lace Shehla Khan sari.

You can never have too much bling. Making for a perfect reception look is Isha Ambani’s Abu Jani & Sandeep Khosla ensemble. We suggest, go minimal with looks and loop in a bejewelled belt for the night.

Bridal buys: Six designer kalira labels to shop from in 2020

What’s new in bridal lehengas? We picked out 12 unique trends

#LSADecorTrend: 12 cool new ways to use Disco Balls at weddings