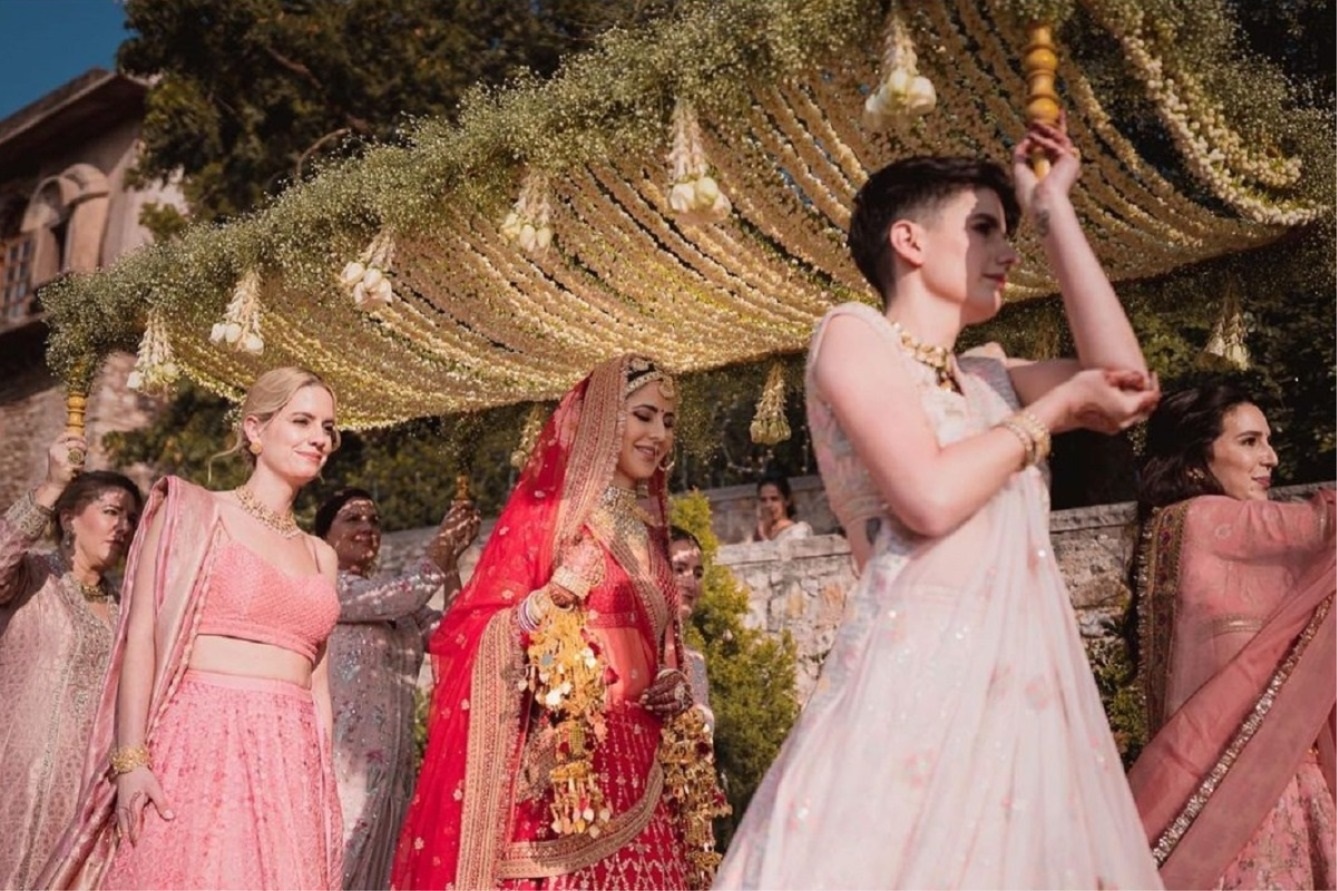 5 celebrities who broke the stereotypes of a traditional wedding

When we talk about a big fat Indian wedding, it is not only the pomp and show of the lavish ceremonies but also age-old customs that are performed to the tee. And when it comes to Bollywood celebrities, weddings only get grander in every other way. From exotic locations and over-the-top bridal ensembles to immaculate decorations and a close-knit affair, are what Bollywood weddings generally entail.

However, over many years, celebrity brides and grooms have tweaked the customs to move past the set norms of a traditional wedding. Sharing glimpses of their fairytale weddings on social media, they have motivated their fans to follow the lead.

From Dia Mirza and Vaibhav Rekhi choosing a female priest for their wedding to Rajkummar Rao sending social media abuzz with his sindoor ritual, here are some moments that broke the internet and inspired us all.

Katrina Kaif and Vicky Kaushal got married in the presence of their families and close friends at Rajasthan’s Fort Barwara in December 2021. The couple has been sharing dreamy pictures from their wedding ceremonies, making their fans swoon over them.

From donning gorgeous Sabyasachi outfits to adorning the otherwise rustic venue with beautiful floral arrangements, everything was seamlessly blended to make it one of the most-loved celebrity weddings. But one of the outstanding moments was Katrina’s bridal entry at the venue, with her sisters carrying the phoolon ki chadar over her head.

Phoolon ki chadar, which literally translates into ‘blanket of flowers’, is a custom where a bride enters with her brothers holding, what looks like a canopy made of flowers, over her head. It signifies that the bride has been raised with a lot of love and is protected by her brothers.

However, the pictures that Kaif shared from her wedding ceremony showed her sisters carrying the phoolon ki chadar. In the Instagram post, she wrote, “Growing up, we sisters always protected each other. They are my pillars of strength and we keep each other grounded… May it always stay that way! (sic).”

Another celebrity couple who got married in 2021 is Rajkummar Rao and Patralekhaa. After being together for 11 years, the Bollywood celebrities tied the knot in an intimate and fun-filled ceremony (their wedding pictures are proof) at The Oberoi Sukhvilas Spa Resort in Chandigarh.

However, one moment from their wedding ceremony touched the hearts of people all across the country.

The Newton actor shared a wedding video on his Instagram account where he can be seen asking Patralekhaa to apply sindoor — a vermillion mark worn by married Hindu women in the Indian subcontinent — on him as well after he did the same during their nuptials.

What seemed like a spur of the moment was a big step towards breaking the set norms of a Hindu wedding ceremony to bring in gender equality.

The rituals of a traditional Hindu wedding are usually performed by a male priest. However, that was not the case when Dia Mirza married Vaibhav Rekhi at her home. A woman priest performing the rituals was something that touched the hearts of her fans across the world.

Mirza Rekhi is the torchbearer of many things, including sustainable living, charities and spreading awareness about several issues. Adding another feather to her cap, she shattered the age-old patriarchal norms at her wedding by choosing a woman priest. Mirza Rekhi, in an Instagram post, penned a heartfelt note talking about how she got to know about the woman priest at her friend Ananya’s wedding.

It read, “The highest point for us was the Vedic ceremony conducted by a woman priest! I had never seen a woman performing a wedding ceremony until I attended my childhood friend Ananya’s wedding a few years ago. Ananya’s wedding gift to Vaibhav and me was to bring Sheela Atta who is her aunt and also a priestess, to perform the ceremony for us. She also painstakingly went through several hours of training to imbibe the essence of the scriptures so that she could assist Sheela Atta and translate the shlokas! It was such a privilege and a joy to be married this way! (sic).”

For her ‘sustainable’ and ‘no-waste’ wedding day, Mirza Rekhi chose a simple yet beautiful red handloom saree, which she can reuse. She wrote on Instagram, “The garden where I have spent every morning for the past 19 years was an absolutely magical setting and the most intimate and perfect space for our simple and soulful ceremony! We are so proud to have been able to organise a completely sustainable ceremony without plastics or any waste. The materials used for the minimal decor we went for were completely biodegradable and natural. (sic)”

The actress’s wedding rituals did not comprise kanyadaan and bidaai. Kanya and daan, in Hindi, mean ‘girl’ and ‘donation’, respectively. So, kanyadaan literally means the giving away of the daughter to the groom and is a ritual that is performed by the bride’s parents.

On the other hand, bidaai is the ceremonial farewell of the bride after nuptials are completed. It symbolises the bride leaving her maternal home to begin a new life and take on the role of a wife and a daughter-in-law.

Gul Panag’s doli on a bike

All Gul Panag knew before getting married to her long-time beau Rishi Attari in 2011 was that she wanted to have fun on her wedding day. And fun they had, making it a day that people in Chandigarh remember to date.

Panag got married in her mother’s onion-pink lehenga at a gurudwara in Chandigarh. When the doli left for their reception in a hotel nearby, it was a sight to behold.

Doli, in earlier times, was used for a palanquin or the enclosed chair that the bride would sit on to travel to her husband’s home after the wedding. Lately, the palanquin has been replaced by cars, or the sidecar of a bike in Panag’s case.

Along with her husband, Panag and some members of their families rode Royal Enfields to the venue. Since the actress feared spoiling her mother’s attire, she sat in the sidecar that took her husband an entire night to attach to the Bullet. On her anniversary, two years ago, she shared the details of the day with her followers.

“8 years and counting. I knew I wanted a wedding that was super fun, small and intimate. Had no idea how to go about it. Then when we attended Shruti Seth and Danish Aslan‘s wedding in Goa – we found our inspiration. Our primary goal was to enjoy the wedding with our loved ones. My mother was the ‘wedding planner’ and she executed our vision to perfection featuring every single custom with a fun twist!” she wrote in an Instagram post.

She added, “I wore my mother’s lehenga for the wedding and my mother in law’s for the sangeet. I’m often asked about the doli or ‘getaway vehicle ‘. The initial plan was to go on a bike. Since I was wearing my mother’s lehnga, I was afraid of getting it stuck in the wheel. So the husband found a fabricator in Nangal who made side cars and ordered one. It arrived the night before the wedding. Husband, his brother @rusty_clicks and @sherbirpanag were up all night attaching it to the bike ( it’s quite a task). We then got all our friends and family to ride Royal Enfield bikes as part of the procession that included women riders ( Simrit Kaur and my Bhoa their mother, then 65 years old) along with the Doli. This ride was definitely the highlight!”

Niyati, daughter of Taarak Mehta Ka Ooltah Chashmah actor Dilip Joshi, also broke stereotypes at her recently held traditional wedding. The actor shared beautiful images of his daughter looking like a dream in her bridal ensemble and making a bold statement at the same time. The stunner, shattering the standards of beauty that are expected of a bride on her wedding day, opted to flaunt her natural grey hair.

This step was applauded all over social media.

Other than these celebrities leading the way when it comes to shattering social norms and patriarchy, there were a few others who, in their own ways, stepped away from the traditions that have long been associated with Indian weddings.

For example, the traditional bridal attire is usually red, symbolising the colour of the bride for the longest time. However, Sultan actress Anushka Sharma broke that norm in her pale-pink Sabyasachi lehenga that she adorned with floral embroidery.

Singer Neha Kakkar and actresses Ankita Lokhande and Anushka Ranjan, among many others, were also seen wearing bridal ensembles in colours other than red.

celebrity weddings Vicky Kaushal and Katrina Kaif Traditional wedding Stereotypes Unconventional Celebrities wedding
Nishtha Grover
A travel fanatic who loves exploring new dishes and cultures only to later write about them. You will either find her reading, trying new skincare products or sleeping during her spare time. Also, loves rock music and cannot do without it.
Travel Food Entertainment Culture

In Pics: Katrina Kaif and Vicky Kaushal at their Haldi ceremony