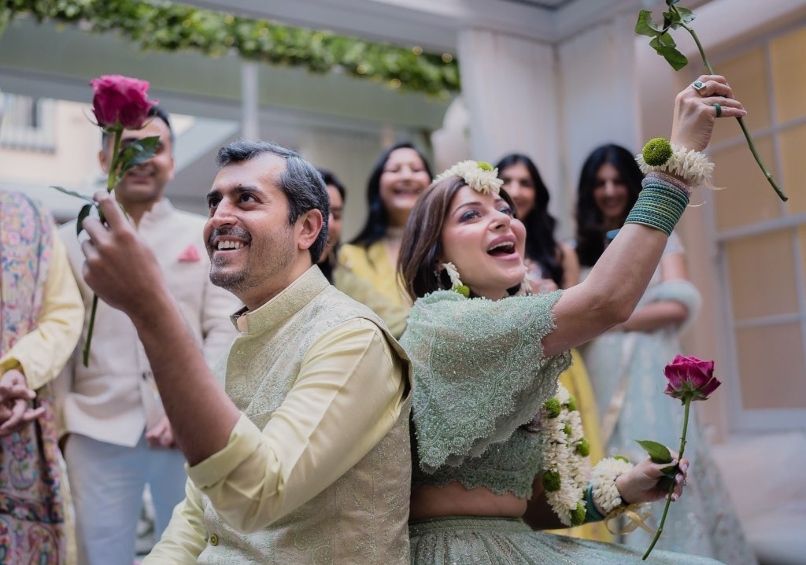 After Alia Bhatt and Ranbir Kapoor, another Bollywood celebrity who’s set to take the wedding vows is Kanika Kapoor. The popular singer is overjoyed as she is getting married to her long-term beau Gautam. Although not much is known about the groom, he is a businessman based in London and the couple has been dating for a while now.

Their pre-wedding festivities have already started and Kanika took to her official Instagram handle to share a few fun moments from her mehendi ceremony. Posting a series of photos she wrote, “G I Love you sooooo much!”

Kanika Kapoor is all smiles at her pre-wedding functions

Weddings
Bridezilla or bridechilla? What kind of bride you’ll be, according to your zodiac sign

In the pictures, Kanika is dressed in a gorgeous pastel green lehenga, teamed with a heavy emerald green neckpiece. Meanwhile, her fiancé is seen clad in an off white kurta, pyjama and a jacket.

The duo can be seen laughing, playing games and dancing together along with their close ones. Their wedding will take place on May 20.

This is the ‘Baby Doll’ singer’s second marriage. Earlier, she was married to NRI entrepreneur Raj Chandok for 14 years, who was also from London. The two decided to go their separate ways and got divorced in 2012. Raj and Kanika have three kids, daughters Aayana, Samara, and son Yuvraj.

pre-wedding indian celebrity weddings intimate celebrity weddings Bollywood celebrity wedding Celebrity wedding Kanika Kapoor
Sanyukta Baijal
Apart from scrunched up paper with recycled aspirations, Sanyukta is also a writer. When not reading or scribbling, she loves playing copious amounts of video games and watch tons of films.
Sign up for our newsletters to have the latest stories delivered straight to your inbox every week.