If you were looking for a lehenga set that covered the middle ground between traditional and modernity, the chevron lehenga might be your best bet.

A contemporary re-imagination of the OG style, this geometrical motif showcases lehengas that marry the best of both worlds. Trendsetter Sonam Kapoor Ahuja put it on the mainstream map when she wore a monochrome chevron striped lehenga and cape by Anamika Khanna for her wedding reception back in 2018 – it was unconventional and unique at best. And from then on, the focus did shift to easy, breezy, modern lehengas that modern brides are now gravitating towards. 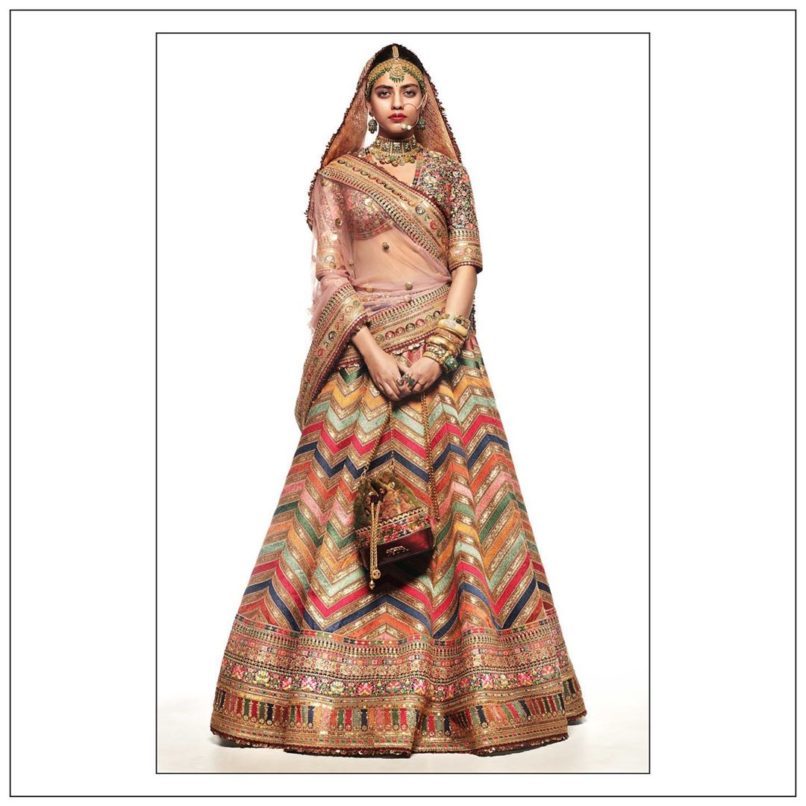 What sealed its fate as an au courant must-have was a starring role in Sabyasachi’s Summer 2020 collection. The designer used multi-coloured chevron pattis with his signature multi-strip embroidered borders on lehengas he dubbed ‘glamorous bohemian modern bridal’ looks.

It’s a pattern Payal Singhal has championed for many seasons as well; her latest rendition being tassel embroidered colour-blocked skirts.

Abhinav Mishra’s take involves candy-hued prints enhanced with his signature mirror work. The twirl-worthy end result is what Sangeet and Mehendi goals are made of.

Amit Aggarwal, on the other hand, earns his (chevron) stripes with the use of recycled and upcycled materials and fabrics. Think a variety of hues for such as bright red, blush pinks and even neon, his repository of colours  is brimming.

He goes on to dip them in neon and jewel tones for thoroughly modernized ensembles that are often seen on the likes of Ananya Panday and Kiara Advani who favour his chevron lehengas. For a touch of the old and the new, turn to Ekaya’s luscious Benarasi silks that seamlessly blend this structured pattern with flora- and fauna-inspired motifs.

Praachi Raniwala is a freelance writer and digital nomad working with multiple titles across the fashion and lifestyle industry. She holds a degree in fashion journalism from London College of Fashion, and previously worked as a senior features writer at L’Officiel India. She is curious about upcoming labels to watch out for, wellness trends and travel hotspots. You can find her words in Vogue, InStyle and Condé Nast Traveller among other publications. The writer is based in Mumbai, but her heart belongs to London.

10 trending hairstyles that are perfect for Indian brides

7 bridal designers who can upgrade your trousseau game

The most unique and coolest jaimalas we spotted at Indian weddings