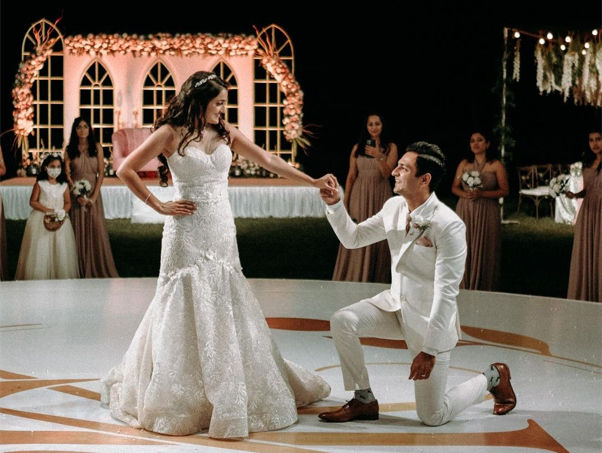 The wedding season’s on and one of the first few celebrities to get married at the beginning of this year is Kenny Sebastian. The comedian recently got hitched to his long-term girlfriend Tracy Alison in a white wedding including some ceremonies in Hindu rituals as well.

The vows took place in Goa and excited Kenny took to his official Instagram handle to break the news. He dropped a series of pictures from the celebrations where he was seen decked up in an all-white suit and his wife was seen in a gorgeous fish-cut wedding gown. Meanwhile, in another click, Kenny and his better half were spotted in Indian wears where he donned a sherwani while Tracy sported a lehenga.

Sharing the clicks on his social media, Kenny wrote, “Tracy is home ♥️…@tracealison… Just wanted to update my sweet insta followers that I have got married and it was the most memorable day of my life.”

Apart from multiple pictures, Kenny even posted a video with his gang including popular comedians Abish Mathew, Naveen Richard. The clip features him and his groomsmen shaking their heads to the music. In his caption, Kenny didn’t just give a shoutout to the boy squad but also mentioned the ones he missed at the event, including Biswa Kalyanrath.

A lot of celebrity comedians graced the event including Aakash Gupta, Prashasti Singh, Sumukhi Suresh, and more. They even shared a few glimpses of the party on their Insta handles featuring Kenny and his wife. In the clicks, the bride and groom can be seen posing, smiling and dancing together.

Meanwhile, talking about Tracy, all we know is that she is apparently a dentist. Kenny has not been vocal about dating her and kept his love life under wraps until he finally got married.

For the unversed, Kenny Sebastian is a popular name in the world of standup comedy and has been a part of many shows, including Comicstaan, Getting There, Humorously Yours, Pushpavalli, and more. Meanwhile, on the work front, the comedian will next be seen judging season 3 of Comicstaan on Amazon Prime Video.

indian celebrity weddings celebrity weddings Celebrity wedding Kenny Sebastian
Sanyukta Baijal
Apart from scrunched up paper with recycled aspirations, Sanyukta is also a writer. When not reading or scribbling, she loves playing copious amounts of video games and watch tons of films.
Sign up for our newsletters to have the latest stories delivered straight to your inbox every week.