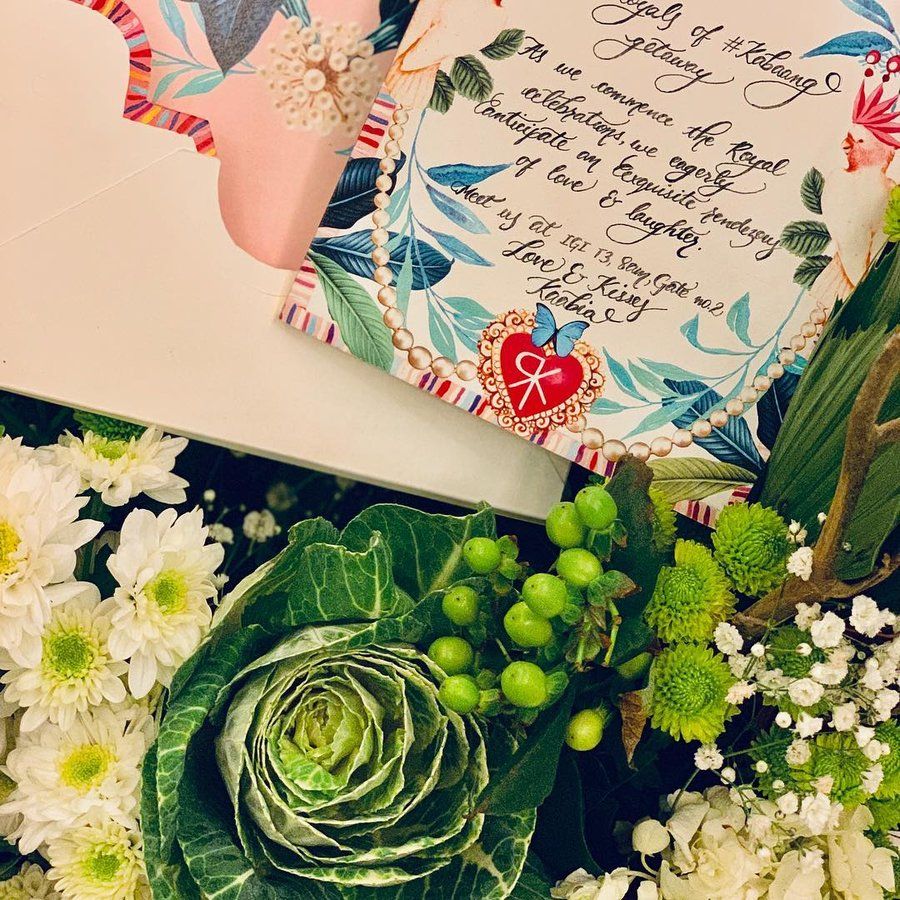 Kaabia Grewal, one half of Outhouse, the popular costume jewellery label, is getting married today at the JW Marriott Phu Quoc, Vietnam, and if her recent royal bachelorette was anything to go by, the nuptials are going to epic as well. All over Instagram, the bachelorette took place in one of the bride’s favourite cities, Bikaner, at the chic Narendra Bhawan. Beautiful and unconventional, modern yet old-world, the occasion was filled with fun ideas that were implemented to perfection. We asked Grewal to give us all the details of this fabulous getaway with her besties.

Physical invitations were designed by Emerence from Potesta Designs, keeping in mind Kaabia’s wedding destination – JW Marriott Phu Quoc. The property is magical, perfect for weddings as every nook and corner is different from the other. Kaabia tried to get this feel replicated in the invites.

The addition of pearls to the invite was to represent her true love for jewellery and her baby, Outhouse, which recently also forayed into bridal jewellery.

Each of these beautifully monogrammed, hand-written, and personalised cards were sent to ‘The Royals’ (guests), enclosed in an envelope marked with eclectic stamps.

The cards were accompanied by a beautifully curated hexagonal box of wild floral arrangements – the Fiorella team really brought Kaabia’s vision to life.

Bridesmaids / Bridesmen were hashtagged The Royals of #Kabanng. Apart from her sister Sasha Grewal, the crew included makeup artist Savleen Manchanda, the bride’s close girlpals – Neha & Divya, Britanny Uppal – and designers Shivan & Narresh, and Siddhartth Mahajan. The theme for the trip was ‘The Royals of #Kabanng’ getaway!

It was a personalised welcome at the airport where the entourage was received with giant placards emblazoned with the #Kabanng logo. It was then a ride to the hotel, followed by drinks and lunch at the hotel’s restaurant, Pearls and Chiffon.

Weddings
5 mehendi lehenga labels for the contemporary bride in 2019

And then it was time for the big surprise. Indian designer Atsu Sekhose made an appearance and announced that he would be doing the bridesmaids outfits. The girls sat with Atsu for their fittings, and brainstormed to create designs that were special, personalised, and chic.

Back in their rooms, a welcome letter detailed everyone’s itinerary. Accompanying the letters were emerald green velvet La.q.una robes alongside a luxe pyjama set, which set the tone for the festivities of the day.

At 8:00 pm, the Royal Robe Blind-folded Dinner began, with everyone dressed in their pajamas and sporting Outhouse Jewellery. The blind-folded diners kept guessing what they were eating, which was revealed only at the end of the meal.

Red and white wine was paired with each course, and dessert was a delicious portion made of lemongrass and passion fruit. Each one finished with mint tea.

The table decor was simple: A centrepiece of flowers with candles, and name cards by Fiorella. The after-party followed at The Laxmi Niwas Palace.

The day started with a late brunch, followed by a tour of the beautiful property. For the Safari Picnic, the gang drove away from the hotel by the lake and were welcomed at the Darbari, with Bikaner melodies being played on the Ravanahattha (an instrument that is considered the predecessor of the violin). Thus began an evening of revelry at Narendra Bhawan’s outdoor cocktail bar that continued until midnight. The gang sat enjoying the glistening moonlight on the lake as conversations and laughter peppered the night.

The bachelorette was all about unwinding, and appreciating the time spent with each other. Breakfast at Junagadh Fort the next day, and the royals were on their way back.

Outhouse jewellery kaabia grewal bachelorette party bachelorette party celebrity bollywood bachelorette party narendra bhavan bikaner best bachelorette party in india
Latha Sunadh
Deputy Editor
When she's not trying on a new serum, researching on yet another classic fragrance and sharing lip balms with her 5-year old daughter, Latha Sunadh keeps it reined in with a nice song and a good book. Special skills include obsessing over handmade, home-made and handcrafted luxuries.
Beauty
Sign up for our newsletters to have the latest stories delivered straight to your inbox every week.