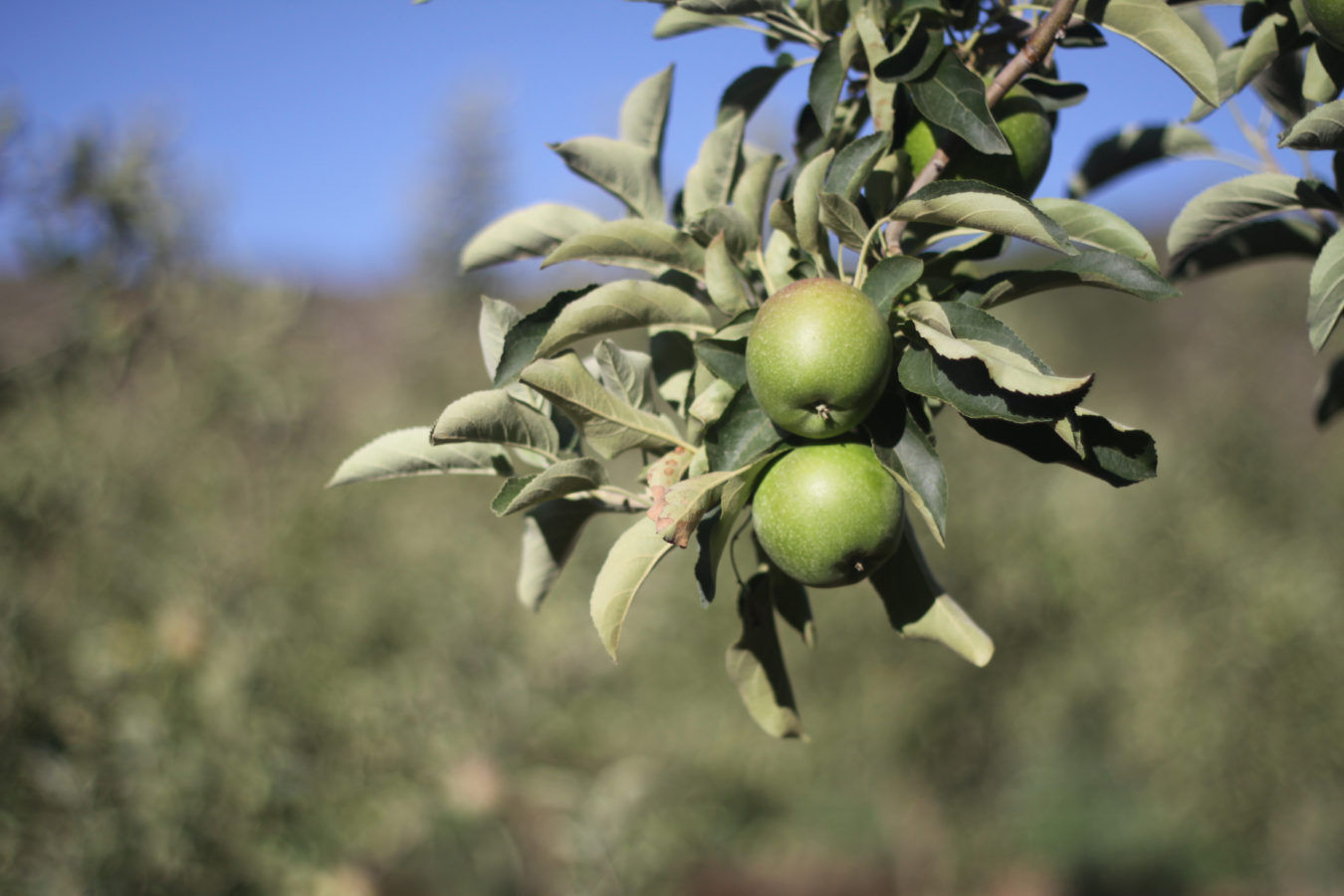 Marula is just the superfood your skin needs.

Have you ever wondered how elephants maintain such young-looking, healthy, hydrated skin? How do they protect themselves against acne, UV damage and other environmental aggressors? It’s their diet. Without knowing its proven microbial properties and that it provides ultra-effective after-sun care, elephants eat prodigious quantities of nutritious marula.

Marula is the taste of Africa. And humans are now utilising the multi-benefit superfruit in a variety of health-giving, cosmetic ways, too. Brands like Esse, Africology, and Drunk Elephant use marula oil which is anti-microbial and non-comedogenic, to keep the skin hydrated and prevent trans-epidermal water loss.

From the skin to cream liqueur, what is marula and how is the superfood used?

Indigenous to the miombo woodlands of southern Africa as well as Madagascar, the yellow plum-like fruit of the 9m-tall female “marriage tree” or “elephant tree” with grey mottled bark and wide-spreading crown is hand-picked or gathered from the ground from January to March. 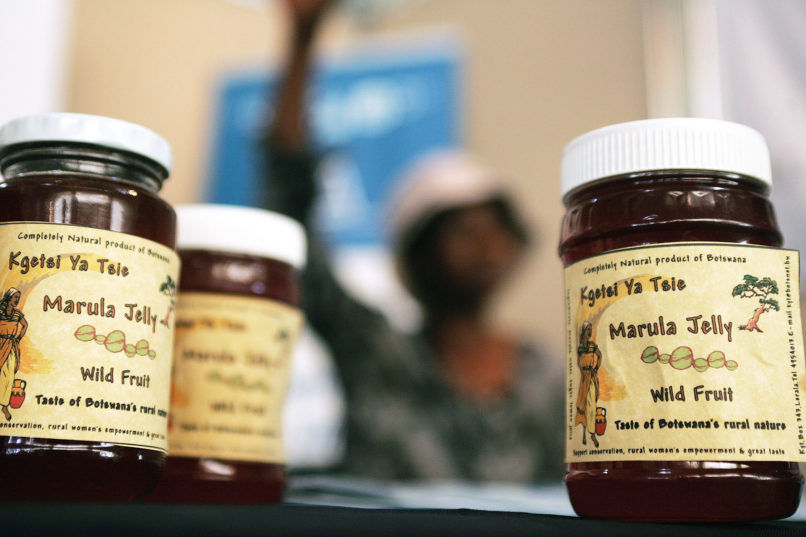 Amarula is the traditional safari game drive sundowner and preferred nightcap out in the savannah and veldt. It is the world’s second bestselling cream liqueur.

Distell released 400,000 bespoke bottles carrying the individual name of adopted elephants. One African elephant dies every 15 minutes. That’s 96 a day. Less than 400,000 now live in the wild.  Experts predict they may be extinct by 2030.

How to plant a marula tree? Well, you can’t

Called “maroela” in Afrikaans, “morula” in Sotho and Tswana, “mng’ongo” in Swahili and “umganu” in Zulu, marula has considerable socioeconomic importance. The tree is not cultivated. It is loyal to its roots. It grows where it wants to grow. Seeds often sprout from elephant dung. Elephants will travel miles on a marula superfood crawl. They can smell its ripe fruit from miles away, even hear it fall to the ground.

Marula trees are protected. In South Africa, they cannot be grown commercially. Collected from the wild by members of rural communities, the annual marula harvest provides important income to rural poor.

The Amarula Trust project exposes participants to empowering activities, such as exercise classes and training in good parenting and community counselling. They use the knowledge they acquire in these classes to help others in the community develop better coping mechanisms.

“This project is a springboard for intellectual, spiritual, physical and emotional development, which equips them with some of the resources to help stem community vulnerability to such problems as teenage pregnancy, substance abuse, illness and disease,” says Amarula’s Toni Rimell.

There is a similar project in Bushbuckridge, near Mpumalanga, at the Kruger National Park where an empowerment initiative and social uplift programme helps 42 communities. About 24,000 women collect and crack the marula nuts and receive remuneration for their work. 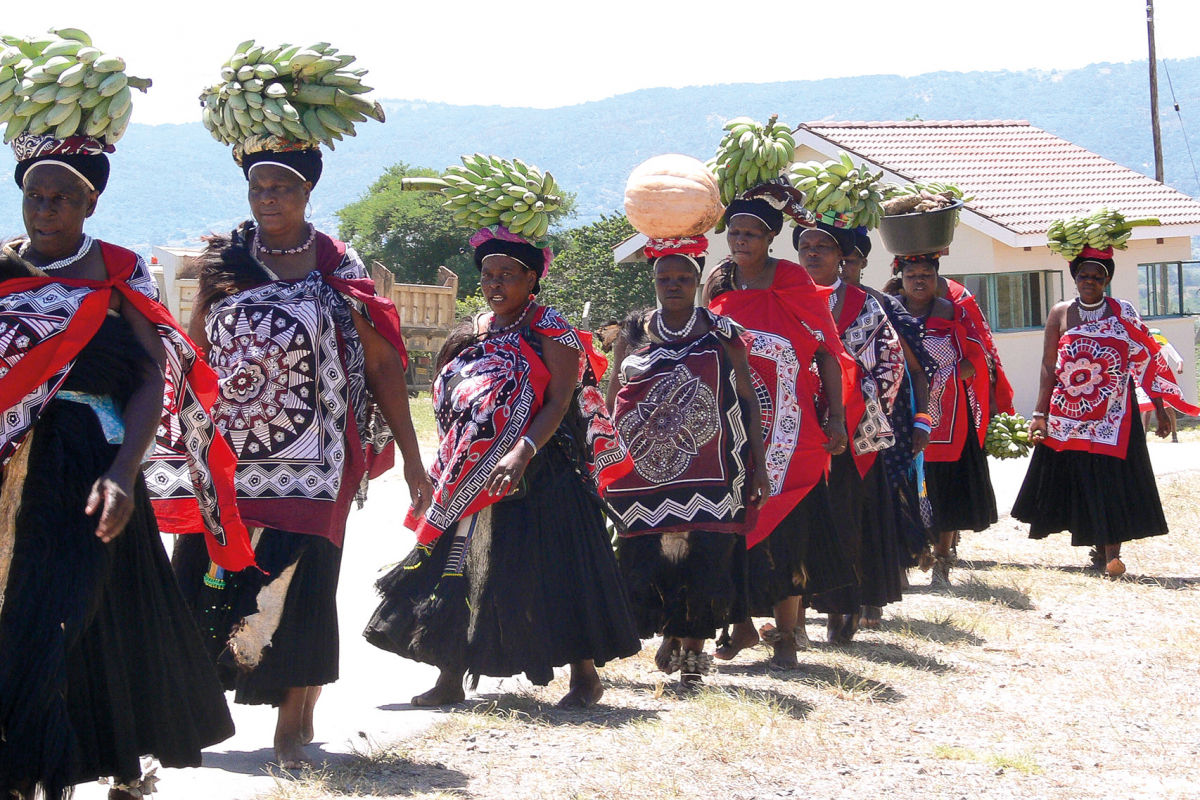 Another innovative women’s job creation project which began in Sir Lowry’s Pass Village has been extended to nearby Macassar and Nomzamo, where local women thread, knot and brush out the golden braided tassels to supply to the producers of Amarula Cream. One villager produces an average of 1,000 tassels a day.

Adds Rimell: “Even with recent  increases in cost of living, some of the women involved are able to put aside money for those needier than they are. With mentoring in how to manage their money, they have been able to achieve more. Some have even been able to pay for extensions or alterations to their family homes. This work gives them a sense of value and a reason for optimism.”

“The tassels are a small but highly effective way of enhancing the lives of the people in Sir Lowry’s Pass Village. While the trust gives extensive focus to elephant conservation, we also support enabling projects intended to help marginalised rural communities find ways to break the impact of poverty.”

Royalty presented with marula beer every once a year

Every year in Swaziland, the fruit — also known as “manganu”, “baganu”, or “emanganu” — is celebrated at the royal residence at Ebuhleni in the Hhohho region. Both King Mswati III and Indlovukazi the Queen Mother are presented with marula beer and have the first mouthful.

Women make the beer in villages, gathering at the chief’s kraal singing songs of praise known as “chembe.”  The person responsible for guarding the precious calabash is VIP for the day. The leftover marula beer, called “hongwe”, is considered too potent for women and suitable only for men with virility shortfalls. 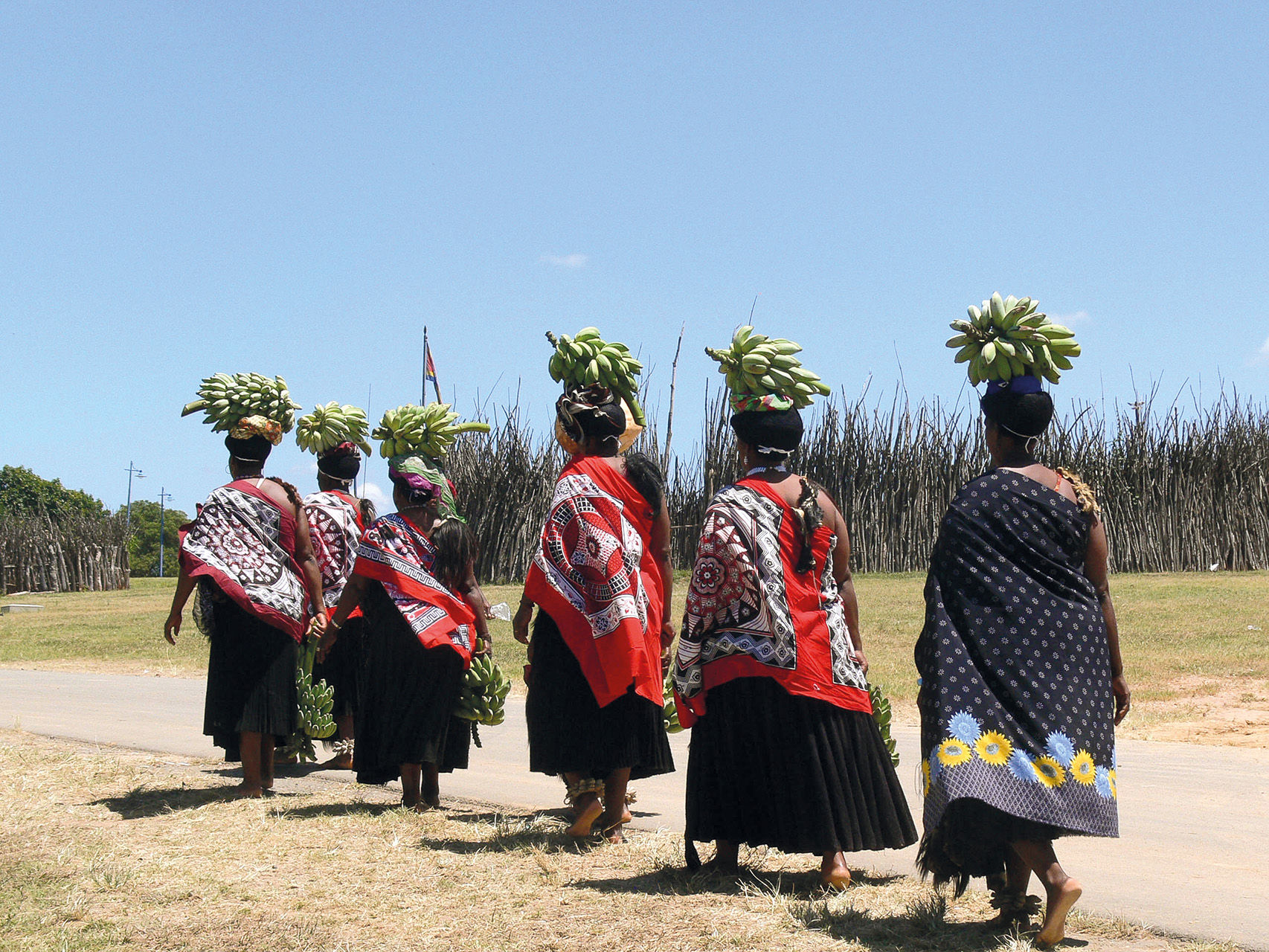 Harvests are presaged by the banishing of worms. The worms detect the fruit and therefore are a sign that the harvest can begin. During an African “First Fruits” ceremony, at a specially selected marula tree, the ritual slaughter of a goat or black bull takes place, known in Zulu as “umsebenzi”. A clay pot is offered to ancestors and spirit mediums (“izangoma”).

Swaziland’s Queen Mother also has her own job creation and poverty alleviation projects. She even has a cosmetics brand Swazi Secrets, which produces not only cold-pressed, wild-harvested marula soaps, potions and lotions but also ximenia (sour plum) and trichilia (Cape Mahogany) skincare and spa products. The production facility is near the Mkhaya and Hlane game reserves.

Sclerocarya birrea is one of the most prolific fruit-producing trees in Africa. It has an extraordinary number of uses, such as floors, tools, toys, yokes, beehives and drums. An infusion of the male or female trees’ bark is believed to help determine the sex of an unborn child. Among the Venda tribe, a woman seeking a baby boy will consume an infusion from the bark of the male tree, or the female tree if she desires a daughter.

The superfood marula is also used as a dye, fertiliser and meat preservative, as well as to treat leather. The peel supposedly has 27 different flavours. It is made into a decoction and used as purifying agent, to cleanse houses where a death has taken place. Leaves are inhaled as insect repellent. It is made into relishes, and pulverised and eaten as a porridge. Tsonga tribeswomen have long used it as a beautifying body lotion, bathing in it rather than water (a scarce resource in the land).  It is also employed as baby massage oil. 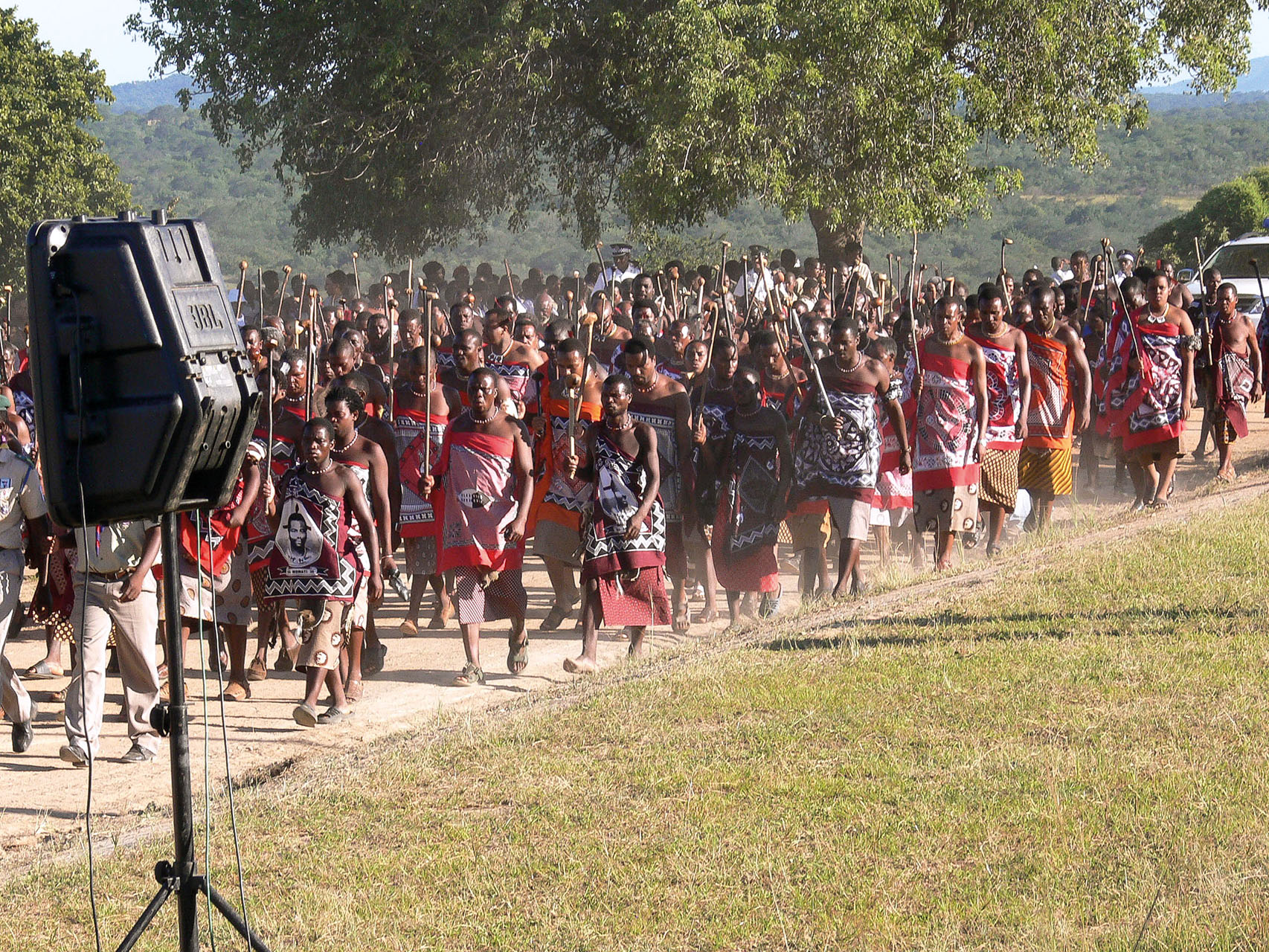 Now spas including Tau Lodge in the Madikwe reserve on the South African-Botswanan border utilise its homeopathic and aromatherapeutic properties. You can have marula body wraps and facials. Think of it as Africa’s argan oil.

Tree of life for elephants

For over a decade, the Amarula Elephant Research Programme has conducted field research and analysis as the basis for developing conservation strategies in private and public game reserves in southern Africa. It is backing a Botswana-based multidisciplinary study of how elephants and people interact outside of protected areas. It is “collaring” elephants in eastern Okavango Panhandle, to better understand herd dynamics and feeding patterns to mitigate HEC (or Human Elephant Conflict).

Although elephant populations are declining in many parts of Africa, Botswana sustains the largest contiguous, free-roaming elephant population on the continent, which is estimated at more than 200,000. Ecoexist and the Texas A&M University are involved too. Eight elephants have so far been collared, thanks largely to sales of Amarula.

The velvety smooth, milky caramel drink — best served with ice and a good view — has contributed over 6 million rands (US$615,082) to elephant conservation research. “They say elephants never forget. Now they need us to remember them,” says Kahumbu.

Good works are being sponsored by good drinks — Amarula Coladas, Fiery Bushes and Elephant Reveries  — as well as skincare products. Not only are shooters in a bar helping the elephant population, elephant conservation has joined hands with skin conservation too.

Skincare Africa Madagascar Elephants Murala Superfruit Amarula cream liqueur
Kevin Pilley
Wellness
Sign up for our newsletters to have the latest stories delivered straight to your inbox every week.

What is Cica cream? Plus, 9 best skincare products to treat those stubborn marks

Achieve a radiant complexion by including ginseng in your skincare routine