It is the eye for detail and a well-thought-through interior design that set the Four Seasons brand a class above other luxury hotels. The Four Seasons KL features high-volume ceilings and floor-to-ceiling glazings for maximum daylighting to invokes a cool sense of calmness, which permeates into the rest of the interior spaces.

The Four Seasons KL takes its dining space seriously, so much so as to bring in Ed Ng and Terrence Ngan of AB Concept, an established interior design firm based in Hong Kong. Having previously worked on the Four Seasons Hotel London at Ten Trinity Square last year, AB Concept has reinvented the space now known as Mei Ume, which features a contemporary twist to traditional Eastern influences.

Travel
A look inside the Airlander 10, the world’s largest aircraft 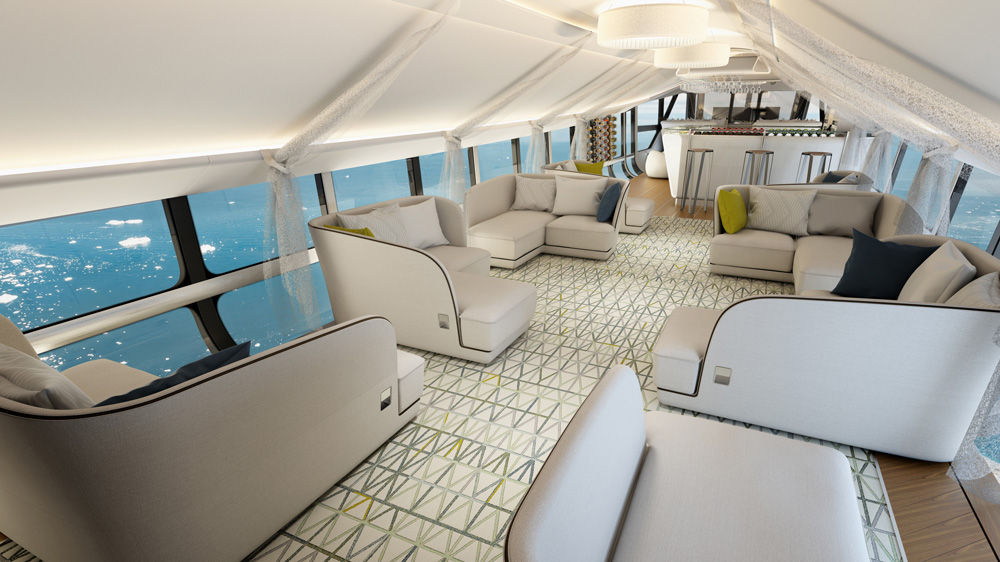 AB Concept specialises in creating bespoke designs, believing that every space should feature its own unique identity. “We wanted the space to be distinctively different. That is what we have always believed in and worked on,” shares Ed as he explains the thought process of designing not one, but three different F&B spaces within the Four Seasons KL.

These include the Lounge at Four Seasons, which Ed mentions is very open and light-hearted with a more ‘westernised’ and colonial influence. It also has a fair usage of pastel colours paired with marble countertops, as well as a wood flooring and bespoke rugs that demarcate the spaces beautifully — giving it a semblance of grandiosity.

Ed also talks about Malay architecture especially the private chambers, which highlights intricate marble and wood detailing, much like a typical colonial arrangement. As he speaks about the country as a melting pot of cultures, he says: “Malaysia is a multi-cultural country so you will see a lot of cultures weaved together, which is one idea to provide a symbol of localism.”

At the end of the lounge sits Bar Trigona. The only single access point is through a gold-gilded royal blue panelled door, giving it an air of exclusivity. Bar Trigona gives off an alluring vibe the moment you walk through its doors, playing around with the idea of East meets West — mainly Eastern culture synchronising with the Western colonial influences. The primary colour scheme is simply teal and imperial blue. The interiors also employ complementing materials traditionally used in Malaysian crafts like bronze, glass, and leather.

While the bar oozes a certain contemporary and modern outlook, Ed has found a way of maintaining the balance between two clashing cultures with a unique approach to its lighting placements. Adorned above the bar sits eight lamps, inspired from the traditional Chinese yo-yos while the walls and ceiling are covered in multiple pieces of mirror. This aims to provide a backdrop of twinkling stars when the Bar Trigona is in full effect.

Ed continues his insightful tour to the fine-dining Chinese restaurant known as Yun House. AB Concept focuses more on singularity with Yun House, ensuring that it doesn’t resemble anything like a hotel restaurant but rather, a dining space that so happens to be in a hotel. “We didn’t want to design a restaurant that feels like it’s a part of the hotel. We wanted to turn it into a unique experience, which will also attract the locals,” he explains.

The entrance to Yun House features a facade containing a huge pewter wall engraved with the bamboo, chrysanthemum, plum blossoms, and orchids, which represent the four seasons, also known as the “Four Gentlemen” in Chinese artistry. The pewter back panel is inspired by the rich tea culture history in ancient China, which goes hand-in-hand with pewter, one of Malaysia’s many exports. “Pewter is actually the best container for tea; something we find so intriguing, and it is so interesting to see how the design and materiality all come together beautifully.” Of course, the entrance wouldn’t be complete without a Chinese courtyard-style reception area with an onyx table.

Much like the Lounge at Four Seasons, Yun House features plenty of natural lighting and double-volume ceiling in the ‘a la carte’ dining room. Ed also ensures that the design language of Yun House is highly photogenic, making for great pictures on various social media platforms.

“It’s already embedded in our minds. We make sure this is the photographic moment; this is why we included many floral arrangements and centrepieces throughout the spaces,” he describes.

With the design aspects of all three spaces within the Four Seasons KL bearing contrastingly different tones, design languages, and identity, it is made clear that the Four Seasons brand has nothing but exquisite taste and a strong respect to the creative works of interior designers and architects alike.

Ed sums up: “At the end of the day, we are creating a unique experience using local contexts that translate to the comfort and joy of the users.”