Not sure about you, but 2017 has already been quite the roller coaster for us. We think it’s got to do with the celebrations being so close together — first Christmas and New Year’s Eve, then Chinese New Year and Valentine’s Day. It’s like we didn’t really have the time to flow in and out of each festive vibe properly.

Anyway, this February, we can still bask in the holiday vibes on the weekends, by doing some fun things around KL. The city is brimming with art exhibitions this month, so you can be assured of spending your weekends surrounded by good art. 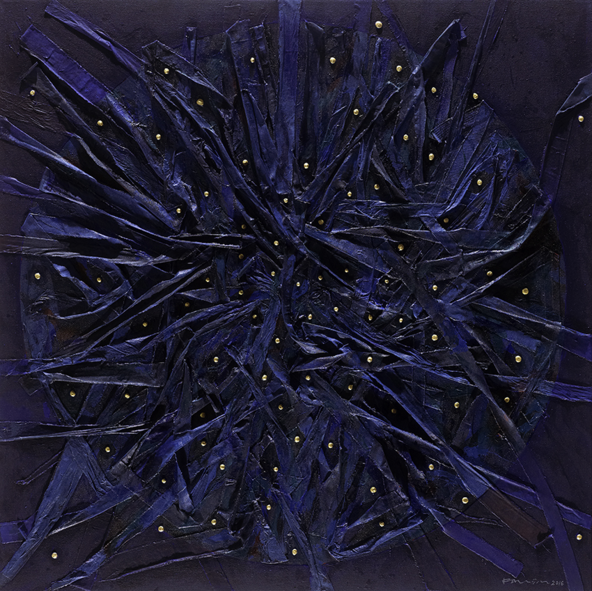 Life Between the Dots by Fauzin Mustafa

‘Life Between the Dots’ is artist Fauzin Mustafa’s third solo exhibition. His works on display are a gorgeous showcase of various hues and tones of striking monochromatic colours sitting harmoniously with gold dots — akin to capturing the infinite universe and stars within.

This exhibition is currently ongoing until 28 February 2017. The Young Talent by Azizi Latif and Sabihis Md Pandi

Organised by Curate Henry Butcher, ‘The Young Talent’ features works by promising artists Azizi Latif and Sabihis Md Pandi. Azizi was the Silver Award winner (Established Category) of the UOB Painting Of the Year 2015 (Malaysia) while Sabihis was the Bronze Award winner (Established Category) at the UOB Painting Of The Year (Malaysia) in 2014. The latter also received the Malaysian Emerging Artist Award in 2013. Azizi’s works comprise detailed collages celebrating masters and cultural icons in the art world, while Sabihis’ repertoire focuses on woodcut blocks and prints on canvas.

The opening reception is on 17 February 2017 from 7 to 10pm at Curate Henry Butcher, Mont Kiara. We Are 5 by Artemis Art

Artemis Art is celebrating its fifth anniversary with an exhibition from 13 to 19 February 2017 at White Box, Publika. The gallery will also be hosting its Chinese New Year Open House from 3 to 8pm on 18 February 2017. Throughout the exhibition, there will be artworks by more than 20 artists, primarily emerging ones from Malaysia and Indonesia. These include Adam K., Ajim Juxta, Anddy Romeo Dulait, Andrialis Abdul Rahman and Christine Das. Indonesian artist Pius Sigit Kuncoro has meticulously created something like a three-dimensional novel of retired freedom fighter, Mbah Tardjo. This exhibition offers insights into the subject’s life, through photographs, news articles, album covers and even book covers — paying homage to Mbah Tardjo’s resilience throughout his life. The artist will launch the exhibition with a talk and tour at 5pm on 18 February 2017.

6
ESCAPE from the SEA by various artists
This dual-venue exhibition is part of a curatorial development programme initiated by The Japan Foundation Asia Centres in Jakarta, Kuala Lumpur, Manila and Bangkok. The theme that’s being explored is the issue of identity, belonging and history through the politics of borders in the region and beyond. Participating artists include Adam David, Aoyama Satoru, Au Sow-Yee, Jeffrey Lim and Zai Kuning.
From 24 February to 23 April 2017, the featured works will be on display at the National Art Gallery from 10am to 6pm daily, as well as at Art Printing Works Sdn. Bhd. from 12 to 8pm daily.
National Visual Arts Gallery (Lembaga Pembangunan Seni Visual Negara), No. 2, Jalan Temerloh, Off Jalan Tun Razak, 53200 Kuala Lumpur, Malaysia, +60 3 4026 7000
Art Printing Works Sdn. Bhd. (aka APW Bangsar), No. 29, Jalan Riong, 59100 Kuala Lumpur, Malaysia, +60 3 2282 3233

Will Netflix series be focusing on art as the next big trend?

Want to deepen your knowledge of fine art? Try these podcasts