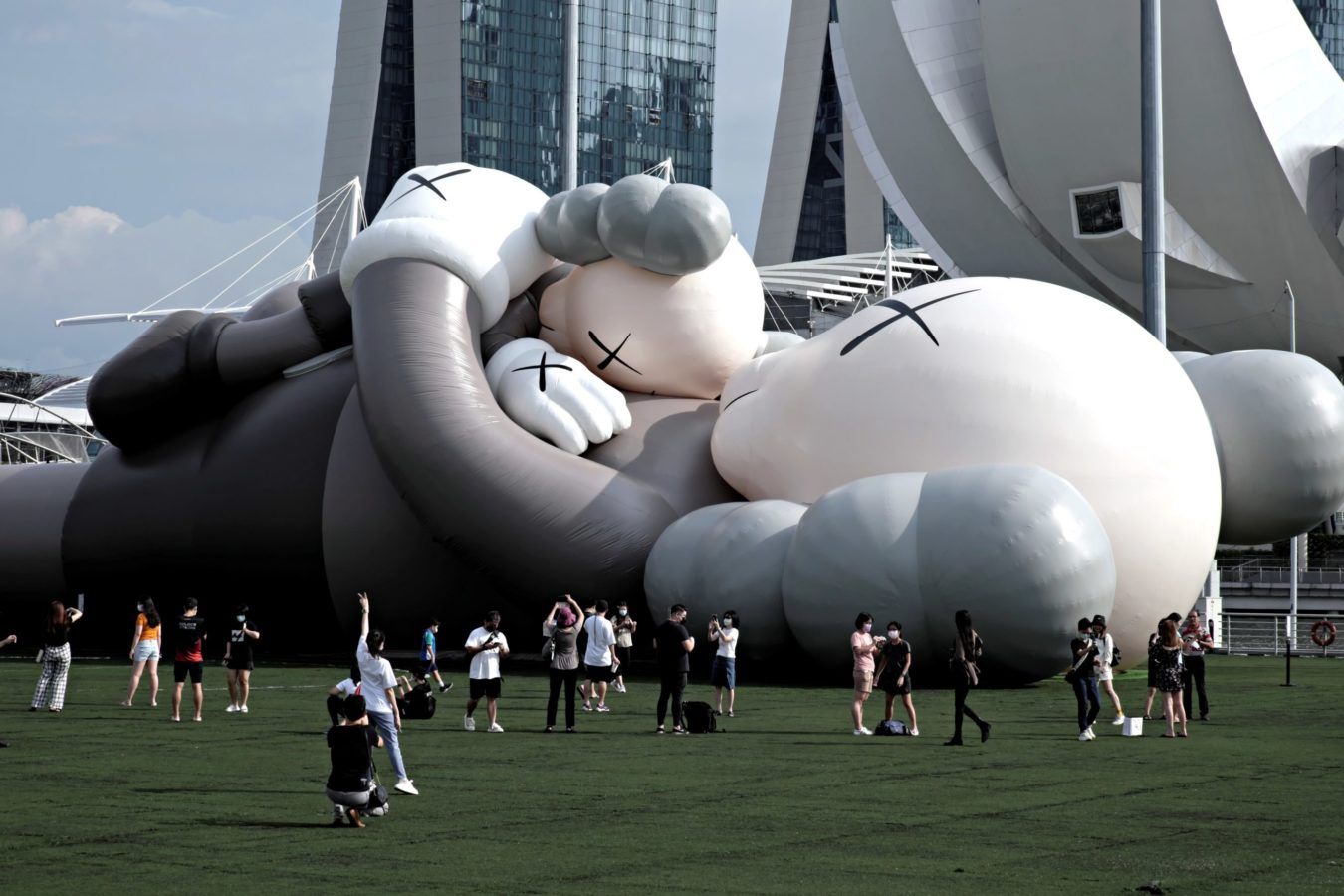 Bending street art into contemporary themes has always been seen as a sign of thought-provoking idealism, commonly known as graffiti. However, for Brian Donnelly, professionally known as KAWS, street art is all about individualism and branding. KAWS artworks are a statement in itself.

KAWS is an American artist known for his toys, figurines and clothing brand solely based on a fictional character. KAWS only adheres to individualism, and renders to pop culture enthusiasts and internet trends.

Donnelly started the concept of KAWS as a teenager, when he created KAWS tags and marked them on buildings and phone booths in New Jersey and Manhattan. Later, he manifested the name into a million-dollar brand that everyone adores.

Here are some interesting facts to know about KAWS

The KAWS Album was sold for USD 14.8 million

KAWS artworks can go from USD 20 to thousands of dollars, sometimes even more.

The KAWS Album was sold for a staggering USD 14.8 million. It was basically a ripoff from Simpsons The Yellow Album, which was itself a parody of The Beatles’ 1967 album Sgt. Pepper’s Lonely Hearts Club Band.

KAWS sold another painting in 2008, which fetched him GBP 1.03 million at a Sotheby’s auction in London. Named AGAIN AND AGAIN, the painting depicts SpongeBob SquarePants in vibrant blue, swimming-pool blue eyes, a red mouth and a grin showcasing his distinctive gap teeth.

Donnelly started his career as a graffiti artist

Starting his career in New York as a graffiti artist, he often posted the KAWS logo on billboards, bus stops and phone booths in his neighbourhood.

He later graduated with a Bachelor of Fine Arts (BFA) from the School of Visual Arts in New York, and started working as a freelance artist for Disney, where he created 2D/3D backgrounds for Disney movies.

For the next few years, Donnelly worked with many international brands and niches. His most memorable work in the ’90s was probably with brands such as Dior, Calvin Klein, Chanel and Diesel. The artist collaborated with Dior to create DIOR X KAWS BFF PINK DOLL in 2019. It is a polyester stuffed toy in a Dior suit encased in an acrylic box. The figurine was sold at Christie’s at USD 9,375.

Though his base character shares some similarities with Walt Disney’s Mickey Mouse, especially the rounded belly, oversized gloved hands and big shoes, KAWS characters are adored for their pop-culture referencing.

Be it the Japanese phenomenon, Hello Kitty or the American long-running educational children’s television series Sesame Street, the KAWS collaboration has produced the most compelling pieces of artwork in the form of figurines and paintings.

Brian Donnelly is like the Tony Hawk of street pop art, and he understood the power of online media early on.

At the time of writing this, KAWS has 4.1 Million followers on his Instagram account, and he shares his latest creations and collaborations with his followers, creating an ecosystem of KAWS artworks.

People and celebrities on the internet get updates about his latest figurines and artworks, keeping him relevant to the world. He does so by maintaining an online presence on various social media platforms.

As humans, we often look for the meaning behind words, letters and symbols. This is our nature to be generally inquisitive.

On the other hand, Donnelly concluded that KAWS itself doesn’t mean anything except the letters that look aesthetically pleasing when put together.

He took a similar approach while crafting his animated skull characters, who also seem to be missing emotions and activity.

In his interviews, Donnelly often stressed that his character is understandable and does not form any conviction or argument. The artwork just exists for the sole purpose of existing.

Donnelly is a master of all trades

He is an artist who evolved into a mainstream brand by doing what he is good at — creating art at all times. He made KAWS into a persona and something people can look up to.

In his initial days, KAWS was limited to graphic designing, paintings and animation. Later in his career, KAWS became a pop culture symbol and something that goes beyond drawing and sketching.

KAWS started working and experimenting with multiple industries and in a matter of time, KAWS figurines became a staple in pop culture genres.

Hip hop artists, luxury brands, TV shows and everything that connects people as a whole took their chances with KAWS, and the brand grew into a multi-million dollar industry.

A mortal example of KAWS disrupting the industries is KAWS World, a famous collection of 111 Genesis NFTs available on the Solana Blockchain. Each NFT piece symbolises diversity and creativity in the KAWS metaverse.

Donnelly and the distinctive art style

The concept of KAWS revolves around a few elements, which have become motifs for all his creations.

Donnelly purposely uses figurative characters that are similar to each other, while simultaneously connected to different pop culture-related art, for example, Astro Boy and Hello Kitty.

Another crucial and repetitive character he uses, is the letter ‘X’ of the English Alphabet, which can be seen in the eyes and hands of all his creations. If you look closely, most of the KAWS figurines usually have the same pose, hiding their eyes with hands, further personalising and differentiating his art style from others.

KAWS figurines are made of different materials depending on the theme and place. The artist works with wood, bronze, metal, steel and rubber to create sculptures that can be a few metres high.

Donnelly is an art collector himself

Several American artists have been inspired or at least visited SoHo, a neighbourhood in New York City known for its art and shopping.

And Donnelly, being the upcoming artist he was, was no stranger to SoHo, and he often collected art pieces himself.

In his recent interviews, he revealed his art collections and gave his opinion on different artists and how he collects his pieces.

Donnelly collects different artworks from the same artist and slowly increases his collection. He had art pieces from Raymond Pettibon, George Condo, Mike Kelley and Alex Katz, and many more are on constant rotation.

Donnelly has worked with an array of artists. Be it musicians, rappers, singers or dancers, KAWS has been involved in the entertainment industry since the early 2000s.

For Ye’s (formerly Kanye West) 808s & Heartbreak, KAWS collaborated with the rapper and created the album cover with his iconic art style.

The album was cherished by every hip-hop fan and was considered a classic in the music genre’s history after Ye’s albums Graduation (2007) and My Beautiful Dark Twisted Fantasy (2010).

Not only that, KAWS created album covers for other music artists as well, including Christina Aguilera’s D*Face and Travis Scott’s THE SCOTTS.

Art is like wine; it gets better and better as time passes. This law of art also applies to KAWS figurines. Donnelly’s has multiple rare KAWS figurines that are hard to acquire, and some are even impossible because of their rarity.

Art Graffiti Artworks Kaws Hello Kitty Clothing brand
Ashish Khaitan
Sign up for our newsletters to have the latest stories delivered straight to your inbox every week.