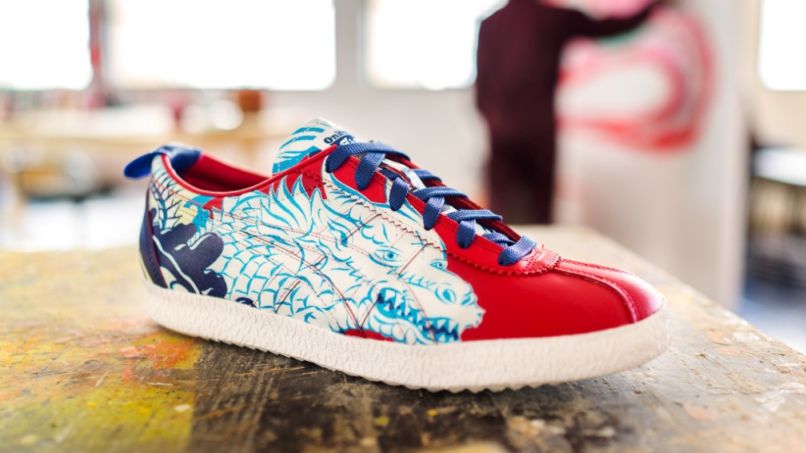 Onitsuka Tiger is one of Japan’s oldest shoe companies and since its incorporation in 1949, the brand has made shoes for football, track and field, tennis, running and even cheerleading. The brand’s most famous line is the Mexico 66 Line. This year, Onitsuka Tiger is introducing its new global campaign called The Art Of Mixing. This campaign is rooted in the cultural bonds between two antipodal countries — Japan and Brazil — and four artists with ties to both nations. Not known to many, Brazil is home to the largest Japanese community outside of Japan.

Four Japanese-Brazilian artists  — street Artist Atsuo Nakagawa, painter Felipe Suzuki, and visual artists Hamilton Yokota and Luisa Matsushita — were all commissioned by Onitsuka Tiger to come up with new versions to the California 78, Colorado Eighty-Five, Lawnship and Mexico Delegation, all classic models for the brand.

One of Brazil’s most prominent street artists, Nakagawa took over the Mexico Delegation shoe. He transfered dragons from traditional Japanese paintings on the natural leather of the shoe and cited mystery and fear as his inspirations. Painter Felipe Suzuki reinterpreted the Colorado Eighty-Five shoe using fluid motifs of dark grey and black with an orange semi-circle as a symbol of Japan.

Visual artist Hamilton Yokota a.k.a. Titi Freak uses the leather canvas of the Lawnship to create the shoe’s 2016 update. His design’s dramatic pattern was one that was inspired by his work that started in Japan and was finished three years later in Brazil. The lawnship’s dramatic pattern is the perfect expression of Yokota’s style. Luisa Matsushita a.k.a. Lovefoxxx is a visual artist and also the frontwoman of Brazilian indie band, Cansei de Ser Sexy. Using the California 78 shoe, Luisa designed a simple shoe that showed harmony and the simplicity of life, with colourful laces and a splatter pattern on the shoe’s midsole.

Check out the Onitsuka Tiger shoes from The Art Of Mixing campaign at any Sole What outlet.