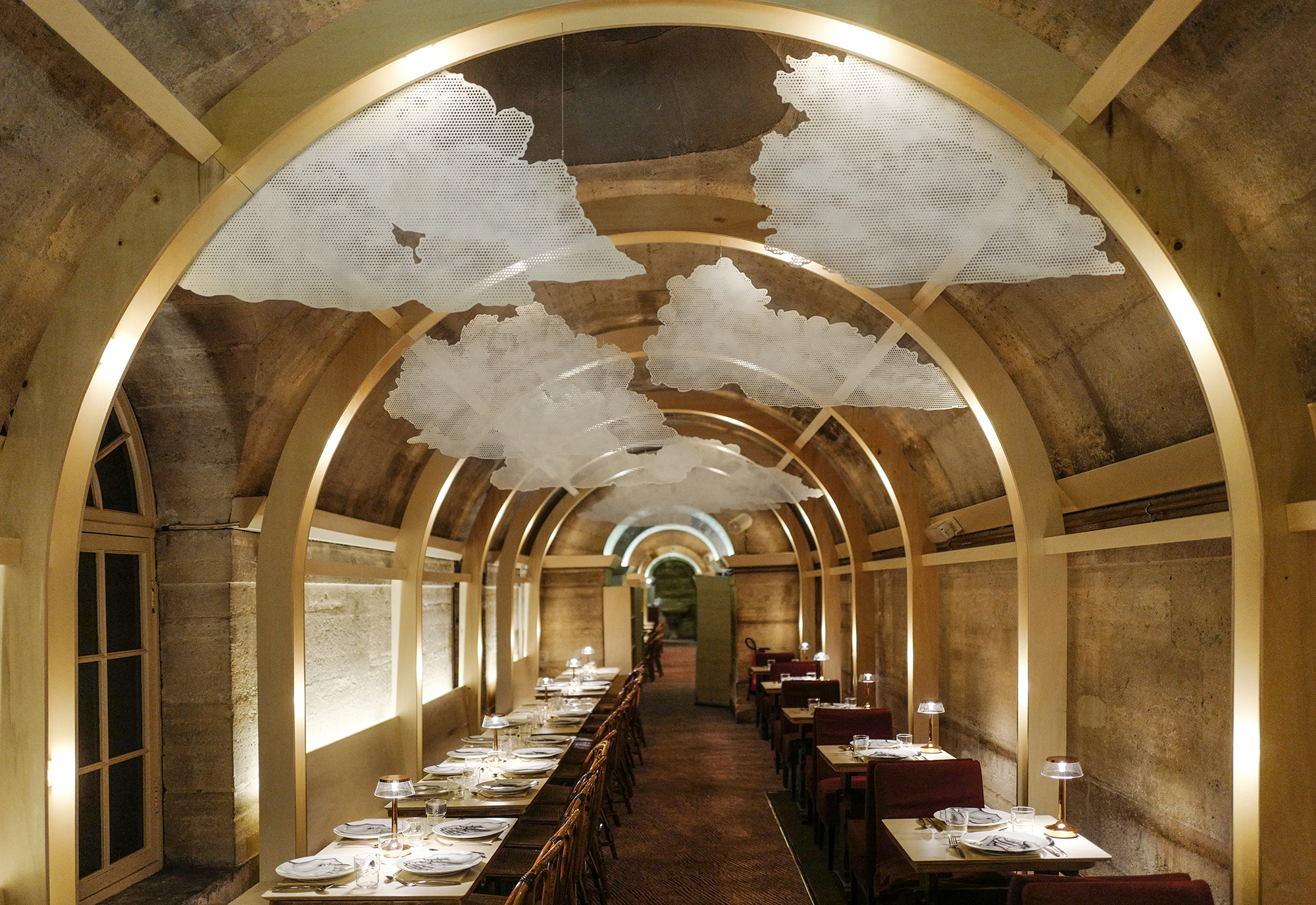 “Refettorio Paris is not a charity project, it’s a cultural one. By involving artists, architects and designers, we want to create an engaging and inspiring space where people in situations of social vulnerability, as well as the whole community, can feel valued and welcomed,” exclaims Italian restaurateur, Massimo Bottura of his third community kitchen after Refettorio Ambrosiano in Milan and Refettorio Felix in London.

Located in the crypt of the beautiful neo-classical La Madeleine church built in 1842, the new soup kitchen is cleverly designed to cater to the project’s objective to feed 100 people a day. Since its opening in March 2018, Refettorio Paris has created a collaborative community that helped in encouraging cultural and social inclusivity through a zero-waste initiative, especially in the food industry.

Working on the spatial interventions of the Refettorio, the 56-year-old chef has worked with architect Nicola Delon (Encore Heureux Architects) and designer Ramy Fischler (RF Studio) to conceptualise the interior space to its full potential. Ramy Fischler, who is Maison&Objet Designer of the Year 2018 explains that his design aesthetics are narrated exactly into the design of Refettorio Paris – synonymous with the way a director makes a film.

“There is a part of imagination and intuition that when combined with other concrete and scientific parameters, create a storyboard for us to express the way we imagine spaces and objects,” describes Fischler. “Design is like cinematic art, a vector of communication that addresses a message and can influence the behaviour of people.”

While design has a responsibility in impacting industrial and commercial values, it is in the essence of culture and history that provides meaning to the spaces designed. In the context of Refettorio Paris, the La Madeleine church becomes the lynchpin to its design concept.

Despite its modern interventions, Fischler takes his cue from the original classical features of the building. The idea of a ‘crypt’ is usually associated with being a dark and damp galley, but the implementation of a space-within-a-space concept using mere veneered wood and clever lighting has turned it into quite a spectacular dining hall.

“Our intervention is simpler than it looks. The space is already exceptional to begin with. We made sure that the spatial volumes are highlighted, thanks to the lighting concept and the idea of the wooden arches,” explains Paris-based Belgian designer.

The arches follow the original structure of the space. And respecting the nature of the site, Fischler ensures an unpretentious design scheme – minimal embellishment and easy maintenance.

The interiors highlight the zero-waste movement and its design hovers around the concept of revitalisation and upcycling. “We rehabilitated and restored the existing tables and chairs, to stay in the spirit of Bottura’s principal concept – do with what we have and do not throw anything,” confides Fischler. Everything displayed in the refectory has been reused but rearranged in an elegant way.

Dining in Refettorio Paris promises the needy and less fortunate a rejuvenating experience. The idea of the cloud adds a comforting element while a printed bespoke carpet depicting the earth acts as a reminder to stay rooted and humble.

Bottura has also collaborated with French artists JR and Prune Nourry as well as the controversial Kubra Khademi, an Afghan artist based in Paris who made the headlines for dressing in metal armour in 2015 over the protest against sexual harassment.

The creative partnership aims to create the most pleasant reception possible and bring together a large volunteering community. Fischler iterates: “I was approached by JR to work with him on this project. This project is important for me because it brings together people who share the same passion – both driven by their profession and common values to make a change in the community.”

The 10 most influential Asian contemporary artists you need to know