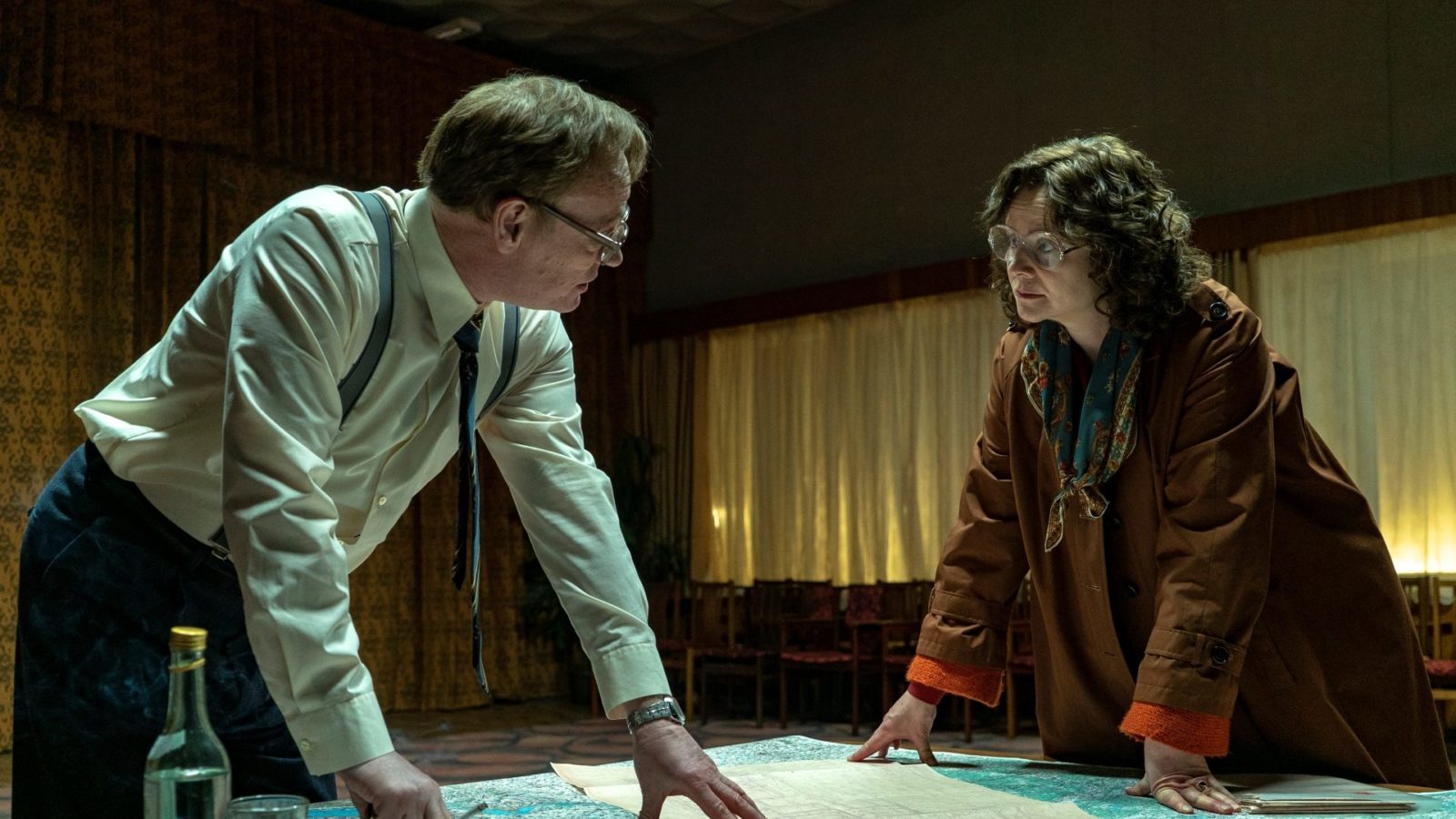 Fancy yourself a masochist? Then stream these shows for a wonderfully creepy time at home.

In case living in the actual time of the pandemic isn’t scary enough, a series of streamable pandemic-themed movies and shows have been gaining resurgence recently for their eerie similarities with what’s going on outside.

Feeling worn out by lockdown? Perhaps you’re the kind of binge-watcher (a subset of those who also love true crime documentaries, perhaps? The more disturbing the better…) who likes to take comfort in knowing that at least the horrors on-screen will — for the most part — remain in their fictional realities.

From films based on actual viral outbreaks to pandemics that spiral off into full-blown zombie apocalypses, as well as gutting dramatisations of the struggle to contain the spread of disaster (we’re looking at you, ‘Chernobyl’) here are 10 pandemic-themed movies that will (hopefully) tide you over until this is all over.

Zombies are an oft-visited trope in the horror movie genre, but somewhere along the line, filmmakers shifted from the supernatural element of re-animated corpses to the existence of a possible zombie virus. ‘Cargo’, starring Martin Freeman, is a film that centres around a father who has been infected by the virus and must get his daughter to safety before he completely turns. Based on a 2013 short film of the same name by directors Yolanda Ramke and Ben Howling, the movie doesn’t actually mention the word ‘zombie’ and is more focused on practical ways of approaching impending doom. It’s certainly one of the more unrealistic movies in the list but it does inject a new element of creativity into the zombie genre — even if the political references are too on the nose at times.

HBO’s ‘Chernobyl’ isn’t exactly a pandemic movie, though its characters’ race against time to handle a deathly outbreak of radiation poisoning (though its effects have been hugely dramatised here) sure feels like it. Based on true events, the historical drama series follows what happened after the steam explosion at the nuclear power plant near the Ukrainian city of Pripyat in 1986. The quarantine techniques have been portrayed appear eerily familiar to anyone who has seen the news the past six months. Its portrayal of the political response and life under Soviet rule has been lauded by critics for being surprisingly accurate. Combined with the stellar acting of Jared Harris and Emily Watson, will allow you to forgive its scientific inaccuracies.

Watch on HBO and HBO GO

‘Train to Busan’ has been critically considered to be one of the best zombie horror movies to exist, and you might consider (re-)watching it online before you catch its sequel, which opened in theatres on 15 July. Starring Gong Yoo and Ma Dong-seok, the film follows passengers on a train from Seoul to Busan as a zombie virus breaks out in their cabin. When they attempt to leave the train, they realise that the outside world has already been overrun and their only hope is to travel to their original destination. Interspersed with moments of social commentary and characters that you can’t help but root for, if you do decide to watch it (and we recommend that you do), make sure to have a box of tissues at the ready because it’s also a tear-jerker.

‘World War Z’ is another popular zombie movie with a pandemic twist. Starring Brad Pitt, it follows former UN field agent Gerry Lane as he works with a military team to track down the original source of the zombie plague that is now infecting most of humanity. The film takes you across South Korea, Israel and the United States as Lane works with the CIA and the WHO to help them develop a vaccine against the disease. Loosely based on the apocalyptic novel of the same name by Max Brookes, this is a film to keep you on the edge of your seats with one thrilling sequence after another.

‘Virus’ is one of the more realistic movies on this list that takes a look at how communities react to unexpected diseases. Based on the 2018 outbreak of the Nipah virus in the South Indian state of Kerala, the movie (with English subtitles) follows health workers trying to clamp down on the number of cases and prevent transmission. With no vaccine in sight, they realise they have to play it largely by ear to avoid mass infections, especially in less economically developed communities, eventually leading them to what the WHO referred to as “a success story.” The plot, coupled with picturesque looks at the region often referred to as ‘God’s own country,’ makes for a gripping watch.

This is the last one about zombies, we promise, but it is a good one. British post-apocalyptic horror movie ’28 Days Later’ centres on the aftermath of a zombie virus outbreak. We follow a bicycle courier named Jim who wakes up from a coma to a seemingly deserted world. Having missed the initial discovery and spread of the virus, he doesn’t know what has happened until he meets other survivors. Directed by Danny Boyle (‘Trainspotting’, ‘127 hours’), ’28 Days Later’ is often referred to as a combination of a zombie flick and a political allegory. There is something for everyone.

Like ‘Virus’, ’93 Days’ takes inspiration from real life events. It follows the Ebola outbreak in Nigeria in 2014 and how the virus was able to be contained in the capital city of Lagos. When a Liberian-American traveler presents malaria-like symptoms, his doctor notifies authorities that she believes it could be the deadly disease. Starring notable Nigerian actors, as well as Daniel Glover (‘Atlanta’, ‘Community’), it portrays the sacrifices health care workers make for the safety of their communities. It is also a more hopeful look at people coming together to avert disaster.

Award-winning ‘Death in Venice’ has become a classic in queer cinema, and is based on the 1912 novella of the same name by Thomas Mann. The impressionistic movie centres on a German composer named Aschenbach, who arrives in Venice at the height of the cholera epidemic. There, he becomes obsessed with a young Polish boy Tadzio whom he sees more as an ideal of beauty than an actual person. Placing the epidemic as backdrop rather than front and centre like the other pandemic-themed movies in this list, ‘Death in Venice’ is instead a look at how human society is willing to ignore the pressing concerns of disease for relatively frivolous things like the pursuit of love, the opera and vacations.

‘The Andromeda Strain’ revolves around four scientists trying to eliminate an alien microorganism in New Mexico. Directed by Robert Wise (‘Sound of Music’) and based on the acclaimed 1969 novel by Michael Crichton, the alien apparently hitchhiked on a US satellite which crashed near the town of Piedmont, showing an uncanny ability to turn blood into dust. When all the residents of the town die, a team of scientists is assembled to try to kill it. Even though it’s not really about a virus (or even a zombie one), the film does explore the possibility of harnessing the alien’s power to create a biological weapon. Crichton, an alumnus of the Harvard Medical School, had used scientific journals to help create his fictional world and, as a result, ‘The Andromeda Strain’ (novel and film) is seen as one of the more scientifically accurate creations out there. It’s a must watch for anyone interested in the sci-fi genre.

The final movie on our list is ‘Contagion’ — the Steven Soderbergh film that critics and cinephiles alike have been revisiting in recent months. With an ensemble cast comprising Matt Damon, Jude Law, Kate Winslet and Gwyneth Paltrow among others, the film tracks the outbreak of a mysterious disease called MEV-1, inspired by the real-life 2009 H1N1 pandemic. The film offers a number of eerie reminders of the current situation, though ‘Contagion’ presents the audience with a virus that is far more deadly than CoViD-19. Moving fast between geographical locations and different types of people (from the infected to doctors to the general public), Contagion will keep you hooked till the end.