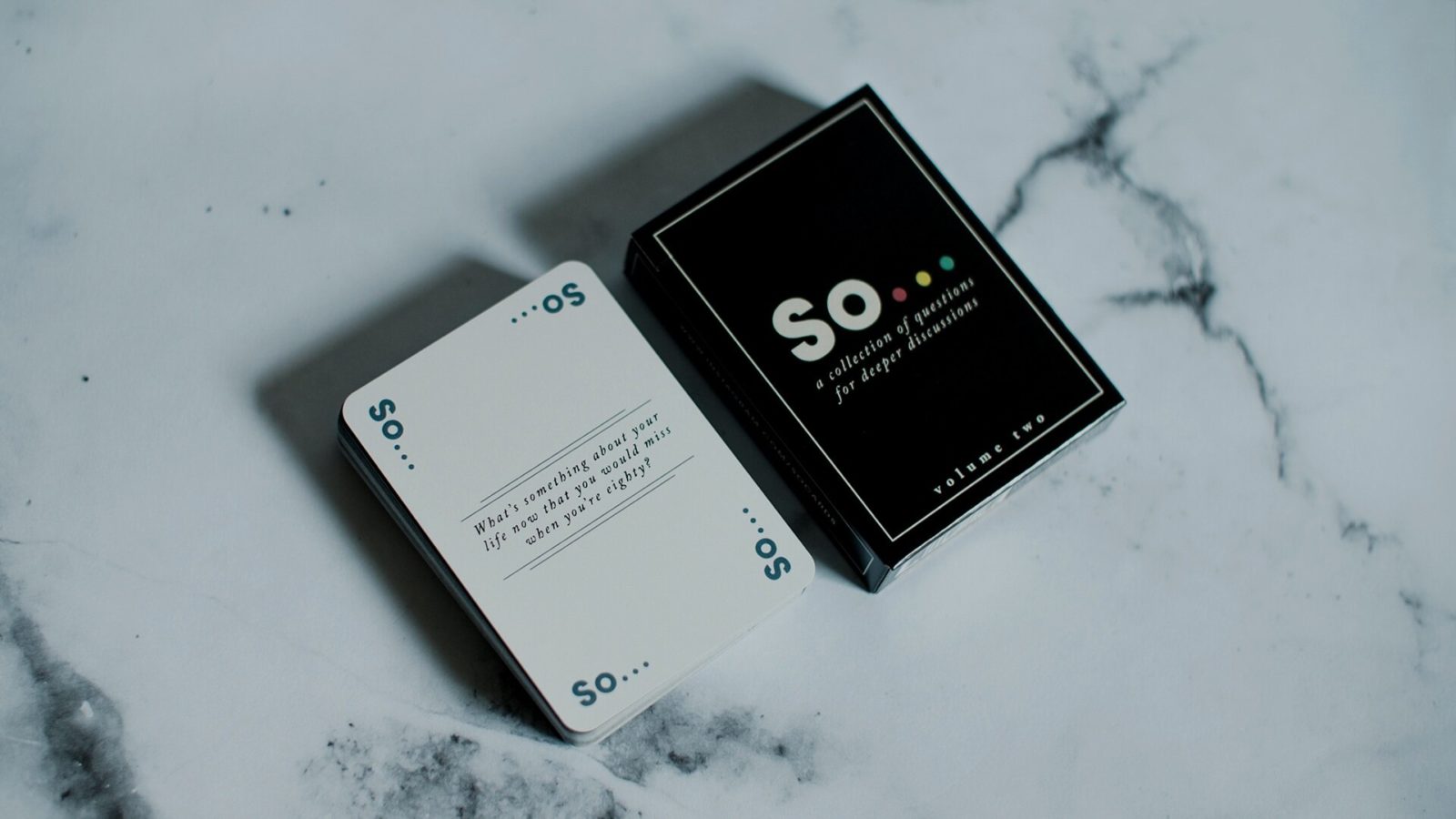 These card games make the perfect conversation-starter in any room

Want to have honest and meaningful conversations? Try these card games.

The art of conversation is a dying one. Through technology, we have developed a new, default mode of communicating that is as substantial as our attention spans. Texts, memes, Tweets, WhatsApp messages — we fire our digital missives just as quickly as we switch between apps, never quite letting the seeds of a meaningful connection grow. And what we get at the cost of empathy and honesty, the fruits of those connections, are likes, retweets, emoji reactions and other such online interactions that we call “engagement”.

Even our face-to-face engagements are being disrupted; so much as the presence of a phone can decrease the quality of a conversation. And it’s universally agreed that hanging out with someone who is on their phone is one of the worst feelings in the world. The act even has an ugly name to go with it: “phubbing”.

A slew of new card games, aimed at getting people to really talk to each other, are the unlikely heroes of this 21st-century tragedy. They come with prompts and questions that gently prod its players along a path of vulnerability and intimacy: What is an idea you strongly believe in? If you had 24 hours left to live, who would you be with? How are you, really?

Opening up about yourself can seem more terrifying than summoning a spirit on an Ouija board, but if you play your cards right, the experience can be as cathartic as a therapy session — something that most of us could use, anyway. Consider these card games as a way to work through the sense of isolation that technology has left many of us with and that the pandemic has only exacerbated. They are win-win games, after all: You’ll get to know your loved ones better, and maybe discover something about yourself as well.

If you’re going on a first date that isn’t a Zoom call, or hanging out with a group of friends or simply want to spend some meaningful time with your family, try out one of the card games below. Just remember to put away your phones. 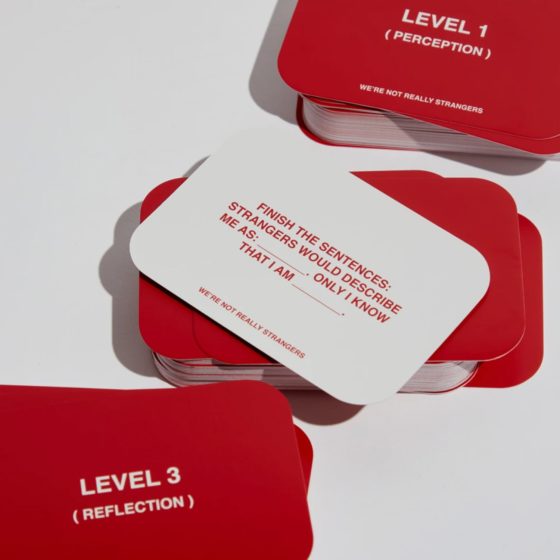 We’re Not Really Strangers, known simply as “WNRS”, is the most popular game on this list, boasting some 3 million fans on Instagram. It has even been played by celebrities like Hailey Bieber and Penn Badgley.

The game is simple enough: You and up to five other players sift through three levels of the iconic red cards, centred on perception, connection and reflection respectively. In response to the final card, players leave each other a handwritten note that can only be opened after they part.

There are 150 questions and “wildcards” in the mix, but you can always expand your collection with the Honest Dating and Relationship packs, or the new, limited-edition Valentino pack. 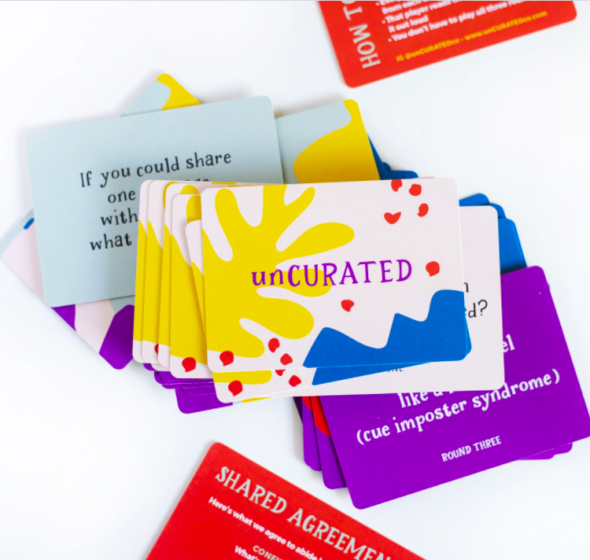 For a more light-hearted approach to heavy conversations, try Uncurated.

The colourful card game features three rounds of questions, some of which are playful (“What emoji do you use frequently?”) and positive (“What is something that brings out the best in you?”). These will ease everyone into the hard-hitting cards in the later rounds. (Get ready to confront your imposter syndrome, kids.)

Through the 50-card deck, you and your loved ones will hopefully share a sense of connection, self-awareness and empathy with each other. 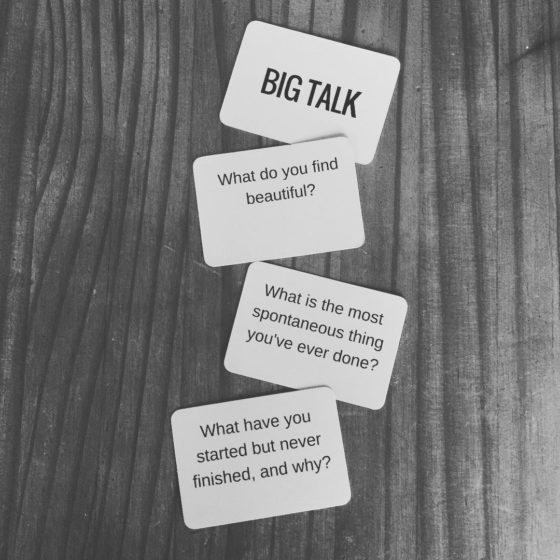 Meant more as an icebreaker game between strangers and acquaintances, the white cards feature an array of questions ranging from the universal to more personal ones. The former is great for talking about topics other than the weather, while the latter might bring forth more meaningful life anecdotes to help bridge the gap between you and the other players.

For an idea of the kind of questions that could come up, watch this clip of Billie Eilish taking on some Big Talk cards on her own. 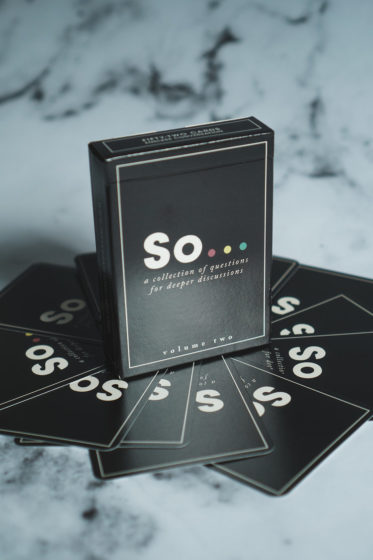 So Cards creator Miguel Luis discovered that great conversations often start with one good question (hint: it’s not “How are you?”). In his deck, he offers 52 of them.

Meant to be played among family, friends, couples or even strangers, So Cards suggests different modes of playing. The “Classic” mode lets everyone answer the same question, and the person with the best answer picks the next card. “If I Were You” encourages players to answer not as themselves, but as the person who picked the question card. “Power Hour” adds alcohol into the mix, with players taking a shot of beer before answering the question within a minute.

While the standard edition is great for parties and first meetings, you could also try your hand at So Cards’ Unstuck Yourself cards if you’d like to dig even deeper, or get to know your partner through the the More Than Friends deck. 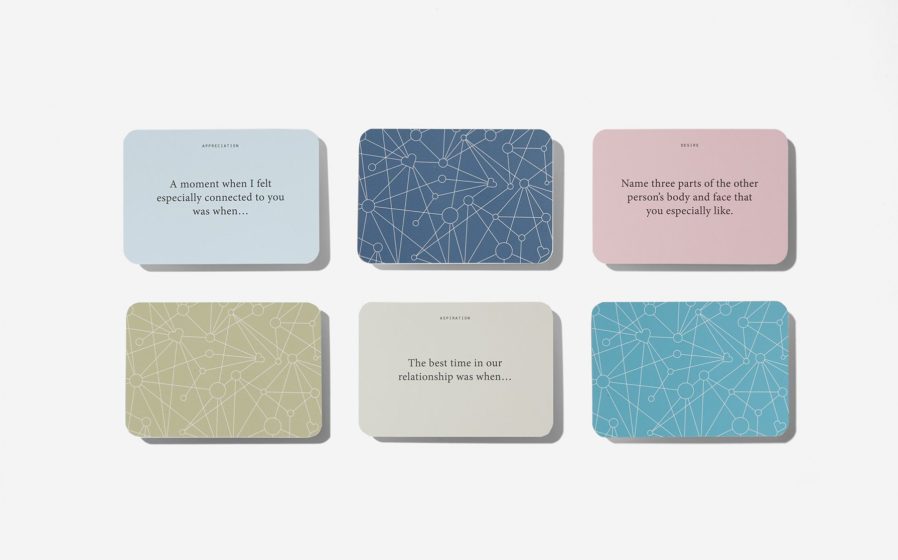 If you’re a fan of School of Life’s beautiful, animated Youtube videos that marry philosophy and self-help, you’ll love its Connect card game.

Aimed at encouraging couples to “remember why you matter to each other”, the set features a dice and 100 question cards that cover categories such as appreciation, aspiration, desire, forgiveness and growth.

The cards won’t go easy on you and your partner; expect prompts like “When appreciative friends discuss us, what do you think they might celebrate in us?” or “The trick to understanding why I can sometimes be difficult is to remember that…” And, because this is a deck for grown-ups, you’ll also find sex-related questions to help rekindle your affection for one another.