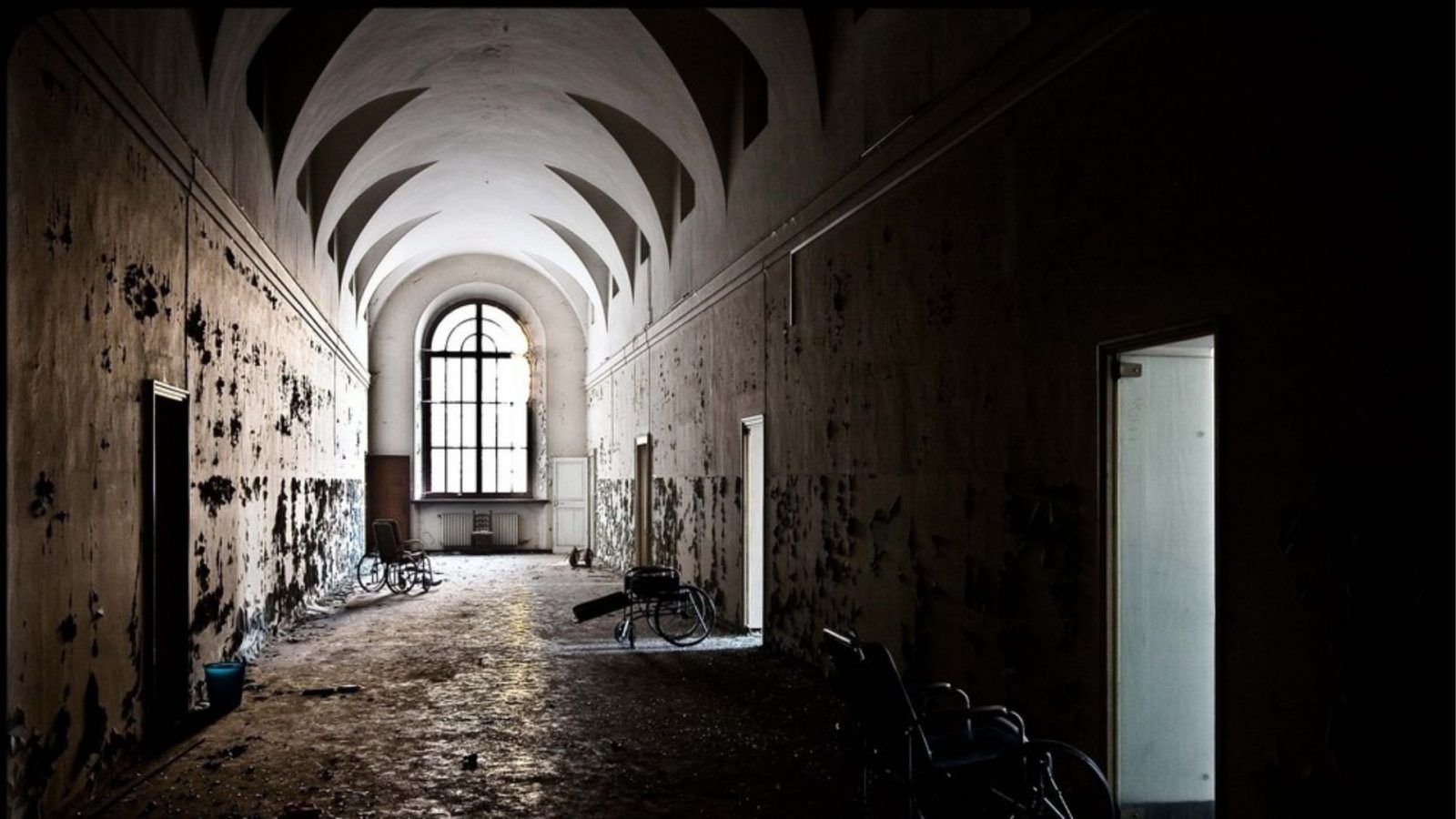 You may peek through the slivers of your fingers, hold on to the person next to you or even scream at the slightest turn of spooky events, but there is no denying that horror films are one of the most loved and highly watched movie genres. If you are a fan of this genre who likes the occasional adrenaline rush and all things spooky, we have rounded up some highly underrated horror films that you may have missed but are a must-watch.

From psychological thrillers to horror dramas with gory bloodbath scenes and jump scares, the horror genre has evolved with new ways of telling old ghost stories offering a wide array of scary movies and horror anthologies which are sure to keep you awake all night. For those who like the slightly light-hearted ones, horror comedies are a great option.

Whatever your preference is, if you enjoy a dose of nerve-wracking thrill and bone-chilling suspense, some of these underrated horror movies are sure to tick all the right boxes.

Busy subway trains as the principal backdrop of a horror film itself makes The Midnight Meat Train quite unique and unusual among other horror movies. Starring Bradley Cooper, Vinnie Jones and Leslie Bibb, the film is an underrated horror flick full of gory scenes, bloodbath and suspense.

Leon (Cooper) is a budding photographer who wanders around a subway station trying to capture photographs of passersby. One day he tracks down three guys in a subway station where they attack a woman. Leon rescues her but finds that she is missing the next day. He gets obsessed as the missing cases keep increasing with the days. Finally, Leon sees Mahogany (Jones), an elegant butcher who sacrifices night commuters. What happens next makes this scary film a must-watch.

When passengers on a train to Busan start turning into zombies and attacking others on board, what a father does to protect his daughter makes this South Korean film an interesting watch.

Eschewing from the typical ingredients of a horror film, this zombie movie is more of a survival tactic film where every wrong turn costs the passengers their lives as well as that of everyone around. While depicting the horrors of a zombie outbreak on a moving train, the horror flick tells a heart-wrenching story of a workaholic father, Seok-woo (played by Gong Yoo) and his daughter Soo-an (played by Su-an Kim), who are also onboard.

This 2016 horror film has a sequel titled Peninsula (2020) as well. It is not a direct continuation of the events but is set four years after the zombie outbreak in the previous film, when most of the Korean peninsula has succumbed to zombies.

Kaylie sets out on a mission to absolve her brother Tim Russell (Brenton Thwaites) who was arrested for murdering their family. Desperate to prove that the ominous happenings that had befallen the family were doings of an evil antique mirror, Kaylie sets up numerous cameras and timers. She spends a night with Tim to uncover the truth and prove her claims right.

As time bends on itself and high tension grapples the viewers with every passing minute, the final act unearths the daunting secrets of the family.

With an impeccable direction by Mike Flanagan, who has also helmed other critically acclaimed great horror films like Hush, Doctor Sleep and Netflix’s Haunting of Hill House, Oculus indeed arouses goosebumps. The film was released in India in 2014.

Unlike other serial killer films in the horror genre, The Clovehitch Killer is one of the few underrated horror movies that make you wonder about the killer’s whereabouts and his connection with you.

It revolves around the devout Christian Burnside family which has a dark and grave secret lurking behind the apparent appearance of the happy family. Donald ‘Don’ Burnside (Dylan McDermott) is a devout but strange family man who lives in a small town in Kentucky, USA.

A flurry of events, horrific killings and shocking revelations follow, which turn the lives of the Burnside family upside down.

Would You Rather is one of the best horror films with an eerie and tense atmosphere as well as a stellar performance which makes it a must-watch for horror fans. If you thought the deadly games of Squid Game are tough to swallow, this horror film had already done something similar, long back.

The film plays out as a simple competitive party game of the same name where every contestant has to choose between two options to advance towards a huge cash prize. Iris (Brittany Snow) enters this seemingly harmless game night hosted by Shepard Lambrick (Jeffrey Combs) to garner cash for her brother’s treatment. But, soon the players realise the deadly twist as per which they have to kill or torture each other in every round. What it takes to survive and win makes the film quite a nifty thriller-horror.

Replete with some of the iconic horror movie tropes, the movie stars former wrestler CM Punk as the bedevilled protagonist, Don Koch. Don moves into a new country house to start afresh with his pregnant wife Liz (Trieste Kelly Dunn).

However, when creepy neighbours start pouring in, marbles begin to fall off the walls and the local pastor reveals the horrific history of the house. Don’s past criminal habits surface and a happy ending seem bleak for the couple.

This horror film may not scare you to bits but is a sure-shot entertainer while adding the right dose of thrill and scary vibes.

While walking in the footsteps of his father and acclaimed director David Cronenberg, Brandon Cronenberg has made a niche for himself with his mind-bending narrative and visually attractive commentary, which shows in this body horror film.

This film is far from evil spirits possessing an innocent victim and instead fuses two psyches for an ultimate deadly motive. Tasya Vos (Andrea Riseborough) uses mind hijacking technology to kill people for a mysterious company. The film is full of unseen turns as it merges the supernatural with modern day corporate professionals and technology.

For her latest task, Tasya’s target is a person assigned to collect data from smart home devices. But it is not as easy as it sounds given the twists and turns that take place thereafter.

Two girls, Kat (Kiernan Shipka) and Rose (Lucy Boynton) are left behind in a Catholic boarding school during the winter break when their parents are unable to pick them up. They soon discover something sinister and satanic lurking around the corner and a series of deadly events follow.

Gory beheadings, cold murders and an evil spirit possessing one of them make this film worth watching for horror lovers. Also starring Emma Roberts as one of the leads named Joan, the film spans over three timelines connected by evil spirits and diabolic forces. The cast also has Lauren Holly and James Remar.

The Other Lamb is one underrated horror film which uses the cult trope and subverts it into something hideous and extremely thought provoking.

Selah (Raffey Cassidy) is born into a cult where there are only women. These women are either Mothers or Sisters (nuns) and the cult group is being led by a man referred to as Shepherd (Michiel Huisman). As Selah attains puberty, Shepherd takes a special interest in her. She soon begins to question his practices and control as well as thinks about life outside this cult group.

As the group is evicted from their forested compound, the journey to find a new residing area raises doubts and questions regarding Shepherd’s motives and things take a cold and deadly turn.

Watch The Other Lamb here.

An American psychological horror movie, Session 9, follows an asbestos abatement team getting to remove asbestos from an abandoned mental hospital. Working under intense pressure and tight deadlines, the team soon finds things spiralling out of hand and there are far more dreary things hiding among the walls than just asbestos.

Horror fans are sure to find it hard to forget this underrated film which stars David Caruso, Stephen Gevedon and Josh Lucas. You may have to watch the entire film from between fingers but such horror movies are enjoyed with all the anxiousness and suspense.