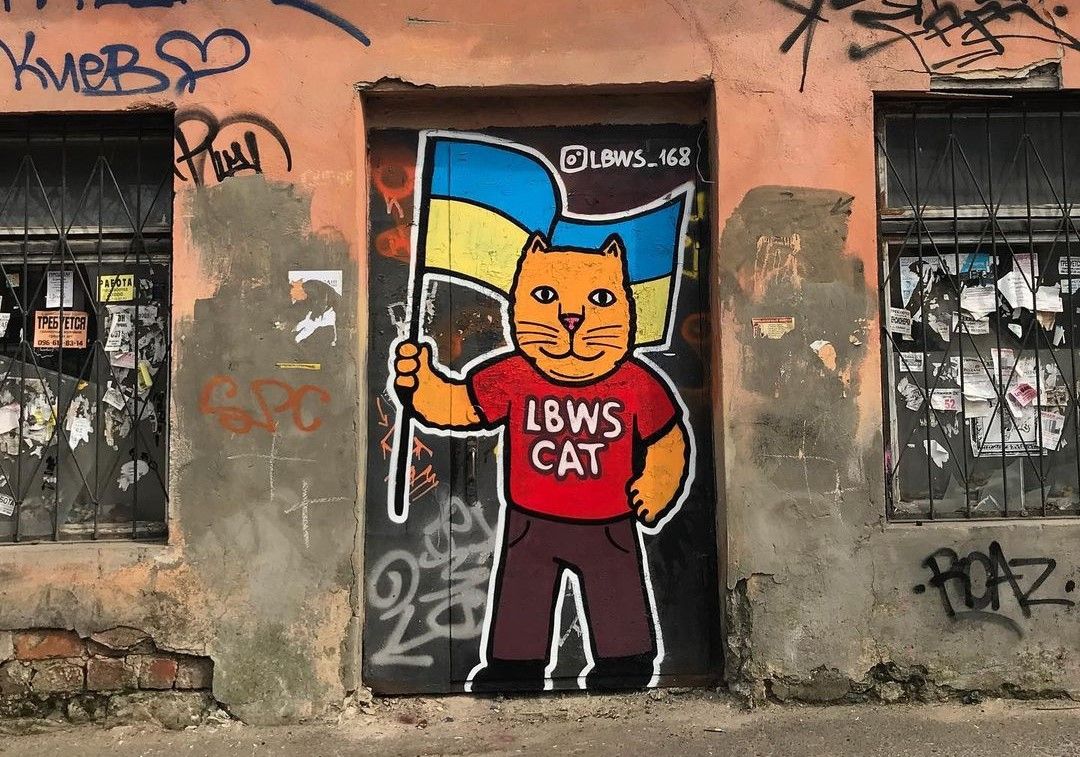 The arts live on in spite of Ukraine’s bleak future.

Painted on a wall in the southern Ukrainian city of Odessa, a blue cat grins triumphantly as it tramples on a pile of smouldering Russian planes. In a care-free show of defiance, a Ukrainian graffiti art collective has sprayed dozens more such felines on the walls of the Black Sea port since the start of the war.

“Odessa is a port city, so there are a lot of cats. With the war, they had to become patriots,” said Matroskin, one of the street artists in the group that calls itself LBWS. “This is the only option we have. Some are volunteers, some fight on the frontlines. Some raise their spirits with cats,” the 32-year-old said.

What is LBWS and why is the group creating cat-theme graffiti arts in Ukraine?

In Odessa’s Privoz Market, the graffiti depicts bazooka- and pistol-wielding tomcats crushing Russian warships and sporting military tops while making victory signs with their paws. This is not the sophisticated sort of street art made famous by Britain’s Banksy whose works have dotted walls across the world and now fetch eye-watering prices at auction.

It’s more naive and jokey, but conveys the message of resistance just as effectively.

Around a Godzilla-like cat annihilating Russian aircraft are painted the words that have become an unofficial slogan of the resistance to the Russian invasion: “Good evening. We are Ukrainians.”

In its bid to gain control over the Black Sea region, capturing Odessa is a strategic priority for Russia. But the city of one million people continues to flaunt its freedom with the ironic street art. In 50 days of war, fewer than 10 strikes have hit Odessa, causing mostly material damage.

The relatively free lives of Odessa’s residents seem to reflect the military situation in this part of Ukraine.

Barely any checkpoints hinder movement in the city, with the exception of a few barricades and sandbags near the port, a stark contrast to the death and destruction in besieged Mariupol or the capital Kyiv. Only with the night-time curfew does Odessa turn into a ghost town, with the lively cafe terraces falling silent and the packed roads emptying at 9:00pm on the dot.

“Odessa people are not in a panic. They are in ‘drive’ mode. They are ready for everything, but hopefully it won’t come,” said Mikhail Beyzerman, 59, a well-known cultural figure in the city. Psychologist Alex Krugliachenko diagnosed a sort of war “denial” in Odessa, as people enjoy small blessings, such as drinking a cappuccino or living another day.

“We all know what is going on, how people suffer in other cities, but we want to share some kind of hope that everything is going to be OK,” he said.

Art Graffiti Ukraine
Lifestyle Asia
Art
Sign up for our newsletters to have the latest stories delivered straight to your inbox every week.

9 celebrities who have entered the NFT world: Messi, Bieber and more