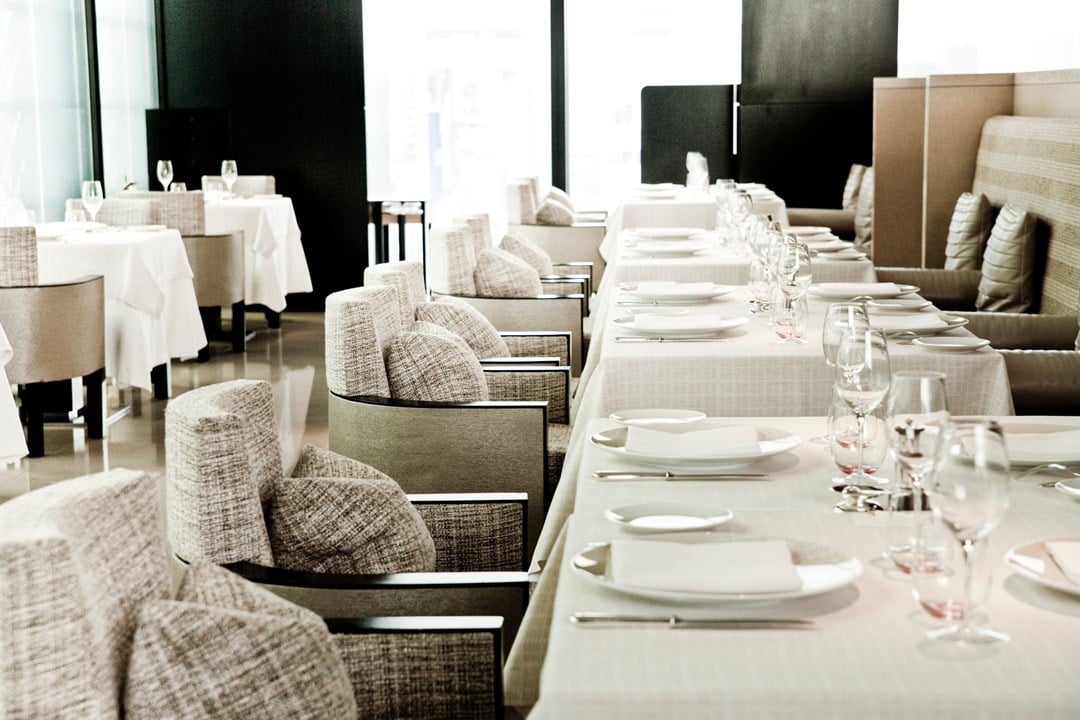 Visit these 10 cafes around the world by luxury fashion brands

Luxury fashion brands have been branching out to cafes over the past few years. But do you know them all?

Since the emergence and eventual popularity of online shopping, luxury fashion brands have been trying to get creative in giving its customers a reason to visit the traditional brick-and-mortar retail spaces. This, in turn, has birthed the idea of branching into the F&B scene.

From the likes of Gucci to Dior, and even Chanel, these fashion houses have all jumped onto the luxury cafe trend. Given the amount of detail it brings to its retail outlets, imagine what it can do with cafes, restaurants, and bars.

Even Louis Vuitton will also be introducing its first-ever eatery, Le Café V on the top floor of the brand’s new four-level store in Osaka, Japan. Speaking of the Land of the Rising Sun, it’s very own A Bathing Ape a.k.a Bape will be opening the first-ever Bape Cafe right in our city at Suria KLCC Shopping Mall.

In the mean time, refresh your list of cafes owned by luxury fashion brands with our recommendations below.

Stories you may be interested in…
Style
Sophie Delafontaine is making Longchamp a brand of the future
Style
Icons before Instagram: How Cristóbal Balenciaga became one of the best haute couturiers The 1921 Gucci Cafe first opened its doors in 2015 in Shanghai, China to reach another level of sophistication. The year 1921 pays tribute to the House’s foundation year and how far it has come since then. This full-service restaurant and cafe boast sleek and contemporary furnishings to go with its sophisticated ambience. Given its Italian heritage, it seemed only proper for them to showcase a truly unique and different take on proper Italian cuisine. 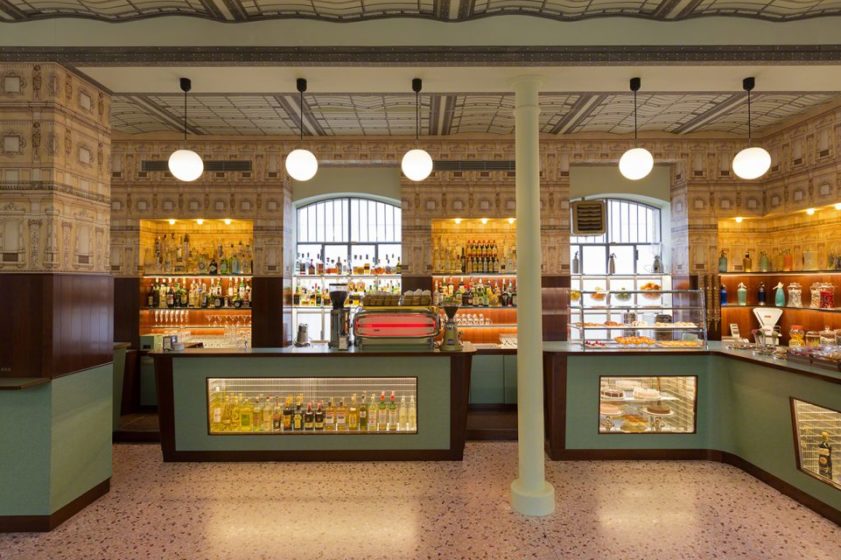 Another Italian label that brings its creative traits into the world of haute cuisine comes Prada with Bar Luce. This Milanese cafe is situated in the heart of Milan at the Fondazione Prada. What makes Bar Luce one-of-a-kind is its design, which was specially created by renowned film director, Wes Anderson. As expected, the bar features Anderson’s signature pastel shades in all its glory, including the furnishings or the wallpaper. 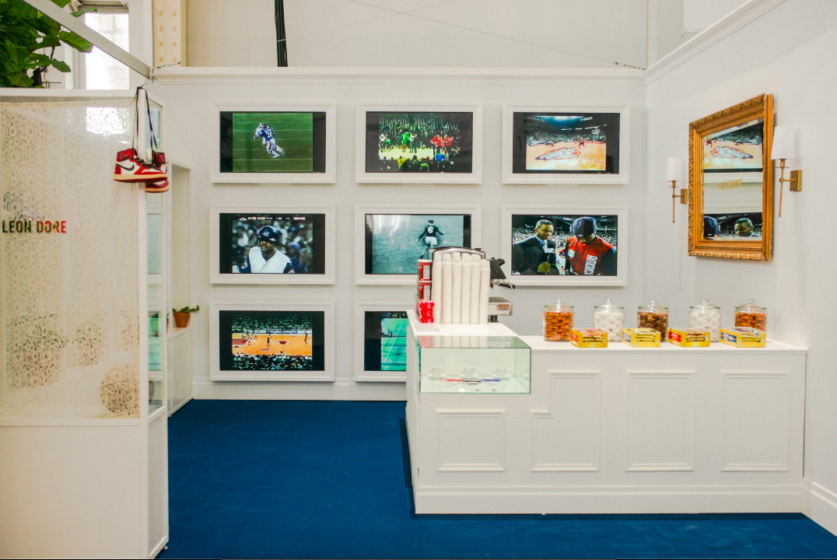 Luxury streetwear labels are also keeping up to the trend of setting up cafes, like Aimé Leon Dore. It opened its caffeinated extension, Café Leon Dore within its NYC flagship store. The brand has amassed a cult-like following in the past few years and with it comes the latest trend to keep its customers in the store even longer. Café Leon Dore also offers an outdoor seating area for you to contemplate on your next purchase. 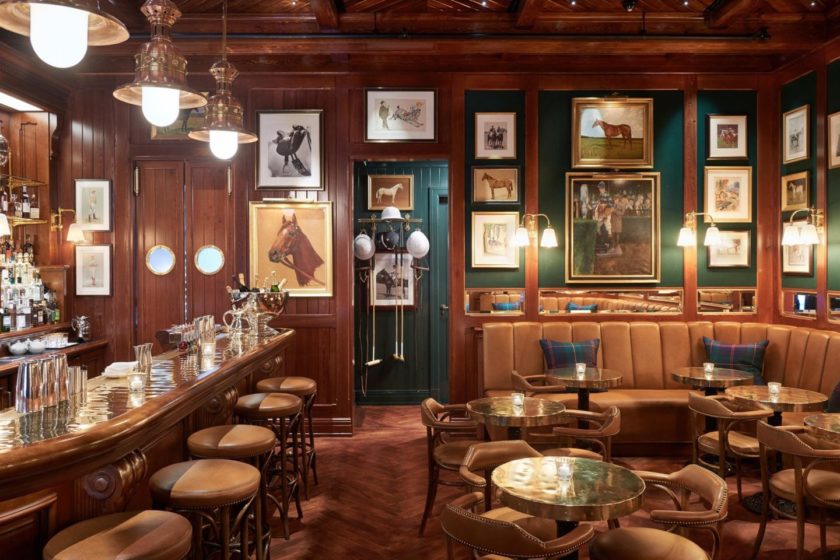 Ralph Lauren is a brand known the world over, with some help from the iconic Polo Bear design as well. As for its eatery, Ralph’s Coffee & Bar, it opened its doors in 2016 and quickly became one of the hottest dining destinations in Mayfair, London. Its decor draws inspiration from the Polo Bar in NYC with its walls featuring various equestrian art and memorabilia. Ralph’s Coffee & Bar offers a wide variety of coffee, cocktails, bar snacks, and shared plates in a curated menu with traditional American fare. 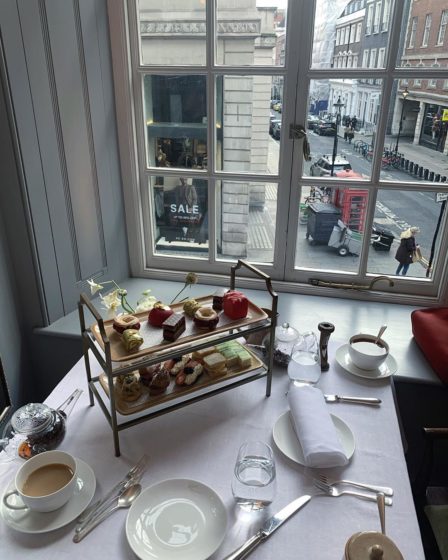 Thomas’s at Burberry is located in Central London on Vigo Street, bringing a sense of tranquillity amidst a sea of luxuriant flamboyancy. Its decor brings plenty of light into space with light-coloured walls and accessories to go with its dark-wood furniture. This gives it a timeless appeal, much like the hold Burberry has on the industry. Its menu is highly artisanal with produce coming from local artisans and farmers.

Leave it to Chanel to go all out in the gastronomical space in Ginza, Tokyo alongside a famous chef. The swanky joint-venture between two iconic French names — Chanel and Alain Ducasse — saw the birth of Beige by Alain Ducasse. The two-Michelin star restaurant was designed by Chanel’s very own boutique designer, Peter Marino. Aside from its contemporary and elegant interior, patrons can expect authentic French cooking with the finest Japanese ingredients. 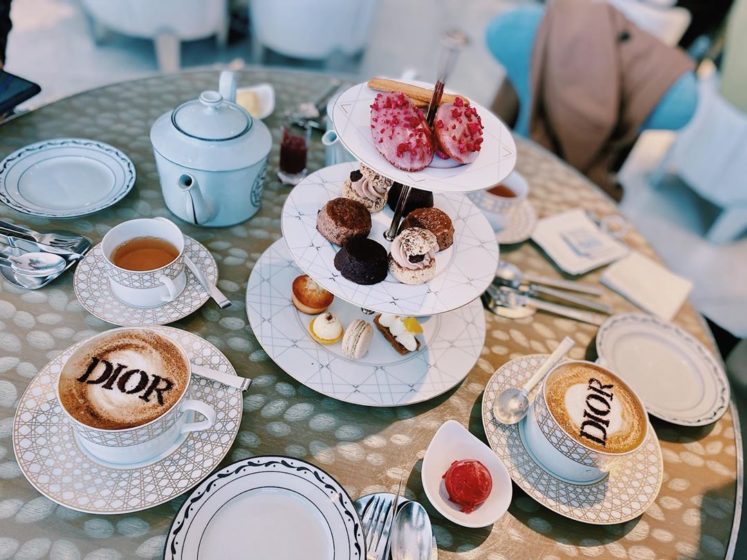 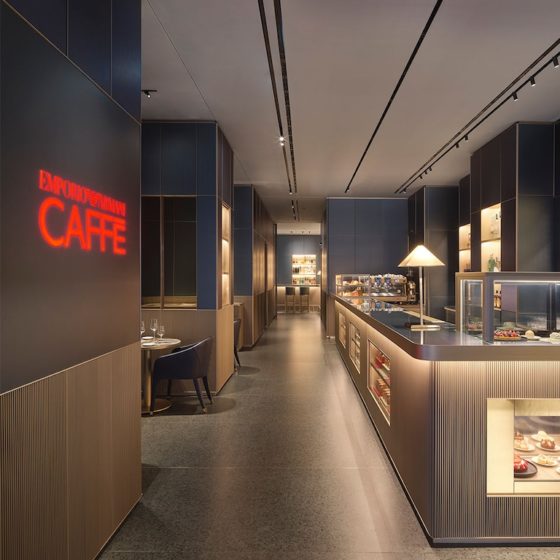 If you’re ever strolling through the streets of Milan, be sure to check out the Emporio Armani Caffe and Ristorante, located on the ground floor of the Emporio Armani retail headquarters. The eatery is divided into two sections — the ground floor is the cafe while the upper floor is where you will find the fine-dining restaurant and champagne bar. Expect authentic Italian cuisine to go alongside the finer touches of detail put into the entire restaurant, bar, and cafe. Maison Kitsuné is more than just a fashion label these days – it’s a society. Aside from sweeping the globe with its clothing, it’s also doing wonders for the cafe culture. The first Café Kitsuné opened in Tokyo, Japan back in 2013 and the latest one takes to the streets of Gangnam, Seoul. The cafe itself is riddled with its distinctive branding to complement its large green terrace area. Aside from coffee and treats, there is also a shopping area for its own clothing collections. 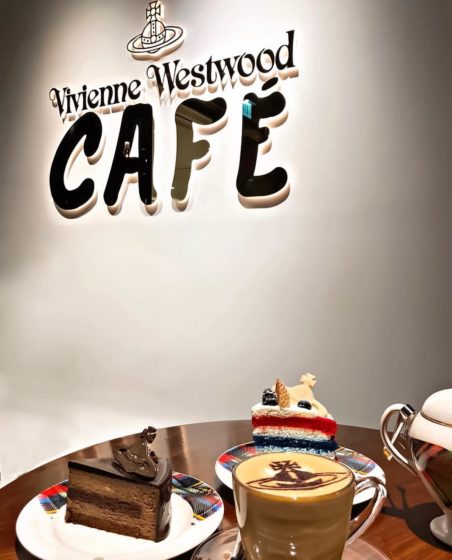 Making its mark in Causeway Bay is none other than the Vivienne Westwood Cafe. The Hong Kong-based luxury fashion cafe offers a varied menu with afternoon tea sets and small plate options. Coffee boasting the brand’s iconic logo on the art is a key photo-worthy takeaway as well as its cakes. If you’re dining in, look out for tableware that features the designer’s signature tartan pattern.

Address
Shop 9-10 & 22-23, G/F & Shop F-8, 1/F, 27-47 Paterson Street, Fashion Walk, Causeway Bay, Hong Kong
Website
Website Here
fashion cafes luxury fashion cafes fashion cafes around the world
Wi-Liam Teh
Senior Writer
Wi-Liam is a geek at heart with a penchant for tattoos. Never without a drink in hand (preferably whisky, gin, or Guinness), he is also a writer by day and a keyboard warrior by night. On his day off, he masquerades as a streetwear and sneakerhead enthusiast while his bank account says otherwise.
Tech Cars Watches Entertainment Food Drinks