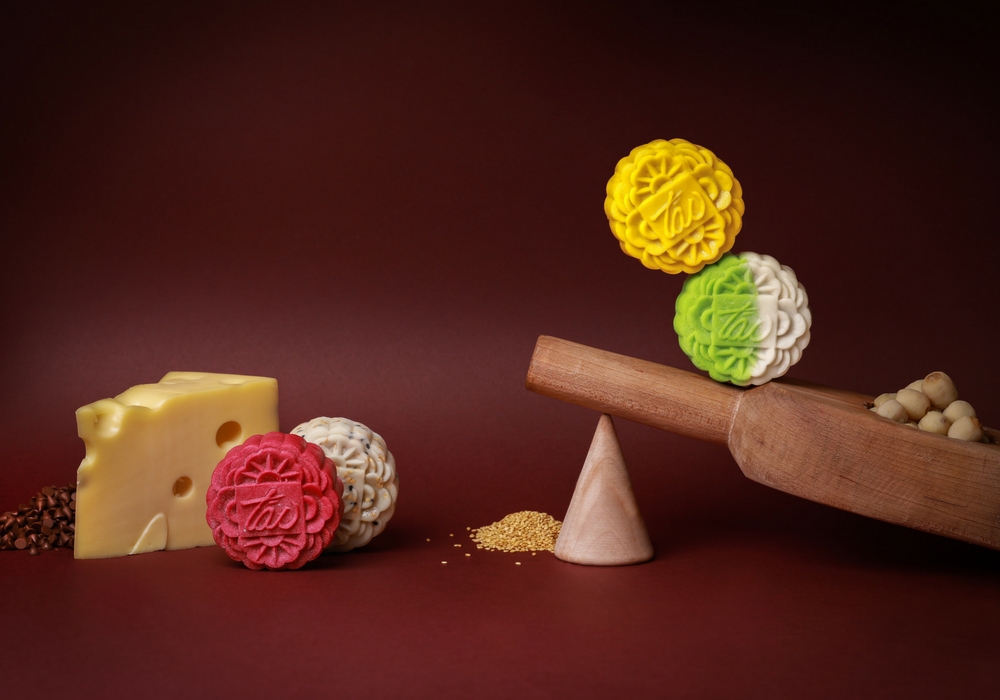 10 most delicious mooncakes to indulge in this year

It’s that time of year again when the heavens are raining mooncakes down on us for the Mid Autumn Festival. These treats, as delicious as they are, are packed with calories, so you may want to carefully select the box that’s deserving of overdosing on your daily calorie intake.

The mooncake making process is a long and arduous one. The history behind this pastry spans centuries, but this round “Chinese cake” was initially created as an offering whilst worshipping the moon during the 15th day of the eighth lunar month. The tradition slowly evolved, deviating away from worshipping the moon and more towards celebrating the auspicious date where kids play with lanterns, and adults exchange mooncakes as gifts.

In modern times, chefs are beginning to deviate from traditional flavours, and experimenting with more exciting ones like durian, rose, cheese, chocolate, ice cream, and also champagne. Instead of baking, they also tried different styles of presenting the modern flavoured mooncakes by using a snow skin crust made of glutinous rice, typically eaten cold.

Today, not only are mooncakes made to be a delightful gift for your loved ones, they have also become a delicacy of their own with a variety of flavours and designs. It’s hard to pick the best flavours to try, which is why we’ve listed 10 of the most delicious mooncake flavours to indulge on. 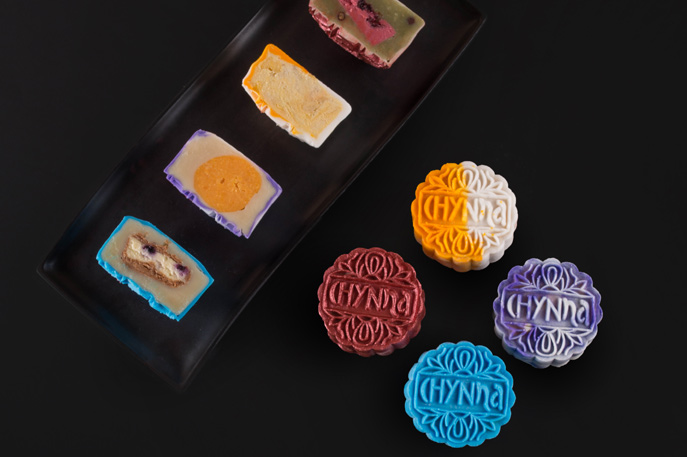 The Roselle Ruby is this year’s signature mooncake from Hilton Kuala Lumpur. Wrapped in chic metallic red snow skin, the mooncake has a pistachio paste complemented with bits of macadamia nuts, lotus seeds, and chocolate crunch. At the center you will find the roselle, which exhibits a delightful tangy, sour flavour to offset the creaminess of the paste. 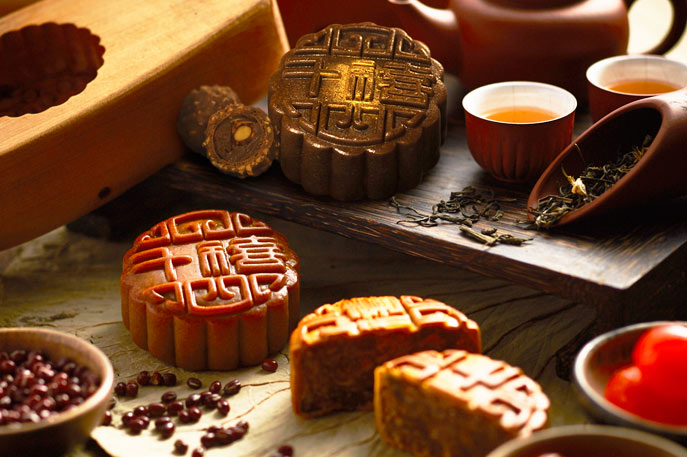 One could never go wrong with chocolate, especially when it’s Ferrero Rocher. Grand Millennium Kuala Lumpur‘s signature mooncake this year comes in a rich brown colour with gold dusting in the middle, this mooncake features the iconic Ferrero Rocher chocolate ball as the center of the mooncake, while the paste is thankfully, not chocolate so as to not give you an overkill of Ferrero Rocher. 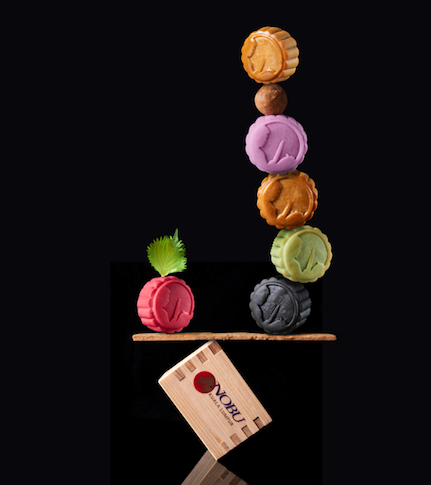 Mooncakes get a Japanese twist at Nobu Kuala Lumpur this year. We were particularly drawn to the Mochi Skin Miso Yolk with Pandan Paste. While we’re used to the regular salted egg yolk as the center of the mooncake, Nobu does a twist with the miso yolk, lending an interestingly savoury taste that complemented the pandan-flavoured paste. 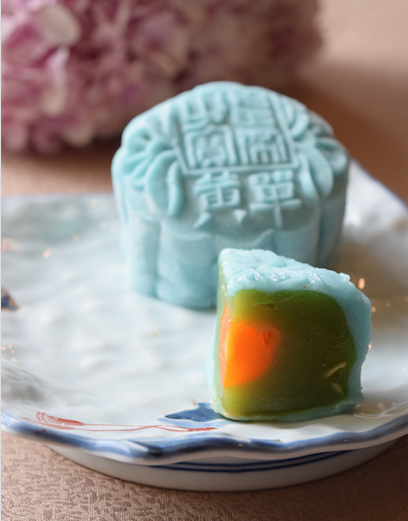 Dorsett Grand Subang takes the quote “once in a blue moon” quite literally and created a delightfully pale blue snow skin mooncake. Visuals aside, the flavour melds modern and traditional nuances with the inclusion of pandan and lotus paste with a single yolk. Pandan is not traditionally used as a flavouring in mooncakes, but the taste itself is familiar to Malaysians, which is why it was a great combination. 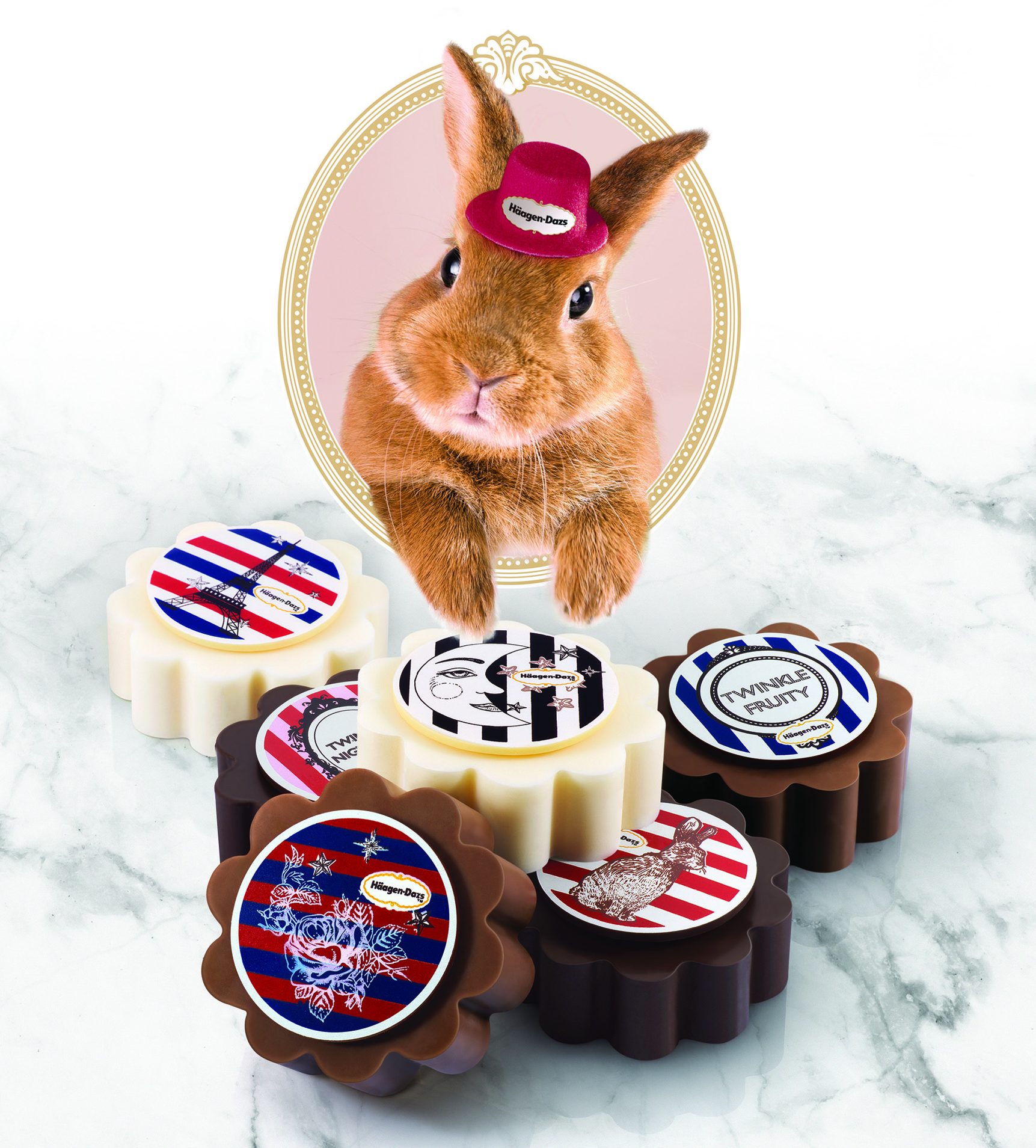 When you’re not a fan of the regular mooncake but still want to join in the occasion, turn towards Häagen-Dazs for their ice cream mooncakes. They’re designed to look so much like the traditional mooncake that they even have the “yolk centers”, albeit in flavoured ice cream form. One classic favourite that you can never go wrong with is the Belgian Chocolate flavour, which guarantees 100% satisfaction and richness. 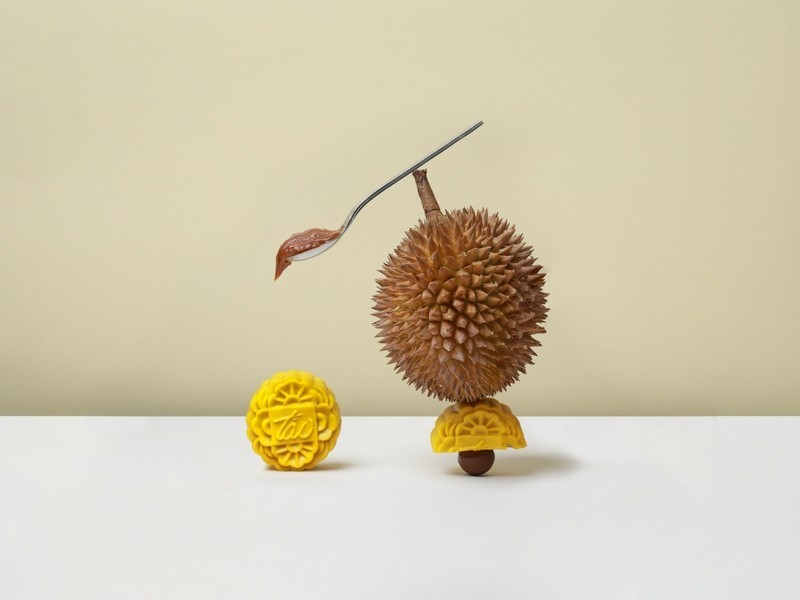 Snow skin durian mooncakes are a match made in heaven — the soft texture of the casing goes beautifully with the creaminess of durian. But far from being the usual durian mooncake, InterContinental Kuala Lumpur has created a version that promises a different twist — pure durian with salted caramel chocolate. It might sound odd but consider this: the decadent flavours of durian actually goes extremely well with the sticky-sweet caramel chocolate center, offset with the tinge of saltiness. 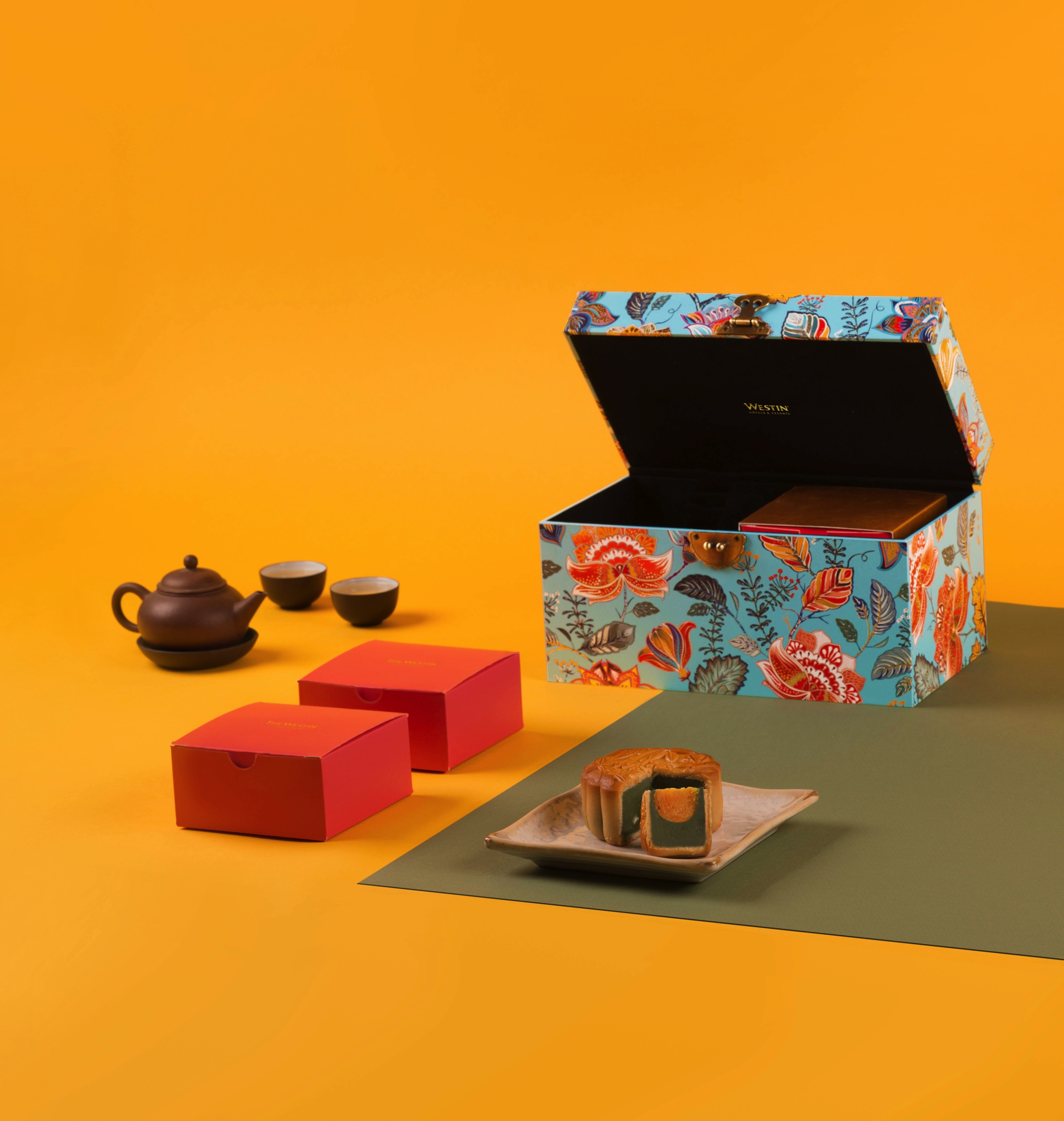 So we’ve already featured a pandan lotus mooncake above, but this one from Westin Kuala Lumpur is different — instead of snow skin, it’s the traditionally baked mooncake. The pandan flavours are stronger and deeper after being baked, and the salted egg yolk complements the otherwise cloying sweetness of the pandan flavour. 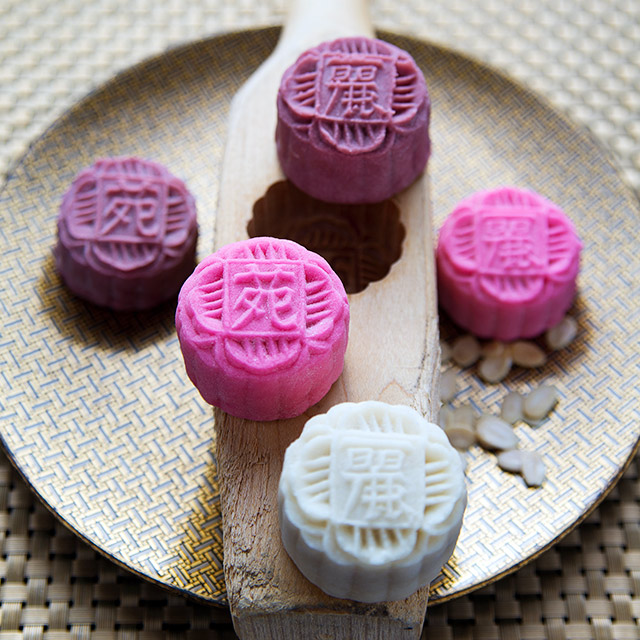 When you’re feeling fancy and up for some champagne, try The Ritz-Carlton Kuala Lumpur‘s Moët & Chandon Rosé Imperial Champagne Mooncake. It comes in a mini size so as to not overwhelm your palate, but we love how the fizzy rosé taste is evident in the paste without actually tasting too weird. It’s refreshing and an interesting one to add to your palate. 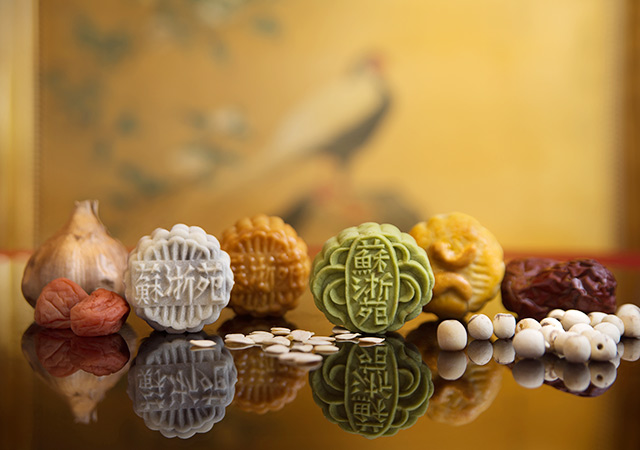 Having a mint flavouring in mooncakes is a rare find, but you’ll be able to get it at JW Marriott Kuala Lumpur with no problems. The snow skin custard paste with mint is as refreshing as it sounds, with the creamy custard having cool tinges of mint. If you’re looking for a mooncake flavour that is delicious without being too cloying, this is it. 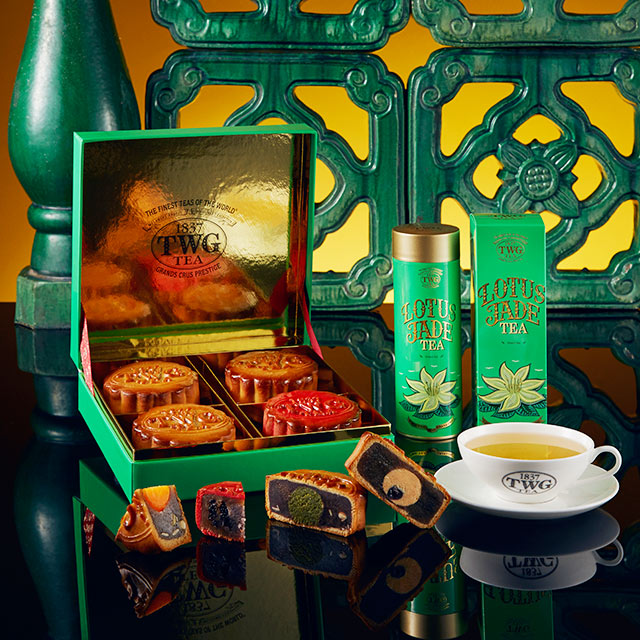 Tea lovers might want to sit up for this: TWG Tea is releasing mooncakes again this year, and our eyes zeroed in on the Cerise. The white chocolate mooncake has a coconut and Amarena cherry center, while its brown lotus paste is infused with Pu-erh 2000 tea. If you love your Chinese teas, you should certainly try the Cerise for a subtle smoky taste.