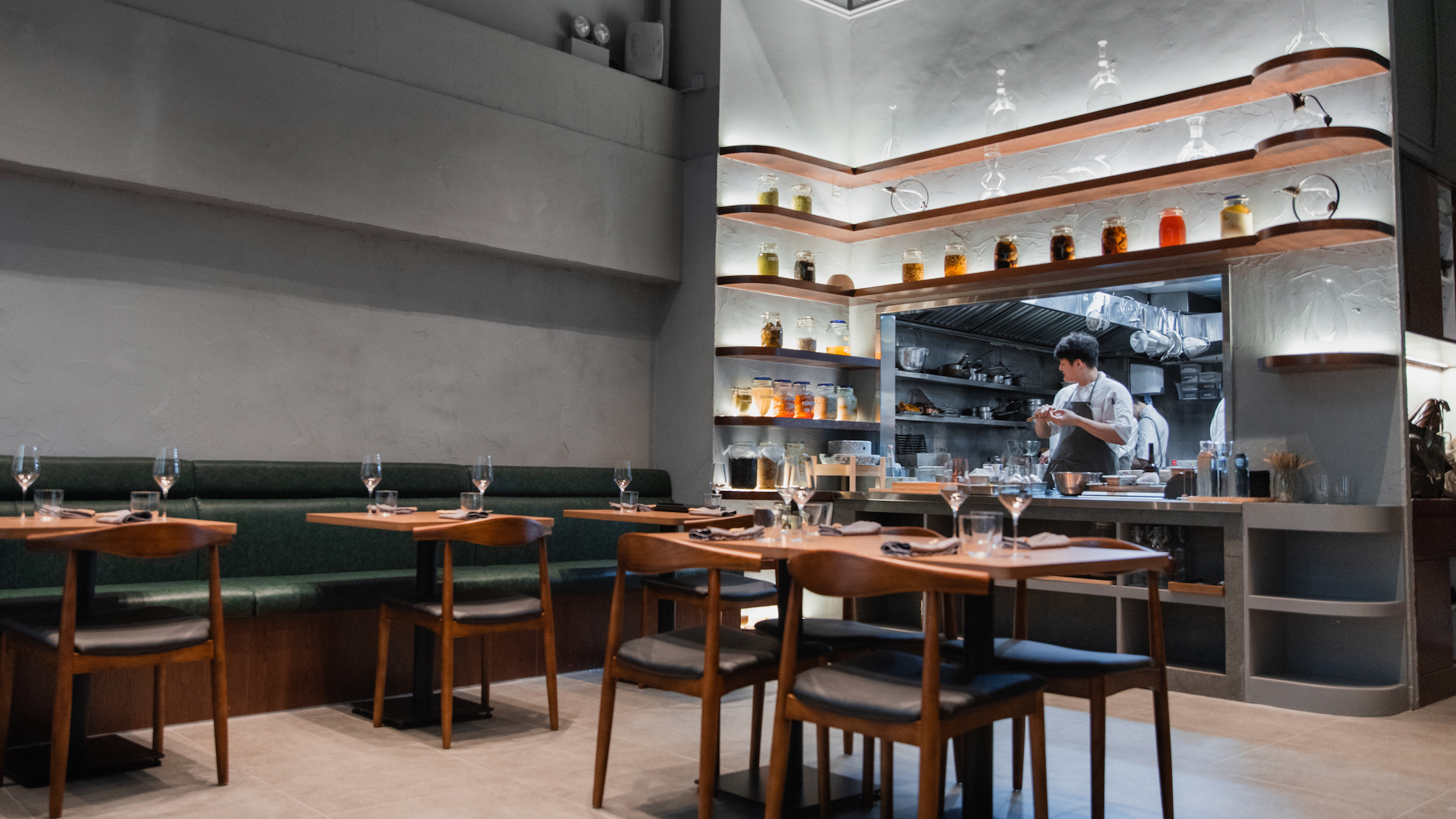 Allow me to offer a loosely held (albeit strong) opinion: some two years after surreptitiously arriving on the backstreets of Kau U Fong, Beet remains one of the most underrated ‘casual fine diners’ in Hong Kong. That isn’t to say that it’s a floundering enterprise — the consistently buzzy stream of mid-week diners proves that — but one does get the sense that were it some heavily tatted Scandi edgelord cooking with the ascetic, ingredient-elevating precision of executive chef Barry Quek, we’d be unable to stop raving about it. All things being equal, it feels timely to revisit Beet, which just reopened its doors following an intensive one-and-a-half month renovation.

Devotees of the restaurant’s previous incarnation are sure to notice immediately what has changed: the oversized, roughhewn wooden dining table — suggesting Beet’s relaxed, communal atmosphere — has been removed; whereas the previously cyan-coloured upholstery is eschewed in favour of shades of forest green. Couples seeking intimate quarters are in for a treat, as the bank of tables closest to the room’s T-shaped support column has been transformed into a semi-private nook — flanked by two oak partitions that are as much an aesthetic flourish as they are practical.

The diner-style kitchen remains intact (with most of its upgrades confined to equipment), though your gaze is now more likely to wander in that direction thanks to glossy new shelving which juts overhead. (The latter is used to store an assortment of decanters, preserves and picked vegetables — the latter two of which figure prominently in chef Barry’s dishes.)

The net effect, achieved with the aid of DEFT Studio, is the preservation of Beet’s familiar warmth and spatial integrity. It’s not a dramatic makeover — the seating layout is more or less the same, just a tad cosier — but the interplay of brown-on-green and the elevation of foodstuffs (to the status of visual motif) are great pretexts for a re-examination of the space.

The change in Beet’s interior palette might well be read as a metaphor for the transition out of summer — bringing with it a revamped seasonal tasting menu. A handful of chef Barry’s enduring staples return this fall (e.g. Hokkaido scallop, A4 Miyazaki beef), dressed in the livery of local veg that has just entered its optimal harvesting season, but regulars know to pay close attention to the dishes which seem — at least on paper — to be conspicuously unremarkable.

An all-new starter of bitter melon and celtuce, dusted with heaped shavings of cucumber granite makes for an elliptic tastebud test. Then there are the hefty vegetarian mains — a discus of roasted jicama, topped with wild mushrooms and savarin — that reflect chef Barry’s ongoing interest in humble taproots, cooked in a manner that is heightened enough to convince diners to vault the safety net of expectation. In short: Beet is back, and if you’ve been neglecting a visit since 2017, there’s no time like the present to discover what you’ve been missing.