Want to know where you can get the best waffles in KL and PJ?

It’s hard to deny that many, if not most of us, have a sweet tooth. When it comes to dessert, it’s just really hard to say no. Ice cream is always a popular choice; pancakes are another popular item; and of course, who can forget cendol? A local favourite that everyone will be familiar with.

Now, those are just some of the popular dessert choices one can have around town. This time, we’ll be placing focus on waffles and where you can get them around KL and PJ. There has always been a debate between which would one prefer: waffles or pancakes? And the correct answer is, why can’t we just have both?

These days, you will find more and more cafes carrying waffles in their brunch menus, introducing a classic American staple dish — fried chicken and waffles. While this was popularised through pop culture references towards Roscoe’s House of Chicken and Waffles, it has since transcended into more than just an American meal. It’s not uncommon anymore to see the combination of fried chicken and waffles bathed in maple syrup.

But having waffles on its own is also considered a treat. For many Malaysians especially, their first memory of waffles would probably be the A&W fast food version with vanilla ice cream. With that said, it’s safe to say that waffles do play an integral part in our daily consumptions, even if it’s bad for you.

Be sure to scroll down to check out where you can find the best waffles in both KL and PJ. 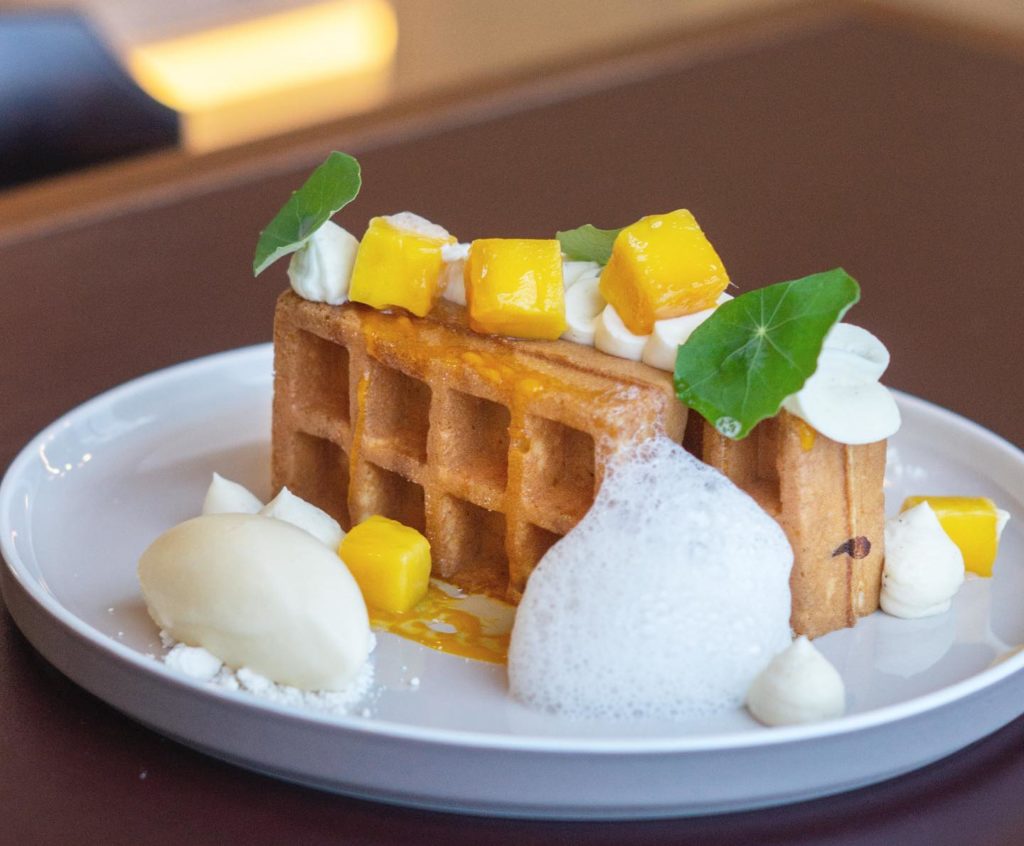 By now, many know Entier as the go-to place for casual fine dining with authentic French influences. Its ala carte and tasting menu have been raved about since its inception but don’t sleep on its weekend brunch menu as well. Entier brings waffles into the mix with two dishes for its starter and main. First up is the ‘Liver & Waffle’ featuring chicken liver pâté, fermented mango, and crispy chicken skin set atop a French waffle. Next up is the ‘Duck & Waffle’ with a whole duck leg confit, sautéed foie gras, fermented jackfruit, and a sunny-side-up egg. Of course, it’s topped off with a French waffle and drizzled with a ginger glaze. 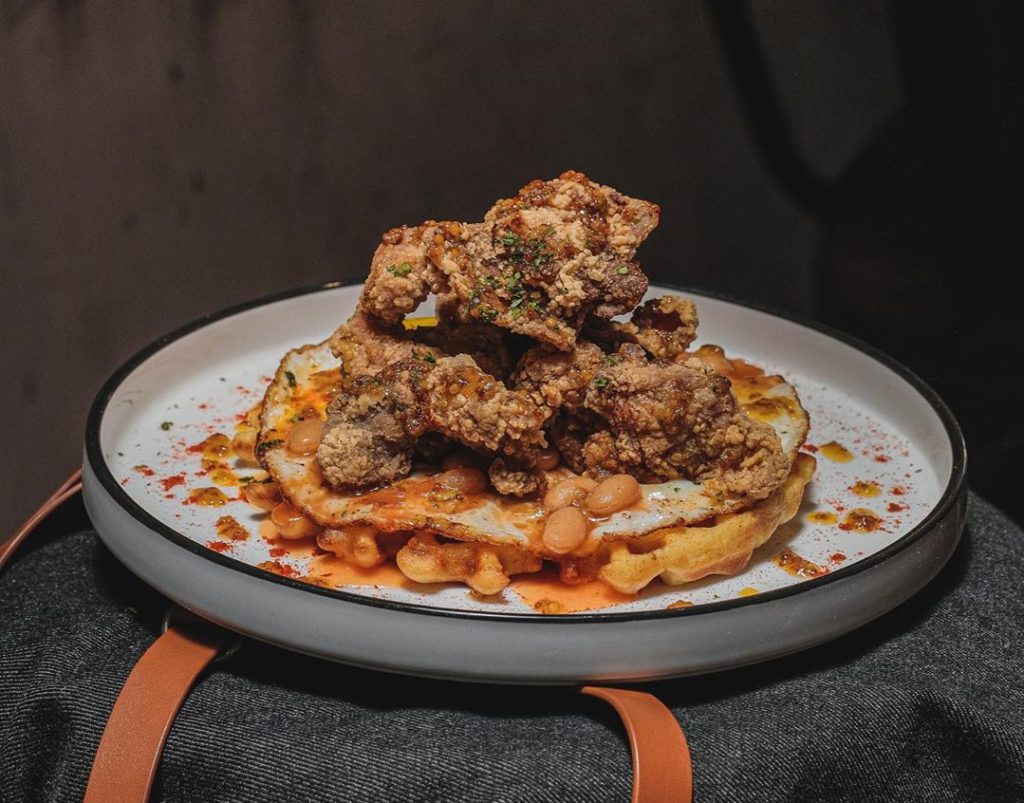 Having already made a name for itself in Penang, Urban Daybreak brings its expertise to Jalan Telawi in Bangsar. Being at the heart of all things brunch, Urban Daybreak shows why it’s up to the challenge with its menu. It offers an entire section dedicated to waffles, toasts, and pastries. Its ‘Fried Chicken & Waffles’ is a signature of Urban Daybreak, bringing crispy chicken karaage together with waffles alongside baked beans, a fried egg, and maple syrup. The ‘Waffles at its Best’ is another popular choice with spicy pork stew with baby spinach and red onion salad. 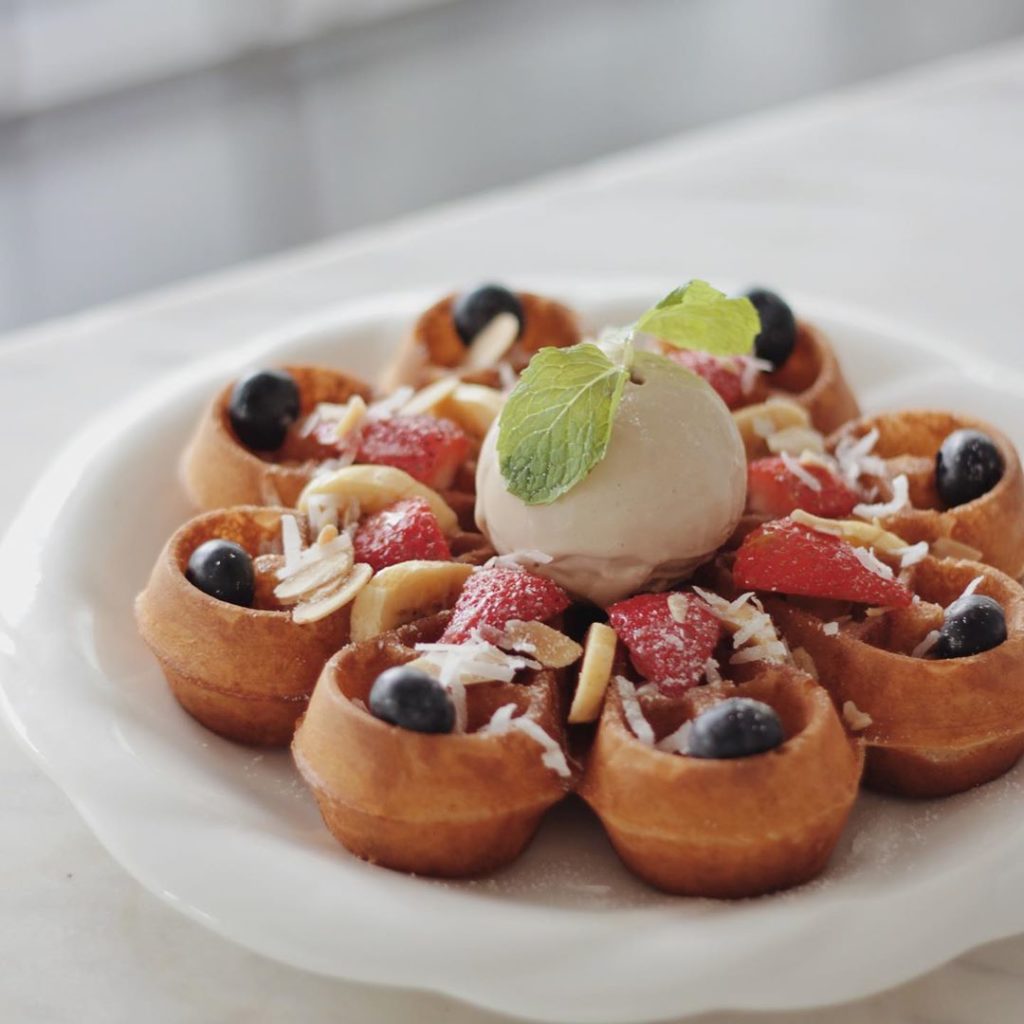 Having been around for over five years, The Owls Cafe has made a name for itself as the place to be for brunch and desserts. With already four outlets spanning across KL and PJ, we have to take it back to the OG location at Bukit Jalil. The shape of its waffles are also out of the ordinary; its floral pattern makes it much easier to eat as opposed to the conventional rectangular shape. Whether it be for hearty and savoury meals or something a little sweeter, The Owls Cafe has that with all of its waffles. 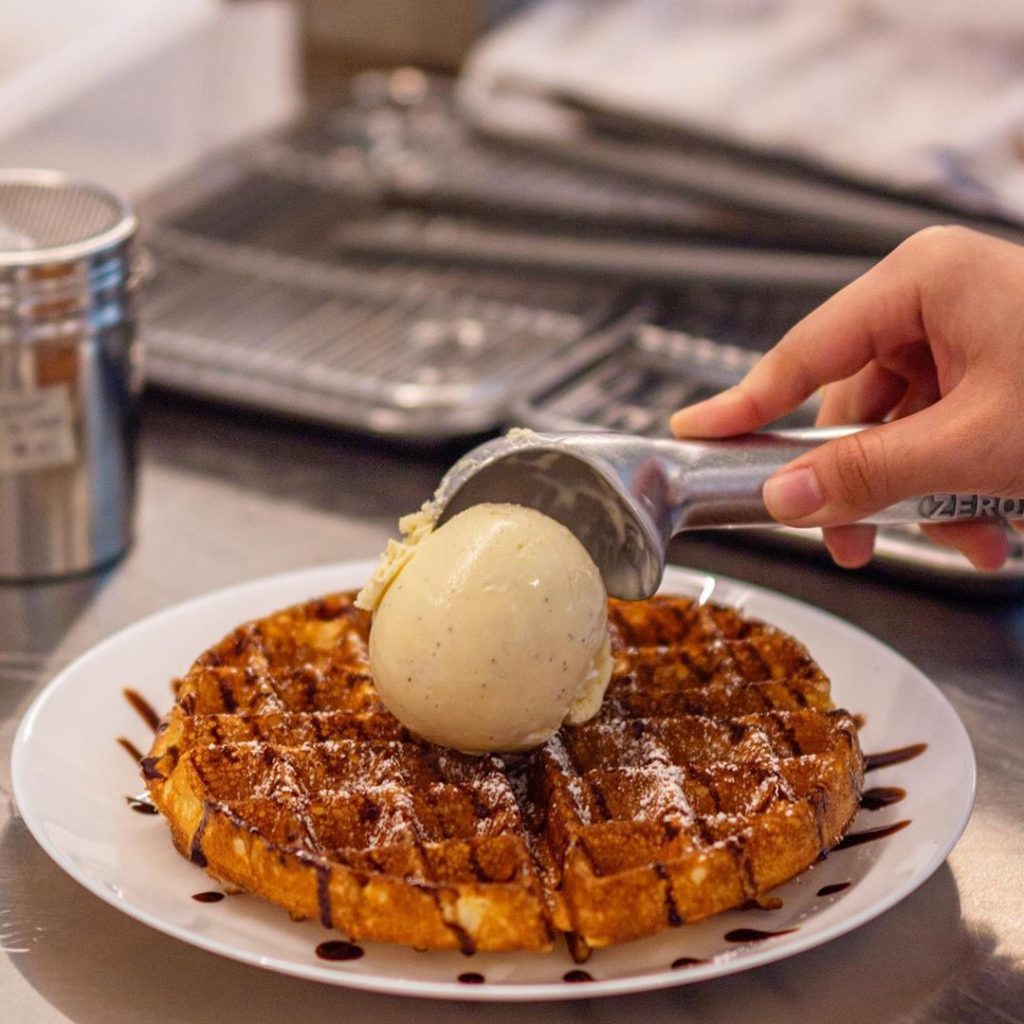 For dessert waffles, one can only think of Inside Scoop, the popular local ice cream parlour. With already multiple locations all over, you need not venture far to find the nearest outlet. Serving up delicious flavours with local ingredients, Inside Scoop pairs its ice cream together with its homemade waffles in two flavours — buttermilk and charcoal. Inside Scoop also offers a great selection of sauces and other condiments to go with your waffles and ice cream. 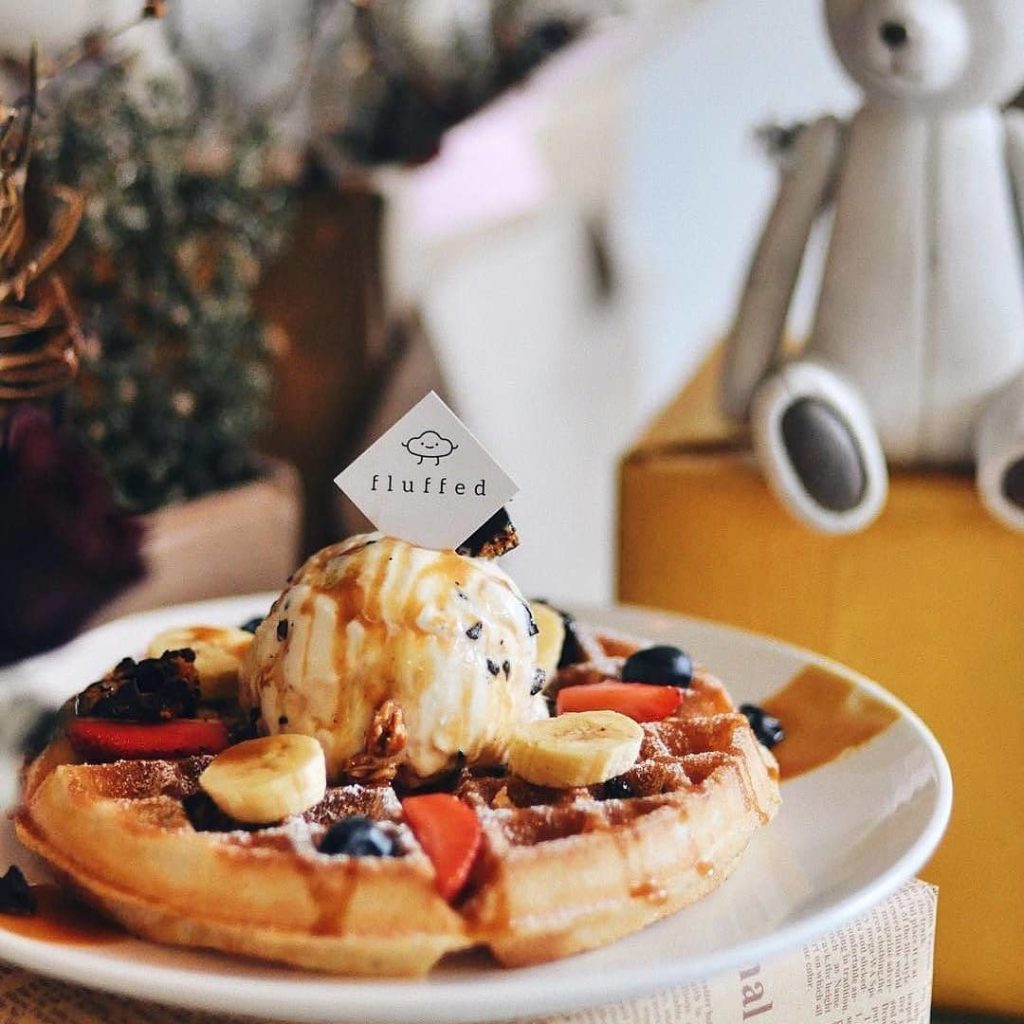 When it comes to cafes that specialise in desserts, Fluffed Cafe & Dessert Bar should be one of the frontrunners on your list. Having been around for quite some time now, Fluffed has amassed a loyal following with its many different types of cakes, homemade ice creams, as well as waffles. This is available in its original, pandan, charcoal, and cocoa form with plenty of add-ons to choose from. This includes sauces like salted caramel, kaya, and blueberry compote, as well as toppings like chocolate soil, praline, and almond, crumble to name a few. 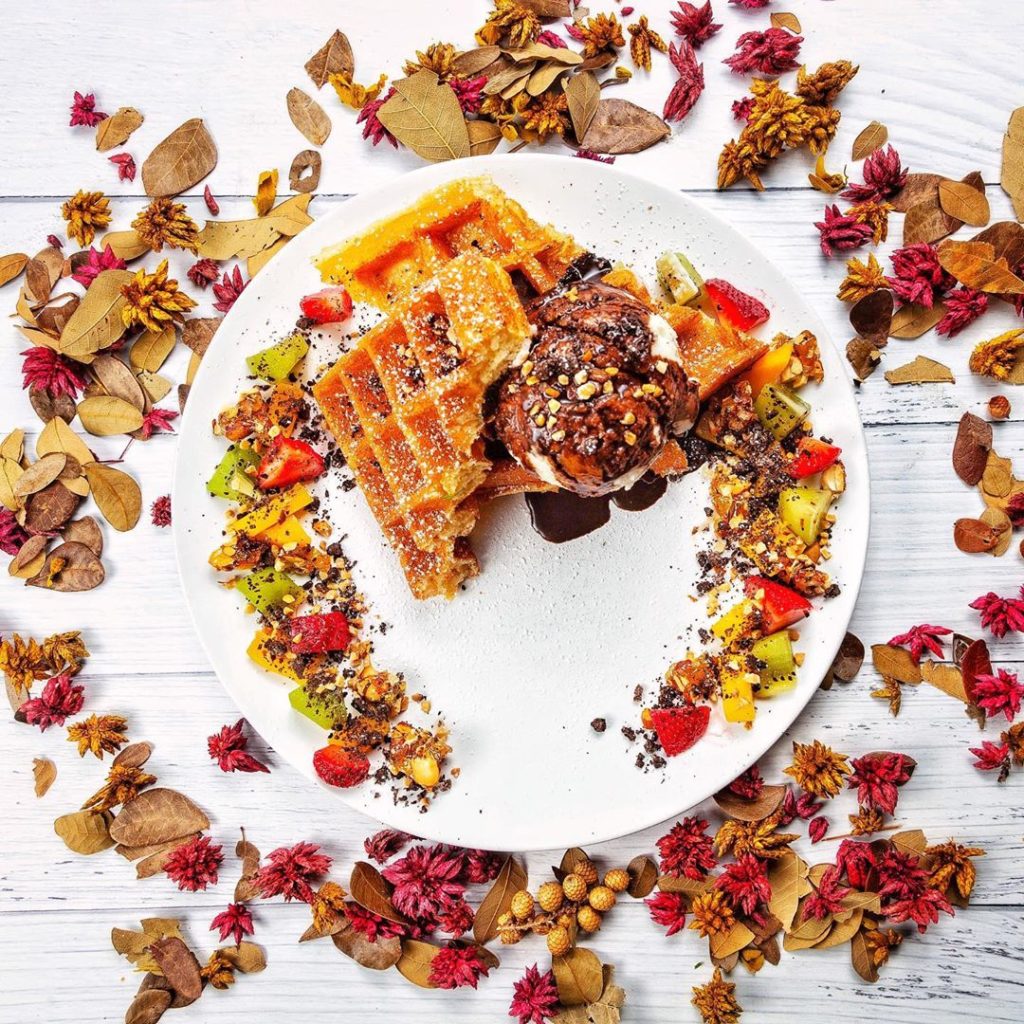 Serving up comfort American food, Chequers is all about providing great food in a comfortable ambience. Chequers prides itself on its authentic take on good-ol’ fashioned American dishes with waffles being a key player on the menu. ‘Smoked Duck Waffle Flatbread’ is a new addition to the menu while it also features an entire portion of the menu dedicated to savoury waffles. From your basic chicken and duck combination, Chequers also goes off the rail with other pairings like pulled barbecue beef as well as Mexican fried chicken. Dessert is another smorgasbord of choices where you can also choose to create your own pairing with waffles. Starting out with just home-churned ice-cream and having its own parlour at one point, Pun’s Ice Cream now has its own restaurant at Damansara Jaya. Of course, it didn’t leave behind its signature items, which includes the aforementioned sweet treat as well as its fried chicken and waffles. You can have it with your ice cream as well if you’re not looking for something too savoury.

Waffles what to eat in kl what to eat in pj
You might also like ...
Food & Drink
What’s a cloud kitchen? We ask Cookhouse founder, Huen Su San
Food & Drink
Four Seasons KL combines gastronomy and theatre with a new menu at Curate
Food & Drink
Halal steakhouses and where to find them around KL and PJ
Food & Drink
Bite into these delectable lobster rolls around KL and PJ
Wi-Liam Teh
Senior Writer
Wi-Liam is a geek at heart with a penchant for tattoos. Never without a drink in hand (preferably whisky, gin, or Guinness), he is also a writer by day and a keyboard warrior by night. On his day off, he masquerades as a streetwear and sneakerhead enthusiast while his bank account says otherwise.
Tech Cars Watches Entertainment Food Drinks