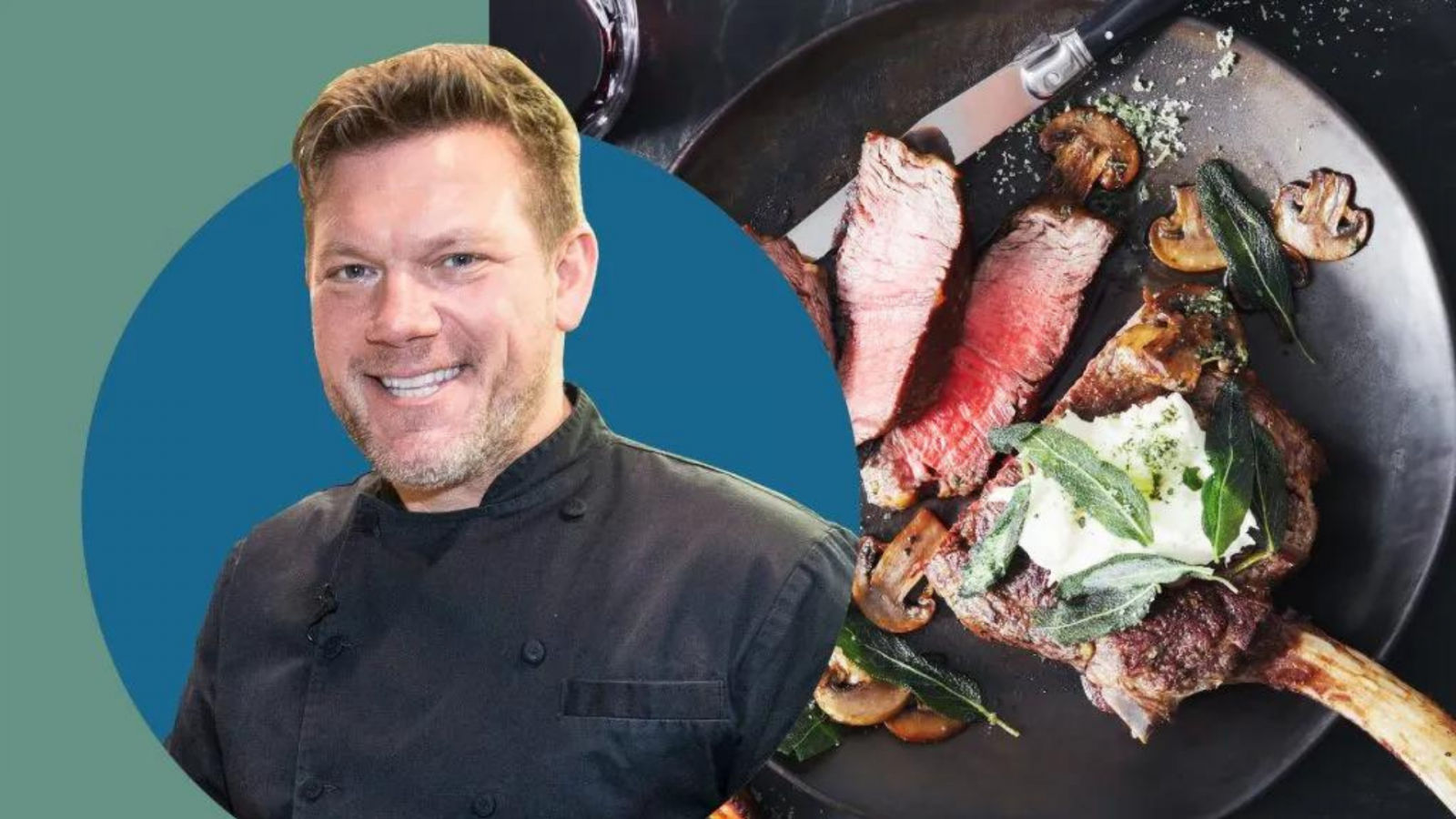 Tyler Florence reveals his secrets to cooking the best steak

When it comes to steak, chef Tyler Florence says he wants to create an experience so good it will ruin you for the rest of your life. Florence, who in late 2021 opened the Miller & Lux steakhouse in San Francisco (he’s really trying for a Michelin star with this one!), shared his secret steak recipe for achieving perfection at the 2022 Food & Wine Classic in Aspen.

Florence’s love of steak started when he was a child. Growing up, he loved going to The Peddler Steakhouse in his hometown of Greenville, South Carolina, where he could eat his pick of steak cuts.

The chef, who now calls California home after a pit stop in New York, says he loves reinventing classics to make them even better. “I like to take Americana to the next level,” Florence explained to the audience at the Classic as he showed them how to make a 32-ounce (907 gm) Tomahawk steak, one of his signature steaks from the restaurant.

Here are Florence’s secrets for cooking the best steak like a pro at home.

Dry-ageing is a technique that has been around since before refrigeration. You can buy dry-aged meat at a butcher shop or even try dry-ageing meat at home. Florence notes that dry-ageing has surged in popularity in the last 10 to 15 years, less as a method of preserving meat and more as an appreciation for the artistry of the craft. Plus, it makes meat taste amazing! When meat is dry-aged, it is exposed to circulating cold air. This process gently dehydrates the meat, which concentrates its flavour.

The longer meat is dry-aged, the more flavour it develops, but longer isn’t always better. Florence recommends dry-ageing meat for 38 to 45 days — more than that and you just get what he calls a “big beefy raisin.” As the meat ages, enzymes (the same found in the mould on Roquefort cheese, Camembert cheese, or salami) on the surface break down carbohydrates, proteins, and fats and transform them into what Florence calls “something spectacular.”

For his cooking demonstration at the Classic, Florence chose a bone-in, 46-ounce (1,304 gm) Tomahawk ribeye rack, a dramatic cut that makes for an impressive centrepiece at a dinner party. The animal was grass-fed and grain-finished on barley, resulting in lots of marbling in the meat. Starting in July, customers can order one of these amazing dry-aged Tomahawk steaks and have them delivered straight to their homes.

2. Wrap the bone in Foil

Broilers in the oven get extremely hot, but if you want to have a beautiful presentation, you don’t want to burn the bone while the meat cooks to perfection. Wrap the Tomahawk bone in a piece of foil so it doesn’t get too dark.

3. Start with a hot sear

Florence emphasised the importance of getting a hot, hard pan-sear on all sides of the meat to help develop that all-important crust as the proteins and amino acids meld and fuse. Wait until the oil in your pan is shimmering and is just starting to smoke before adding the steak. The searing happens quickly; it takes just three to five minutes per side.

At home, you can finish the steak in a 204°C oven to medium rare. At the restaurant, he likes to cook it under the broiler.

While grilling might seem like an ideal way to cook a steak, it’s not Florence’s preferred method. “There is so much natural beautiful flavour [in the meat], I don’t want to cover it up with the flavour of smoke from the grill,” he explains. If you grill your steak, he advises searing the meat over high heat and then moving it away from direct heat and cooking it to the desired temperature over cooler, indirect heat, rotating the steak as it cooks.

4. Give your steak a butter bath

Go ahead and gasp (ooh! ahh!) but after the steak reaches the desired internal temperature, let it rest in a bath of clarified butter with herbs and garlic. Why, you ask? Instead of resting it on a plate where it is exposed to air, you can get more beautiful fat (aka, flavour) in the meat by filling a large pan or baking dish with warm butter and a few sprigs of herbs like thyme and rosemary, and then gently spooning the butter over the steak as it rests. The steak’s hard dehydrated surface — which makes such a gorgeous crust — is actually porous, so it will absorb more buttery fat as it rests.

When it’s time to carve your perfectly cooked steak, unwrap and discard the foil covering the bone, and slice the meat right off the bone. Then place the bone on your serving platter, and cut the meat into three different parts: the eye, cap, and tail; each has a different texture and flavour profile. Place slices of the eye meat along the back curve of the bone. Tuck the cap, (Florence’s favourite part) into the curve of bone. Finally, arrange slices of the tail next to the cap meat toward the outside of the platter. Florence likes to salt the cuts and sprinkle them with fresh chives before drizzling the meat with extra-virgin olive oil — what he calls “California steak sauce.” Want to take it over the top? Florence likes to shave truffles on top (this is a nice flourish done at the table). He serves his Tomahawk steak with homemade Bearnaise sauce, Caesar salad, pommes puree and creamed kale.