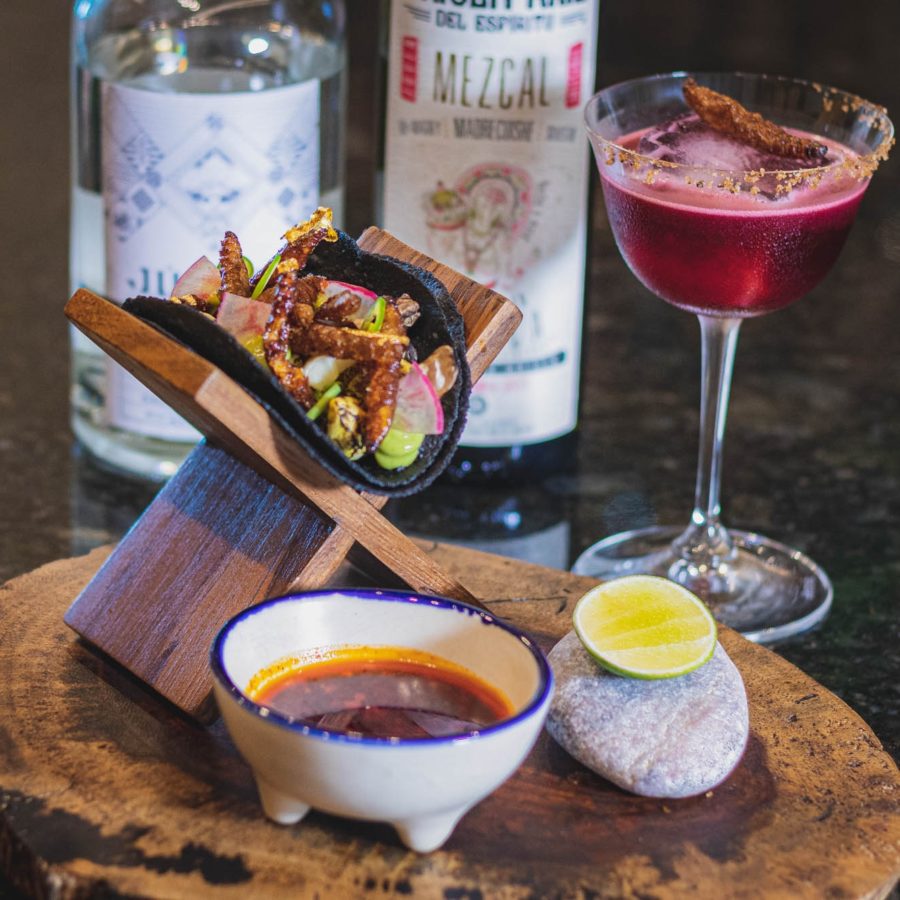 Food & Drink
How to introduce Sal de Gusano, the savoury Mexican worm salt, into your dishes
Share this article
Next article

As we sat at facing the sunset at The Treetop, One & Only Mandarina’s spectacular outdoor bar perched high atop a cliff in Mexico’s Riviera Nayarit, mixologist Iván Aguilar delivered a bowl of freshly cut orange slices topped with a heavy dusting of a reddish spice alongside our tiny cups of mezcal. “Take a sip,” he instructed, “then bite into the orange.”

We did as we were told — and an explosion of salty, spicy flavour ensued, bringing out the floral, slightly earthy notes of our joven (young) mezcal. Like the tradition of following a shot of tequila with a lime wedge and salt, enjoying this experience with mezcal is to drink as the Mexicans do, Aguilar said. The reddish spice we tried? It’s called sal de gusano, and while it was new to us, it’s been used in Mexican cooking (and drinking) for hundreds of years.

Farmers in Oaxaca realised that the red worms living on the leaves of their agave were slowly killing the plants, so they started removing them by hand. Bugs have long been a staple in Aztec and Mayan gastronomy—including chicatanas (winged ants) or chapulines (grasshoppers) tucked into tacos, or worms added to the bottom of tequila or mezcal bottles–so it only made sense to repurpose the worms into something useful, and flavorful.

To make sal de gusano, farmers remove the worms from the agave and leave them to dry in the sun or toast them in a hot oven, says Aguilar. Then, they’re mixed together with chiles and sea salt, ground up, and placed in the sun again to dry for two or three weeks. The result? A red spicy salt you can use to accent everything from cocktails to ceviche.

“Right now, it’s a big movement. Every mezcal brand is making sal de gusano also,” says Aguilar. This salt can span from a little spicy to wow-that’s-hot, leaving a lingering burn in your mouth — quenched only by more mezcal or tequila, of course. (The salt we tried, a highly spicy variety made by a brand called Alacran in Oaxaca)

While sal de gusano has gotten easier for consumers to buy, what’s difficult is sourcing the worms, says Victor Palma, executive chef at Conrad Punta de Mita. Not only do the worms have to be hand-harvested, but “in some occasions, they can be scarce even in Mexico,” he says. Normally the worms only appear on agave plants during the rainy season, which lasts May through July.

Palma sources sal de gusano from the central Mexican state of Hidalgo to incorporate into the agave tasting experience at Conrad Punta de Mita, in which it complements lesser-known spirits made from agave such as raicilla and sotol. “The flavour profile of the agave plant can vary between smoky and herbal depending on its origin, so we add ingredients to the worm salt that match the flavour profile of the spirit,” says Palma, who also uses the whole worms in food. He describes the taste of these as meaty and similar to crunchy fish skin. “We use them to make worm tacos… filling a warm, fresh-made tortilla [with fried worms] and topping with a blended sauce of roasted tomatoes, onions, chiles, garlic, sea salt, olive oil, and cilantro.”

Stateside, bar director Chris Chernock of the L.A. staple Broken Spanish, which closed due to the pandemic in August 2020 and has now re-emerged with a residency at NeueHouse Hollywood, works closely with small importers who source sal de gusano from local farmers in Oaxaca. Chernock serves orange slices topped with sal de gusano alongside pours of mezcal and also uses it to rim fruit-forward cocktails like the spicy El Zocalo, made with mezcal and passionfruit. “The saltiness paired with chilis and dry worms creates an addicting umami flavour that is often enjoyed even by people unfamiliar with worm salt,” Chernock says. “The balance of sweet and bright citrus paired with [the salt] is quite lovely and keeps you wanting more.”

Carlos Gaytan, the first Mexican chef to earn a Michelin star, now running Tzuco in Chicago, also sources sal de gusano from Mexico to accent his dishes such as smoked scallop ceviche. He makes a popular Mayan-style fish dish, Tikinxic (pronounced teesh-ee-neek) by marinating mahi-mahi in achiote and sour oranges, wrapping it in banana leaves, and grilling it in a wood oven before finishing with a little tomato-avocado salad and sal de gusano.

Though he’s used worm salt in cooking as long as he can remember, growing up in Huitzuco, Mexico, Gaytan says he’s “absolutely” noticed it getting trendier. “A lot of chefs travel to Mexico City, Oaxaca, or other cities so they can utilize a lot of ingredients that we use,” he says.

Beyond sal de gusano, Gaytan is introducing more Mexican ingredients to American diners in subtle ways at Tzuco— for instance, grasshoppers, which he serves toasted on top of guacamole as an appetizer. One newcomer he draws the line at, though, is scorpion salt, a next-level progression of sal de gusano. “I can’t handle the flavour; it’s too overpowering,” he says.

As for Aguilar, he’s all about offering a wide range of tastes for guests to The Treetop. In addition to worm salt, he stocks the bar with ant salt and cricket salt, and he’s working on adding scorpion salt, too. At the beginning, [some people] are kind of scared to try it,” he notes, “but they always [do], and they realize it’s not that bad.”