Malaysians are a proud bunch and there is nothing we get more protective over than our food. This was recently highlighted with a certain ‘crispy’ chicken rendang, a controversy that sent shock waves around social media.

We made it very clear – if you mess with the traditionalists, there may be a call to arms. With one or two exceptions it is also one of the reasons why our food has never really been presented in an experimental fashion. For a restaurant or chef to succeed, it would require unforgiving skill and talent.

Travel
Check out: Ipoh, the other food capital of Malaysia

Nadodi is one such restaurant that has caused a stir in the KL dining scene since it opened in March 2017. It is at the forefront of changing our perceptions on local cuisine, predominantly the southern Indian fare that we are used to.

On our second visit to the most interesting and daring restaurant in Malaysia for their anniversary menu, Nadodi yet again proved that when you couple an unwavering expression of flavour with technical finesse, the line between food and art begins to blur.

The introduction to this  journey could not have been more spectacular. Aside from the incredibly delightful bites of Vada, filled with lentil and coconut chutney and the Kiri Bath – a snack made with rice and an anchovy sambar and rolled into a crispy pastry – the statement piece was clearly the Banana Leaf.

A chlorophyll-based false meringue was shaped to look like a traditional banana leaf meal including dotted portions of sides like tamarind and ginger, daal and poppadom and mango pachadi. It condensed a major aspect of what we know to be Southern Indian cuisine into a single bite and succeeded in both its artful cheekiness and its eruption of flavours.

The texture was crisp, clean to the bite as you might expect from a French or Italian amuse bouche but the aroma and aftertaste takes you back to your local Indian restaurant — filling your vision with loud waiters, curry soaked fingers and sweltering kitchens.

These elegant, light bites were immediately followed by a heavy meaty duo of smoked Spanish prawn skewers — served with a homemade tomato pickle sauce — and rabbit meat floss placed in a samosa tart atop pomegranate and radish.

The intensity of these flavours cannot be understated, although certainly not overwhelming. They were a sharp contrast to the dainty vegetarian ingredients we had been ushered into our meal with. The rabbit for example had been cooked in Nadodi’s signature 18-spice blend until tender before behind pulled apart. The dishes were going to toy with our palettes and it was certainly the right way to feed our curiosity for what was to come as well as our appetites.

Unlike the coconut water soup that came later on in the meal and certainly not as memorable, this was a successful vehicle to refresh us for the following revelations but the boldness of ingredients made it so much more than an ordinary palette cleanser. Accompanied with coconut and peanut espuma, and finished with pickled beets, we were being reminded that although the motions might be that of a fine-dining restaurant, your journey is still going through Tamil Nadu and Kerala. Nothing drove home this fact more than the heavy punchers yet to come.

It is usually a mark of laziness when you see old items taking centre stage in new exciting menus but Nadodi’s fish head curry was welcomed back with arms — and mouth — wide open. Served in a mug with layers of steamed trout, curry and fried flat rice, this dish is a flawless execution in balancing textures, crispy and creamy and will have you licking your spoon clean. It is the quintessential example of doing local food in a way that is daring in technique yet uncompromising in flavour profile. 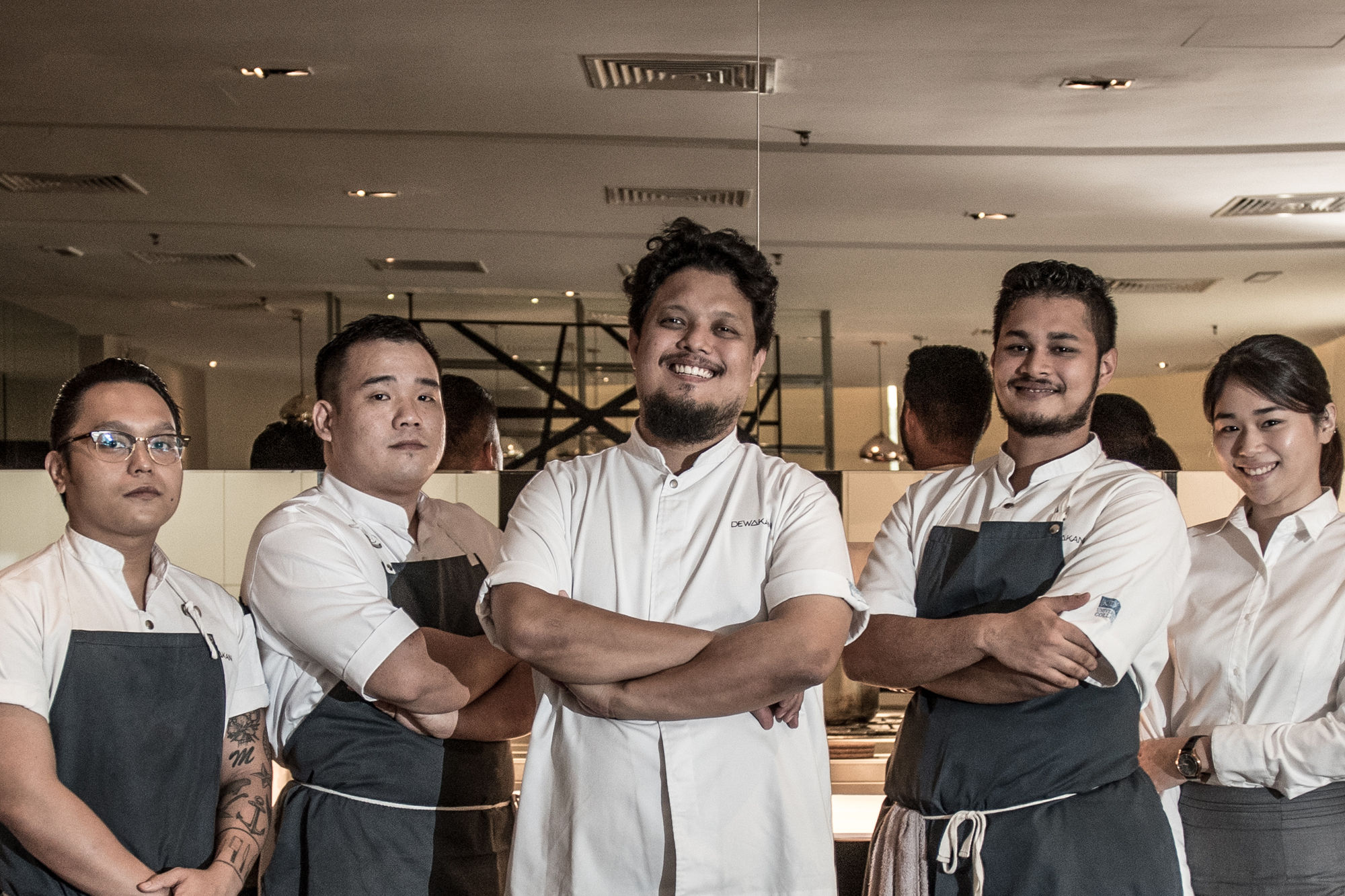 It is hard for any kitchen to follow up on such a strong offering and therefore the grilled chicken with a miso-caramelised pearl onion, may have suffered from its unfortunate position in the line up. The coconut smoke fell short of having any real impact on the meat and left you craving ‘Ayam Percik’ instead.

On the other hand, the Australian lamb chop served on a bed of tart tamarind chutney was sensational. Brimming with juices, it showcased how the sous-vide technique is arguably be the best way of cooking lamb. Served with a crispy tempura-styled Rosella leaf, the divergence in flavour could not have overjoyed the palette more.

As a final act for the main courses was the signature ‘Nomad’s Globe.’ Unpacking it, we found a top layer offering a salad made with shredded Alaskan crab and a mixture of turmeric, onions, ginger and garlic. The middle portion contained a traditional biryani cooked with apricot, raisins, prawns, saffron, crispy shallots and cashews. Last and by no means least, a lobster Chettinad curry thick with coconut milk and under spiced to allow the real flavour of the lobster to come through. This entire dish could have been a meal on its own and firmly rooted us in our seats, sedate and satiated, once devoured with over excitement.

Stuffed would be an understatement but there’s always room for dessert. A modern twist on the classic Putu Mayam was served with a Sodhi ice-cream, sweet-coconut based sambar crumble and a red rice Idiyappam — all made for a delightfully nostalgic course.

However, yet again another firm favourite from the last menu stole the show even right at the end. ‘Textures of Milk’ is a fine illustration of the restaurant’s bold experimentation. The dish offers up several ways in which a simple ingredient like milk can be deconstructed, remoulded and presented in vastly different fashions. The most memorable were the Palkova, a cultured yogurt, whipped with honey curd, next was a creamy ‘dulce de leche’ paste that had us scraping the plate Finally, a heaped spoonful of buttermilk snow, icy to the touch and with a pleasant tart aftertaste.

If you can believe it, somehow a pistachio cotton candy floss as well as a date-flavoured fruit leather shaped into butterflies were managed to also be squeezed in. It takes a long time to get through the entire journey especially when paired with the tasting menu of superb cocktails but there is a further danger of being left comatose for long after in your chair in pure heavenly bliss.

What makes wagyu beef so expensive?