Peek no further to find the best peking duck in town

Duck is one of the more popular meats to be used in Chinese dishes. This is especially true during grand occasions like birthdays, anniversaries, and weddings. Peking duck is usually the go-to choice when it comes to how a duck is prepared during Chinese dinners and it is done with an air of extravagance.

It has a storied history, stemming from China since the Southern and Northern dynasties. However, it wasn’t until the Ming Dynasty did it truly hit its peak and became one of the main dishes on the imperial court menus. By the time the Qing Dynasty rolled around, peking duck became one of the most prominent dishes for the upper classes of China.

During the mid-20th century, peking duck hits full circle as one of the most popular dishes in all of China. Beijing, in particular, is home to two notable centuries-old establishments. These places are known as Quanjude and Bianyifang, both of which have made its name with two contrastingly different styles of preparing peking duck.

The former uses the hung oven roasted method while the latter utilises what is considered to be the oldest form of cooking — closed oven roasting.

Over the years, Malaysia has also seen a rise of many well-known establishments that are catering to a new wave of food enthusiasts. Be sure to scroll down to take a look at the pecking order of the restaurants around town that are known for its peking duck. 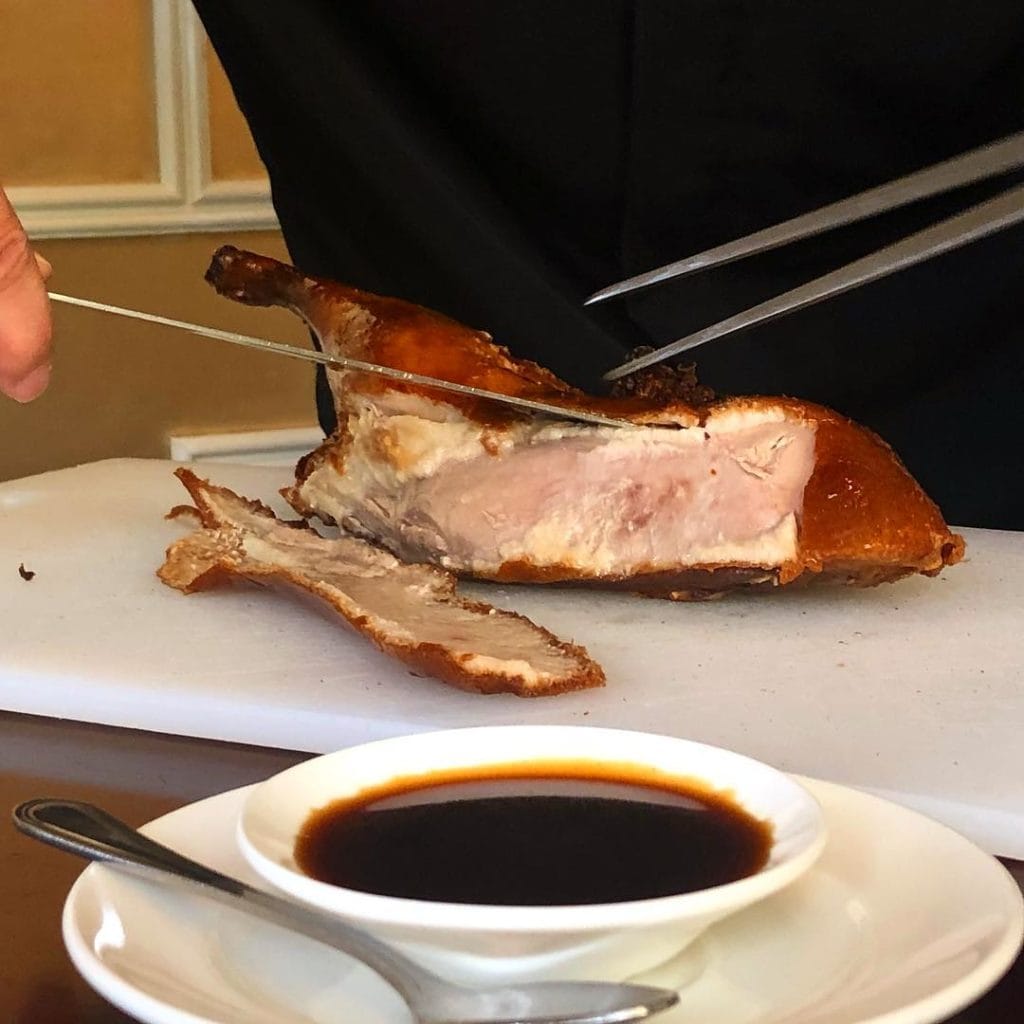 Lai Po Heen is one of the more appreciated restaurants in KL with its elaborate décor coupled with its classic Cantonese dishes. It’s located within Mandarin Oriental hotel in the heart of KL and is particularly famous for its dim sum. However, be sure to not overlook its peking duck, which is prepared in its very own traditional roasting oven. The peking duck at Lai Po Heen is also best enjoyed cucumber scallions wrapped in a thin pancake and topped with its very own homemade hoisin sauce. Sheraton Imperial KL is one of the oldest hotels in KL to this date. Fresh off a massive facelift, the hotel is back and kicking while its Chinese restaurant, Celestial Court is back in full force. It specialises in Chinese cuisine with plenty of favourites to choose from and in particular, its dim sum. Besides that, Celestial Court is also famous for its golden peking duck. Eaten in a thin pancake roll, it consists of generous helpings of peking duck backed up by its condiments to further enhance its flavour. Tao Chinese Cuisine is another upscale Chinese restaurant that is located in another popular hotel in the heart of KL. InterContinental Kuala Lumpur is known for many things, especially when it comes to its restaurants. Aside from Tatsu Japanese Cuisine, Tao Chinese Cuisine is famous for bringing the oriental tidal wave to our shores. Its traditional peking duck is perfectly roasted and it can be paired with extravagant condiments like truffles, foie gras, and even eringi mushrooms. Marco Polo Restaurant has been around for close to 40 years, incorporating traditional Cantonese cuisine with various dishes from other regions. It is also a popular place for wedding receptions as Marco Polo Restaurant comes with its very own banquet hall, capable of seating hundreds comfortably. In terms of its food, its peking duck is a no-brainer with plenty of crunch and mouthfeel with every bite. This also makes Marco Polo Restaurant one of the few restaurants around KL that serves peking duck while not being situated within a hotel. Oriental Pavilion is part of the Oriental Group, a premier group of restaurants that specialises in fine Cantonese cuisine. Oriental Pavilion is the flagship establishment located in Jaya 33 that focuses on serving traditional Cantonese cuisine with a modern twist. It is also the most popular dim sum restaurant in all of PJ while also being the only place on this list that is not located in KL. Of course, its peking duck is equally famous as well, which is meticulously prepared table side before being served individually.

Kuala Lumpur Where to Eat in KL peking duck Petaling Jaya where to eat in pj peking duck in kl peking duck in pj
Wi-Liam Teh
Senior Writer
Wi-Liam is a geek at heart with a penchant for tattoos. Never without a drink in hand (preferably whisky, gin, or Guinness), he is also a writer by day and a keyboard warrior by night. On his day off, he masquerades as a streetwear and sneakerhead enthusiast while his bank account says otherwise.
Tech Cars Watches Entertainment Food Drinks