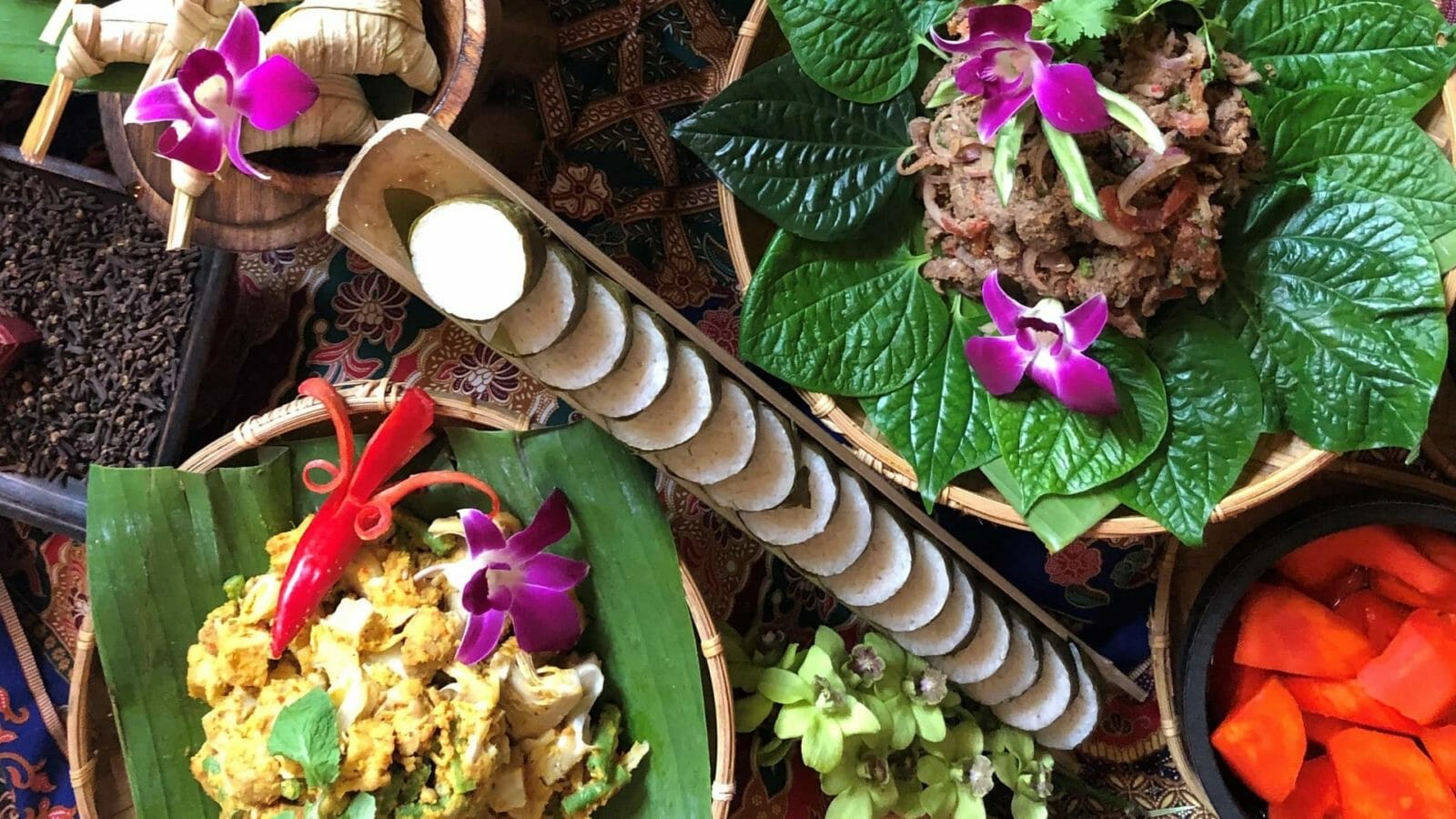 Traditional Pahang cuisine encompasses a heavy use of seafood, thanks to its close proximity to the South China Sea and a booming fishing industry in the state.

From the sea, there is an abundance of seafood byproducts like salted fish, fermented krill, shrimp paste and more. From its rivers and lakes come the freshwater fish like the silver catfish, or locally known as ikan patin.

Unbeknownst to many, the food hub of Pahang is hidden in its royal capital, Pekan. It is common to find gulai dishes like Gulai Tempoyak Patin (a turmeric fish curry cooked with fermented durian), Gulai Asam Rong (a sour and slightly bitter watered down curry made of processed rubber tree fruits) and Gulai Patin Asam Rebus (a sour and spicy simmered fish soup flavoured with tamarind).

Besides traditional ones, Pekan is also known for foreign dishes that are prepared with a distinctly Pahang style like Murtabak Mengkasar (pan-fried pastry with egg and meat stuffing) and Puding Diraja (‘Royal Pudding’).

Puding Diraja has always been a favoured dessert served only in the royal palace, and is made using bananas, prunes, urat emas (golden strands made of cooked batter akin to lace pancakes) and custard.

What makes Pahang cuisine so special is the way the people in the state preserve their cooking through the many generations. They are very proud of the unique flavours of the cuisine and so far, it is a style of cooking that has yet to be commercialised.

It is also safe to say that Pahang cuisine has quite an acquired taste, especially with the use of fermented ingredients thanks to the influences from surrounding Malay ethnic groups.

When the cuisine received its royal seal from the Sultanate of Pahang, the palace took the liberty to protect and preserve the state’s specialty food.

Since then, Pahang royal cuisine has become one of the most coveted cooking styles that can be found in the state. Sometimes, one can find these dishes being served in Malay restaurants in Kuala Lumpur but on very rare occasions.

With the permission of Her Majesty Seri Paduka Baginda The Raja Permaisuri Agong Tunku Hajah Azizah Aminah Maimunah Iskandariah Binti Almarhum Al-Mutawakkil Alallah Sultan Iskandar Al-Haj, the Queen of Malaysia, Mandarin Oriental Kuala Lumpur has been given the honour to present the Royal Cuisine of Pahang, especially for the holy month of Ramadhan.

Food & Drink
Your definitive guide to Ramadhan buffets in KL

When it comes to the royal cuisine of Pahang, gulai dishes are obligatory. It is also crucial to sample freshwater fish like catfish and ikan patin that are either grilled or cooked in a curry-like stew.

If you’re a fan of laksa, Laksa Pahang is the state’s own iteration that is served with chopped herbs and a yellow fish-based gravy. It is also compulsory to finish your meal with Puding Diraja.

Here is a list of dishes you should look out for in the royal cuisine of Pahang.

Most sambals in Pahang are handmade using a mortar and pestle. Fresh produce is used with the addition of the state’s perennial spices and fermented ingredients.

Popular sambals include sambal Pahang, sambal hitam, sambal tempoyak and sambal belacan. Condiments play a crucial part in enhancing the flavours of traditional Malay dishes. These spicy additions give you the kick while complementing the mélange of flavours in each dish.

Kerabu is a common condiment in most Malay cuisine but Her Majesty has a few interesting recipes that are unique in its own special way.

These ‘salads’ feature seasonal ulam leaves like pucuk selembut, pucuk paku and pegaga. Some kerabu are flavoured with sambal belachan, while the richer ones include warm coconut milk.

The town of Pekan has its own signature dish that comes in the form of a rotisserie.

The whole bird — marinated with a bouquet of aromatics like lemongrass, kerisik, galangal, candlenut, cumin, fennel and shallots, ground into a paste and cooked with coconut milk — is roasted over an open fire until golden brown.

Some may call this dish the white curry simply by its colour. This is a unique feature in this royal cuisine.

One outstanding dish is the Ketupat Pulut Sotong — squid stuffed with glutinous rice, simmered in the white gravy. It gets its spicy flavour from black pepper and is perfumed with dried spices like clove, anise and nutmeg.

Pais is available in many other states, and it is a signature in Peranakan cuisine.

Pais is usually made using pounded fish meat or cooked with the whole piece, marinated with a mixture of lemongrass, turmeric, chilli, shallots and shrimp paste.

The dish is wrapped with banana leaf, then baked or grilled. The Pahang version uses tempoyak, creating a slightly tangy fermented quality to the dish.

Opor originates from Javanese cooking, and it has found its way into the Pahang cuisine as a watered down version of a qorma. This mild stew is cooked with coconut milk, usually with meat.

Pancakes are classic favourites enjoyed by everyone. The traditional kind has a chewier texture and the Pahang version has both sweet and savoury versions.

Mandarin Oriental royal cuisine of Pahang Sultanate of Pahang
Martin Teo
Editor
Martin has a bent for history and food culture, especially of the Peranakan heritage. Since the pandemic, he finds joy in plant parenting and continues to expand his collection of Philodendrons, Anthuriums, and Syngoniums. He's now on a lookout for the elusive Philodendron Florida Beauty to add to his urban garden.
Dining Living Home

How to make pan-fried dumplings

7 bak kwa purveyors you must know in KL, PJ, Ipoh and Penang

Where to find the best roast goose in Hong Kong, according to a local