For two years in a row, Singapore has been leading the drinking scene in this part of the world with 13 of its bars making it into the Asia’s 50 Best Bars list for 2017. Even though Omakase + Appreciate, the best bar in Malaysia, slid 31 notches down the annual ranking (from 10th in 2016 to to 41st spot in 2017), we’re still glad to know that enjoying the best cocktail concoctions in Asia is less than an hour’s flight away.

Make sure to pop by Manhattan in Regent Singapore, which emerged tops at the recent award ceremony, the next time you’re in the Lion City. The award-winning watering hole along Cuscaden Road snatched its number one title from 28 Hongkong Street, another Singapore drinking spot that ranked fourth this year. If you’re feeling extra thirsty, you might as well check out the country’s other bemedalled spots such as Atlas, Employees’ Only Singapore, Native, and Nutmeg & Clove. All these bars have entered the Asia’s 50 Best Bars list for the first time.

Hong Kong trails behind Singapore with eight bars including Quinary and Stockton, while Japan boasts six spots — five of which hail from Tokyo. From classy speakeasy joints to swanky hotel bars, here are 10 of Asia’s best bars you need to visit.

Make no mistake about it, Manhattan’s bagging the number one spot is no fluke. Before topping the Asia’s 50 Best Bars 2017 list on 21 June, this bar located at Regent Singapore had already been named the best bar in Asia after ranking 11th at the World’s 50 Best Bars last year. Its meticulously-crafted cocktail menu is inspired by the golden age of fine drinking. Try its Penicillin (a smooth and smoky blend of Monkey Shoulder scotch, honey, ginger and lemon, served in an Erlenmeyer flask) or Spectrum Punch (rum mixed with citrus-infused liqueur, lime, honey and fresh berries) cocktails, and you’ll understand why it’s regarded as a heavyweight in Asia’s cocktail scene. To get to this discreet bar, you’ve got to enter through a sliding bookcase inside a tiny yet well-lit cocktail supplies shop named Ocho: Your Bar Tools. The passage leads to the three-storey bar. While each level has a different theme, all are known to serve sophisticated, classy cocktails that get progressively more luxurious as you reach the top floor. A must-try is the eponymous Speak Low cocktail (matcha powder dissolved in premium and white rums with cherry liqueur), which won owner Shingo Gokan the Bacardi Global Legacy Cocktail Competition in 2012. Among the gems that can be found in Tokyo’s Ginza district, Bar High Five stands out the most. Run by legendary cocktail maestro Hidetsugu Ueno, this dimly-lit bar is home to a 200-strong whisky collection. You’ll love how each drink is complemented by homemade Japanese jamon. Ueno’s Bellinis, Singapore Slings, and signature Ceremony cocktail (made of whisky, green tea liqueurs, and matcha bitters) are must-tries. 4
28 Hong Kong Street, Singapore
It may have slid three notches down from the top spot last year, but this Singaporean speakeasy joint remains a leading name in Asia’s cocktail industry. Despite its attempts at secrecy (with a static website and the lack of signage above a nondescript door), it was voted the seventh-best in the world at last year’s World’s 50 Best Bars ceremony. Don’t forget to look for Planter’s Punch (a cocktail of rum, hibiscus grenadine, Darjeeling tea, citrus and bitters) on the menu.
28 Hongkong Street, No. 28, Hongkong Street, 059667 Singapore, +65 8318 0328 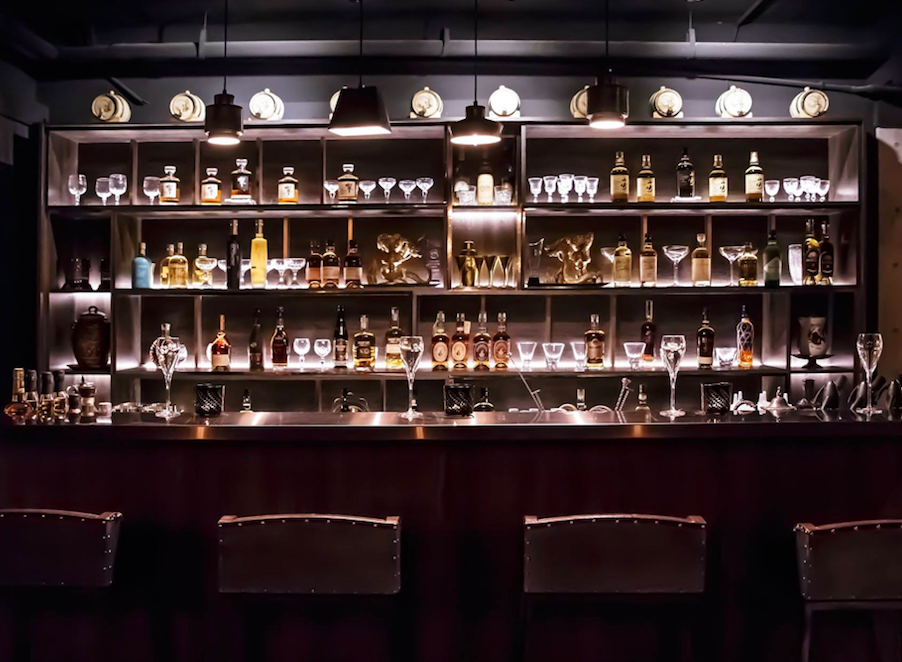 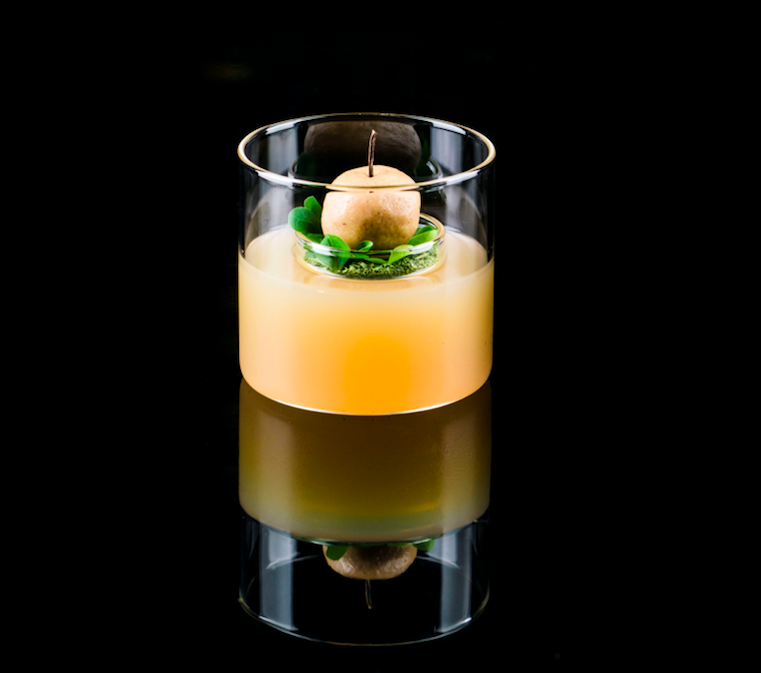 Bartender and owner Luke Whearty has built an international reputation for the exceptionally innovative drinks he serves at Operation Dagger. Last year, his unique bar — which is dramatically furnished with thousands of hanging light bulbs — was touted as the most creative bar at the 2016 Singapore Bar Awards. His signatures include the Egg, which is made of salted egg yolk liqueur, vanilla and hay. Drawing inspiration from the cutting-edge trend of molecular mixology, Quinary offers trendsetting concoctions that attempt to stimulate the five senses of drinkers. Mixologist extraordinaire Antonio Lai puts the rotovap and centrifuge to work in cocktails like the signature Earl Grey Caviar Martini, which is a mixture of Cointreau, Absolut vodka, and elderflower syrup with Earl Grey caviar. A single light bulb that illuminates a nondescript door in a small, dark alleyway off Wyndham Street serves as an entrance to Stockton. Follow a flight of stairs and it will lead you to a spacious but dimly lit bar that is reminiscent of a watering hole in the Victorian Era. It has a long list of luxurious cocktails, one of which is called the Bitter Bitch and contains liberal doses of Aperol and Angostura bitters. Shanghai mixologist Yao Lu operates this long and narrow two-storey bar located in the French Concession. It curates a list of around 20 cocktails that changes once every three to four months. Order the Banana Alexander (made of rum, cream and banana liqueur) or Waltzing Matilda (a mixture of gin, passionfruit syrup, and sparking wine) when you next stop by. 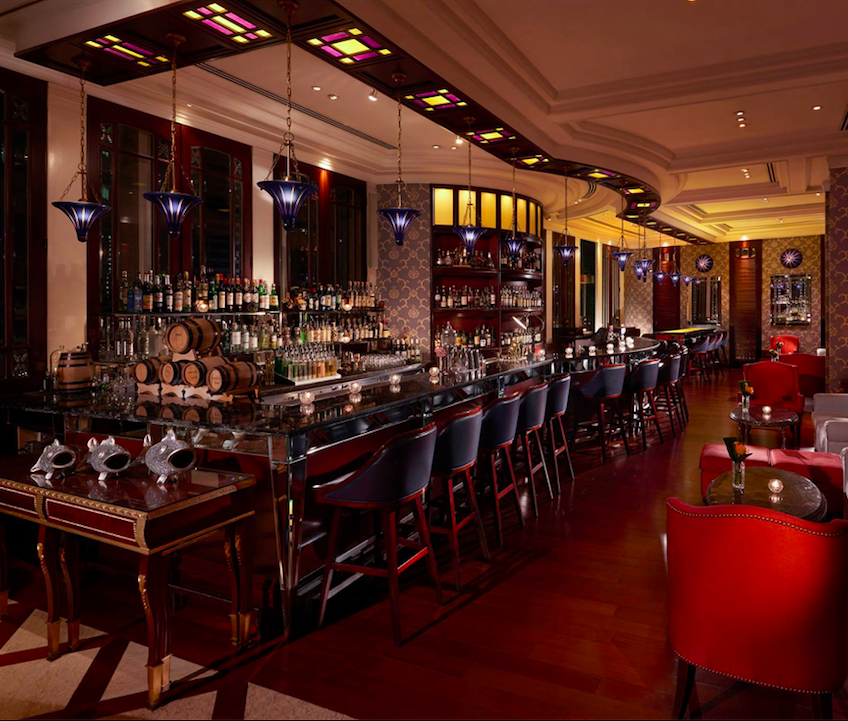 10
Lobster Bar, Hong Kong
The Island Shangri-La’s Lobster Bar & Grill is perhaps one of the most romantic dining venues in Hong Kong with its beautiful patterned wallpaper, still life paintings, and simple but elegant table settings. But more than its romantic vibe, it actually offers a solid cocktail repertoire that has made it a mainstay on the World’s 50 Best Bars list since 2015. We recommend the Rosita, a re-interpretation of the classic Negroni. This cocktail has tequila, sweet vermouth, Apérol, dry vermouth, and orange and Angostura bitters poured over a single piece of ice for a combination of flavours that’s both smooth and sharp in the mouth.
Lobster Bar & Grill, Island Shangri-La, Supreme Court Road, Level 6, Pacific Place, Central, Hong Kong, China, +852 2820 8560